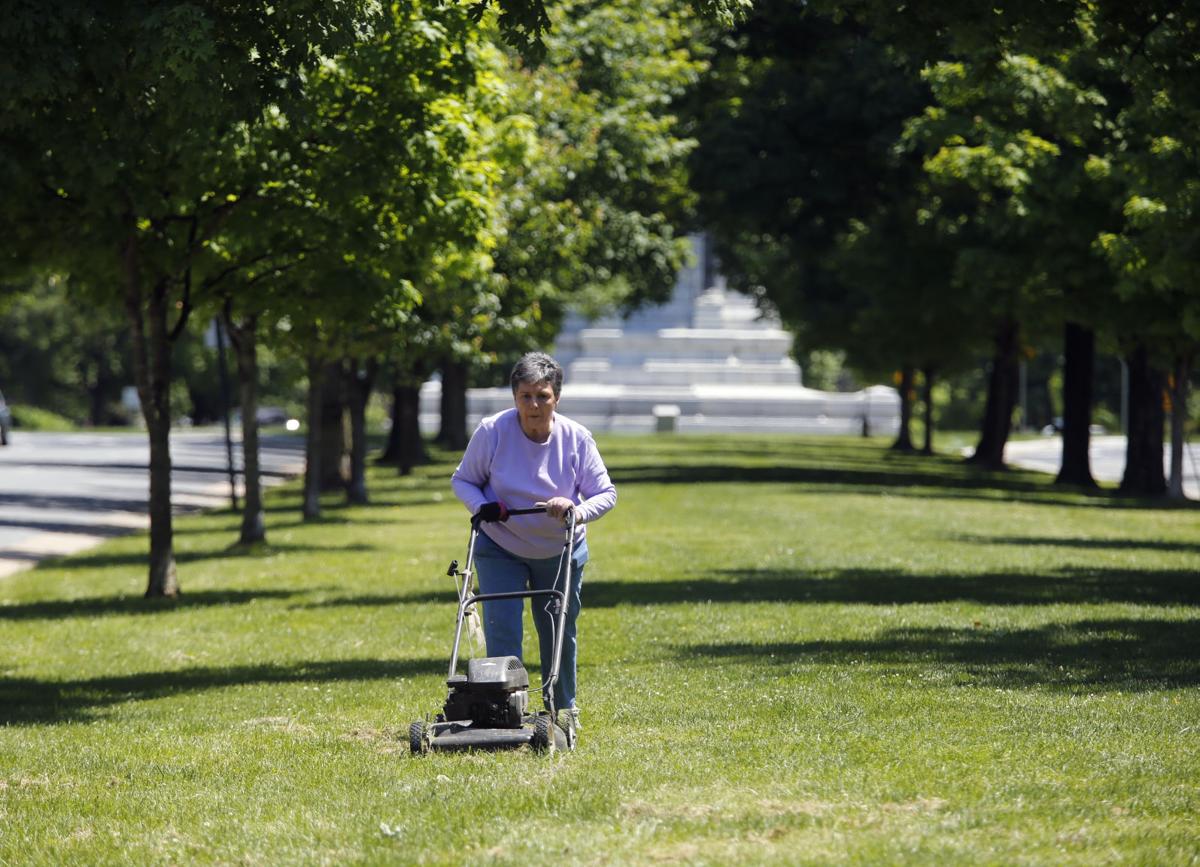 Shirley Perkins, 78, who lives in South Richmond, loaded up her lawn mower and helped the city by cutting one of the medians on Monument Avenue. She said she didn’t have permission, but said she didn’t think it would be a problem. 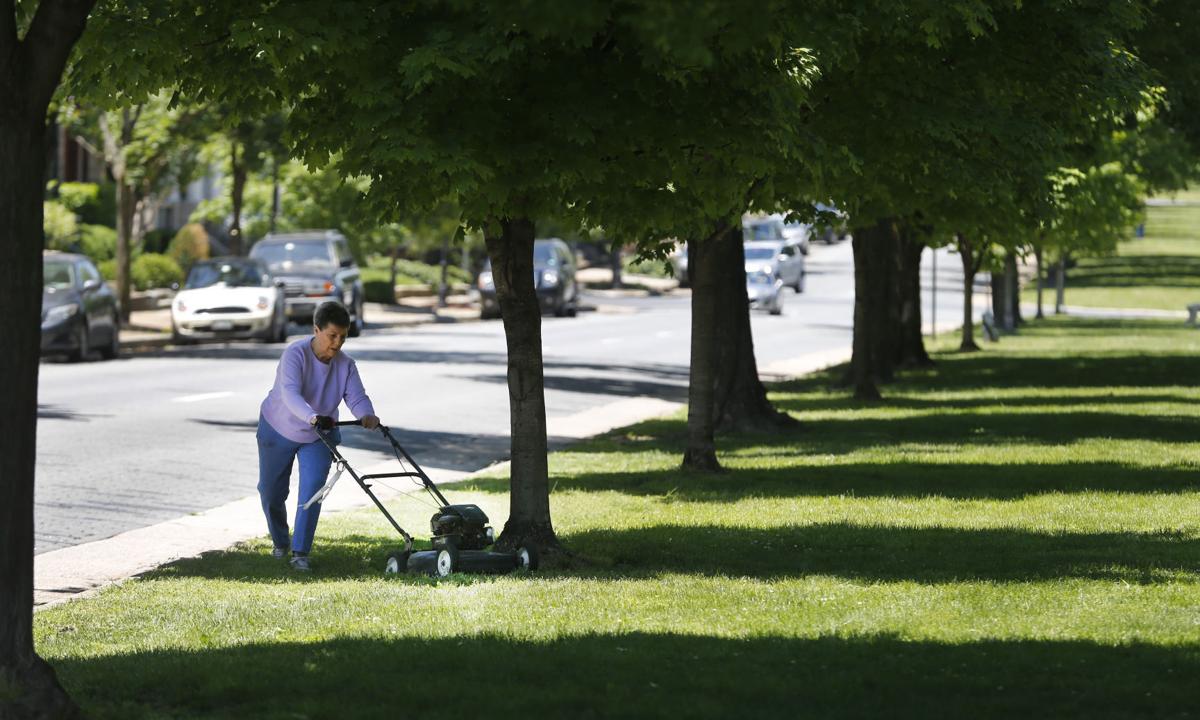 Shirley Perkins, a city resident who lives near the Pony Pasture, mows the grass in the median in the 1800 Block of Monument Avenue, Monday, May 16, 2016. 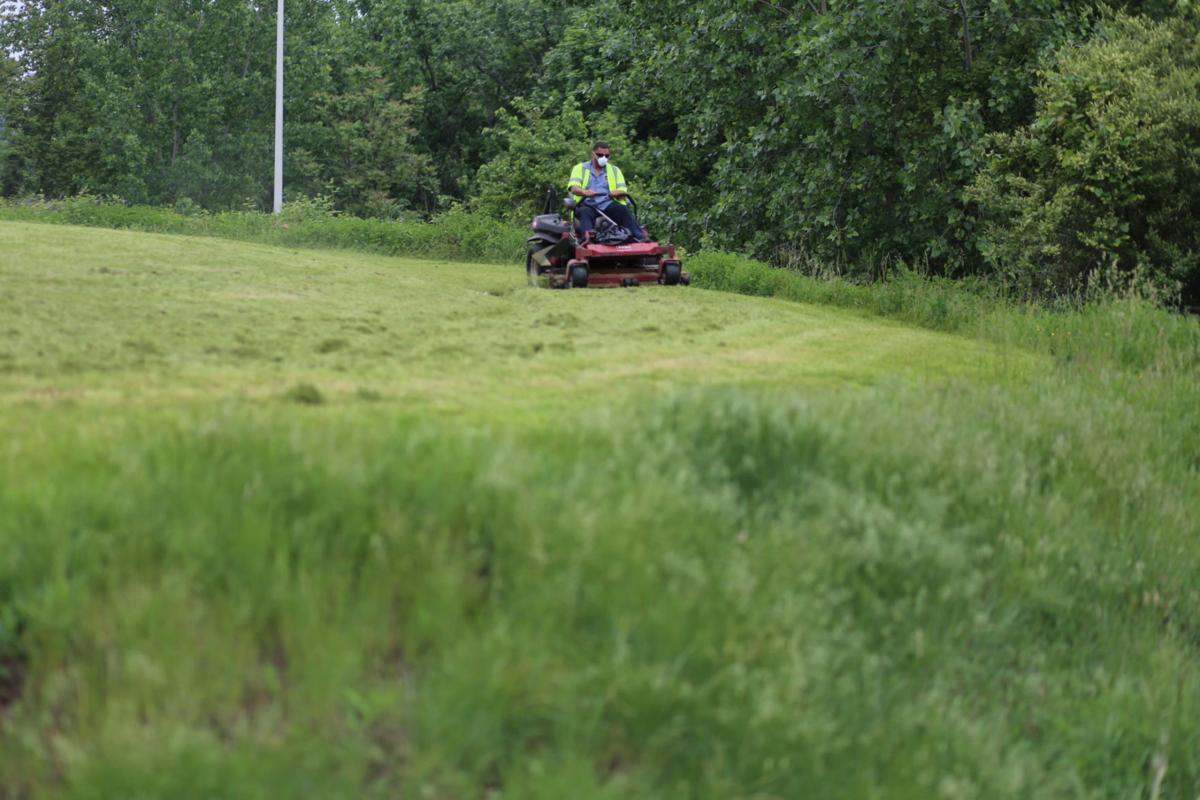 A Richmond worker mowed near the Lee Bridge this month. Budget constraints will prevent the city from keeping up on grass cutting until at least July.

When Shirley Perkins heard the city of Richmond wasn’t going to be able to keep grass on public property mowed this summer, she put on her old clothes, loaded her push mower into her car, threw in a gas can, and headed for the wide medians of Monument Avenue.

“It was so bad,” said the 78-year-old South Richmond resident. “I cut a pretty good section.”

Perkins is among a handful of residents taking up the fight against tall grass that city officials more or less have surrendered, citing budget constraints.

Firefighters have been spotted mowing an overgrown park near their station. High school students stayed after class to trim unkempt landscaping at their schools. And anonymous volunteers with no specific affiliations — like Perkins — have felt called to show up and start mowing.

The Department of Public Works said earlier this month that most medians will be cut only once this season and most parks only twice, though high-traffic areas and those that host special events will get additional attention.

They said the situation would improve somewhat when the new fiscal year begins July 1 and more funding becomes available.

Until then, the city has set up a volunteer program to coordinate mowing by residents after issuing an early plea for people not to simply take matters into their own hands.

According to Department of Public Works spokeswoman Sharon North, six people have been given permission to mow, and the city has set a list of 25 parks, playgrounds and medians they’d like volunteers to handle.

North invited anyone else with access to a lawn mower to help by contacting the city’s Clean City Commission.

“We need all the help we can get right now, especially considering all the rain we’ve had lately,” she said.

Unofficially, some public officials are encouraging people to help the city — with or without permission.

“I think it should be don’t ask, don’t tell when it comes to mowing,” School Board member Kimberly Gray said. “Folks have been showing up mowing the grass at various schools. I’m grateful that people are stepping up.

At a recent School Board meeting, members complained about the tall grass.

“Somebody mowed the lawn at Fisher Elementary, and I greatly appreciate it,” School Board member Kristen Larson said. “But I would just like us to explore the idea of some sort of stopgap so we don’t have to worry about this for the next eight weeks.”

School administrators said they would look into it but also doubted the school system, with its ailing facilities, would be able to dedicate any additional resources to grounds keeping.

According to a prioritization chart provided by the Department of Public Works, city schools should be receiving more attention than other areas.

North, the department’s spokeswoman, said the city is prioritizing locations that host special events; Richmond Public Schools; major parks; and medians in areas that are considered gateways to the city and other areas that are highly ranked because of high vehicle or pedestrian traffic.

North said those areas represent about 35 percent of the properties the city is responsible for mowing.

The remaining 65 percent, she said, would be mowed as resources permitted.

And that’s where the volunteers come in, whether they’re authorized or not.

Hassan Fountain Sr., who lives in Ginter Park Terrace, got permission from the city to mow at Providence Park Playground.

He said the process was easy and he doesn’t have any misgivings about volunteering to do a job many would consider to be a core government service.

“As a taxpayer and a citizen of Richmond, I love my city,” said Fountain, who works in production at the Coca-Cola bottling plant.

“It’s like going into the Marines. My son is in the Marines, and when he’s called up to serve, he’s happy to do it. And that’s the way I feel about this.”

For her part, Perkins said she didn’t have any misgivings about her decision to go rogue and mow a Monument Avenue median without permission.

“I didn’t think anybody would mind seeing somebody cut grass to make it look better,” she said. “The worst they could do is stop me.”

Richmond's Department of Public Works has identified 25 places they'd like volunteers to mow.

To help, contact the city's Clean City Commission at 646-8325. Volunteers must provide their own mowers.

Areas the city would like volunteers to mow include:

Priority areas where city crews will focus their mowing mowing efforts include:

To help Richmond deal with its shortage of groundskeeping funds, city jail inmates mowed the grass at Forest Hill Park in Richmond on Tuesday.

Shirley Perkins, 78, who lives in South Richmond, loaded up her lawn mower and helped the city by cutting one of the medians on Monument Avenue. She said she didn’t have permission, but said she didn’t think it would be a problem.

Shirley Perkins, a city resident who lives near the Pony Pasture, mows the grass in the median in the 1800 Block of Monument Avenue, Monday, May 16, 2016.

A Richmond worker mowed near the Lee Bridge this month. Budget constraints will prevent the city from keeping up on grass cutting until at least July.