After a Goochland County sewer line burst, causing 300,000 gallons of raw sewage to plunge in the water, RVA Paddlesports canceled its trips for a week. The business, which operates whitewater rafting and kayaking experiences on the James River, lost more than $30,000 in revenue, said Patrick Griffin, the company’s founder.

Even worse, the sewage leak is scaring customers. One group canceled its trip in the Varina portion of the James River, 35 miles from the leak and nowhere near the portion of the river under a safety advisory. Another family called off its outing a week in advance, deciding not to wait for the all-clear from the Virginia Department of Health, which came Wednesday.

River advocates are concerned about the health of the James, too. In the span of 10 days, sewage entered the river five times. Residents have expressed concern that visitors aren’t properly notified of when water conditions are poor and that testing performed by the state is slow and intermittent. And these concerns come at a time when Richmond is trying to figure out how to replace an outdated sewer system that frequently overflows in storms, dumping sewage in the water.

“There are serious concerns for the public who are trying to go down and enjoy the river,” said Jamie Brunkow, James Riverkeeper for the James River Association.

On July 23, a separate leak was discovered in a ductile iron sewer main along the Pipeline Trail in downtown Richmond, and as many as 200 gallons of sewage dripped into the river. Workers slowed the leak but couldn’t completely contain it, and 40 gallons per hour continued to seep from the pipe.

That same day, the river narrowly missed another incident when a CSX freight train derailed, sending 13 coal cars off the tracks near Tredegar Street. It was originally believed that coal dumped into the Kanawha Canal, but now the Department of Environmental Quality says no coal entered the water.

In the days that followed, enough rain fell in Richmond that the city’s outdated sewer system overflowed three times, and sewage seeped into the James. Sewer overflows repeatedly endanger the safety of the water, river advocates said. The state has set a deadline in 2035 for Richmond to upgrade its system. But the repairs will come at a cost of more than $800 million, Mayor Levar Stoney has said.

On Saturday morning, Richmond resident Debby Cohen visited Pony Pasture and Huguenot Flatwater but saw no signs warning visitors to stay out of the water. She watched as a family unloaded a picnic basket and water wings from their car, so Cohen approached them and notified them of the advisory.

Nearby, there was an adjustable sign that can advise guests when the water is high or dangerous. The words “no user restriction” were still displayed.

Cohen went home and made two signs with cardboard and a marker. She wrote “Danger! Peligro!” and glued on a newspaper article explaining the health department’s warning. She attached the sign to a tree and called the Department of Health’s emergency line, speaking to a receptionist. She never got a call back as she was told.

On Monday, Cohen returned to Pony Pasture, where she saw two 8-by-11-inch signs advising river-goers of the danger. But there are multiple entry points to the water, and the signs were easy to miss, she said. A family was emerging from the water, so she told them about the risk of bacteria and advised they take a shower when they got home.

“This seems like an insufficient response to a potentially big problem for kids,” Cohen said.

A retired pediatric nurse practitioner, Cohen volunteers with the Medical Reserve Corps. Volunteers could have been stationed at the river to make sure visitors were aware of the risks, she said. Low-income people are the most likely to be affected.

“It’s not the privileged people who are swimming in the river,” she said.

Sharon Talarico, her partner who helped make the signs, said that if you didn’t see the newspaper or television news, you wouldn’t have known the state of the river on Saturday morning.

The VDH distributed signs to each locality and asked them to be posted, a department spokesperson said. The city printed 30 signs and put them up at all boat launches and in kiosks along the James River Park System, said Jim Nolan, a spokesperson for the mayor.

The majority of RVA Paddlesports’ business comes during a 12-week season in the summer, so losing a week of bookings is significant, Griffin said. Every day, the business waits for the results of water quality testing.

The DEQ tested the James twice after the Goochland pipe ruptured, on July 28 and again Monday. Generally, water quality tests in the Richmond area take a week to complete and are used to determine long-term trends, not short-term risks, said Margaret Smigo, the VDH’s waterborne hazards program coordinator.

In this instance, the department expedited the tests and finished in about a day and a half. It is still waiting for better technology to produce faster results, Smigo said. In other parts of the state, the DEQ can test water quality every day after a failed test. But those capabilities are available because of federal funding, Smigo said.

A spokesperson for the DEQ declined to comment, referring a reporter to the state health department.

Based on the speed at which the James flows, Griffin estimated the Goochland bacteria was clear from the river by Saturday. But he had to wait four more days for the state to retest the water and issue the green light to return.

Operating a business that depends on good weather and just the right amount of rain brings challenges, Griffin said. On the plus side, shutting down rafting and kayaking trips for a week allowed his staff a chance to rest.

And the timing wasn’t terrible. The company happened to be moving its equipment into a new warehouse at the time.

Between July 1 and Aug. 1, combined sewer overflows occurred five times. The James River Association tests the river once a week during the summer, and at Rocketts Landing, a site close to the portion of the city with a combined system, one out of every three tests has failed in the past eight years.

The state has given Richmond a deadline in 2035 to replace its outdated sewer, but the city said it would have to raise utility bills 187% to cover the costs of the overhaul.

On Sunday, five days after the Goochland pipe broke, the James River Association tested the water in the James. Pony Pasture was clean, signaling the sewage had washed out. But tests at Reedy Creek and 14th Street produced elevated levels of bacteria. Earlier that day at 5 a.m., following a large downpour, Richmond’s combined sewer system had overflowed, once again sending germs into the water.

A federal jury in Richmond on Friday found three members of a Midlothian family guilty in a scheme that kept a woman from Pakistan in forced labor at their home for more than a dozen years.

Richmond City is likely to enter medium level in the coming weeks.

Update: I-95 backup in Chesterfield clear after 8-mile delay

The crash occurred sometime around 3 p.m. near the Route 10 exit, according to VDOT officials.

Planning error, inflation drove up cost of construction 67% for this VCU building

The VCU data center will cost $970 per square foot, up from $580 when the project was approved by the board of visitors in October.

Still without a formal agreement with descendants of A.P. Hill, the city of Richmond is seeking a court order to move the Confederate general’… 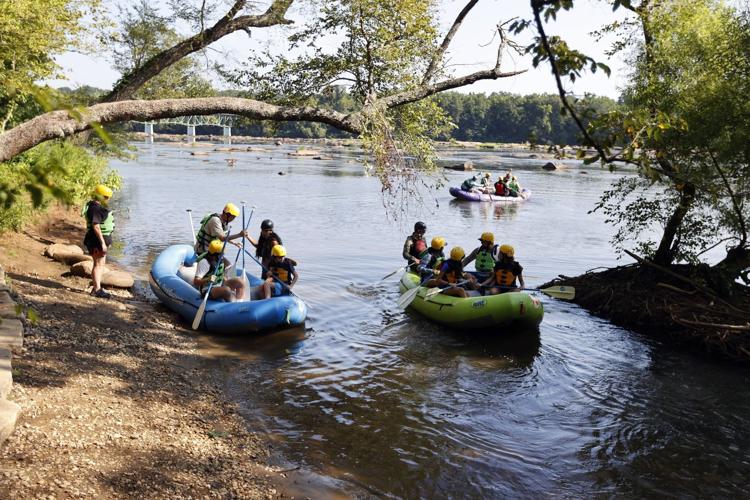 RVA Paddlesports suspended rafting activity last week on the James River due to possible contamination of the river from sewage. The Virginia Department of Health now says it is safe to be in the water. Rafters depart the launch site near Reedy Creek. 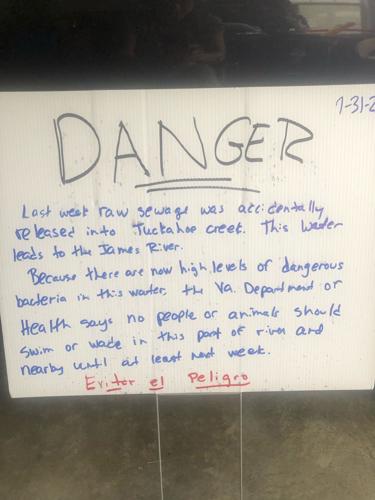 When she didn’t see any signs advising visitors to stay out of the James River, Richmond resident Debby Cohen made two of her own. She posted them at Pony Pasture and Huguenot Flatwater. 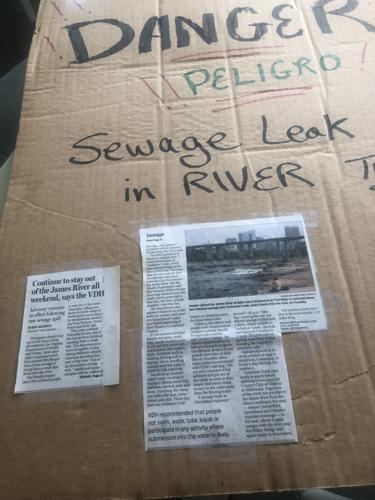 When she didn't see any signs advising visitors to stay out of the James River, Richmond resident Debby Cohen made two of her own. She posted them at Pony Pasture and Huguenot Flatwater. 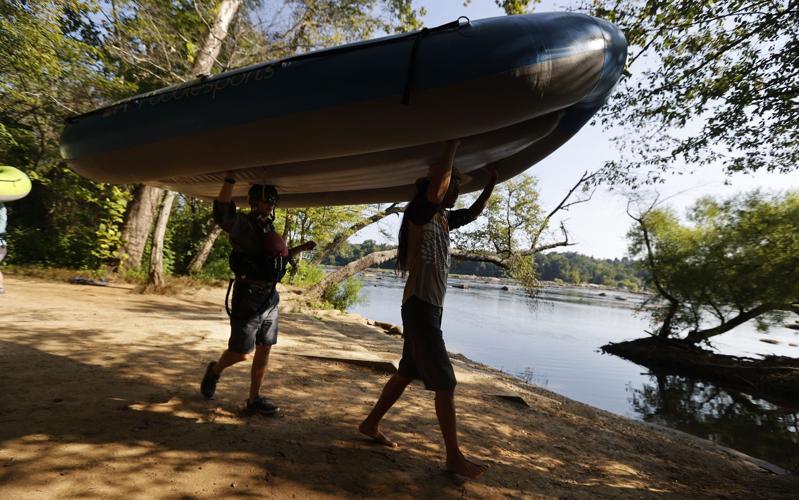 RVA Paddlesports suspended rafting activity last week on the James River due to possible contamination of the water from sewage. The Virginia Department of Health now says it is safe to be in the water. Jin Kim, right, and Matthew Centofanti carried a raft to the launch site. 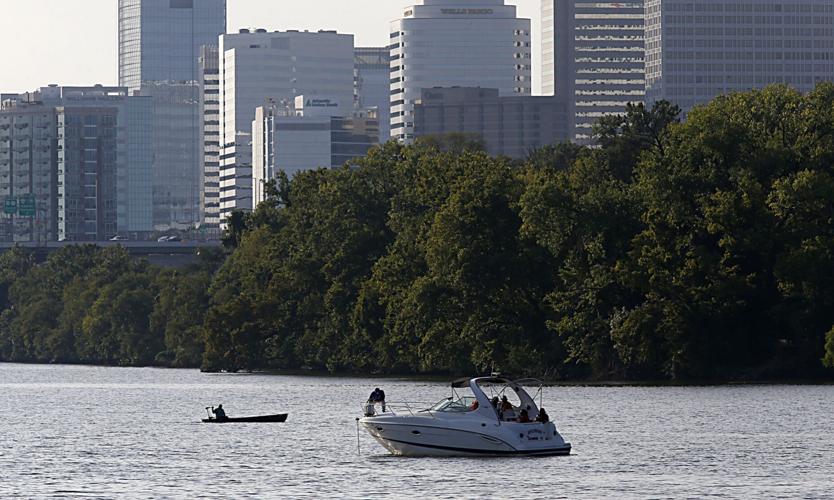