Pictured are some of the firearms that police seized during their investigation of a gunfight Feb. 6 in the parking lot of the Waffle House on the Boulevard in Colonial Heights. 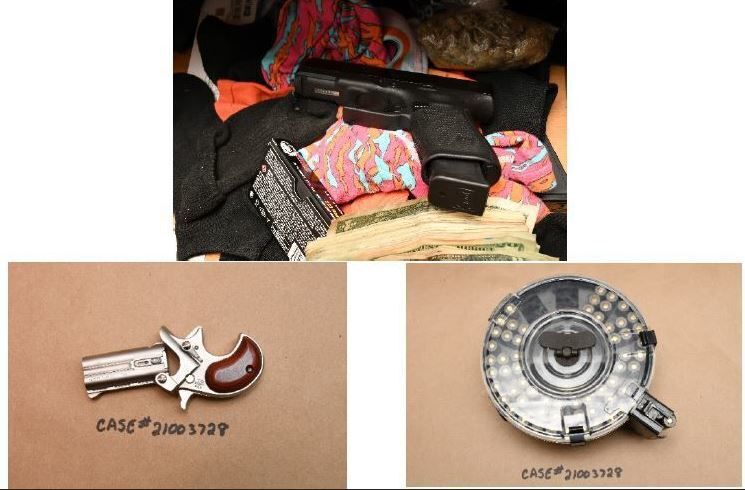 These two guns and high-capacity drum magazine were seized by police as part of an investigation into a Feb 6 gunfight in the parking lot of the Waffle House in Colonial Heights.

Criminal cases against three men charged in a February gunfight that erupted outside a Waffle House in the center of Colonial Heights’ main business district and spilled into adjacent neighborhoods have collapsed due to insufficient evidence and won’t be prosecuted.

No cooperation from the victims who were shot during a gun battle that saw more than 100 rounds of ammunition fired and a lack of success in identifying some of the shooters has resulted in all charges being withdrawn or dismissed against the defendants, said Colonial Heights Commonwealth’s Attorney Gray Collins.

“It was a significant event for our city that usually has very little violent crime,” Collins said. “The police did an excellent job gathering all the evidence they could find in the Waffle House case, but upon reviewing that evidence, we did not believe that we would be able to meet our legal burden of proof at trial.”

The gun battle centered at the Waffle House at 2002 Boulevard near the intersection at Temple Avenue moved into nearby neighborhoods as several people chased one another while exchanging fire around 2:30 a.m. on Feb. 6.

Errant rounds struck nearby buildings, fences and vehicles, and when police arrived, they found more than 100 cartridge casings littering the Waffle House parking lot and in a neighborhood about a block away. At least four guns were fired.

A 19-year-old man from Alexandria and a 25-year-old man from Richmond were shot and drove themselves to local hospitals. Neither suffered life-threatening injuries. Court papers indicate a third person was shot and wounded but details were unavailable.

During the course of the investigation, investigators executed multiple search warrants and recovered at least seven guns, a high-capacity drum magazine and drug distribution materials. More than 150 pieces of potential evidence collected by investigators was submitted to the Virginia Department of Forensic Science for examination, authorities said.

Police arrested three men: Anthony T. Taylor Jr., 20, of Hopewell; Migueal Bouldin, 25, of Richmond; and Jaquan W. Poarch, 25, of Chesterfield County. Taylor was charged with two counts of attempted malicious wounding, felony use of a firearm and reckless handling of a firearm. Bouldin and Poarch were each charged with conspiring to incite a riot.

The attempted malicious wounding and felony firearm charges were dismissed against Taylor in July during a preliminary hearing in Colonial Heights General District Court. The reckless handling of a firearm charge was withdrawn by prosecutors.

Charges of conspiring to incite a riot were withdrawn in June and July against Poarch and Bouldin, respectively.

An affidavit to obtain a search warrant filed in Dinwiddie Circuit Court provides a snapshot into what police believed occurred.

Video surveillance footage confirmed that all three victims had been inside the Waffle House just before the shooting. The footage also showed a man inside wearing a Chicago Bulls jersey, and during the gunfight he can be seen leaving the restaurant and taking cover behind a parked vehicle. The video also shows him pulling out a handgun and firing into the parking lot. After firing numerous shots, the man can be seen fleeing behind the Waffle House.

Police sent out a public information flyer with a photo of the man wearing the Chicago Bulls jersey. Numerous Crime Solvers tips police received identified the man as Anthony Taylor. Two Dinwiddie Sheriff’s detectives familiar with Taylor also identified him as the man in the photo. In addition, investigators located a photo of Taylor wearing the same jersey on his sister’s Facebook page, according to the affidavit.

Based on the tips, positive identification by law enforcement officers and the photo of Taylor in the jersey, investigators obtained warrants for his arrest, the affidavit says.

Surveillance video from inside the Waffle House just before the shooting showed people arguing, with some appearing to use hand gestures toward each other. One person in particular appeared to be instigating the confrontation, according to the affidavit.

Video images of the Waffle House customers were sent to Dinwiddie sheriff’s detectives, and they identified one of them as Poarch. Information from the Virginia Department of Motor Vehicles was obtained for Poarch and he was positively identified as one of the men inside the Waffle House, the affidavit says.

Due to Poarch’s actions that could be viewed inside the Waffle House, along with the large volume of gunfire that occurred outside, investigators obtained a warrant against Poarch for conspiring to incite a riot. Details on Bouldin’s alleged involvement were not available.

“It is disappointing that some of these cases are not moving forward at this time, however it is not uncommon for victims and or witnesses that were initially cooperative to decide against it once it is time for trial,” said Colonial Heights Police Capt. Robert Ruxer. “We have an excellent working relationship with our Commonwealth Attorney’s Office and rely on their expertise to determine if it is prudent to take a case to trial.”

“That being said, I believe that our investigators did an outstanding job collecting evidence and locating the individuals suspected of committing these crimes,” he added.

Pictured are some of the firearms that police seized during their investigation of a gunfight Feb. 6 in the parking lot of the Waffle House on the Boulevard in Colonial Heights.

These two guns and high-capacity drum magazine were seized by police as part of an investigation into a Feb 6 gunfight in the parking lot of the Waffle House in Colonial Heights.