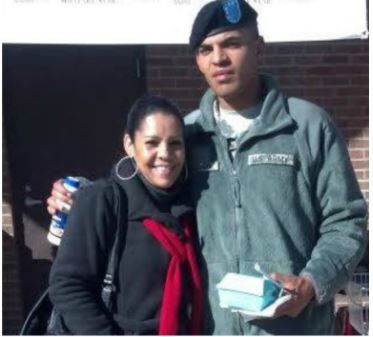 McKellon stood with his mother, Alexandra Clark, in 2013 after he finished his basic training in the Army National Guard Reserve. 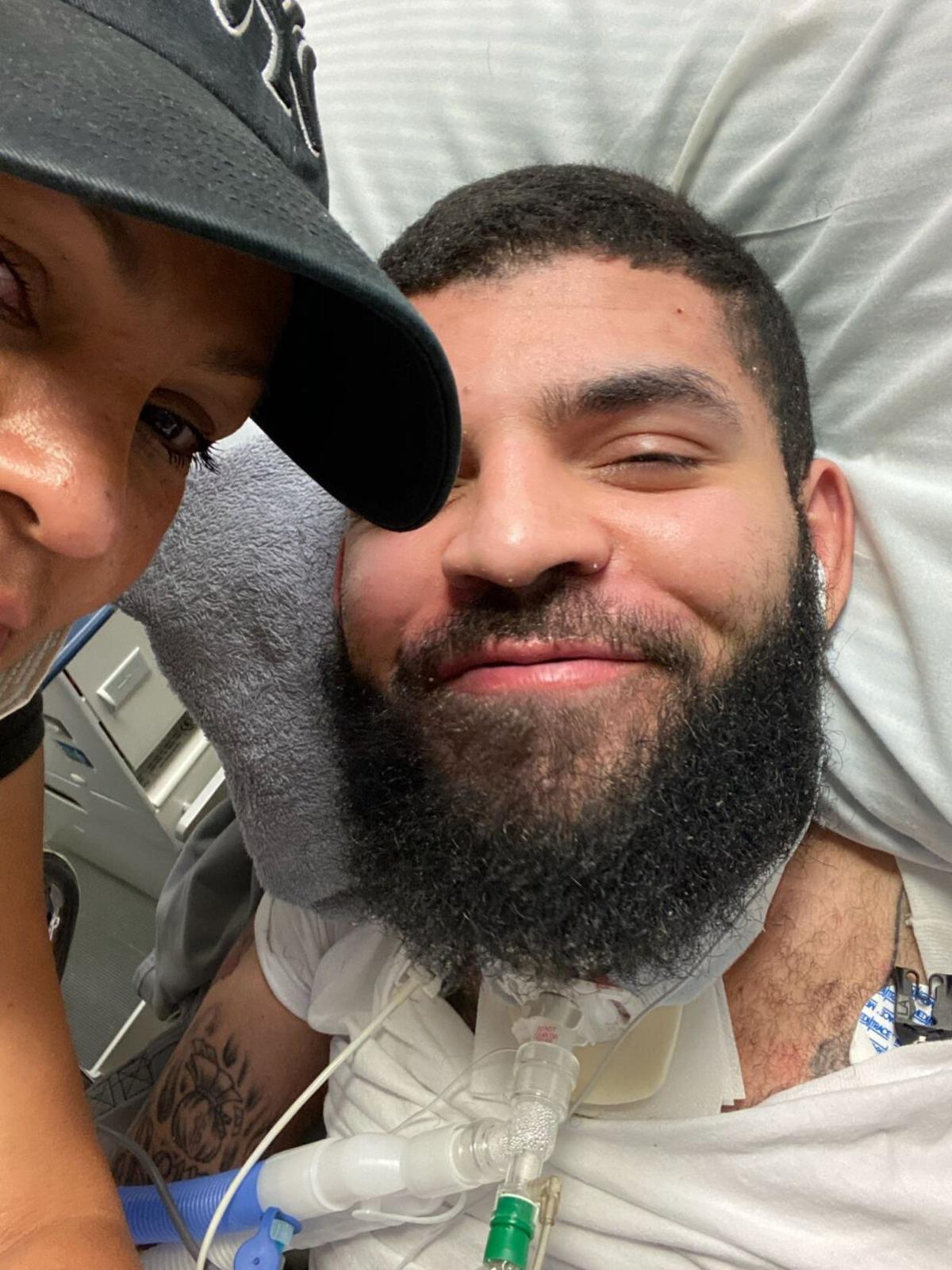 McKellon smiled for a photo with Clark after a bullet was removed from his back about three months ago. He was shot in a car in Petersburg on Jan. 2, 2019. 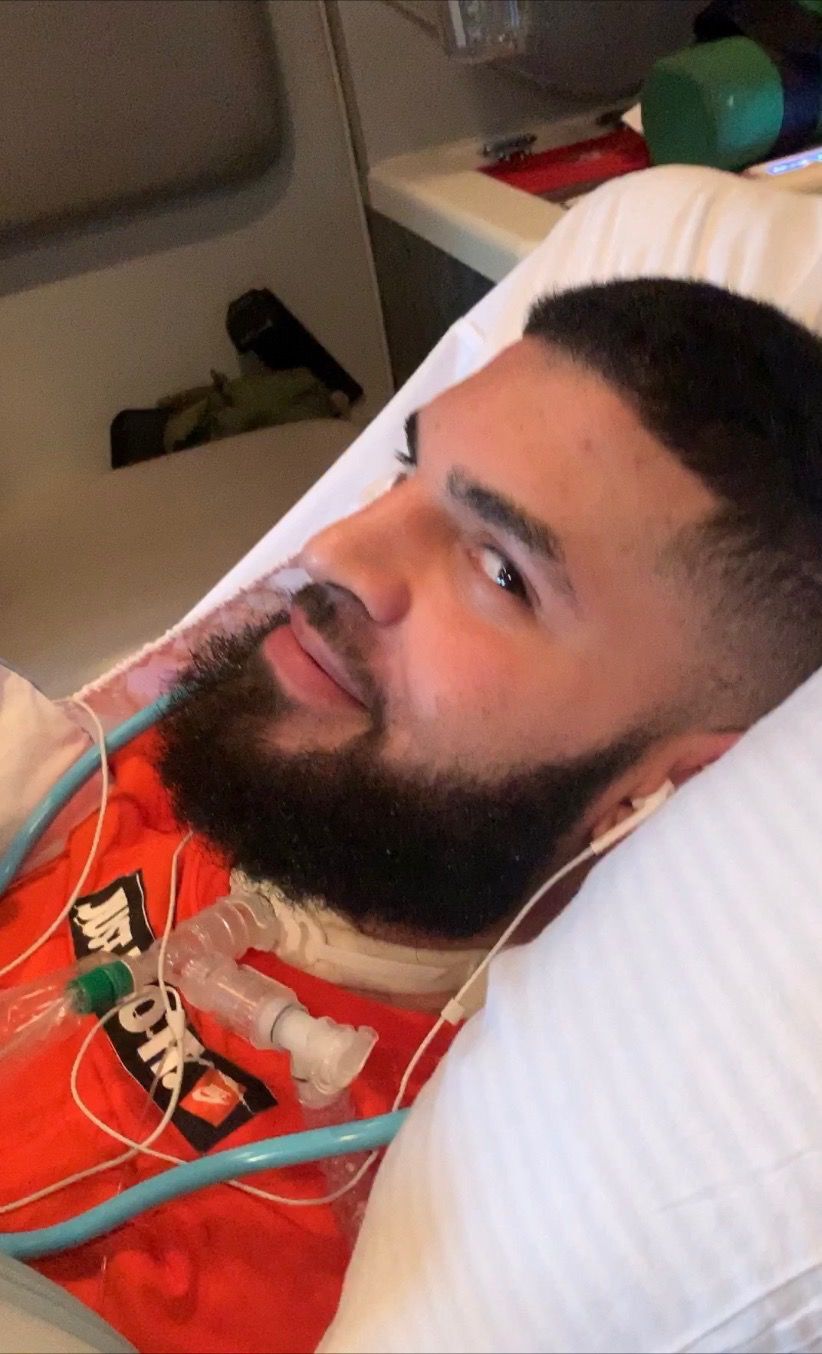 Jeremy McKellon being transported by ambulance to a doctor’s appointment in July 2020. The ambulance was required due to his advanced life support needs. 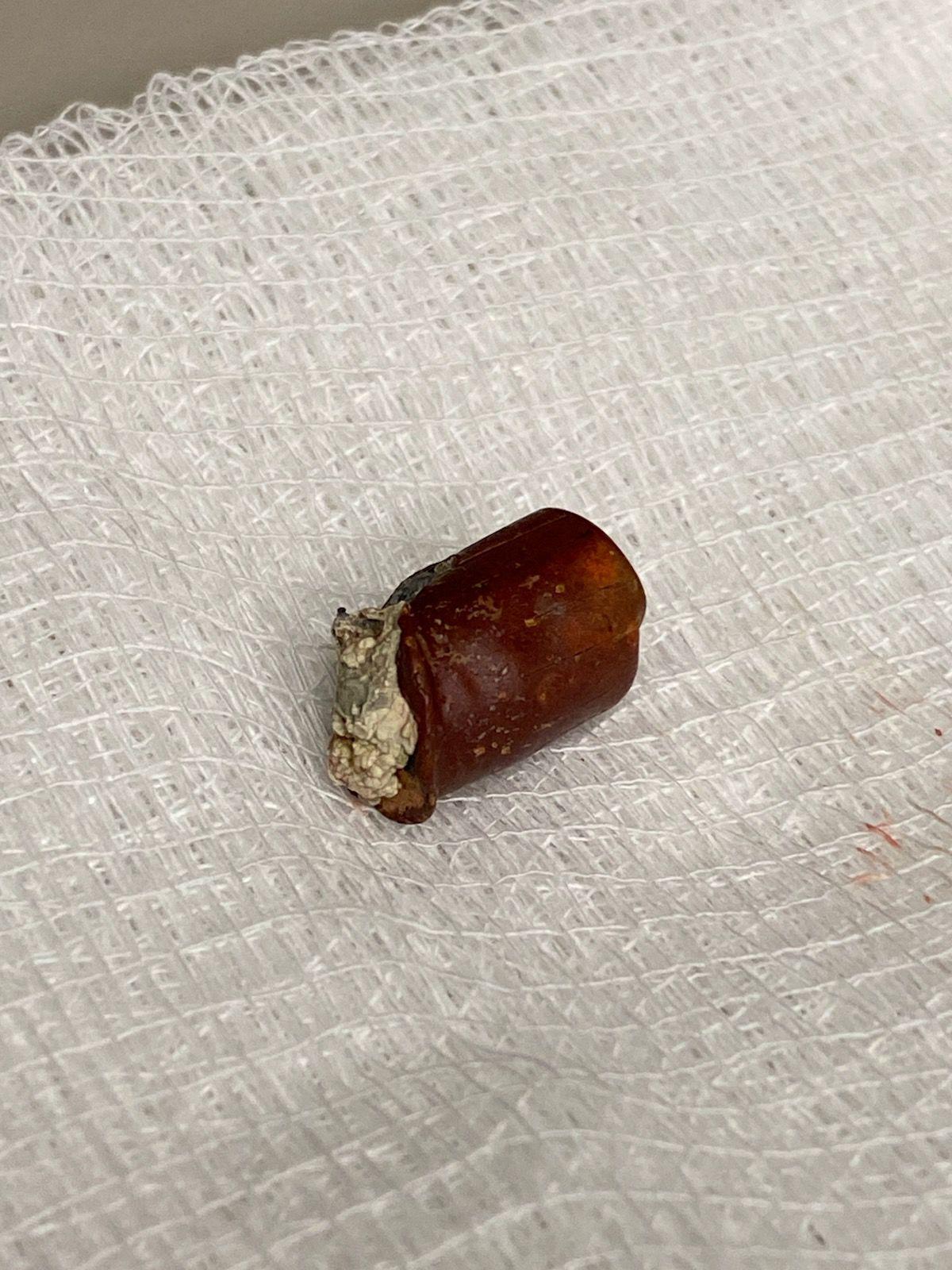 Photo of a bullet slug removed from Jeremy McKellon’s back three months ago, more than a year after the Jan. 2, 2019 shooting that left him paralyzed. 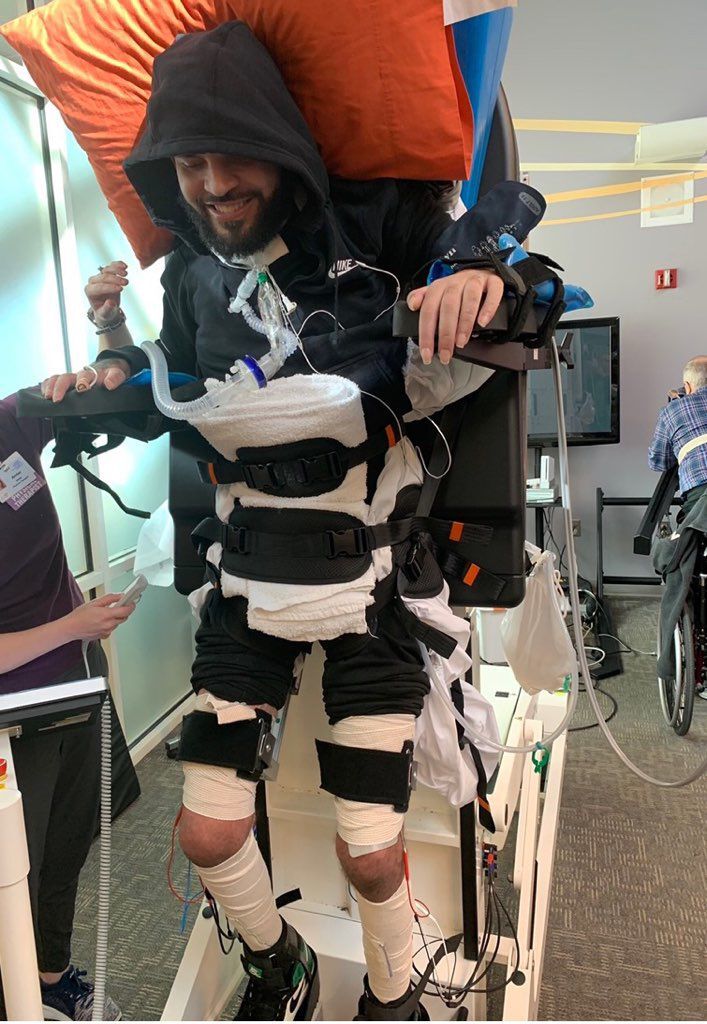 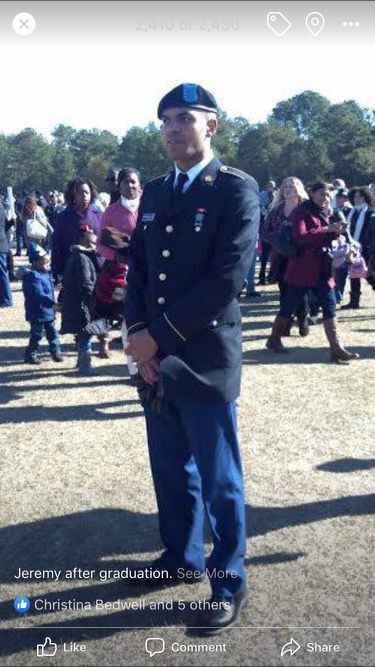 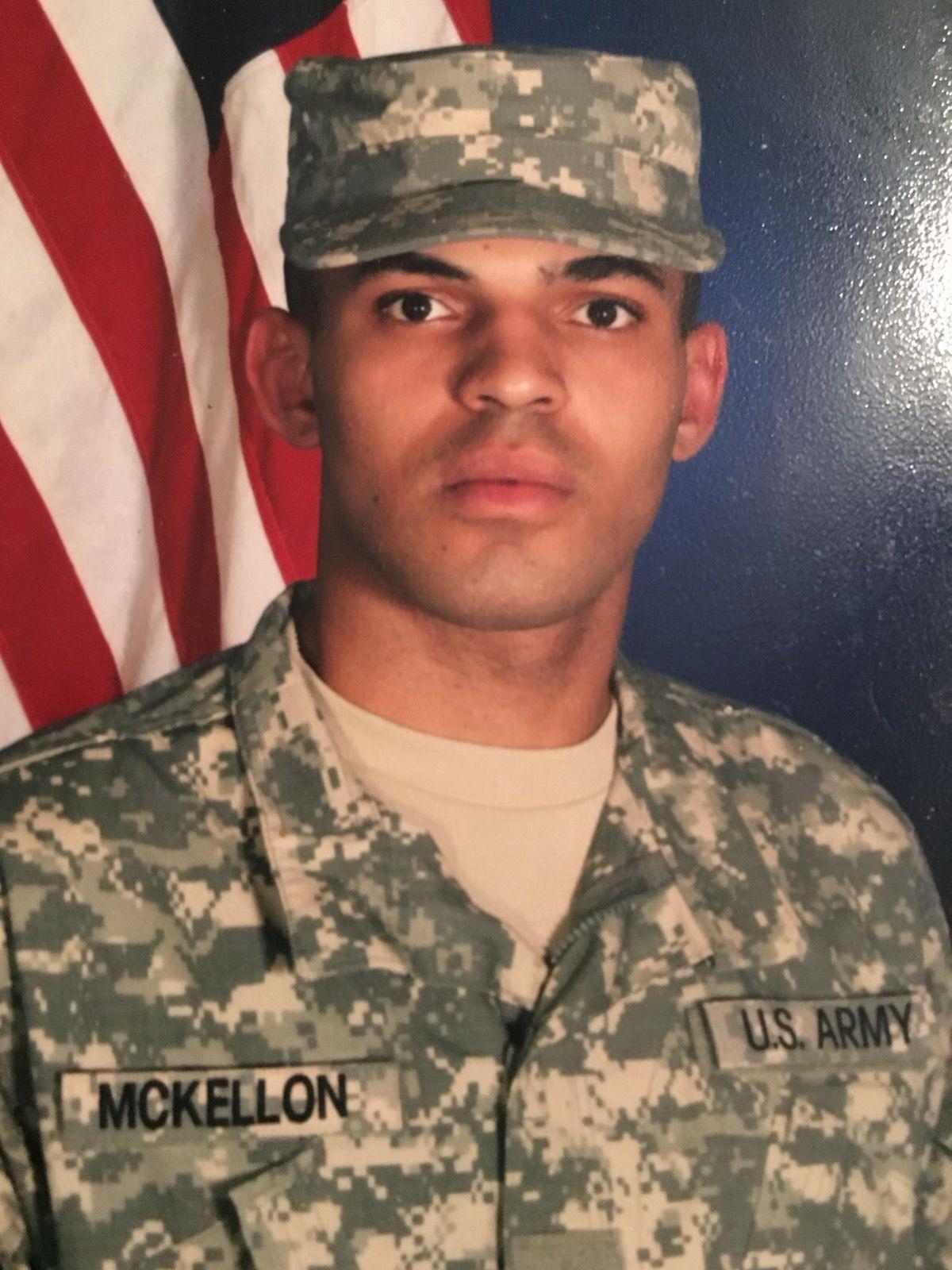 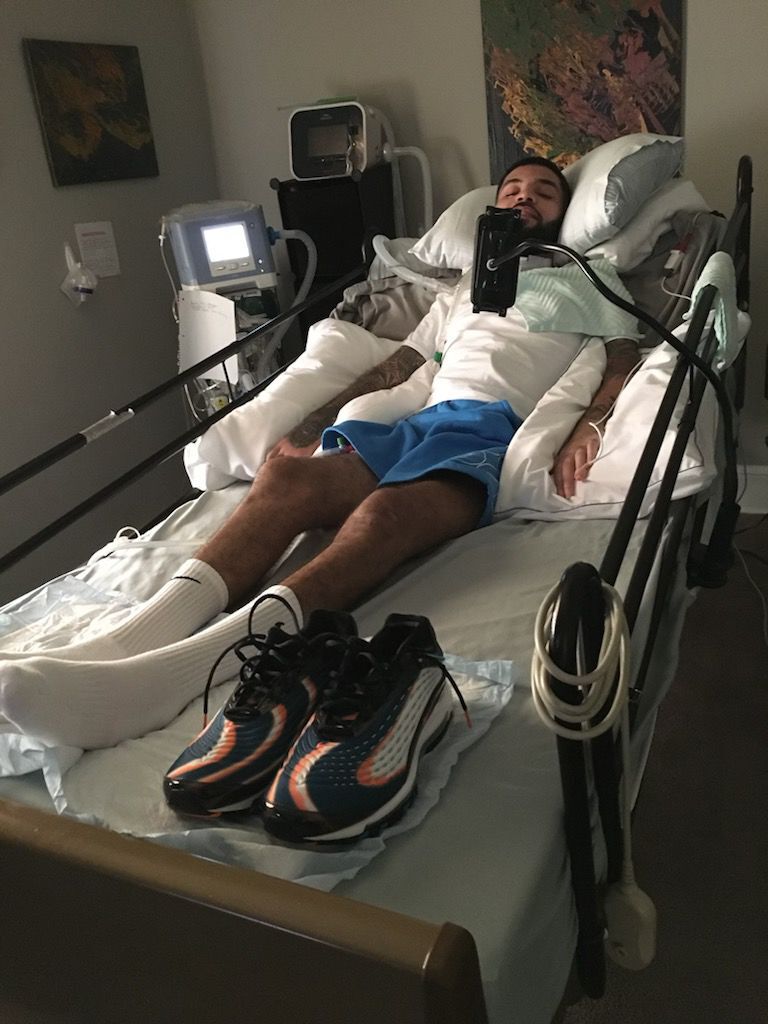 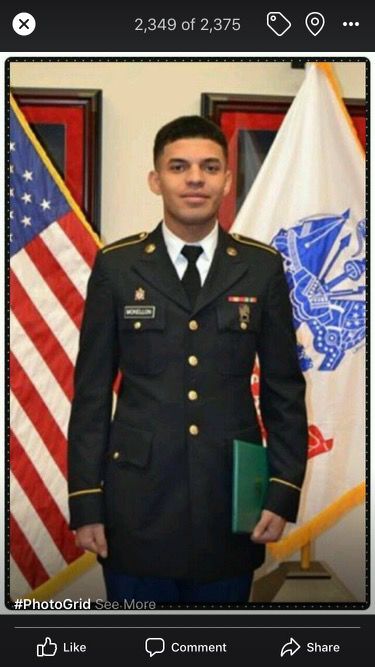 Jeremy McKellon after being sworn in with Army National Guard Reserve.

Just over two years ago, Jeremy McKellon was on his way to Southpark Mall in Colonial Heights to buy his then-girlfriend an engagement ring, with a plan to propose to her later that evening.

But faulty directions from a GPS device sent him off course, and the route he mistakenly took changed his life forever.

Then 24, McKellon, an Army National Guard Reserve veteran, didn’t end up at the mall but at the intersection of South Crater and Graham roads just off Interstate 95 in Petersburg.

As he waited for the light to turn green and find his way to the mall, a gunman suddenly appeared and fired shots into McKellon’s rented SUV, striking him twice in the neck. The gunshot wounds left him paralyzed for life.

Petersburg police soon tracked down the shooter, Terrell Antonio Fisher, then 30, a felon with an extensive criminal record. It didn’t take long for investigators to determine that Fisher had shot McKellon in a tragic case of mistaken identity.

“In an interview with police, Mr. Fisher did indicate that he believed the person in the vehicle was someone else that he had had — for lack of a better word — bad blood with,” said Petersburg Commonwealth’s Attorney Tiffany Buckner. “He did make a statement that he regretted what happened and that he didn’t intend to do it.”

Fisher indicated that the person he mistook for McKellon had shot him — or fired a shot at him — many years earlier, the prosecutor said.

McKellon’s family was aghast at the news.

The shooting and its devastating consequences came full circle on Dec. 22, when a Petersburg judge sentenced Fisher to serve 20 years in prison on his earlier guilty pleas to aggravated malicious wounding, felonious use of a firearm and possession of a firearm by a felon in McKellon’s Jan. 2, 2019, shooting.

The punishment brought some measure of justice for McKellon, now 26. But he and his family are still reeling two years later, struggling to pick up the pieces of a shooting that shattered his life and dreams.

“A lot of people just don’t know what goes on behind the scenes after someone suffers from a violent crime, after someone suffers from a devastating gunshot wound,” said Alexandra Clark, who has taken on the role of her son’s caregiver. “The aftermath — that’s what nobody understands. It’s like, so what do you do? How do you do it? Who do you contact? What are your resources? Where are your friends?

“There’s so much more to it than just, OK, well the [shooter] got sentenced and jail.”

The shooting occurred about 7:30 p.m. after McKellon got turned around in his journey to the mall. Although he lived in Richmond, he had traveled from Washington, D.C., that day after visiting with friends and family there, Clark said.

“He was going to buy an engagement ring for his girlfriend and propose to her,” she said. “But his GPS ended up leading him the wrong way. He came from the interstate, and his plan was to get back on the interstate to get to the mall.”

When police responded to the shooting, McKellon was still sitting in the driver’s seat at the light. Neither McKellon nor his vehicle was moving. Officers observed bullet holes in the rear driver’s-side window, Buckner said in a summary of evidence.

While still on scene, a relative of the shooter, who lived about a block away, called 911 to report that Fisher had broken into his home and was hiding. But Fisher fled before police could arrive, Buckner said.

Investigators identified two female witnesses who were riding with Fisher at the time of the shooting. Fisher and the two women were staying separately at the same motel in Petersburg, and Fisher had asked one of the women for a ride to a home in the city, the prosecutor said.

The women drove Fisher to his requested destination, waited for him until he finished his business, and then began driving him back to the motel. As they reached the intersection of South Crater and Graham roads, Fisher got out and walked up to McKellon’s SUV and opened fire before running away, Buckner said.

In an agreement reached with prosecutors, he pleaded guilty to three felonies in exchange for four others being dropped, including one count of discharging a firearm in public resulting in injury, one count of malicious wounding and two counts of maliciously shooting into an occupied vehicle.

Although sentencing was left to the judge, the plea agreement called for an active prison term of at least 15 years and no more than 26 years — the midpoint to high end of recommended state sentencing guidelines that were calculated for Fisher. The prosecution argued for a 26-year term.

In Clark’s victim-impact statement to the judge, she said her son battles daily with depression and post-traumatic stress disorder, and that his hopes for a normal life with a wife and children were taken from him. He served as a productive member of society only to fall victim to a menace of society, she added.

Three months after the shooting, McKellon’s girlfriend ended their relationship, telling him via FaceTime that she needed to think about herself and her goals in life, and being with him was no longer one of those goals, Clark said.

“If the courts would not have given the shooter three chances to roam the street and a slap on his wrist, my son would have never been shot,” Clark said in her statement. “Life is precious, and no sentencing can satisfy the hurt and pain that was brought to my son and I. His life was shattered.”

Fisher also has lesser convictions in Petersburg of obstruction of justice, resisting arrest, making a false statement in a criminal investigation and possessing/distributing drug paraphernalia, according to court records.

The shooting left McKellon paralyzed from the waist down, and initially he was unable to speak and required a feeding tube. He still requires the tube to eat when he’s sluggish or tired, but can now talk and is “completely coherent,” Clark said.

McKellon served four years with the Army National Guard Reserve, ending in 2017, and worked as a barber in Richmond who gave free haircuts to children. He and his mother had signed papers in October 2018 to run a local barbershop with a scheduled grand opening date of Jan. 14 — 12 days after he was shot. “But we never got there,” Clark said.

McKellon comes from a military family that spent years overseas — Clark is a native of Germany — and after moving back to the U.S., they often transferred from one base to another.

“We moved around a lot,” said Clark, who is divorced from McKellon’s father, a career soldier who has since retired. She and her son settled in Virginia about eight years ago.

McKellon’s debilitating injuries and the constant care he requires overwhelmed his family. Clark was let go from her job with Chesterfield County because she didn’t quality for family leave due to her part-time job status and tenure of only 16 months. As her son’s caregiver, she receives a small hourly wage — $9.20 an hour — from Medicaid through Virginia’s Public Partnerships program.

Her son is receiving some benefits through Medicaid, but “we need a lot of equipment that Medicaid and insurance won’t provide,” Clark said.

Because her son didn’t serve 180 days of active duty during his four-year stint with the Army National Guard Reserve, he doesn’t quality for veterans benefits.

“When it comes to rehabilitation, we’re really, really lacking,” said Clark, who lives in Chesterfield. “We have a lack of nurses that help due to COVID, and that doesn’t make it any easier. So everything is pretty much on me. I fought so much to be at home with him, and I’m doing it, even though I was crawling on my knees sometimes because my back is hurting me so much.”

Clark said the 20-year term her son’s assailant received is “better than him getting another pat on his hand,” but she feels it is inadequate for “the damage he did to my family and my son.”

“What is the price of somebody’s life?” she said. “You can’t really put a price tag on it or an amount of years. I would say there’s no amount that would be good enough.”

A GoFundMe account for McKellon’s recovery was established in January 2019 and remains active. About $8,400 has been raised so far toward a goal of $50,000. https://www.gofundme.com/f/g57xb-restoring-jeremy-mckellon

Two juveniles injured, one fatally, in shooting in Chesterfield neighborhood

Chesterfield County police are investigating a shooting in a neighborhood that left one juvenile dead and another injured.

Federal judge, citing concerns, refuses to dismiss suit against Henrico judge and others

A federal judge on Monday refused to dismiss a lawsuit filed by the widow of former Henrico County School Board member Watson M. “Bubba” Marsh…

Henrico County police Capt. Donald L. Lambert Jr. was out for a jog Saturday morning when he was fatally struck by a tow truck that also hit a…

Chesterfield County police identified a body found last weekend in the James River as that of a 20-year-old Chesterfield man.

McKellon stood with his mother, Alexandra Clark, in 2013 after he finished his basic training in the Army National Guard Reserve.

McKellon smiled for a photo with Clark after a bullet was removed from his back about three months ago. He was shot in a car in Petersburg on Jan. 2, 2019.

Jeremy McKellon being transported by ambulance to a doctor’s appointment in July 2020. The ambulance was required due to his advanced life support needs.

Photo of a bullet slug removed from Jeremy McKellon’s back three months ago, more than a year after the Jan. 2, 2019 shooting that left him paralyzed.

Jeremy McKellon after being sworn in with Army National Guard Reserve. 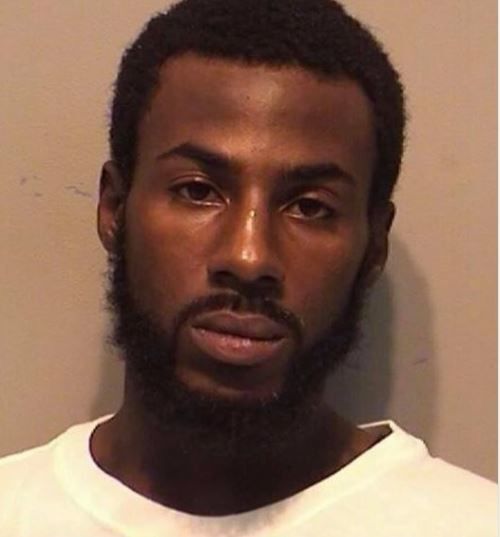