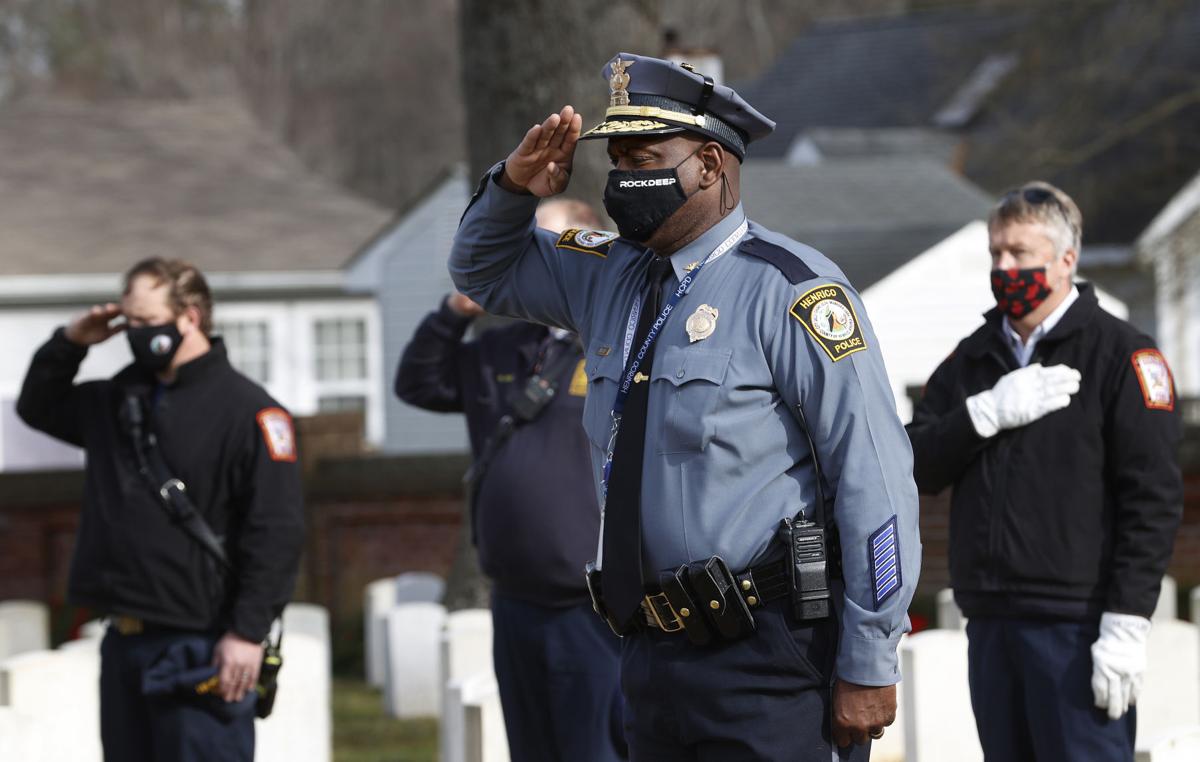 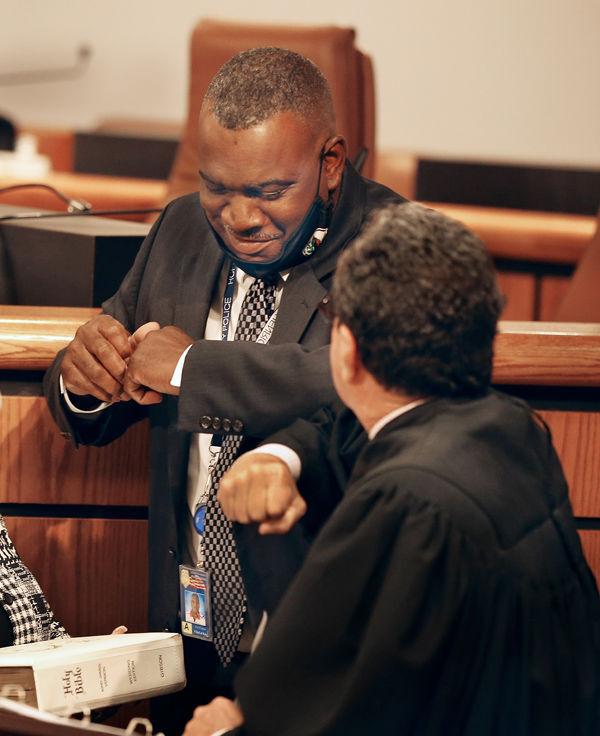 RIGHT: English received a congratulatory elbow bump from former Judge James S. Yoffy of the state’s 14th judicial circuit after he was sworn in as Henrico police chief in September 2020.

Henrico County police have rebranded themselves with a new mission, vision and values that the division’s top brass says will guide the department forward and hold it accountable to the public.

“Looking at our tagline: One team. One community. Safer together. That’s the mission. That’s what we are all about,” Henrico Police Chief Eric English said in an interview via video. “I think everybody has a role in public safety. It’s not just police. It’s not just the Board of Supervisors, not just the county manager. It’s our citizens, and us, working together in order to make us safer.”

While the work group that created the department’s new ethos completed its work under former Chief Humberto Cardounel Jr., it wasn’t rolled out until earlier this month after English gave his stamp of approval.

The division revisited the campaign following this summer’s unrest, calling for more accountability and transparency, and sweeping changes from police departments across the region and nation.

“The project was completed before all of this took place,” English said. “It was pretty forward thinking, in terms of how it all evolved, because it pretty much hit home. The ideas that the group came up with, I think it really addressed the concerns that the Black Lives Matter movement has, along with others.”

The division’s guiding principle tells its employees “to treat everyone with respect, compassion and dignity.

“We will continually ask ourselves, ‘Do my actions reflect how I want members of my family to be treated?’” it continues.

Its values are: honor, professionalism, compassion and accountability.

These didn’t change, according to Laura Beck, public information coordinator for the department. She led the work group, comprised of a cross section of department employees from civilian secretaries to sworn captains to 911 dispatchers, that came up with the refreshed principles. The group was racially diverse, as well, Beck said.

“The values are steeped in tradition for Henrico police,” she said. “We just tweaked them slightly.”

“If these are the things that we believe, then we need to be able to quickly understand them and them be meaningful,” she said.

While some of the pieces of the rebranding campaign are new — a new logo is also in the works, Beck said — it shouldn’t impact day-to-day interactions with officers, English said.

“It doesn’t change the way that we police and how we interact with our citizens because we should always be treating people with dignity or respect,” English said.

But he said the refresh, and reiterating those expectations to the rank-and-file officers, was important nonetheless. He went through a similar process in Harrisonburg when he took over that department in 2018 after spending nearly 30 years with the Richmond Police Department.

“I’m not saying we’re all perfect. We’re not,” English said. “But the more you can focus in on what our purpose is, how we should interact with our public, I think the better product we will have for our citizens, and that’s our main goal is to make sure we provide the best service we can.”

The campaign had no upfront cost since it was done within the department. English said he foresees minimal cost, if any, in the future as the tagline and principles are disseminated.

A Powhatan County man was convicted by a Louisa County jury Saturday of the 2019 shooting death of his roommate whose body was dumped in Louisa.

RIGHT: English received a congratulatory elbow bump from former Judge James S. Yoffy of the state’s 14th judicial circuit after he was sworn in as Henrico police chief in September 2020.