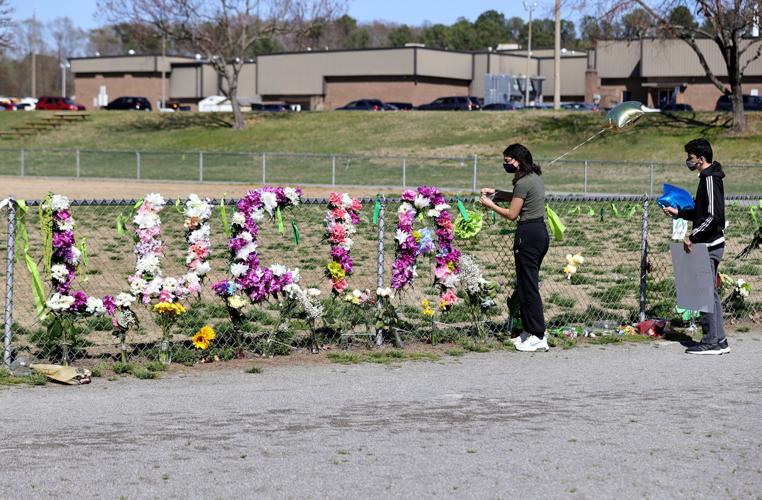 Jessica Gayed, 19, and brother Bishoy Gayed, 14, attached balloons and a poster on a fence at Quioccasin Middle School. 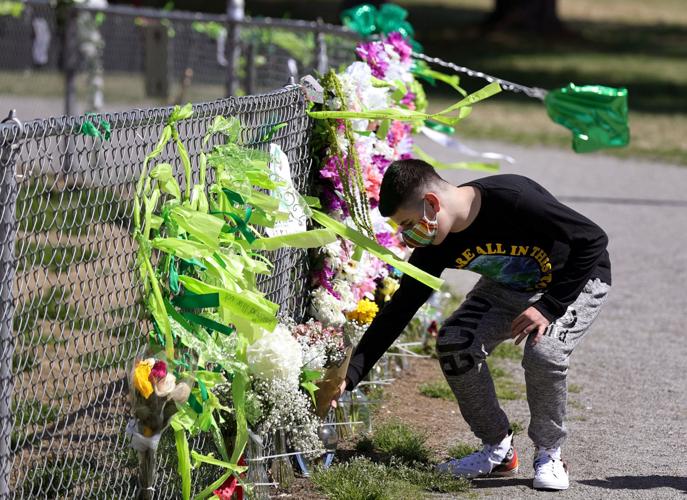 Caleb Arutyunyants, 14, a student at Quioccasin Middle School, laid flowers at the memorial for Lucia Bremer at the school. 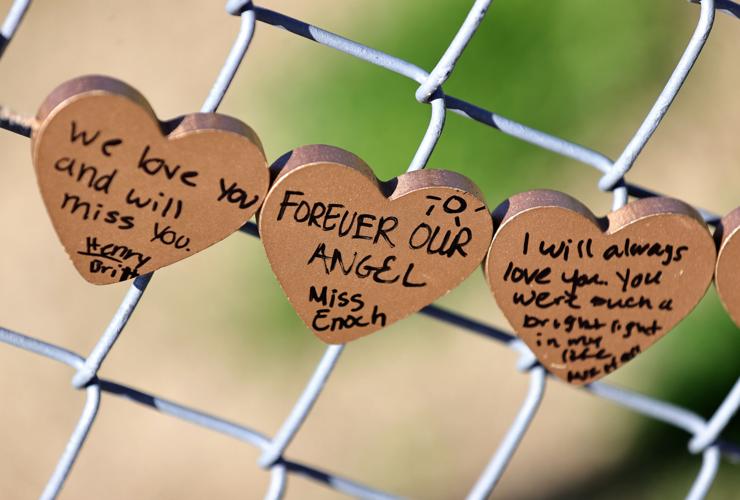 Messages to 13-year-old Lucia Bremer, who was slain near Godwin High School on March 26, were left on the fence of the Quioccasin Middle School field on March 29. 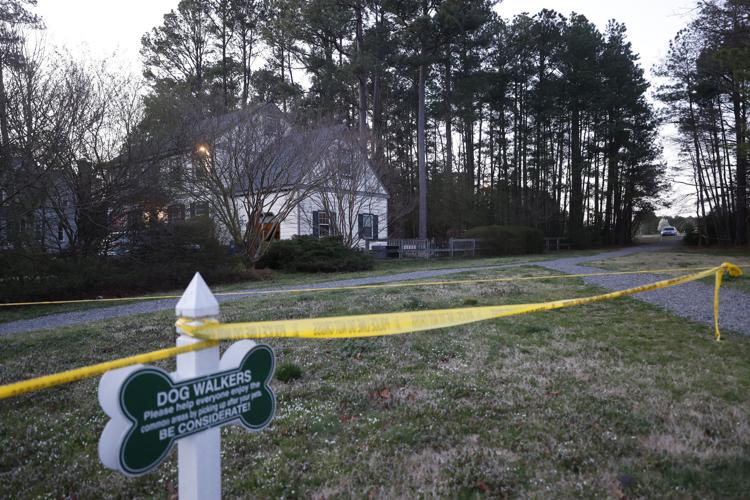 Police investigate a shooting in the 1900 block of Hickoryridge Road Friday evening, March 26, 2021. A pathway leads to the parking lot at Godwin High School. 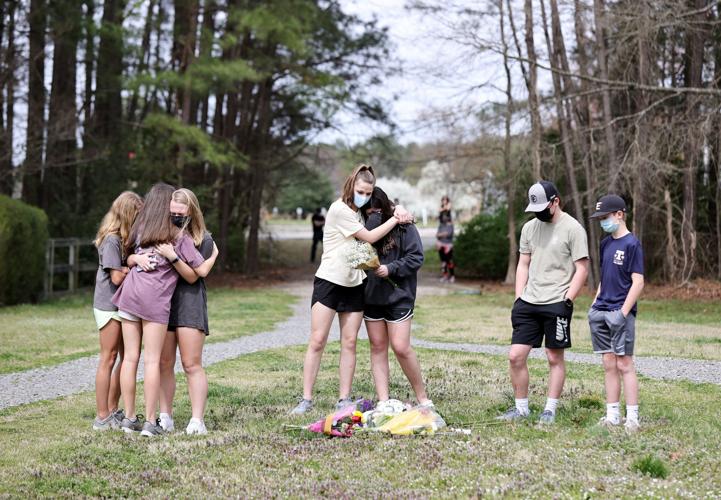 Friends of Lucia Bremer, who was slain on Friday, comforted one another as they laid flowers in the 1900 block of Hickoryridge Road on Saturday.

Her smile, that’s what Caleb Tweedie remembers of his Quioccasin Middle School classmate Lucia Bremer, who was slain Friday afternoon.

Though both eighth-graders, they didn’t have any classes together or really know each other, Tweedie said Monday after school.

His mother, Marlyn Tweedie, explained that Caleb was having a bad day when Bremer brightened it with a kind smile. They brought a bouquet of flowers to a memorial for Bremer that several teachers had started Sunday, and has grown since then.

“We’re all hurting, and we just needed to do something,” said Anne Hampton, a sixth-grade science teacher. “We all deal with grief differently, and I think sometimes people just need to do something, and it gave us something to do: a way to honor her and that we’re thinking of her.”

Bremer, 13, was shot around 4:30 p.m. Friday while walking in the 1900 block of Hickoryridge Road in the Gayton Forest West community, just behind Godwin High School. A 14-year-old boy was arraigned in Henrico County Juvenile Court on Monday morning in the fatal shooting.

Lucia was spelled out in pink and white flowers wound through the fence that surrounds the school’s soccer field, where she had played. Phil Markowski, a sixth-grade history teacher and assistant girls soccer coach, said the season was about to start and that team members plan to honor Bremer during each of their six games.

“Her name means ‘light,’ ” said school principal Melanie Phipps. “That is exactly what she exhibited every single day here at Quioccasin Middle School. There wasn’t a day that went by that she didn’t smile at someone, laugh, try to lift up our spirits.”

Phipps choked up as she described school on Monday: “We’ve all had very heavy hearts today. It’s been very challenging. ... It’s been very, very quiet.”

The school had a team of counselors, social workers and school psychologists available onsite and online, for both staff and students, on Monday. Phipps said those resources would be available the rest of the week and going forward.

A stellar student and a natural athlete, Bremer was also a bit of a prankster, according to Markowski. She’d sneak into his classroom almost daily, find his cellphone and “take selfies of herself and all her friends.” She’d then return the phone to his classroom, but he’d have to find it, Markowski chuckled.

“I had over 700 pictures of Lucia ‘and company’ on my cellphone,” he said. “I kept most of them, but I deleted them off not thinking I would need them for a day like today.”

The school has been working on a rain garden project for months, but Monday was the first day of planting, Hampton said.

“It was a nice way to honor Lucia,” she said. “It’s the garden of light.” And it’s amazing how it all came together, she added.

Bremer played center midfielder for the 2007 Elite team with the Richmond Strikers, a local soccer club, which will host “A Celebration of Life” for her at Striker Park all day on May 30.

“A center midfielder is the heart and soul of a team. Not surprisingly, Lucia was a natural center midfielder,” a statement from the club said. “We invite the community to come together to celebrate Lucia as a player, teammate and friend. Please stop by at any time during the day.”

In her honor, the lights on one field will remain on all night Tuesday.

“While Lucia is gone, her light will shine through all who knew her,” the organization said.

A 14-year-old boy was arraigned in Henrico Juvenile Court on Monday morning in connection with Bremer’s death, confirmed Commonwealth’s Attorney Shannon Taylor, who spoke with reporters outside the courthouse following the hearing that lasted only about 15 or 20 minutes.

Taylor was limited in what she said, citing the juvenile defendant’s age. But she added that “we are confident that we have the person responsible for the tragedy that occurred on Friday.”

Taylor said Monday that it is believed Bremer was walking from the Godwin High area to the Gayton Forest West neighborhood. A gravel path connects the school property to the neighborhood; it was near this path where Bremer was shot.

Henrico police scoured the area around the high school Friday evening searching for the shooter. Godwin was temporarily locked down, and a football game scheduled for that night at the school was postponed.

Police announced around 3:15 p.m. Saturday that they had taken a juvenile into custody. The boy’s identity is being withheld because of his age.

During Monday’s hearing, the boy appeared from the detention center via video, Taylor said. A guardian appeared on his behalf in court, which Taylor said is required by law.

He will continue to be held, Taylor said.

A status date was scheduled for May 4. Russ Stone and Kevin Purnell were appointed to represent the boy. Purnell declined comment Monday.

Bremer’s parents were not in court Monday morning, but Taylor said her office has been in contact with them.

On Saturday, Bremer’s family identified her as the victim of the shooting in a statement posted on social media.

“Liberty Tree Farm is saddened to report that our beloved daughter and joyful farmer, Lucia Whalen Bremer, was killed in a senseless act of gun violence on March 26,” said the post on a Facebook page for Liberty Tree Farm, which grows vegetables, herbs and flowers in Louisa County. “Thank you for keeping our family in your thoughts as we navigate the next few weeks.”

While Virginia law does allow a defendant as young as 14 to be tried as an adult, Taylor said it is too early to consider it.

“We have a community that is hurting,” Taylor said. “Whether it be from the young lady playing on the soccer team or just what we’ve seen from educators responding about her being a stellar student — there are a lot of people hurting.

“But I would be remiss if I didn’t also acknowledge that we are talking about a 14-year-old juvenile defendant as well.”

The law already determines the types of crimes that a juvenile defendant may commit that would be eligible for trial as an adult, and murder is among them, Taylor said. But there are other factors to consider like the defendant’s age, whether they’ve had other contacts with police, mental health issues, and what might have caused them to act in such a way, Taylor said.

A GoFundMe webpage, which was created to support the Bremer family, had raised more than $75,000 as of 9 p.m. Monday.

All Crime Stoppers methods are anonymous.

Police investigate a shooting in the 1900 block of Hickoryridge Road in Henrico County on Friday evening, March 26, 2021.

Quioccasin Middle School principal talks of her student, Lucia Bremer, who was shot and killed on Friday.

Quioccasin Middle School principal talks of her student, Lucia Bremer, who was shot and killed on Friday.

'Heartbroken and devastated': Henrico girl mourned as boy is charged with murder in her shooting

"Lucia was wise beyond her years. Talking to her didn’t feel like talking to a middle schooler. ... Her smile would light up the entire room. …

UPDATE: About 3:15 p.m. Saturday, Henrico police said in a news release that a juvenile had been taken into custody and charged with second-de…

Timelapse shows Earth from the view of an ISS astronaut

The Terminator T-1000 is real! Scientists create man-shaped robot that turns into liquid

The Terminator T-1000 is real! Scientists create man-shaped robot that turns into liquid

A1 Minute! A look at what's making news Monday in the Richmond region

A1 Minute! A look at what's making news Monday in the Richmond region

Jessica Gayed, 19, and brother Bishoy Gayed, 14, attached balloons and a poster on a fence at Quioccasin Middle School.

Caleb Arutyunyants, 14, a student at Quioccasin Middle School, laid flowers at the memorial for Lucia Bremer at the school.

Messages to 13-year-old Lucia Bremer, who was slain near Godwin High School on March 26, were left on the fence of the Quioccasin Middle School field on March 29.

Police investigate a shooting in the 1900 block of Hickoryridge Road Friday evening, March 26, 2021. A pathway leads to the parking lot at Godwin High School.

Friends of Lucia Bremer, who was slain on Friday, comforted one another as they laid flowers in the 1900 block of Hickoryridge Road on Saturday. 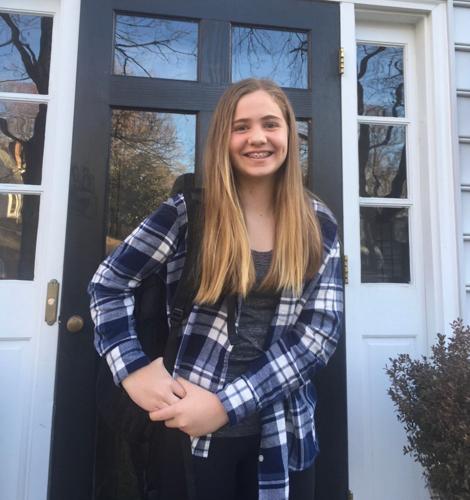 Lucia Bremer was 13 when she was fatally shot in March while walking with a friend near Godwin High School in western Henrico County.