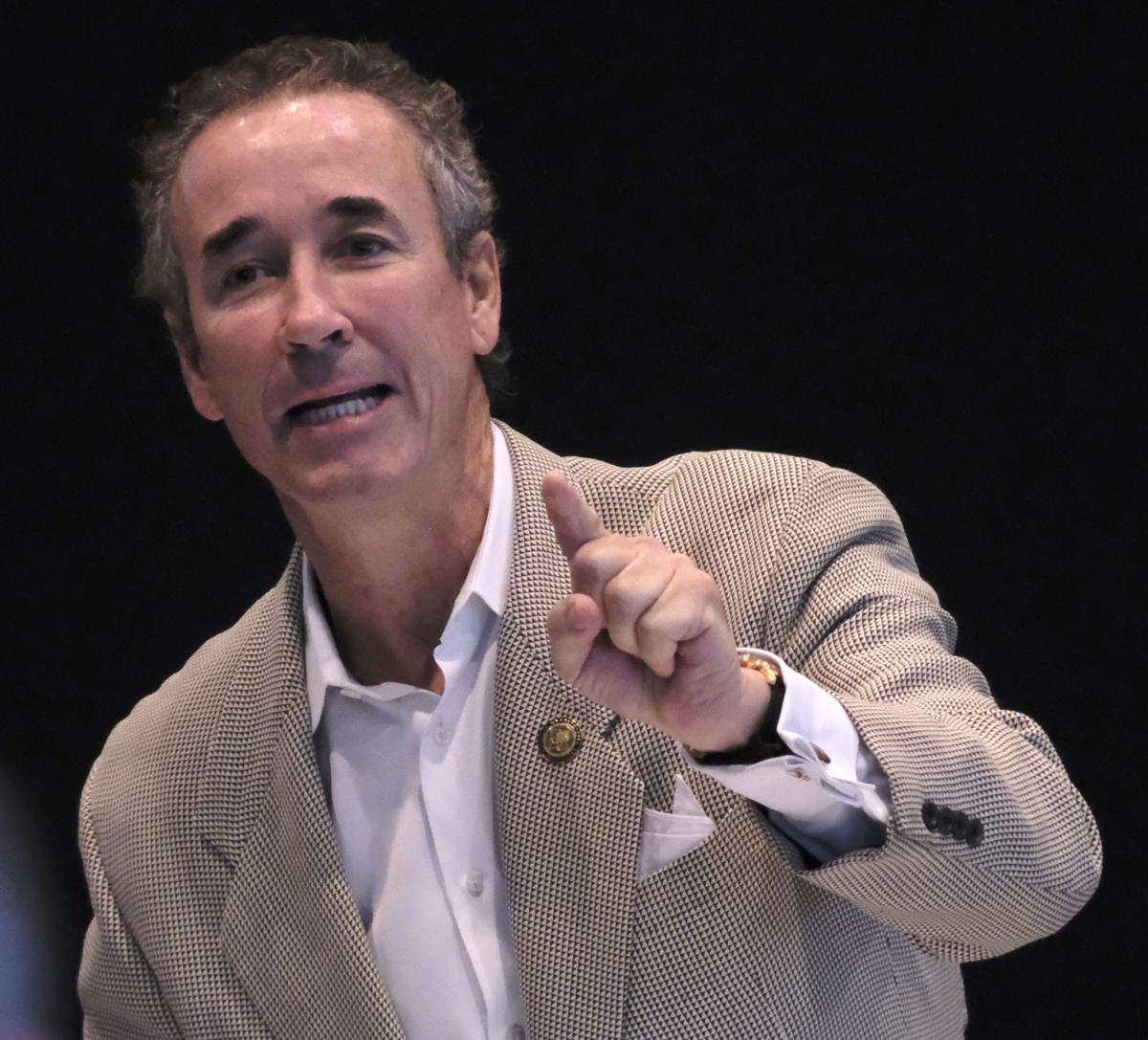 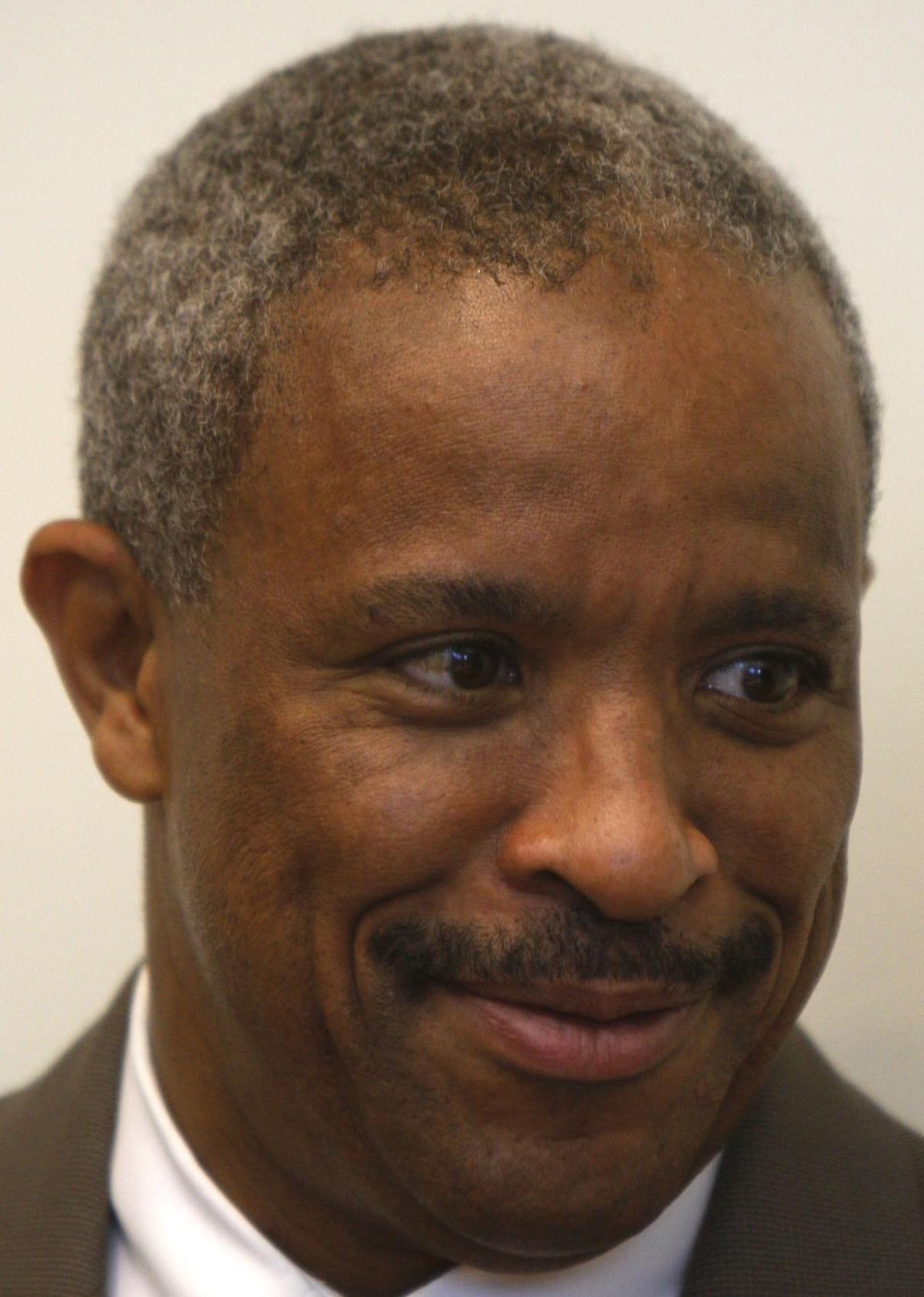 David Hicks, then a senior policy advisor in Richmond, during a press conference with the Coliseum Study Group in Richmond on Thursday, June 10, 2010. 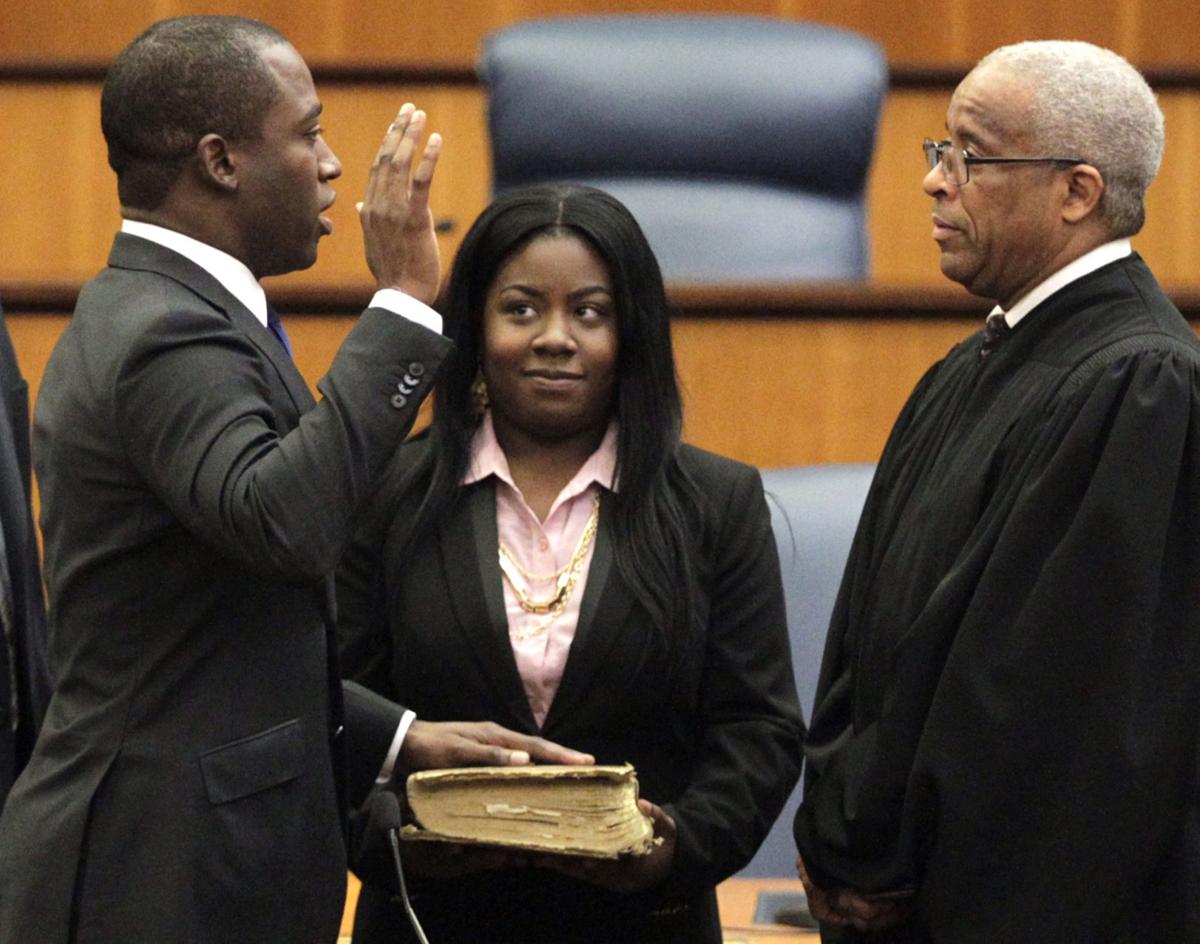 Levar Stoney takes the oath of office administered by the Judge David M. Hicks (right) to become mayor of Richmond shortly after noon on Saturday, Dec. 31, 2016. Holding the family bible is his sister, Nhandi Stoney.

A Richmond judge recused himself from a criminal case involving state Sen. Joe Morrissey after the lawmaker’s support of the judge’s reappointment raised concerns about potential conflicts of interest in Virginia’s system for appointing judges.

Judge David Hicks serves as chief of Richmond’s General District Court overseeing the Marsh courthouse in Manchester, and is up for reappointment to a second six-year term. On Tuesday, he said he has recused himself and the entire Richmond bench from Morrissey’s case and has asked the Virginia Supreme Court to appoint another judge for the upcoming Jan. 8 hearing.

Hicks referred all other questions to the attorneys in the case.

On Dec. 3, Morrissey was arraigned on three misdemeanor charges alleging violations of polling regulations after he interacted with voters and election officials inside a polling place last year.

Hicks took over Morrissey’s case after another judge, who is not up for reappointment, recused himself, citing Morrissey’s role as a lawmaker. In Virginia, the General Assembly appoints judges to the bench.

At an initial hearing on Dec. 4, Hicks asked if Morrissey’s defense or the special prosecutor appointed to the case had any objection with his hearing it; neither side objected.

A week later, Morrissey, D-Richmond, spoke highly of Hicks at a joint legislative committee hearing, where all judges seeking appointment were interviewed by video.

“I would like to strongly endorse Judge Hicks for reappointment,” Morrissey said toward the end of the Dec. 11 hearing, which was held virtually and spanned more than seven hours.

Then on Monday, Morrissey told the Richmond Times-Dispatch that another judge should hear his case, saying he’s known Hicks for 30 years. But Morrissey did not address any conflict he may have, adding that he would still vote for Hicks’ reappointment.

“I think that it would be appropriate that a different judge should be appointed who does not know me,” Morrissey, who is on vacation in Florida, said in a text message. “I will vote to reappoint him.”

The two men have a long history.

Hicks worked as an assistant prosecutor under Morrissey, then Richmond’s commonwealth attorney. In 1992, Hicks unseated his former boss in the Democratic primary for the constitutional office.

Hicks also worked as a policy adviser for then-Richmond Mayor Dwight Jones, whom Morrissey hoped to replace in a crowded 2016 election that saw Levar Stoney triumph.

On Monday, Morrissey also said Attorney General Mark Herring should prosecute the case against him, saying that the charges were politically motivated. Morrissey has dubbed the issue “Donutgate” because he’s accused of passing out doughnuts to poll workers and voters in violation of state code. The criminal complaint also alleges that Morrissey kept voters from casting their ballots on Nov. 5, 2019, while taking photos in the Powhatan Community Center.

Morrissey also denied that he did anything wrong or interrupted the voting process, saying that state code allows candidates to enter each precinct for up to 10 minutes.

A spokeswoman from Herring’s office said the office is not involved in the case.

“We’re not investigating or prosecuting the case,” Charlotte Gomer said.

The rest of the Richmond delegation on the joint committee — including Del. Jeff Bourne, Del. Delores McQuinn and Sen. Jennifer McClellan, all Democrats — also endorsed Hicks. None of them raised any issue at the time, but when asked about it by a Times-Dispatch reporter, Bourne and McClellan acknowledged that flaws with the appointment process lead to conflicts like in this case.

Virginia is one of only two states — South Carolina is the other — in which the state legislature appoints judges. The appointments won’t be voted on until the session that starts Jan. 13.

Bourne said potential conflicts can exist for any legislator who is a practicing attorney and who could appear in court before a judge for whom that legislator has voted. But he noted that the issue is more complicated when the lawmaker is a defendant before the judge.

“Regardless of what Virginia judge hears it, I expect they will do what is right and fair,” Bourne said. Acknowledging the small circle in which state politics in the capital city, as well as its legal community, operate, he added: “They all know each other. Those relationships don’t mean anything when you walk into a courtroom.”

Quentin Kidd, dean of the Christopher Newport University College of Social Sciences and director of its Wason Center for Public Policy, said the case reveals “the inherent potential conflicts of interest in how Virginia appoints its judges.

“Combine with that the fact that Virginia allows legislators to essentially police themselves and decide whether there is a conflict or not and whether it rises to the level that he should recuse himself,” Kidd continued. “It points to inherent weaknesses in Virginia ethics rules.”

Kidd said nothing in Virginia law would require Morrissey to recuse himself from voting on Hicks’ reappointment, if he were still hearing Morrissey’s case, or on any judge who might be appointed. In many other states, ethics codes “would demand it.”

“Judges have found themselves on the wrong side of politics often in Virginia,” Kidd said. “It puts both the judge and legislator in a tough spot.”

Kidd said the state has long needed “clearer guardrails with harsher penalties” for breaches. The closest the state got was in 2015, when the legislature attempted to tighten its rules surrounding gifts following a scandal that embroiled former Gov. Bob McDonnell and his wife. A year later, the body amended the law to fix several loopholes left open.

Kidd suggested that the judge who hears Morrissey’s case be someone who was appointed in the last legislative session to a bench far from Richmond. That way “you’re removing any geographical proximity for political conflict” and creating a time buffer, he said.

Carl Tobias, a law professor at the University of Richmond, said the rules requiring a judge’s recusal are only slightly more clear-cut.

Kidd and Tobias said it would be worthwhile for Virginia to reassess how it appoints judges. Most other states popularly elect judges. But that system is often criticized because it injects money into the judicial system, they said.

“There isn’t a perfect system,” Tobias said, but the current one clearly doesn’t work for Virginia: “Judges are too beholden to the legislature. There is a tension there that is tough.”

“Those conflicts are inherent in Virginia,” Kidd said. “They existed before these charges were brought against Sen. Morrissey. They will remain long after.”

“This plays right into Joe Morrissey as a candidate and character. His character is fighting the man,” Kidd said.

In 2014, Morrissey, then serving in the House of Delegates, entered an Alford plea and was convicted of a misdemeanor charge of contributing to the delinquency of a minor involving relations with his then-17-year-old office receptionist, Myrna Morrissey, who is now his wife and the mother of three of Morrissey’s six children.

After the conviction, Morrissey resigned his 74th House District seat, and then reclaimed it in a special election, serving the six-month jail term at night while also serving as a delegate by day during the 2015 General Assembly session.

His license was revoked in 2003, and the Virginia Supreme Court reinstated his license in 2012. A second revocation two years ago stemmed from his relationship with his wife.

A Henrico County man accused of killing his parents on Easter 2016, and who suffers from schizophrenia, was found “unrestorably incompetent” a…

David Hicks, then a senior policy advisor in Richmond, during a press conference with the Coliseum Study Group in Richmond on Thursday, June 10, 2010.

Levar Stoney takes the oath of office administered by the Judge David M. Hicks (right) to become mayor of Richmond shortly after noon on Saturday, Dec. 31, 2016. Holding the family bible is his sister, Nhandi Stoney.