This image released by the Richmond Police Department on July 6 shows firearms that authorities say are tied to a threatened mass shooting on Independence Day. Two men have been arrested. 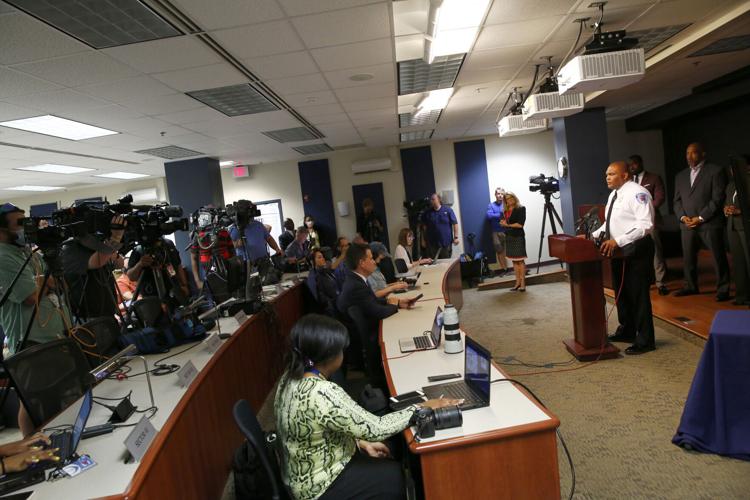 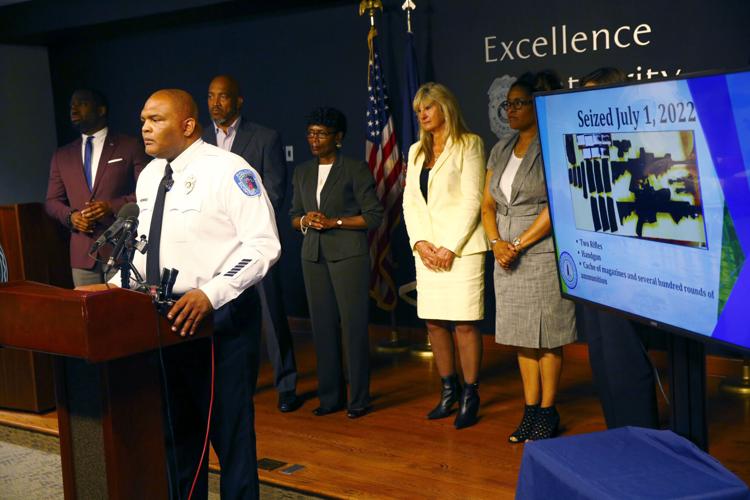 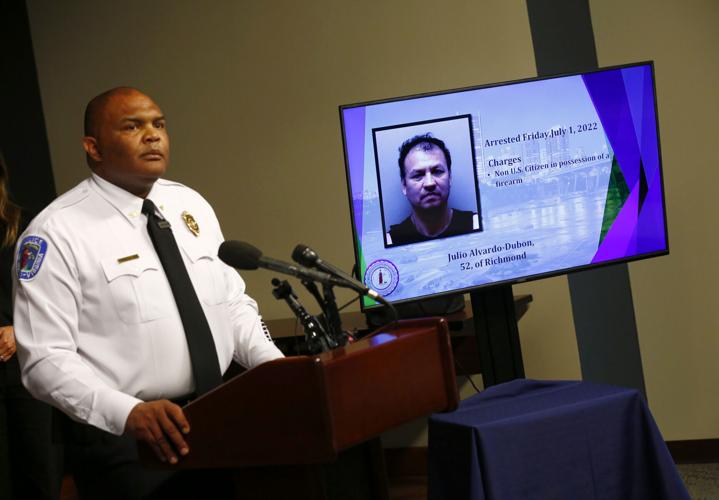 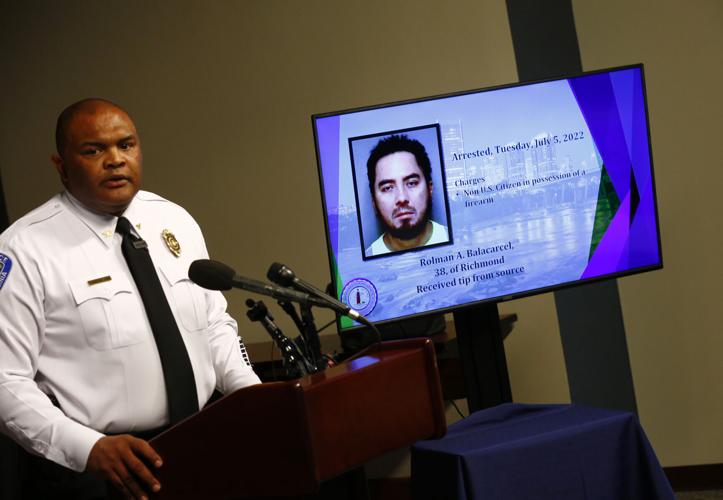 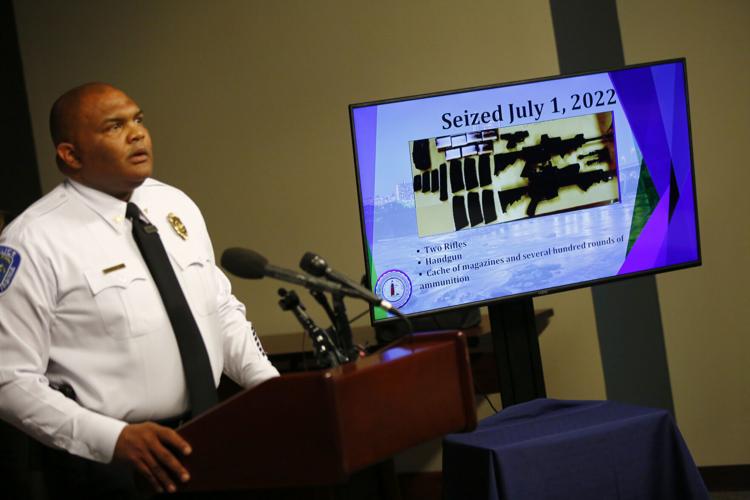 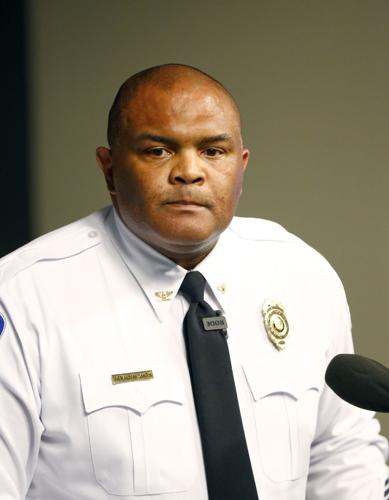 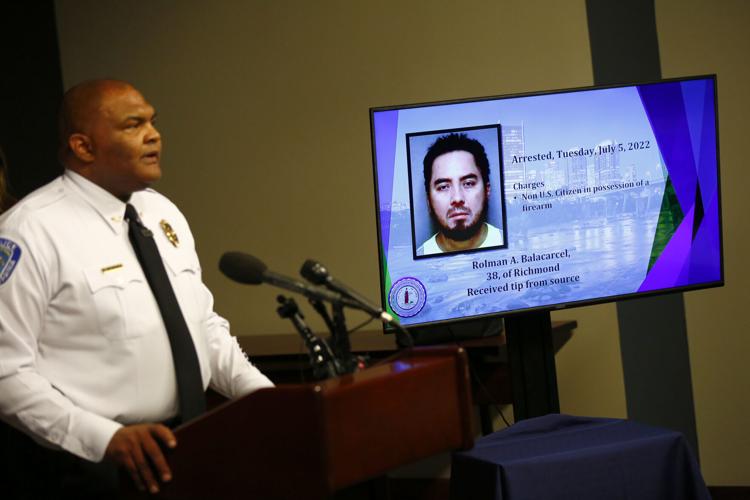 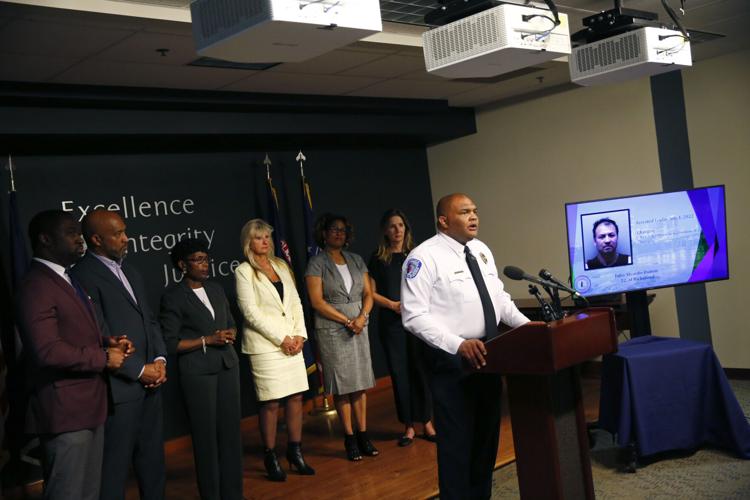 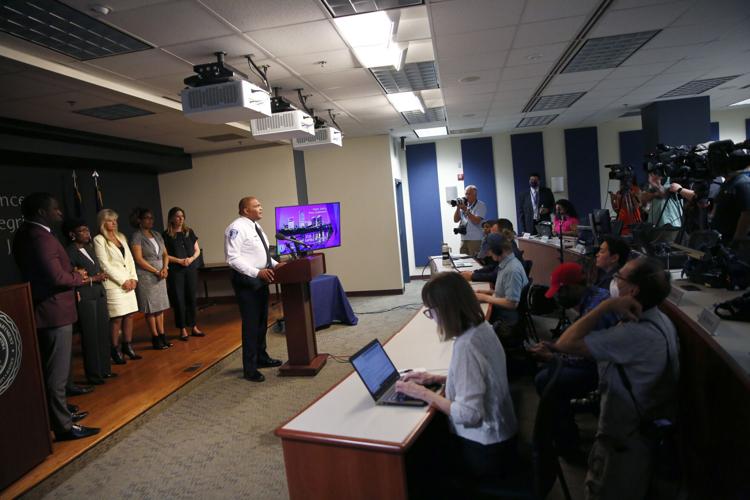 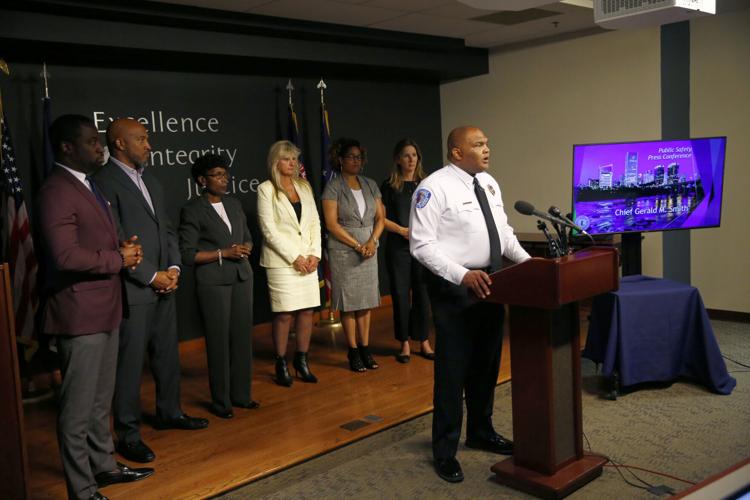 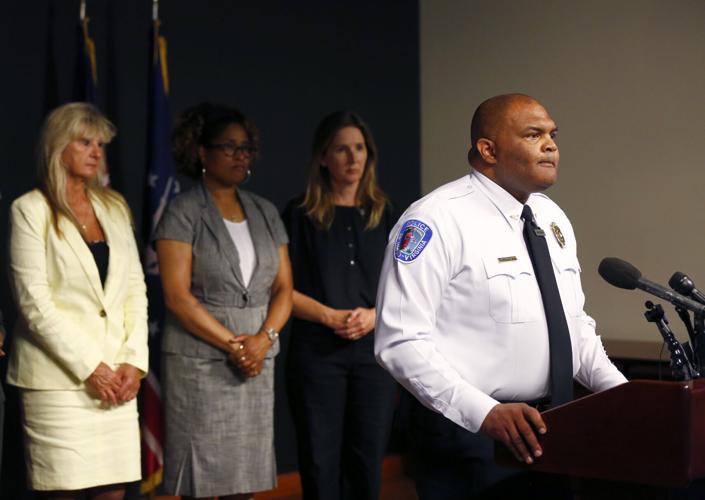 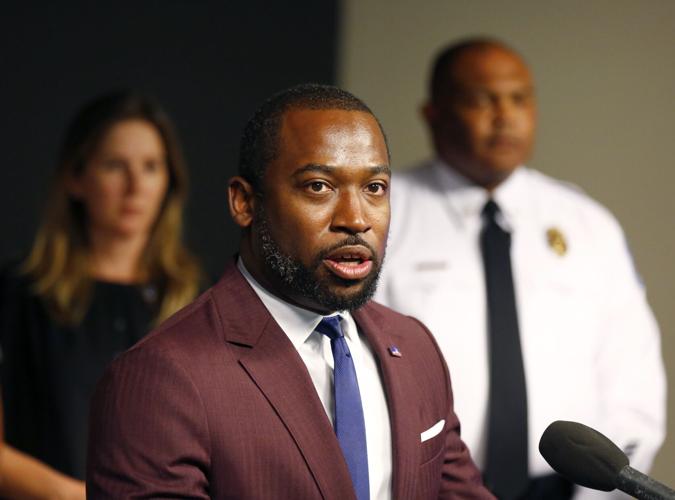 At Richmond police headquarters on July 6, Mayor Levar Stoney addressed the arrests and seizure of firearms that officials said had thwarted a planned mass shooting at the city’s crowded Dogwood Dell amphitheater on Independence Day.

Richmond police on Wednesday said a tip from a “hero citizen” prevented a mass shooting at the Dogwood Dell Fourth of July celebration Monday. Two men were arrested, and two assault rifles, a handgun and several hundred rounds of ammunition were seized in a South Richmond residence, authorities said.

The announcement came two days after a rooftop gunman opened fire during an Independence Day parade in suburban Chicago, killing seven in a massacre that wounded dozens of others.

Police in Richmond did not release information about a possible motive in the Dogwood Dell case. Police Chief Gerald Smith during a press conference Wednesday said an officer in the 2nd Precinct received the anonymous tip from a concerned citizen, who overheard a conversation regarding a mass shooting.

Officers and agents from the U.S. Department of Homeland Security investigated the information, which led them to a residence in the 3100 block of Columbia Street, Smith said. One of the occupants Friday allowed police to search the home, where several firearms were found out in the open, police said.

Police later arrested Julio Alvarado-Dubon, 52, of Richmond, who faces a preliminary charge of being a non-U.S. citizen in possession of a firearm. He is being held at Richmond City Jail without bond.

He faces the same preliminary charge as Alvarado-Dubon and is being held in Albemarle County Jail with no bond.

We must get illegal guns off the streets and have better gun control measures that ban assault rifles. But while @RichmondPolice is on the job we have a lieutenant governor @WinsomeSears posing with an assault rifle in a political ad. This is not the progress that Virginia needs. pic.twitter.com/0b8FxHhzHr

Police spokesperson Tracy Walker said both men are from Guatemala. Initial documents filed in General District Court in Richmond say both Alvarado-Dubon and Balacarcel are not in the U.S. legally. The documents, which say Alvarado-Dubon has an expired visa, did not include any details about the alleged plot.

Court documents note bond was set at $15,000 for Alvarado-Dubon on Wednesday, but it was unclear if he had been released. The documents say he has lived in the Richmond area for three years and works full time in the construction industry. He has a preliminary hearing scheduled in Richmond on Aug. 2. Alvarado-Dubon’s attorney, Jose Aponte, declined to comment Wednesday.

Smith said they’re unsure how the weapons were obtained, but the suspects did say their intent was to “conduct a mass shooting on the Fourth of July.”

He credited the officer in the 2nd precinct and the person who provided information with preventing the shooting.

“There is no telling how many lives this hero citizen saved from one phone call,” Smith said. “It is the responsibility of law enforcement that if we hear something, that we do something, and that is the message I would like to get out there — that ‘see something, say something’ works.”

‘A constant state of vigilance’

The Dogwood Dell event, which featured music and fireworks, was held despite the threat.

Isaiah Cabino, 23, of Richmond, was at the Dogwood Dell event Monday and said the crowds spanned all the way to the Fan.

Cabino, who was with his partner, said he has gotten into the habit of looking for exits and places to hide when going out in public, a routine he said feels common for a generation that’s grown up in an era of mass shootings.

And in the wake of a Fourth of July parade shooting in a Chicago suburb, Cabino was already uneasy about Monday night.

“It was a constant state of vigilance,” said Cabino, a 23-year-old Richmond resident. “This reality is not OK. You shouldn’t have to go to these events with an expectation of potentially being shot ... The sense of inaction by all levels, both the federal and state level, it’s something that’s not sustainable, especially for kids and folks in my generation.”

While music played and people settled into their chairs around 9 p.m. Monday night, Kristin Dittmann sat with her spouse on the curb of Pump House Drive waiting for the fireworks to begin.

“It was dark and crowded. Chaos and terror would have ensued,” said Dittmann, 63. “We must now recognize that we’re not safe anywhere from gun violence. Guns are everywhere in this country, and what few regulations we have are falling away by the day.”

Smith said police “had a very robust plan” for security for Dogwood Dell. He said they also were monitoring The Diamond, which had fireworks Friday night.

In the Illinois shooting, hundreds were sent fleeing after gunfire erupted in Highland Park. Robert E. Crimo III was charged with seven counts of murder Tuesday.

In Richmond, a pair of shootings occurred on Independence Day: one incident occurred at a business on Broad Street in which four men and two women were injured. Another person was shot and killed at the City Dogs Restaurant on Main Street the same night.

I’m at Richmond police HQ where officials will discuss how officers thwarted a potential mass shooting attempt over the Fourth July weekend.

Smith said the pattern of violence has to end.

“It’s just got to stop,” said Smith. “You know, I may be the police chief, but I’m also a citizen. It’s ridiculous. At some point in time, this has got to stop.”

“We need more,” Stoney said during the press conference, “More policies to keep people safe, so these firearms, these weapons of war don’t get in the hands of the wrong people.”

When asked if he believes Richmond police have enough resources to continue to prevent tragedies from occurring, Stoney said he and the City Council have taken steps. The city approved a $17 million public safety plan that included pay hikes for police and firefighters and funding for the city’s gun buyback program.

Stoney said he’s also had conversations with the Commonwealth’s Attorney Colette McEachin about how to help in this effort, but the justice system is just one piece of the solution.

“We can’t just be tough on crime and say investing law enforcement is the only answer. We also have to be tough on the root causes of crime,” said Stoney.

“Whether you’re at home in your cul-de-sac or in your neighborhood or in a park or at a parade, out dining — you have to keep your head on a swivel,” Stoney said. “And that’s not the country that I know I desire to live in ... but those are the facts of the matter at this moment.”

Information from The Associated Press contributed to this report.

For the 12th consecutive season, the Flying Squirrels enjoyed a sold out ballpark to celebrate the holiday. With nearly 10,000 fans in attendance Monday night, Parnell described the evening as an all-hands-on-deck occasion.

An Alexandria man is facing charges after a customer at City Dogs restaurant on West Main Street was shot to death on Sunday night.

Police on Thursday released the identity of a passenger who was thrown from a vehicle during a rollover crash in Hanover County on Wednesday.

News of the fundraising haul comes as Youngkin prepares to set out around the country boosting GOP candidates in the midterm elections.

A “concerned citizen” who tipped Richmond police off about a mass shooting planned on Monday at Dogwood Dell told investigators that one of the suspects showed him two rifles, a red dot sight and a “longer higher caliber gun” with a kickstand on June 21, according to a court affidavit filed Thursday.

The Times-Dispatch obtained the report through a Freedom of Information Act request. The fire department would not hand over a copy of the investigation report last week.

With hundreds of millions of dollars at stake, the federal government wants Virginia to establish an electric vehicle fast charging network. B…

Court records filed so far in the case make no mention that Dogwood Dell was the intended target of the mass shooting, as police announced last week.

Nothing in Virginia Code requires the Richmond mayor’s office to answer the question why these records won’t be made public, according to Alan Gernhardt, the executive director of the Virginia Freedom of Information Act Advisory Council.

This image released by the Richmond Police Department on July 6 shows firearms that authorities say are tied to a threatened mass shooting on Independence Day. Two men have been arrested.

At Richmond police headquarters on July 6, Mayor Levar Stoney addressed the arrests and seizure of firearms that officials said had thwarted a planned mass shooting at the city’s crowded Dogwood Dell amphitheater on Independence Day. 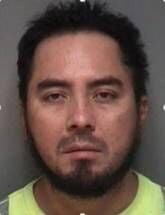 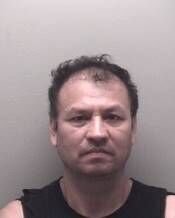 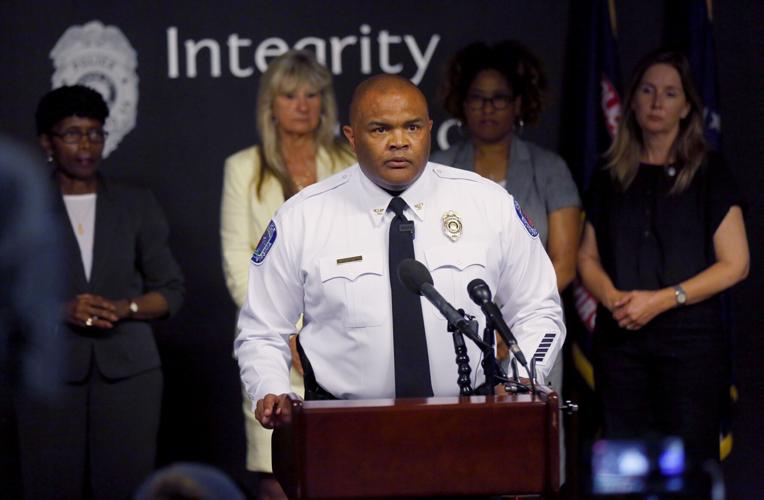