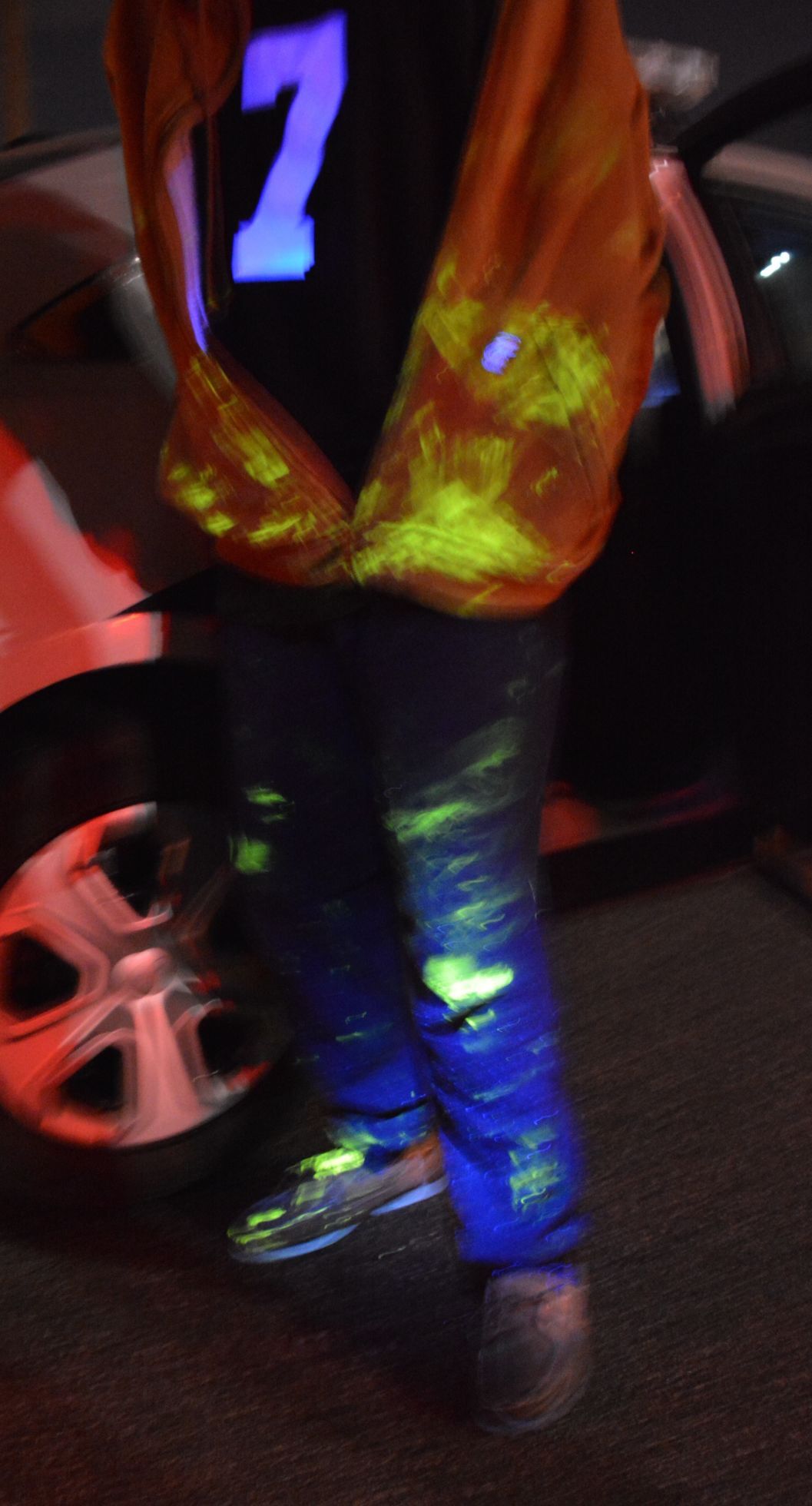 Authorities said this image shows burglary suspect Christopher S. Gaines with SmartWater markings on his clothing. The liquid can only be seen with UV light. 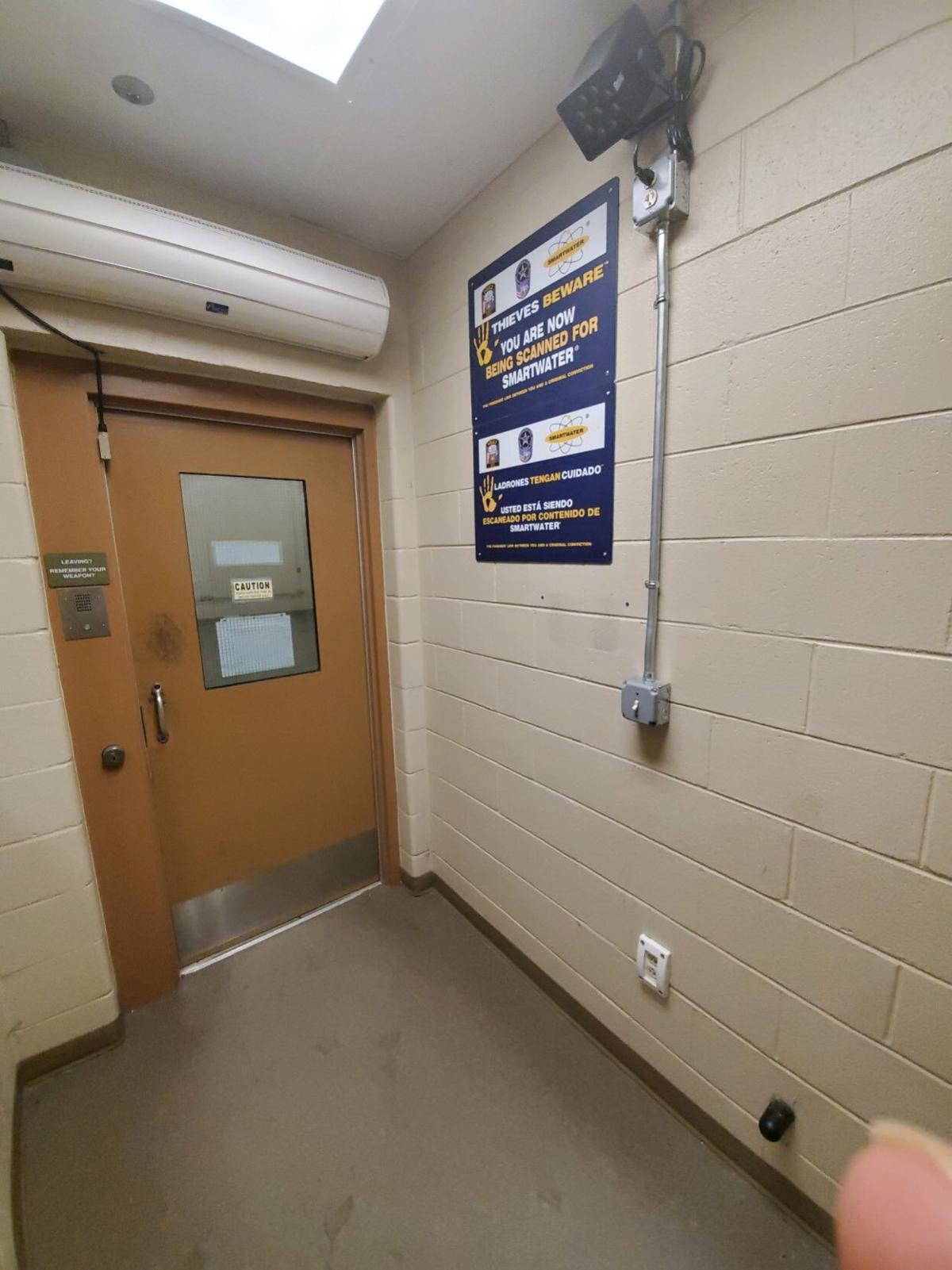 Each person arrested in Chesterfield and brought to the county jail is scanned with a detection lamp for evidence of "SmartWater" liquid on their person or clothing. 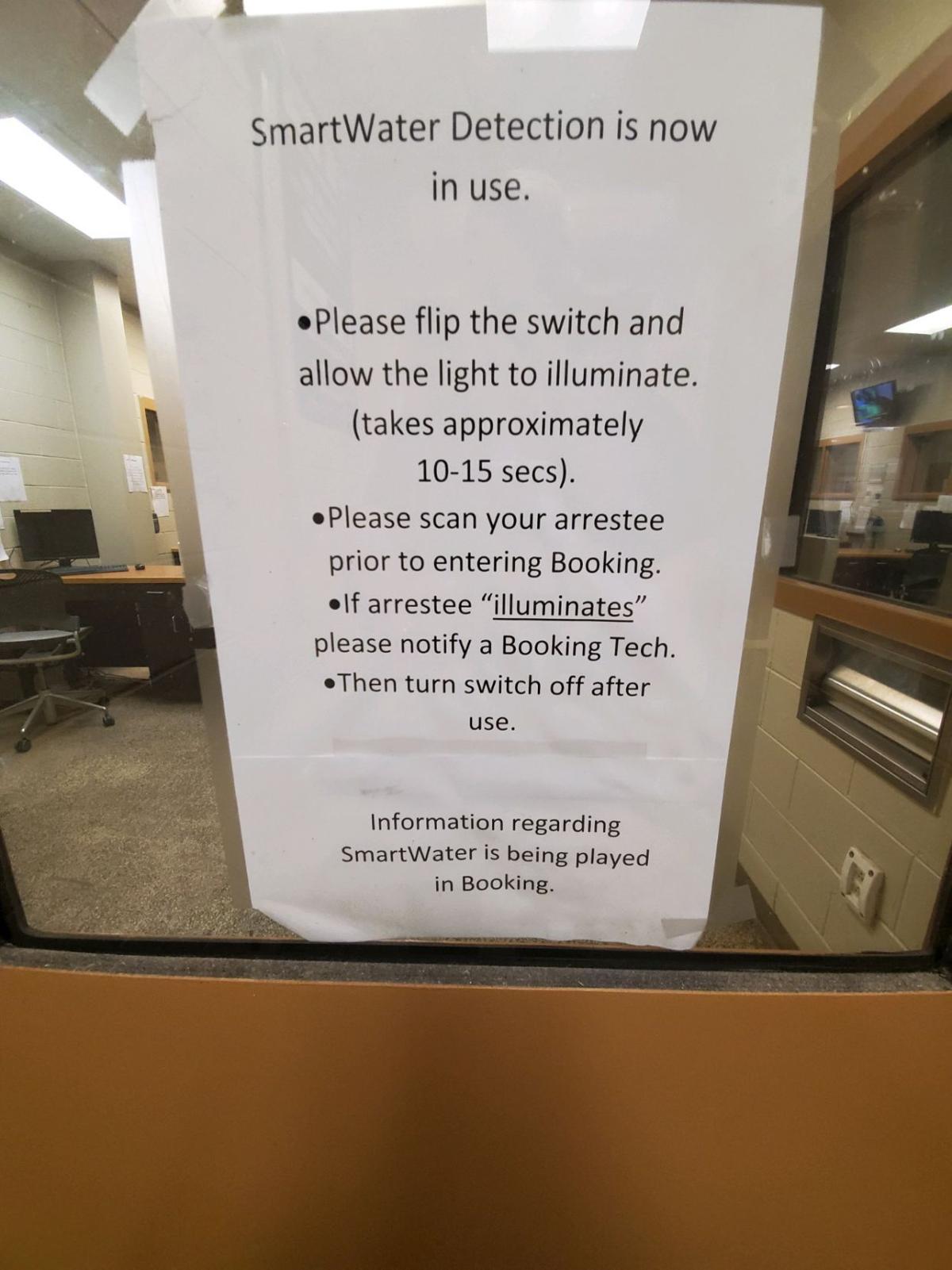 This sign posted in the Chesterfield Jail instructs deputies to scan all prisoners who enter for traces of "SmartWater" liquid on their persons or clothing.

A Petersburg man indicted in the burglary of an Ettrick business is the first person in Virginia to be charged with a crime based on the use of a liquid nanotechnology known as SmartWater CSI — a substance residents or merchants can use to mark property that could be stolen.

A Chesterfield County grand jury handed down indictments Monday charging Christopher S. Gaines, 52, with burglary, felony petit larceny third offense and wearing a mask to hide his identity in connection with an April 11 break-in at the Ettrick Deli at 3608 E. River Road.

Gaines was confirmed as a suspect after police, using a special ultraviolet light, observed that his clothing was covered with smears of a colorless and odorless liquid that he had come in contact with when he allegedly entered the business.

The substance, known as SmartWater, is a traceable liquid that is coded with a forensic technology that contains a unique signature for each user. When brushed or sprayed on, it is undetectable except by ultraviolet light, where it glows yellow-green.

Every person arrested in Chesterfield is now scanned for traces of SmartWater on their person, clothing or belongings, as the county — through the police and sheriff’s departments — has expanded use of the technology.

The Sheriff’s Office, which operates the Chesterfield Jail, installed a SmartWater detection camera in a small vestibule where all new prisoners pass through before they are booked on charges.

“Once in that small area, the arresting officer will activate the detection lamp which takes seconds and looks for the telltale signs,” said Sheriff Karl Leonard.

In the Gaines case, police responded about 11 p.m. on April 11 to an alarm at the Ettrick Deli, which had been burglarized several times in previous months. After the earlier break-ins, Chesterfield police equipped the business with SmartWater, along with a “delivery system” that can invisibly mark suspects.

Chesterfield police declined to identify the delivery system, but said they have several types that include spray devices and “contact” systems. They can be used in commercial businesses in conjunction with alarm systems, or on the street in response to such crimes as property thefts from vehicles.

When officers arrived at the business, they located a man who police said ignored verbal commands and fled on foot. After a brief pursuit, the man — later identified as Gaines — was apprehended. Using the special ultraviolet light on the street, officers discovered that the man’s clothing and other items were pocked with SmartWater.

The SmartWater liquid stays on property for a minimum of five years. More than 200 households throughout Chesterfield — primarily in the Bensley, Bayhill Pointe and Mason Woods communities — have used the liquid to mark their various belongings, police said. Police typically seek to have residents use the substance in neighborhoods where burglaries have been a problem.

When applied, the liquid provides information to police about that item’s place of origin. Law enforcement can then use this provenance information in court when an arrest is made.

So far, the Chesterfield Police Department is the only law enforcement agency in Virginia to use the technology with SmartWater CSI, a company that originated in England 25 years ago.

The company came to the U.S. in 2013 and initially focused on the Miami-Dade County, Broward County and Palm Beach County areas in Florida to “prove that the technology would work just as well in the U.S. as it did over in Europe,” said Randy Butschillinger, the company’s law enforcement sales and training manager.

SmartWater is used by 40 to 50 localities in that section of Florida, including in Boynton Beach, where Chesterfield Police Chief Jeffrey Katz served as chief before coming to Chesterfield in January 2018.

“We’re in over 70 neighborhoods in Boynton Beach, and that was when he was down there as the police chief,” Butschillinger said. “And they averaged 38% reductions in burglaries.”

When Katz was hired by Chesterfield, Butschillinger urged him to begin a SmartWater program in the county — and the chief did so within six months. The department invested $10,000 in start-up costs for a five-year contract, which includes signs and kits for homeowners in targeted neighborhoods to mark 60 to 80 items; officer training; products for police covert operations; and analysis of recovered property marked by the liquid.

The company is now working to expand in other Southern states; Butschillinger will make a presentation later this summer to the Virginia Association of Chiefs of Police.

“When you’re the new kid on the block, so to speak, it takes a little bit of time to get people to understand what the technology and the programs can do for them — but also accepted enough to invest in a program,” Butschillinger said.

SmartWater has had some notable successes in other parts of the country.

In September 2018, SmartWater played a role in the arrest of a Tulare County [California] Superior Court employee who was charged with stealing money from her co-workers.

After employees began to notice money missing from their purses and wallets, investigators applied the liquid to $1,000 in “bait cash” that was left out for the suspect to steal. The thief was then observed taking the money while under surveillance, and she deposited it into an ATM.

The employee was scanned and traces of SmartWater were found on her body. Subsequent analysis found that the forensic code, unique to each bottle of the liquid, was a match for the water applied to the cash.

In addition to that case, SmartWater was used to mark hundreds of pieces of agricultural equipment in 11 California counties, which led to the arrest of several agricultural thieves.

Authorities said this image shows burglary suspect Christopher S. Gaines with SmartWater markings on his clothing. The liquid can only be seen with UV light.

Each person arrested in Chesterfield and brought to the county jail is scanned with a detection lamp for evidence of "SmartWater" liquid on their person or clothing.

This sign posted in the Chesterfield Jail instructs deputies to scan all prisoners who enter for traces of "SmartWater" liquid on their persons or clothing.