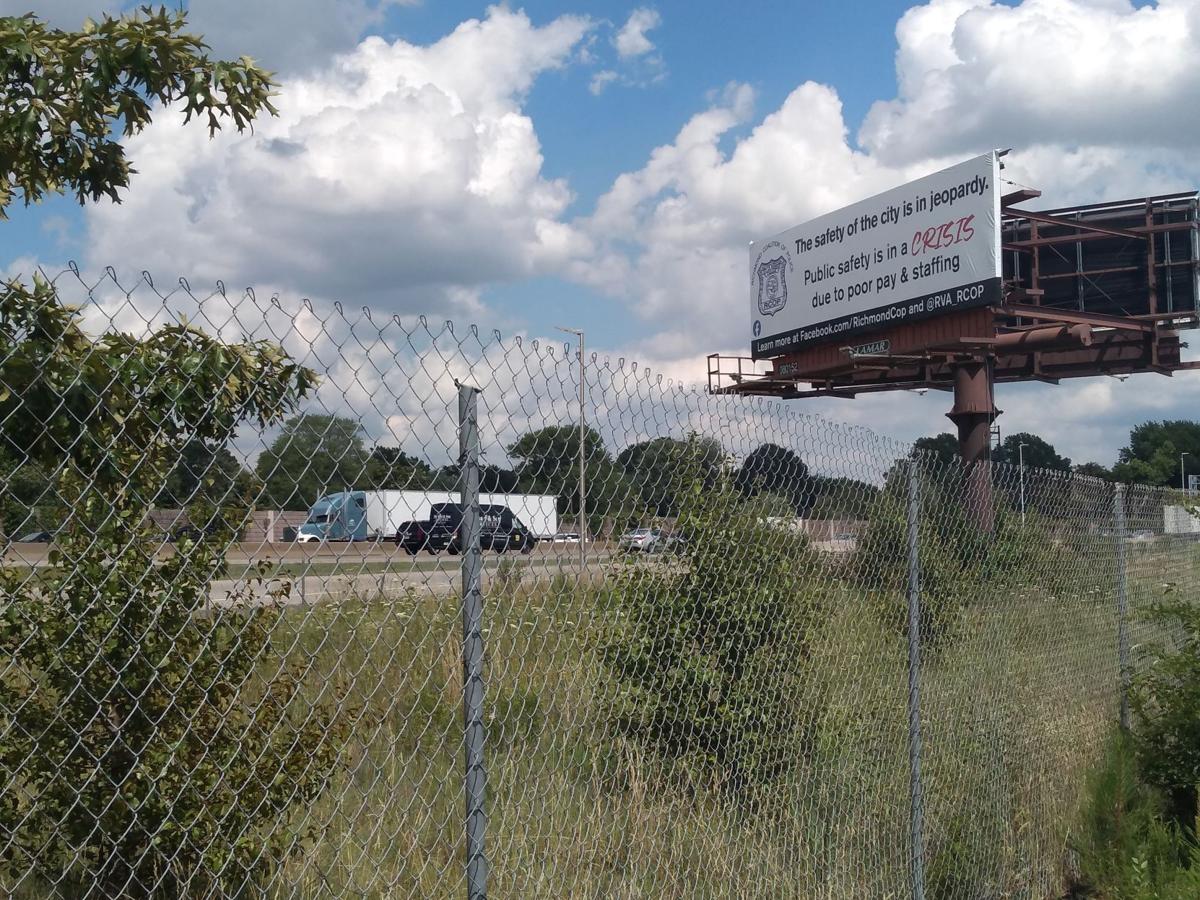 A Richmond Coalition of Police billboard along Interstate 95/64 reads in part: “The safety of the city is in jeopardy.” 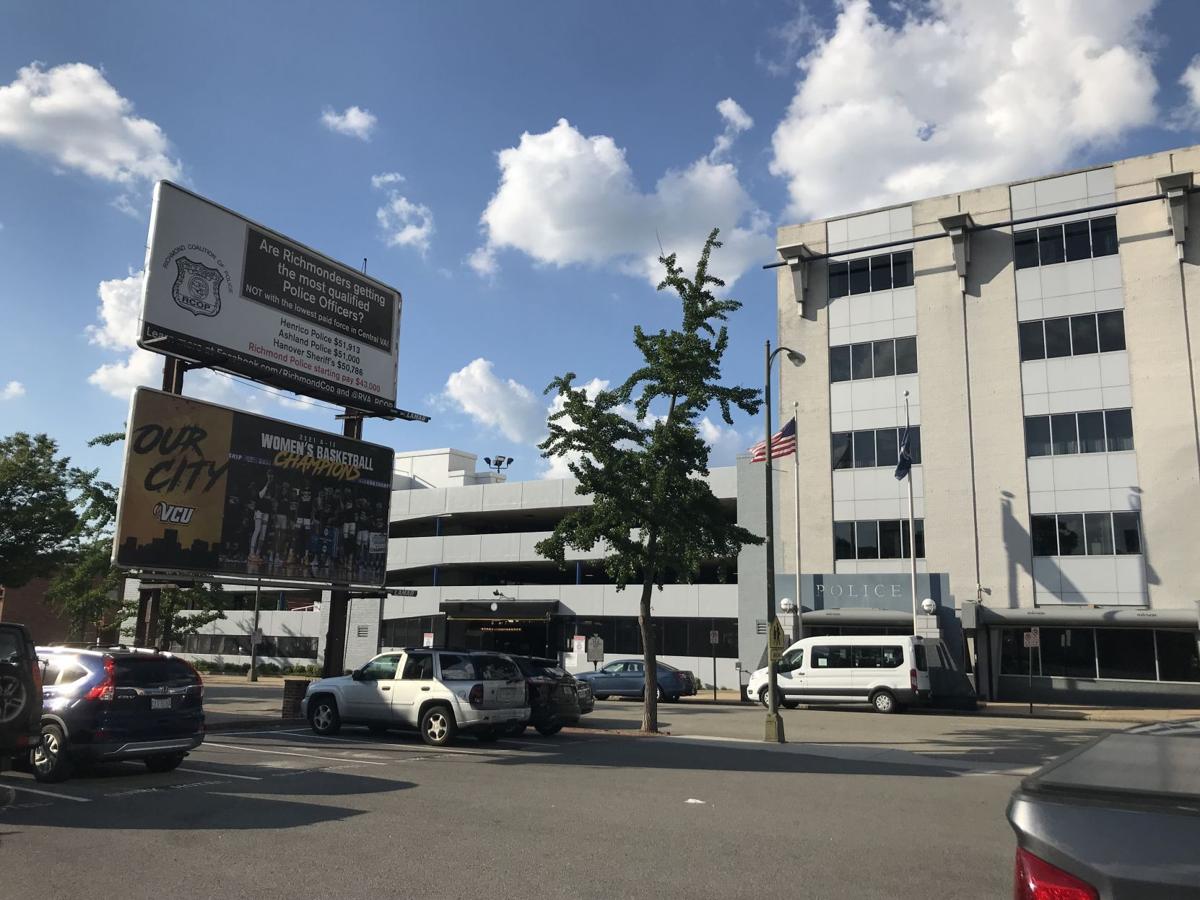 This Richmond Coalition of Police billboard is across from Richmond police headquarters on West Grace Street. It reads in part: “Are Richmonders getting the most qualified Police Officers? NOT with the lowest paid force in Central VA!”

While indirectly addressing two critical billboards from the local police organization, Police Chief Gerald M. Smith said violent crime is up in Richmond compared with 2020, but is lower than in prior years.

Richmond’s violent crime is up nearly 18% compared with this time last year, which Smith called “the asterisk year” during a news conference Monday because lockdowns related to COVID-19 kept folks home and drove down crime in 2020.

When compared to pre-pandemic years, violent crimes — homicides, rapes, robberies and aggravated assaults — are currently below year-to-date levels dating back to at least 2016, according to data provided Monday.

Smith has promised to deliver quarterly crime analyses, but said Monday that he decided to hold this briefing a few weeks early — this quarter runs through the end of the month — because “there have been some indications about our crime and about crime and safety here in Richmond, and I think that we should give you a perspective on that. The total perspective, how it looks, and that lets Richmonders know they are safe here.”

Later, it became clearer that Smith was addressing two billboards advertising concerns that the Richmond Coalition of Police, an organization that represents about half of the city’s sworn officers, has about low pay and staffing shortages.

One billboard, viewable from southbound Interstate 95/64 just past the Arthur Ashe Boulevard exit, reads: “The safety of the city is in jeopardy. Public safety is in a CRISIS due to poor pay & staffing.”

“There are others who are saying and putting up other things and saying and putting signs that give the impression that Richmond is not safe to come, live, work, play or do business,” Smith said during Monday’s news conference, adding that the implication isn’t reflected in the historical data.

“We are not saying that violent crime isn’t going up,” he said. “We are giving you a depiction of the overall, big picture. It is going up as compared to the asterisk year 2020.”

A second RCOP billboard, located directly across from Richmond police headquarters on Grace Street, says: “Are Richmonders getting the most qualified Police Officers? NOT with the lowest paid force in Central VA!” Then it gives the salaries of officers in Henrico, Ashland and Hanover and the starting pay of $43,000 for Richmond police.

“I think they just insulted my officers,” Smith said of the billboard across the street, drawing a distinction between the coalition and police. “RCOP is not part of RPD.”

The group represents almost 350 Richmond police officers, according to a statement it released Monday, and its president, Brendan Leavy, is a Richmond detective.

At full capacity, the department can have 750 sworn officers. It is currently understaffed, Smith acknowledged.

The collective of city police officers and firefighters lobbied the City Council to overhaul the city’s pay scale system. Council members funded a study of the plan, on top of a 3.25% pay raise for all employees and additional increases for some. But RCOP says it’s not enough to overcome “the pay differential” between Richmond and neighboring counties.

Smith attributed the increase in violent crime to three factors: the proliferation of guns, the mental health and emotional strain on society during COVID, and the lack of trust the community has with police.

Smith’s presentation included several initiatives targeting these areas, specifically building trust. The department has reintroduced community walks with several more planned this month, given officers business cards to hand out to those making reports, and added the office of professional accountability and an external advisory board.

“This work, there is no end to this,” he said of community outreach efforts. “This is where we start.”

A pedestrian was fatally struck by a car Wednesday night along West Broad Street in Henrico County, according to police.

A Richmond Coalition of Police billboard along Interstate 95/64 reads in part: “The safety of the city is in jeopardy.”

This Richmond Coalition of Police billboard is across from Richmond police headquarters on West Grace Street. It reads in part: “Are Richmonders getting the most qualified Police Officers? NOT with the lowest paid force in Central VA!”