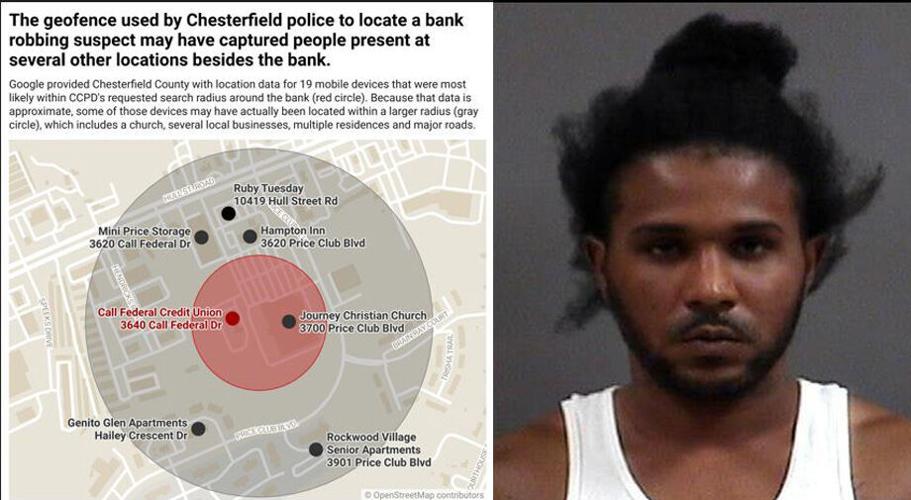 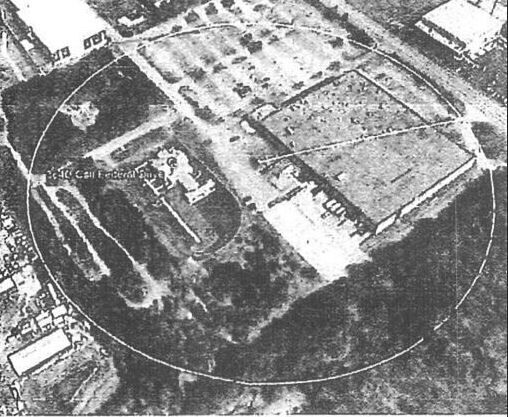 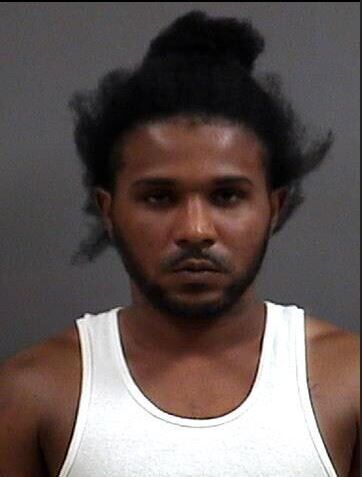 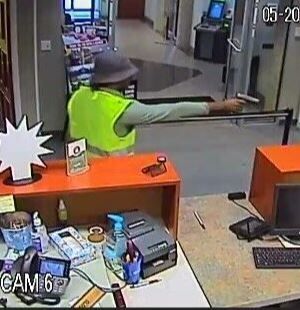 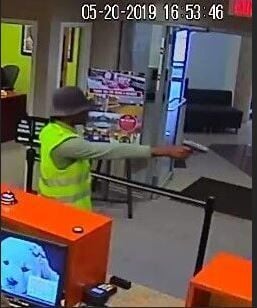 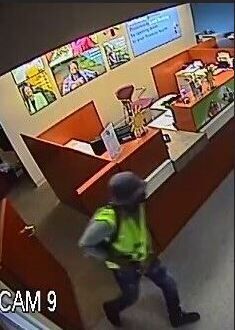 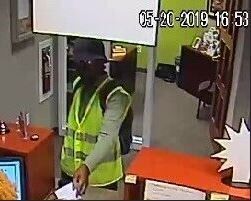 A Richmond man who terrorized four bank employees and a customer at gunpoint, herding them into a back room before forcing them to their knees, was sentenced in federal court Wednesday to nearly 12 years in prison for a $196,000 bank heist that was solved with Google location data from his cellphone.

Following a sentencing hearing that capped nearly three years of litigation in state and federal courts, Judge M. Hannah Lauck sentenced Okello T. Chatrie, 27, to 141 months in prison for the May 20, 2019, armed robbery of the Call Federal Credit Union at 3640 Call Drive in Chesterfield County.

The judge denied a defense request for a downward variance in punishment of 130 months. “Too many victims,” she said from the bench. But the term she imposed was at the low end of discretionary federal sentencing guidelines, which called for an active term of between 141 and 155 months. Chatrie also will get credit for the nearly three years he’s already served.

The case, which had been watched nationally, tested the constitutionality of a “geofence” warrant that allowed Chesterfield police to obtain Google location records of 19 cellphones near the bank at the time of the heist. Chatrie’s phone was among them.

Chatrie is a Jamaican national who immigrated to the U.S. with his family in 2018 as a legal permanent resident, a status he’ll lose with his federal conviction. He’ll likely be deported after finishing his term.

Assistant U.S. Attorney Kenneth Simon Jr. urged the court to impose a punishment at the top of the guidelines due to the violent nature of the robbery, which involved Chatrie threatening the lives of five bank employees and one customer at gunpoint after forcing them to their knees.

“This is a premeditated robbery,” Simon told the court. “He went in there to terrorize those folks and get money.”

‘I know where you live’

Chatrie entered the bank 10 minutes before closing, stood briefly in line and then passed a note to a teller demanding a minimum of $100,000. His note read, in part, “I got your family as hostage and I know where you live. If you or your coworker alert the cops or anyone else your family and you are going to be hurt.”

After the teller said she didn’t have access to that kind of money, Chatrie pulled a Taurus 9mm semiautomatic pistol that he had purchased legally 21 days earlier from Bob Moates Sports Shop in Chesterfield. Waving around the firearm, Chatrie then directed the teller and other bank employees, along with one bank customer, to move to the center of the lobby and get on the floor.

Once there, he led the victims behind the counter and into a back room that contained the bank’s safe. Chatrie then forced the bank’s manager to open the safe and place $195,000 into a bag he brought with him. After getting $196,932 in cash, Chatrie left the bank on foot and traveled toward an adjacent business west of the bank.

“It’s very terrifying,” bank manager Kevin Caldwell testified as he narrated a surveillance video of the holdup played in court. “It seemed unreal at first.” But once it sank in, “Then it got a little more terrifying.”

Chatrie hit the jackpot, apparently by chance. The bank had a larger supply of cash than usual to load the ATMs the following day.

Following the robbery, Chesterfield police Detective Joshua Hylton interviewed witnesses and obtained bank surveillance video of the holdup. In viewing the footage, Hylton noticed that when the robber first walked into the bank, he appeared to be holding a cellphone to the side of his face. To Hylton, this suggested the man could have been speaking with a co-conspirator.

After pursuing two other leads that went nowhere, Hylton turned to geofence technology, and applied for and received a geofence warrant roughly three weeks after the holdup.

The warrant drew a geofence with a 150-meter radius (a diameter of 300 meters, longer than two football fields) in an area that encompassed 17.5 acres. The warrant sought data for every device present within the geofence from 4:20 to 5:20 p.m. on the day of the robbery.

Cost of settlements for 2020 protest lawsuits rises to $1.6 million for Richmond

In keeping with Google’s protocol, the geofence warrant described a three-step process by which police would attempt to narrow down the list of users for which authorities would obtain the most invasive information.

Google turned over location data for 19 devices without providing any identifying information. Police then narrowed down the request to three devices, for which Google provided the information. Based on their analysis of the data, detectives arrested Chatrie on Aug. 13, 2019 — nearly three months after the holdup.

Police recovered $102,293, including bills wrapped and signed by the bank teller and a Taurus 9mm pistol during a search of his residence.

The case was transferred to federal court in Richmond, where Chatrie’s lawyers and the federal public defender office, along with the National Association of Criminal Defense Lawyers, argued that geofence warrants are “digital dragnets” that violate the Fourth Amendment’s prohibition against unreasonable searches and seizures.

But federal prosecutors strongly defended the propriety of the geofence warrant, writing in a legal brief that Chatrie had chosen to have Google keep a record of where he went with his cellphone in order for Google to provide him with location-based services. As a result, his presence at the bank robbery was stored in a database that Google accesses freely to provide services to it users and advertisers.

In a 63-page opinion issued March 3, Lauck ruled the geofence warrant was unconstitutional in this specific case because it failed to establish probable cause to search every one of the 19 people within the targeted area.

But the judge denied Chatrie’s lawyers’ request to suppress the evidence produced by the warrant, finding the detective was not at fault because he had acted in good faith by consulting with prosecutors before applying for the warrant and relied on his experience in obtaining similar warrants.

Lauck ruled that the “good faith” exception to the Fourth Amendment exclusionary rule, which prevents the government from using most evidence gathered in violation of the Constitution, shields the evidence by the geofence from suppression. The U.S. Supreme Court found in 1984 that evidence should not be suppressed if an officer acts in “good faith” when carrying out a warrant that is later determined to be invalid.

Chatrie then pleaded guilty May 9 to armed robbery and use of a firearm in the holdup.

Chatrie has been diagnosed as suffering from post-traumatic stress disorder and recurrent major depressive disorder as a result of the trauma he suffered while living in Jamaica as a child and young man, his attorney, public defender Laura Koenig, told the court.

The defendant was born in Spanish Town, Jamaica, which was overrun with uncontrolled violence and poverty, with street gangs carrying out killings in Chatrie’s community. At age 5, Chatrie saw people being murdered as he walked home from school, the attorney wrote in a sentencing memorandum.

Cost of settlements for 2020 protest lawsuits rises to $1.6 million for Richmond

Chatrie’s mother was attacked violently by four men and hospitalized for two weeks, and after several years, she became sick and eventually died. Chatrie held his mother’s head in his lap when she took her last breath. He was devastated by the loss and “has never been able to get any professional help for the enduring grief he suffers from,” the attorney wrote.

Until his federal conviction, Chatrie had no criminal record, and Koening said the bank robbery case is a “complete aberration” for him. One of the bank tellers described Chatrie during the holdup as being “unorganized, scared and sweaty,” and she feared he might accidentally shoot bank employees from being so nervous, Koening said.

The judge, who said she took into account Chatrie’s “brutal childhood,” ordered that he receive mental health counseling in prison with an emphasis on trauma.

Collection: Previous episodes of 8@4 from The Times-Dispatch

A former Virginia police officer who pleaded guilty to storming the U.S. Capitol with another off-duty officer deserves to avoid a prison sent…

Woman quit her job amid pandemic and launched The Patchwork Punk

On a busy Sunday afternoon, Liz Scott chatted with customers about her wares at the Lakeside’s Local Makers Market.

The harmful algae blooms are growing at Lake Anna.

Are the department's excuses merely a cop-out?

When it comes to whether a casino should be built in Petersburg or Richmond, one of nation's most influential media tycoons in the center of t… 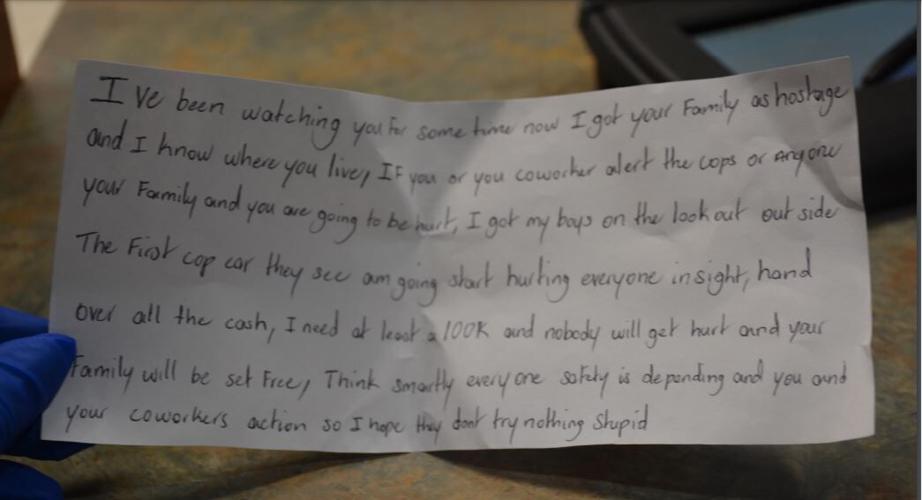 Federal prosecutors said this note was used by Okello Chatrie to rob the Call Federal Credit Union in Chesterfield County of $196,932 in May 2019. 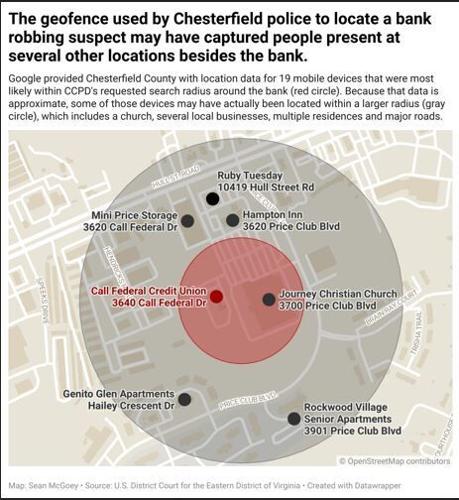