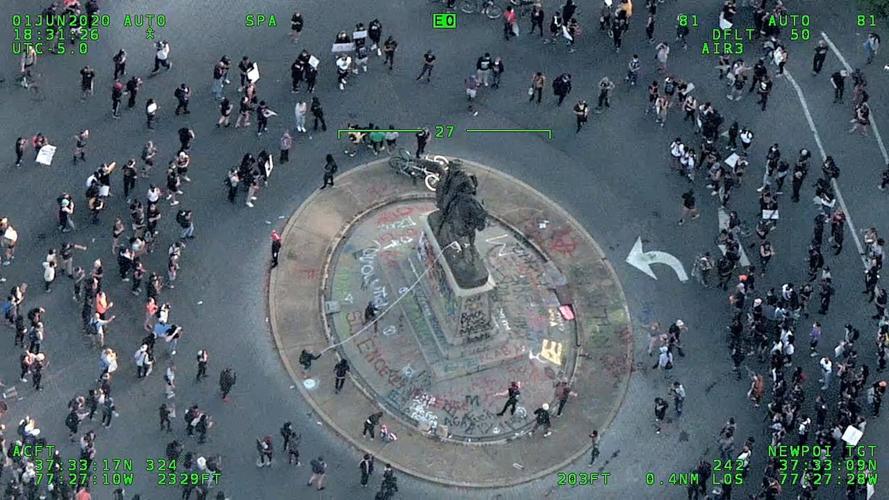 Police recently released aircraft surveillance video of the protests around the JEB Stuart monument on Monument Avenue on June 1, 2020. At the time, Richmond police said they needed to deploy tear gas to protect themselves from violent protests. Earlier this month, the department retracted that statement, saying gas wasn’t necessary. 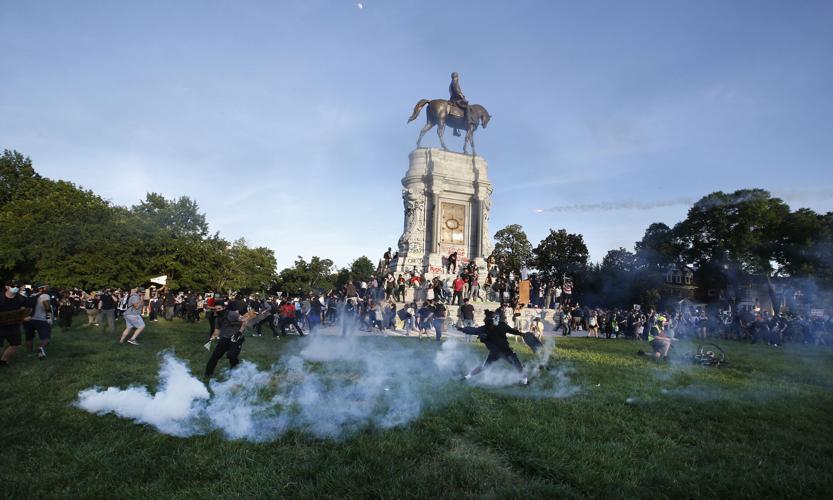 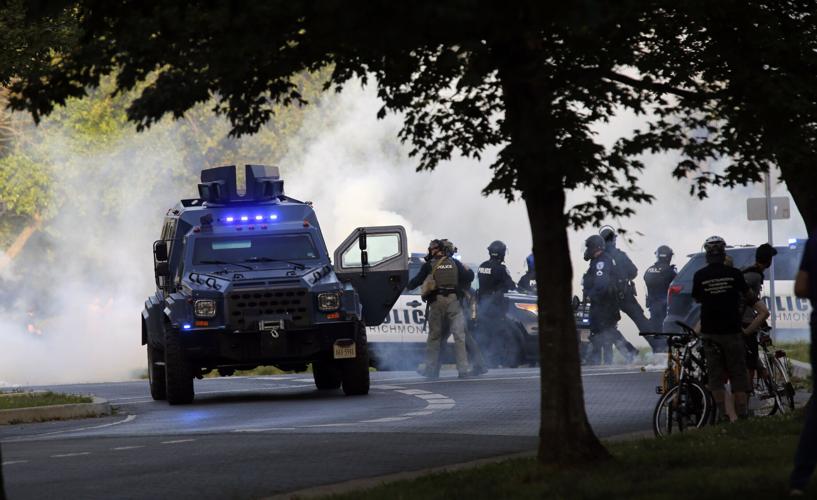 A State Police tactical vehicle is surrounded by a cloud of tear gas at the Lee Monument on Monument Ave. in Richmond, VA, Monday, June 1, 2020..

Richmond’s top prosecutor said Friday that she will not pursue criminal charges against police officers for their handling of protests at the Robert E. Lee and J.E.B. Stuart monuments two years ago. 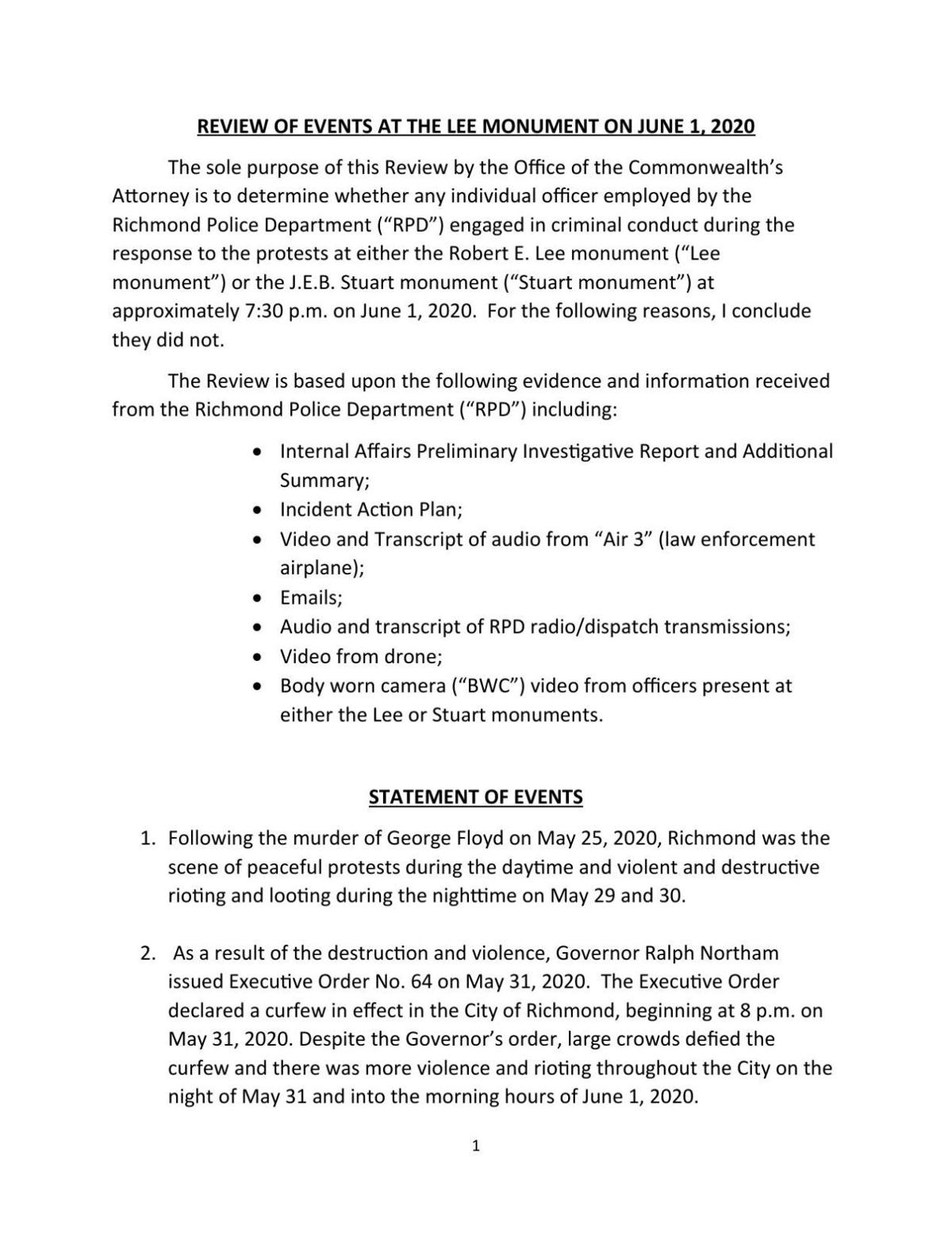 Commonwealth’s Attorney Colette McEachin in a statement said: “There is no criminal liability or culpability for any individual officer who appropriately followed an order in the chain of command that was lawful but, with hindsight, in error.”

Calls to representatives of the Richmond Police Department and Mayor Levar Stoney were not immediately returned Friday night.

Police on June 1, 2020, deployed tear gas on a crowd that gathered at the monuments after the killing of George Floyd by a Minneapolis police officer the week before. The use happened before an 8 p.m. curfew took effect. The curfew was established after two previous days of looting and other violence.

Police recently said the use of chemical agents was not warranted and apologized. Police Chief William Smith also resigned.

Body cam videos, police documents and other records related to the case are being made public by the Library of Virginia. The release is part of a legal settlement between the city and plaintiffs who say police used excessive force.

McEachin on Friday released a seven-page review of materials related to the case, including a timeline of events. It pointed to confusion on police radio traffic about what was happening at the two monuments about 500 feet apart from each other.

“The overwhelming majority of the conversations simply referred to ‘the monument.’ This lack of clarity contributed to the overall confusion and chaos,” the report said.

The timeline said two men climbed atop the Stuart monument and used hacksaws on the legs of the statue’s horse at 7:31 p.m. Two others threw a rope on the statue.

Police department leaders, which included Smith, approved a request from a sergeant to use tear gas or oleoresin capsicum spray, referred to in the report as “OC gas.”

But neither the sergeant or others specified at which location a chemical agent was authorized, the report said.

“The authorization to deploy OC gas had nothing to do with the 8 p.m. curfew,” the document said. “Officers did not deploy OC gas to preempt the curfew, which had not yet gone into effect for that night. OC gas was mistakenly deployed at the Lee monument because of the dangerous conduct that was actually occurring at the Stuart monument.”

Having received permission to deploy tear gas, an officer threw a canister into the crowd at the Lee statue at around 7:35 p.m.

The McEachin report comes after the library recently released footage of the police response to the unrest. The Richmond Times-Dispatch during an unrelated news conference on Wednesday asked Stoney about the footage.

Police initially had said the use of chemical agents was necessary to keep officers safe. Richmond police this month retracted their statement from two years ago, saying “it does appear, at the time tear gas was initially dispersed at the Lee monument, that the crowd was peaceful.”

McEachin, who was elected in November 2019, said the conduct of protesters, the large crowd at the Lee statue, and ambiguity and confusion in police communications were the primary factors that led to officers’ decision-making.

“The officers who deployed the OC at both the Lee and Stuart monuments did so only after receiving a lawful order and authorization,” McEachin wrote.

Although no single officer was deemed accountable in McEachin’s view, she said Smith was held responsible for his orders to deploy the gas “by being removed from office on June 16, 2020.”

“It is deeply unfortunate that, given the multiple levels of miscommunication and confusion detailed above, no one in command was able to observe the entire circumference of the Lee statue during those four minutes, realize that no one was on top of that statue or trying to pull it down, and reevaluate the situation prior to OC being deployed at the Lee monument,” the report said.

Incubus and Sublime with Rome

Richmond police later recovered one of the guns in a homicide investigation, authorities said in court documents.

Jihad Bryant, 27, faces multiple charges including first-degree murder, conspiracy to commit murder and felony use of a firearm.

Boy, 15, charged with homicide after crashing into car, killing driver, while fleeing armed robbery in Chesterfield

Video released by police show a deeply scrutinized moment from a perspective never before seen. The images contrast the narrative told by police, a lawyer says.

Watch now: Before being sent to prison, Midlothian woman made video about her tragic choices leading to fatal DUI crash

Kaylin Stine will be spending the next seven years of her life in a state prison.

Thirty Virginia legislators have called on the Biden administration to take action on behalf of Asim Ghafoor, a friend and former lawyer of sl…

The death is being investigated as a homicide with assistance from the Louisa County Sheriff's Office.

The remains were discovered after authorities received a call just after 5 p.m. April 29 from residents collecting trash near the recreation center at 9411 Staple Lane in Mechanicsville.

The driver in a Chesterfield truck crash has died, Virginia State Police said.

Archeologists make new discovery in the ancient city of Pompeii

Archeologists make new discovery in the ancient city of Pompeii 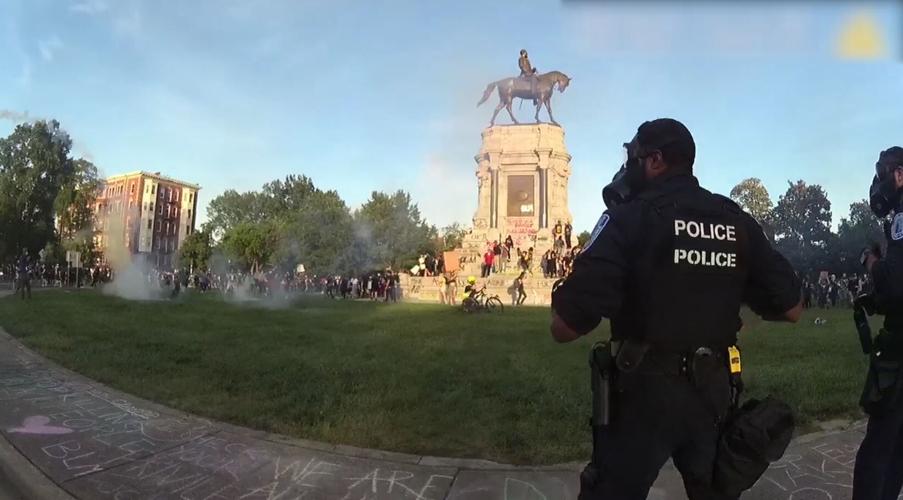 Protesters at the Robert E. Lee statue scattered after Richmond police deployed chemical irritants on them on June 1, 2020.

Police recently released aircraft surveillance video of the protests around the JEB Stuart monument on Monument Avenue on June 1, 2020. At the time, Richmond police said they needed to deploy tear gas to protect themselves from violent protests. Earlier this month, the department retracted that statement, saying gas wasn’t necessary.

A State Police tactical vehicle is surrounded by a cloud of tear gas at the Lee Monument on Monument Ave. in Richmond, VA, Monday, June 1, 2020.. 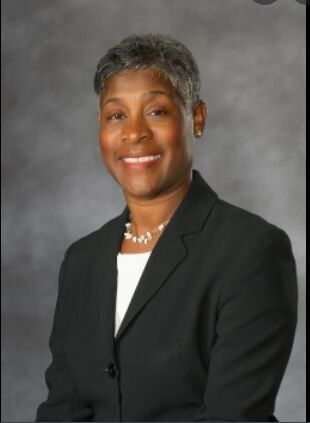