Subscribe
Read Today's E-Edition
Share This
Settlement reached in civil suit stemming from June 1, 2020, teargassing of demonstrators at the former Lee Monument
0 Comments
Share this
1 of 3 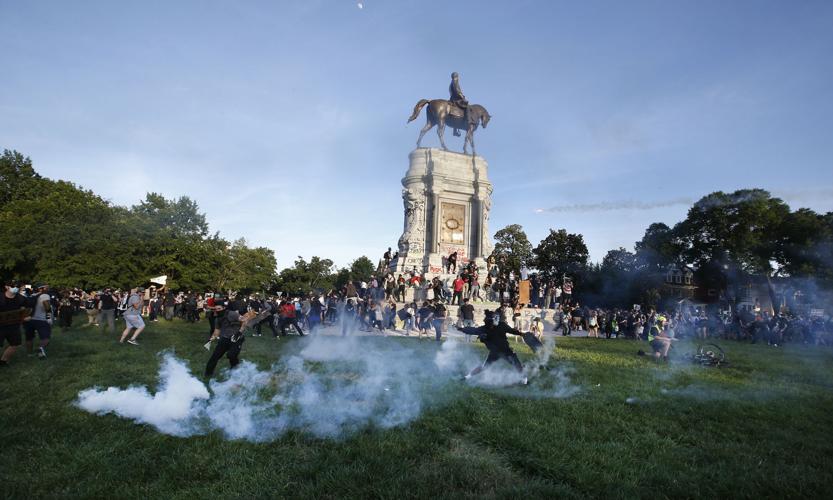 The Richmond Police Department’s use of tear gas during a June 1, 2020, protest at the Robert E. Lee monument prompted a class action lawsuit. 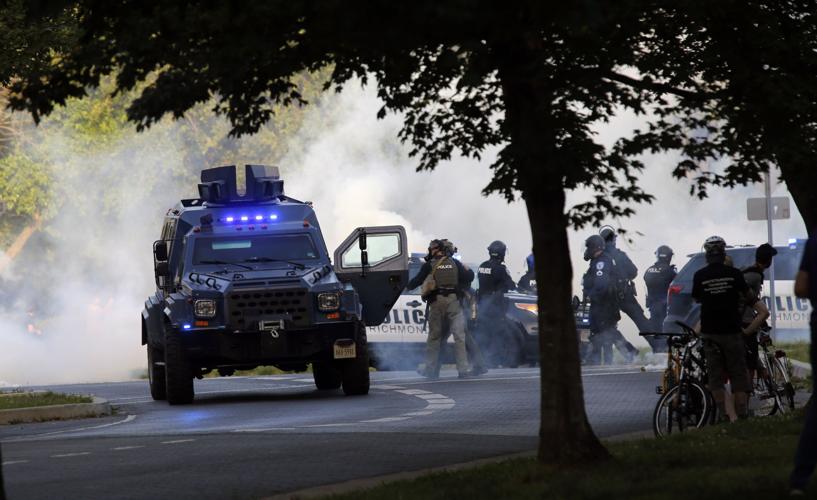 A state police tactical vehicle was surrounded by a cloud of tear gas at the Lee statue on Monument Avenue in Richmond on Monday.

A settlement has been reached in a civil lawsuit filed about two weeks after Richmond police officers tear-gassed a crowd of demonstrators — many of them kneeling with their hands in the air — at the foot of the former monument to Gen. Robert E. Lee on June 1, 2020.

Attorney Andrew Bodoh, with the civil rights and personal injury law firm of Thomas H. Roberts & Associates PC, filed lawsuits on behalf of six people who were among protesters when, unprovoked and without warning, police unleashed chemical irritants on them.

The initial complaint alleged violations of the protesters’ First Amendment, Fourth Amendment and 14th Amendment rights and assault, battery and gross negligence by the officers, who remained unidentified as part of a protective order that expires in July.

Though he couldn’t disclose the terms, Bodoh said Thursday that the plaintiffs — Richmond residents Jarrod and Megan Blackwood, Ryan Tagg, Christopher Gayler, Keenan Angel and Jonathan Arthur, an attorney with the same firm — reached an agreement with the city earlier this month, and that it opens the same possibility for others who were also at the protest.

“With this settlement, we are now positioned to take on the claims of other protesters who were in Lee Circle at the time the police officers engaged the crowd,” Bodoh said. “We expect the city to offer fair and prompt settlements to these individuals in order to avoid the expenses of additional lawsuits against the city.”

Bodoh said the firm had already met with a number of other individuals, but there were thousands of people, including families with children, in the crowd on June 1, 2020. Chemical irritants had cleared the circle and surrounding area about 20 minutes ahead of the 8 p.m. curfew.

Neither the police department nor Stoney has provided a full accounting of what happened that night. But in an op-ed Stoney penned for The New York Times on the anniversary of George Floyd’s death, he said the tear gas “had been used unintentionally.” His spokesman Jim Nolan said an internal investigation revealed the firing of tear gas was “a mistake caused by miscommunication during a chaotic moment in the city that evening.”

Nolan said city officials would not elaborate on what happened, citing the ongoing legal cases against the city and its police department.

Court documents filed in this suit provide insight into that miscommunication.

A motion filed by Bodoh in April 2021 included excerpts of police radio traffic starting about 15 minutes before police officers descended on the former site of the Lee monument. But the radio traffic indicated issues at a separate monument a block away at Stuart Circle, where protesters were trying to cut and pull down the statue.

At 7:30 p.m., an officer called over the radio twice asking: “Are we free to use gas? Are we clear to use chemical agents?” court documents state.

“Ten-four,” responded an unidentified voice a minute later, according to the court documents.

“Several officers celebrated the order, and expressed that they understood they were authorized to use chemical agents on the assembly,” the motion continued. Meanwhile, radio traffic from near the Lee monument reported that “all was orderly.”

In the intervening four minutes, more than 50 police officers descended on the Lee monument, “when the communications all point to a threat at Stuart Monument,” Bodoh said in the motion.

When tear gas was deployed at 7:35, only 25 officers had their body-worn cameras activated at the time. Six others were activated after 7:40 p.m. after gas had already dispersed most of the crowd, according to court documents.

“It appears that none of the officers that actually launched or threw tear gas had cameras operating, as though there was a pre-arranged plan to that effect,” the motion said.

A protective order issued by the court has prevented additional disclosure of facts of the case, but it expires July 1.

Anyone present at the Lee monument protest can visit the firm’s website at protestrva.robertslaw.org/ or call (804) 783-2000 for more information about the case.

The city did not respond to requests for comment Thursday.

Human remains found earlier this month off Jefferson Davis Highway in Chesterfield County have been identified as belonging to Cody Graham, wh…

Judge: Chesterfield detective who altered search warrants is charged with crime that doesn't exist in Va.

The ex-officer's attorneys have filed a motion to have the charge dismissed.

The Chesterfield Commonwealth's Attorney's Office dropped charges Tuesday against the mother of a boy found dead last year in a freezer at the family's home.

A Richmond physician and two doctors who formerly practiced in Hanover County have agreed to pay $50,000 and $100,000, respectively, for issuing prescriptions for controlled substances that were not for legitimate medical purposes, the U.S. Attorney's Office announced Thursday.

“For 27 years, this has been home. Nobody has ever displayed that kind of anger or hate to us,” said restaurant owner Tony Sappal.

"This is not your run-of-the-mill straw purchase," Assistant U.S. Attorney Stephen Miller told the court.

Leroy Kenneth Johnson originally was charged with rape, abduction with intent to defile, strangulation causing injury and possession of a firearm by a felon.

The 9mm handgun was loaded with five bullets, including one in the chamber, authorities said.

The Richmond Police Department’s use of tear gas during a June 1, 2020, protest at the Robert E. Lee monument prompted a class action lawsuit.

A state police tactical vehicle was surrounded by a cloud of tear gas at the Lee statue on Monument Avenue in Richmond on Monday.