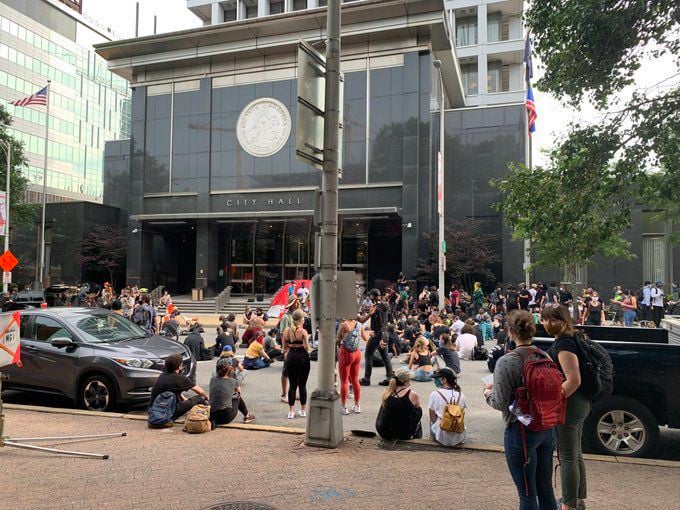 Protesters gathered outside City Hall in downtown Richmond in June to demonstrate against police brutality and racial injustice. 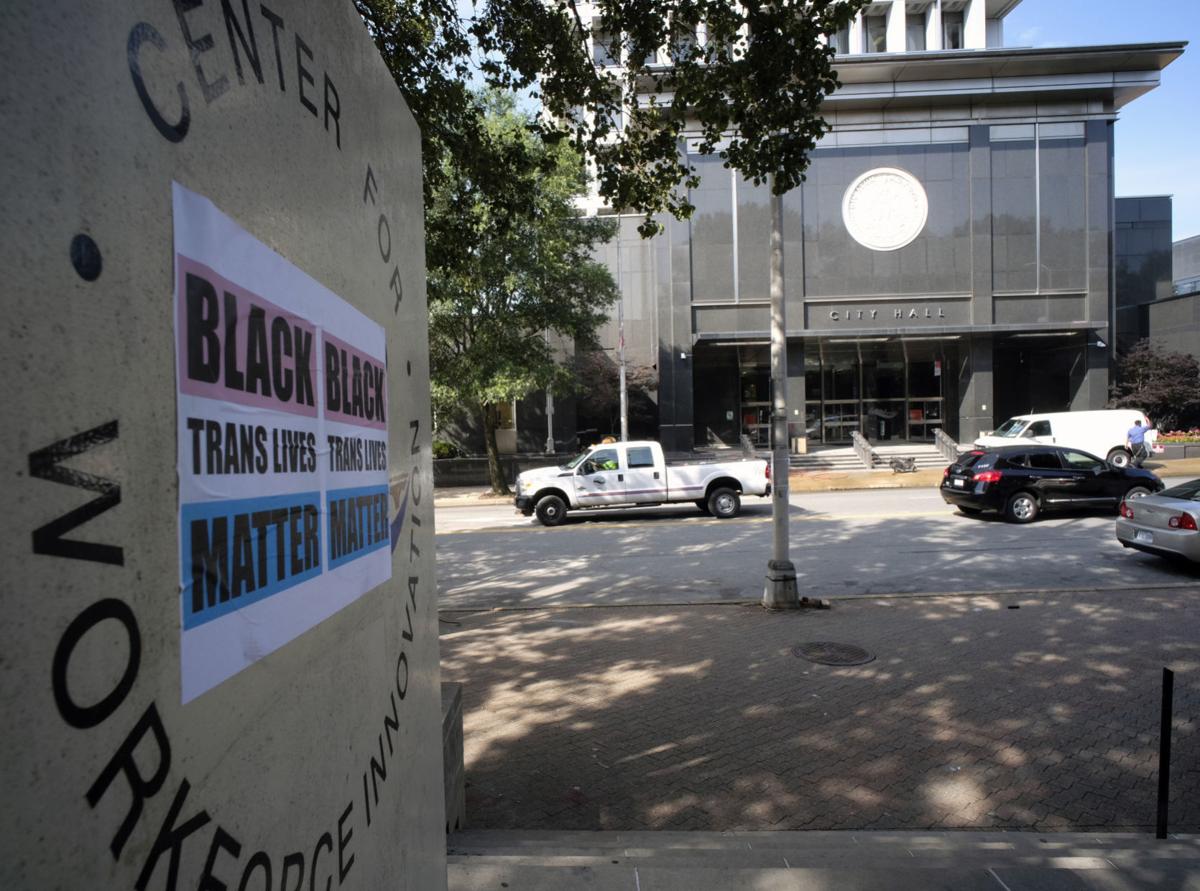 A "Black Trans Lives Matter" poster was stuck to a marker in the empty area across from City Hall in Richmond, VA Tuesday, June 23, 2020 after a crowd was dispersed from the location in the early morning hours.

A Richmond Circuit Court judge dismissed a lawsuit filed by the ACLU of Virginia on behalf of student organizers alleging their constitutional rights were violated last summer when police used chemical irritants, flash bangs and rubber bullets to disperse their sit-in at City Hall.

The suit sought an injunction preventing police — Richmond, Virginia State and Capitol police were all listed as defendants, as well as each department’s respective chief or superintendent — from using what the ACLU called “excessive force” when responding to future demonstrations. An earlier emergency injunction had already been denied.

“People who are harmed by police deserve their day in court, and tragically, our clients were denied the chance to hold police accountable,” said Eden Heilman, legal director for the ACLU of Virginia, in a statement. “We hope the legislature will change Virginia law to make it easier for people to sue police for unconstitutional actions like what they did to these individuals. Too often, police escape accountability for harms caused against Black and Brown people and others protesting against racism.”

But in her ruling, Richmond Circuit Judge Beverly Snukals sided with police saying they “acted reasonably” when declaring an unlawful assembly and in their use of force in this case.

Following the dismissal order, which was signed Jan. 20, activists hoped a legislative remedy would make it easier to sue officers in state court. That measure also failed.

A bill, proposed by Del. Jeff Bourne, D-Richmond, would have allowed police officers to be sued civilly for violating a person’s constitutional rights, a step that supporters say is essential to stopping police from abusing their authority and using unnecessary force, especially against Black people and other minorities. It would have prevented police from using as a defense qualified immunity, which shields a government official from personal liability if their activities are within the scope of their office.

House Bill 2045 was re-tooled after the Senate Judiciary Committee delayed indefinitely passage of an earlier version of the bill during the General Assembly’s special session late last year.

After a hearing on Friday, in which nine members of the public spoke in favor of the bill — including a representative from the ACLU and Kalia Harris, co-executive director of Virginia Student Power Network, one the plaintiffs of the lawsuit — and 11 in opposition, the House subcommittee on Courts of Justice voted to table the issue and to send it to the crime commission for study, effectively killing it for this session.

A narrower Senate version of the bill, proposed by Sen. Scott A. Surovell, D-Fairfax, was also passed over.

If enacted, the bill would not have likely changed Snukals’ opinion, according to Heilman, but she said “ it would have given our clients another option for a claim they could assert in state court against individual officers who injured them.”

But Snukals cited the sovereign immunity that protects State and Capitol Police as she dismissed the claims against those agencies. Sovereign immunity, which differs from qualified immunity, protects the state or its agencies from being sued.

Harris told the legislators about the night on June 22, when her organization led an overnight “teach-in” at City Hall. Six hours into the demonstration, which was attended by about 100 people, police declared the event an unlawful assembly and deployed less-than-lethal munitions to disperse the crowd. Twelve people were arrested.

“That night is still on replay in my head,” Harris said during the subcommittee hearing Friday. “Words can’t explain the feeling of trauma we experienced that night. Yet when we took our case to court, the court failed to hold police accountable. We were denied justice ... At the very least, we should be able to have our day in court.”

In a statement about the lawsuit’s dismissal, the ACLU called the police actions “an unnecessary move that heightened tensions” and an “unprovoked use of force” in which several people were injured.

Richmond police said protesters threw rocks and other things at them and that an officer was injured when struck with a hickory stick.

Despite stating that the plaintiffs lacked standing for the suit, Snukals examined the merits of their argument and ruled against them in each of the five counts. Snukals said protesters failed to disperse after lawfully being told to do so, “armed themselves with defensive protection, such as umbrellas” and launched police’s crowd control weapons back at them.

“While the individual plaintiffs may not have participated in such acts, the totality of the circumstances shows that Defendants’ use of non-lethal forms of force was taken to protect themselves and others from serious injuries,” Snukals said in her ruling.

Heilman said rather than seeking monetary damages based on what had already happened, they were attempting to prevent police from responding similarly during future demonstrations.

“This incident followed weeks of violent force deployed at the hands of the Richmond Police and Virginia State police against individuals exercising their constitutional rights to speak out against police brutality,” the ACLU statement read.

“We wanted to change the behavior of police and how they respond to these events in the future,” Heilman said. “It’s not just to repair the past harm, but to prevent future harm.”

But Snukals said a prohibition on police response would be “speculative” and thus improper.

Since the incident in June, clashes between protests and police have continued sporadically, though the crowd dispersal methods at issue here have been rare.

This story has been updated to correct the title of Kalia Harris, co-executive director of Virginia Student Power Network.

Henrico County police announced Friday that a woman who is accused in a fatal hit-and-run is now charged with involuntary manslaughter.

A Richmond woman charged with defrauding the government out of $823,734 in benefits intended for the care of residents at the assisted living …

Protesters gathered outside City Hall in downtown Richmond in June to demonstrate against police brutality and racial injustice.

A "Black Trans Lives Matter" poster was stuck to a marker in the empty area across from City Hall in Richmond, VA Tuesday, June 23, 2020 after a crowd was dispersed from the location in the early morning hours.