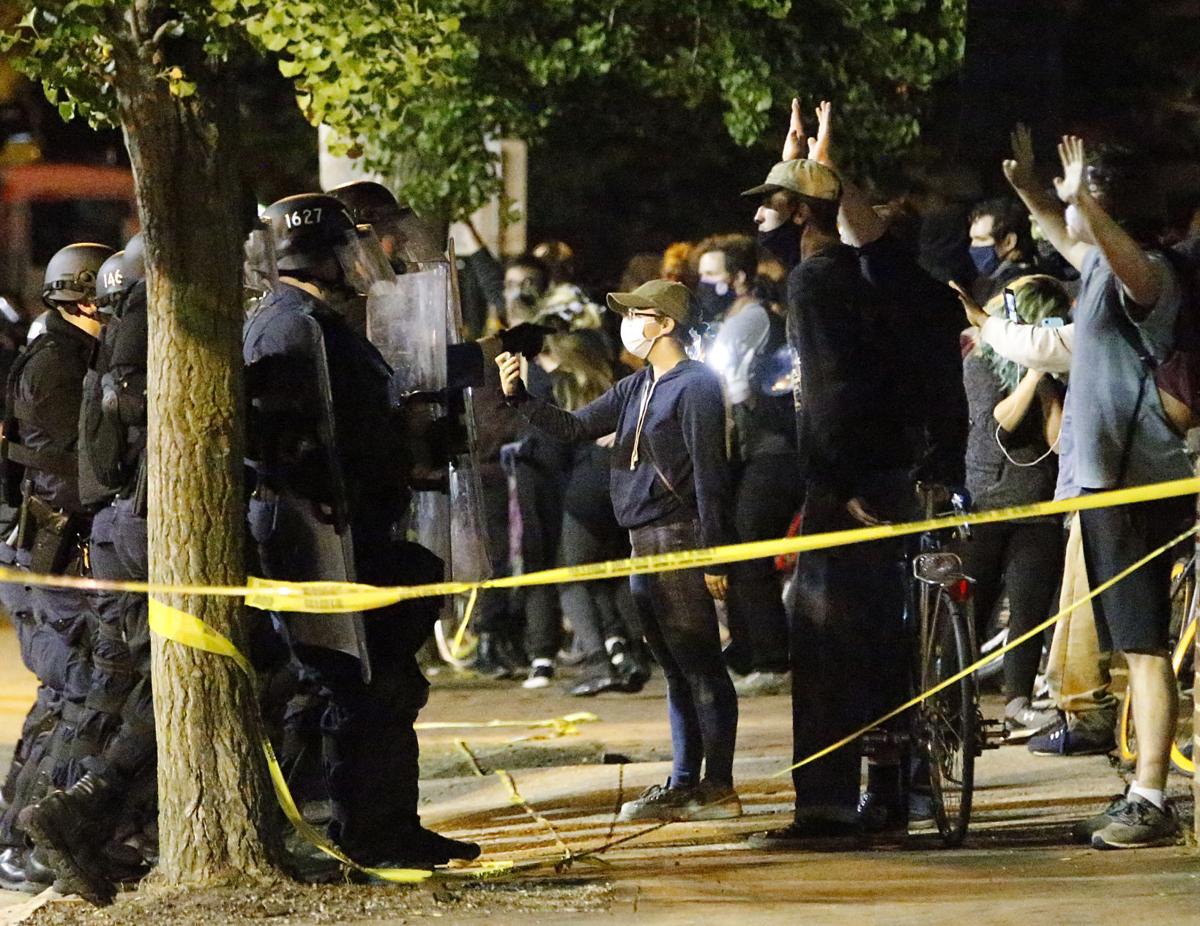 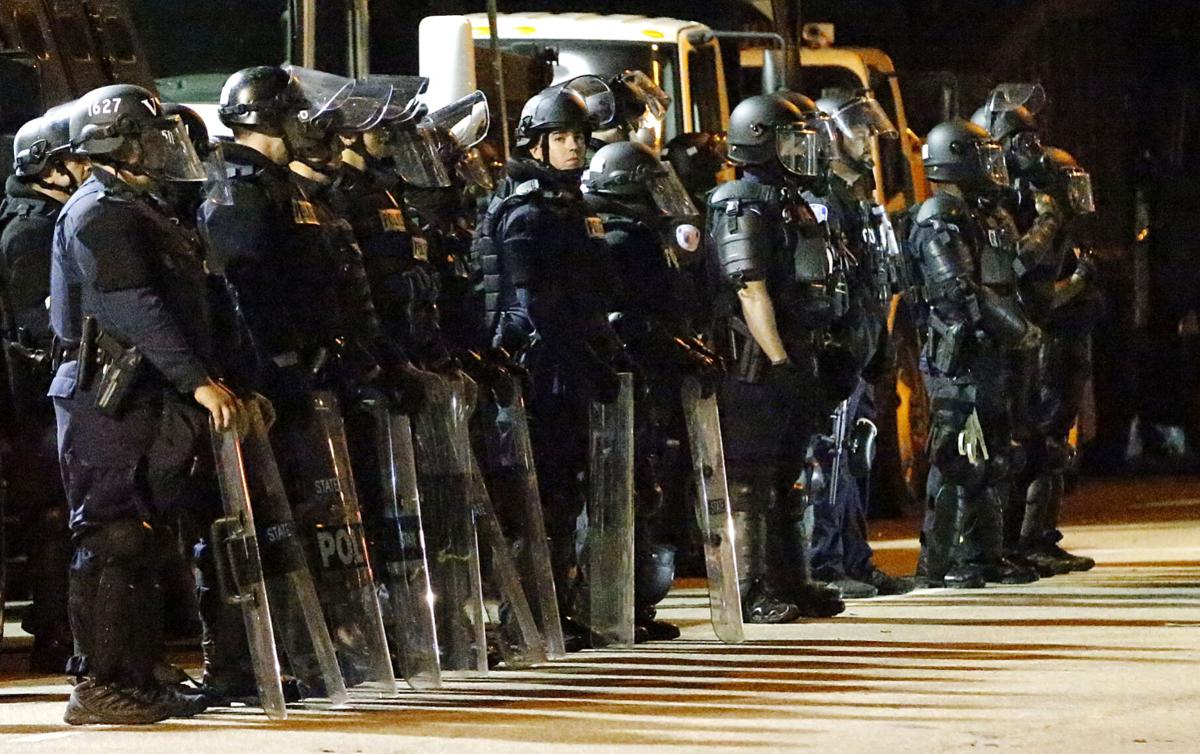 Law enforcement officers in riot gear lined up outside the Richmond Police Headquarters on West Grace Street as protesters gathered on the night of June 15. 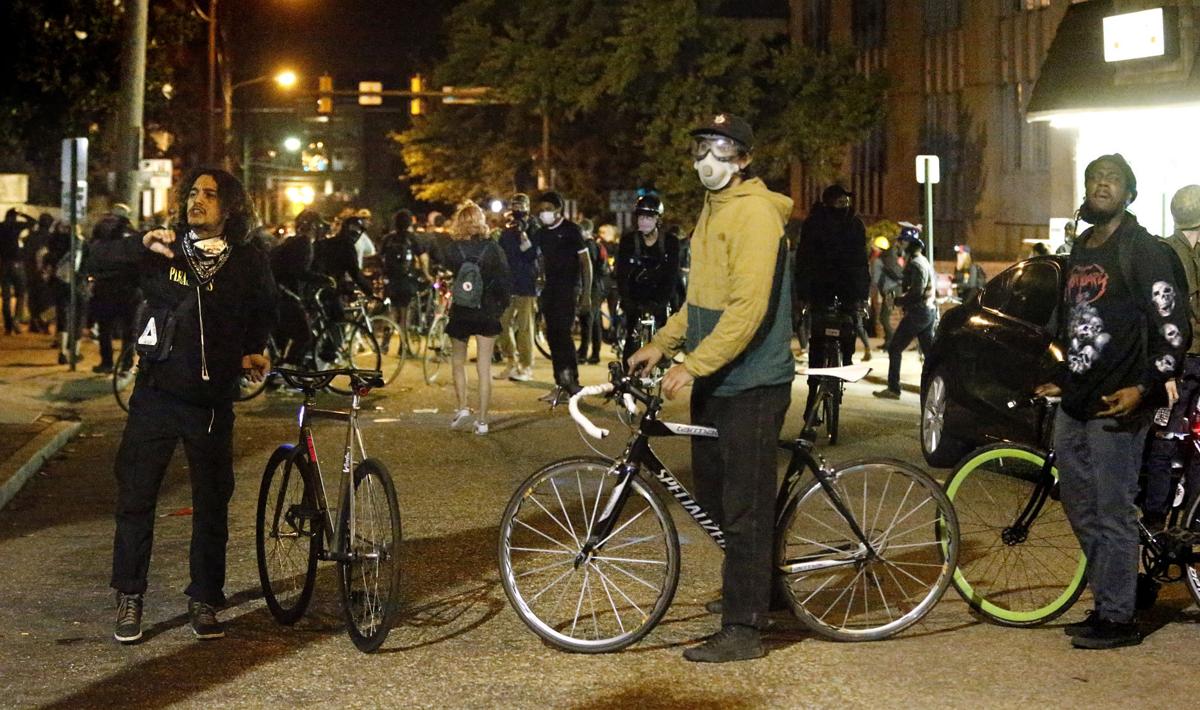 Protesters yell at law enforcement officers after tear gas was dispersed where they gathered in front of the Richmond Police Headquarters on West Grace Street Monday night, June 15, 2020.

A Richmond woman who was hit in the neck with a rubber bullet is seeking millions of dollars in damages, alleging excessive use of force and rights violations by state and city police during recent protests.

Geoffrey R. McDonald, one of Mauer’s lawyers, said Tuesday that he could not comment on the suit, but he identified his client as a 25-year-old Richmond resident formerly of Northern Virginia.

The lawsuit is at least the third one to be filed in response to force used by police in Richmond during protests.

In June, the ACLU of Virginia filed a lawsuit against the city, its police department and Virginia State Police, alleging the agencies’ use of tear gas and other force violated organizers’ constitutional rights to free speech, assembly and protest.

And a lawyer, Jonathan Arthur, filed suit against Richmond police officers over tear-gassing, seeking $50,000 for violating his First Amendment and Fourth Amendment rights, as well as excessive force, assault and battery.

Mauer is seeking $1 million in compensatory damages and $1 million in punitive damages from each defendant, and has asked for a jury trial.

The 17-page complaint alleges violations of the constitutional rights to free speech and assembly; excessive use of force; assault and battery; and supervisory liability on the part of Williams, the Richmond chief of police until June 16; Blackwell, the interim chief from June 16 to June 26; and Settle, who was the state police superintendent then and is now.

The suit stems from an incident on the night of June 15 outside Richmond Police Headquarters and another incident on June 21 on Monument Avenue.

On both nights, Mauer alleges, “suddenly, and without warning or reasonable provocation, members of the Richmond Police Department and Virginia Department of State Police deployed chemical agents, projectiles, and stun grenades, causing injury to plaintiff.”

“Mayor Levar Stoney ... issued several apologies via social media, press statements, and a town hall event, apologizing for these instances of unjustifiable force, and admitting that ‘we violated your rights,’” the suit says.

The suit also references an incident on June 13 when a marked Richmond police SUV was driven through protesters blocking its way. The city’s top prosecutor has cleared the city officer of any criminal wrongdoing in that incident.

On June 14, chemical agents and other force was again used on protesters, prompting some city council members to publicly criticize the police actions, the lawsuit says.

The next day Smith defended the tactics, saying officers had shown “great restraint” as protesters threw rocks and other objects at them.

The suit alleges that later that night, June 15, Mauer was among hundreds of protesters who gathered at police headquarters to protest the “disturbing trend in police misconduct.”

Police established a “do not cross” line marked by cones and yellow tape. According to the lawsuit, one person who was not near Mauer knocked over one of the cones at about 10:15 p.m.

“In response, members of the VSP and RPD apprehended that individual and immediately deployed chemical agents on individuals in his vicinity,” alleges the suit. A person near Mauer was said to have been struck with a riot shield.

Up until that point, alleges Mauer, the protest had not been violent, destructive or threatening. Then, without warning, she alleges, police “began deploying projectiles, chemical agents, and stun grenades — indiscriminately and in large numbers — on the entirety of the protesting crowd.”

Mauer said she was struck in the neck by a projectile she said was a rubber bullet fired at close range toward the upper part of her body — circumstances under which such a projectile could cause life-threatening injuries.

Mauer said she was injured by the bullet, causing pain and distress, and she and other protesters were caused to abandon their exercise of free speech and assembly.

The following day, Mayor Stoney announced that he had forced Smith’s resignation and appointed Blackwell as his interim replacement.

“I believe that the use of tear gas, rubber bullets and nonlethal recourse should be the last resort,” Stoney said after he was asked about their deployment over the previous two nights during a press conference where he announced the change at the top of the department. “When I hear last resort, that means that violence of some sort has occurred, and I think that’s what happened at some of the protests at RPD.”

Later in the news conference, Stoney defended the actions by saying: “I think we’ve done everything possible that we could have done to ensure that this city has stayed safe.”

Then on June 21, according to Mauer’s suit, hundreds of protesters — Mauer among them — marched on the Lee and Stuart statues on Monument Avenue and again, without warning, police used chemical agents, stun grenades and projectiles against the crowd.

Richmond police again defended the use of crowd dispersal measures, saying they had declared an unlawful assembly “as protesters threw objects at the officers and tied a rope to the (J.E.B. Stuart) statue in an apparent attempt to pull it down — an action that would have put many people at risk of being hit,” police said in a statement the next day. Police and protesters were in a standoff between the two monuments for more than four hours on that Sunday night into early Monday morning. Six people were arrested.

Mauer’s suit alleges that on June 21 she was injured by the chemical agents and the stun grenades and again abandoned her free speech and assembly rights.

Chemical agents such as tear gas and pepper spray are potentially lethal; stun grenades can cause temporary or permanent vision and hearing loss and even dismemberment or death.

The events put police leadership on notice that there was a need to train and direct officers on how and when to appropriately interact with protesters, according to Mauer.

“Despite this obvious need, and multiple censures and apologies from top city officials — including defendant Smith — defendants Settle, Smith and Blackwell, undertook no substantial steps in training, disciplining, or redirecting the officers of their respective forces,” alleges the suit.

Father indicted in connection with death of his toddler daughter

A Richmond father has been indicted for first-degree murder and rape in connection with the 2019 death of his daughter.

RPD chief forms community advisory committee, but is not publicly identifying most of its members

A tip from a resident led to the arrest of a Richmond man accused of stealing a running car with a baby in the back seat early Monday morning,…

The driver in a fatal crash in Chesterfield County on Oct. 1 has been charged with involuntary manslaughter, county police said Thursday.

Richmond police said Monday that they need the public’s help to identify the person suspected of stealing a vehicle with a baby inside.

A man was killed in a shooting early Friday morning in South Richmond.

Law enforcement officers in riot gear lined up outside the Richmond Police Headquarters on West Grace Street as protesters gathered on the night of June 15.

Protesters yell at law enforcement officers after tear gas was dispersed where they gathered in front of the Richmond Police Headquarters on West Grace Street Monday night, June 15, 2020.