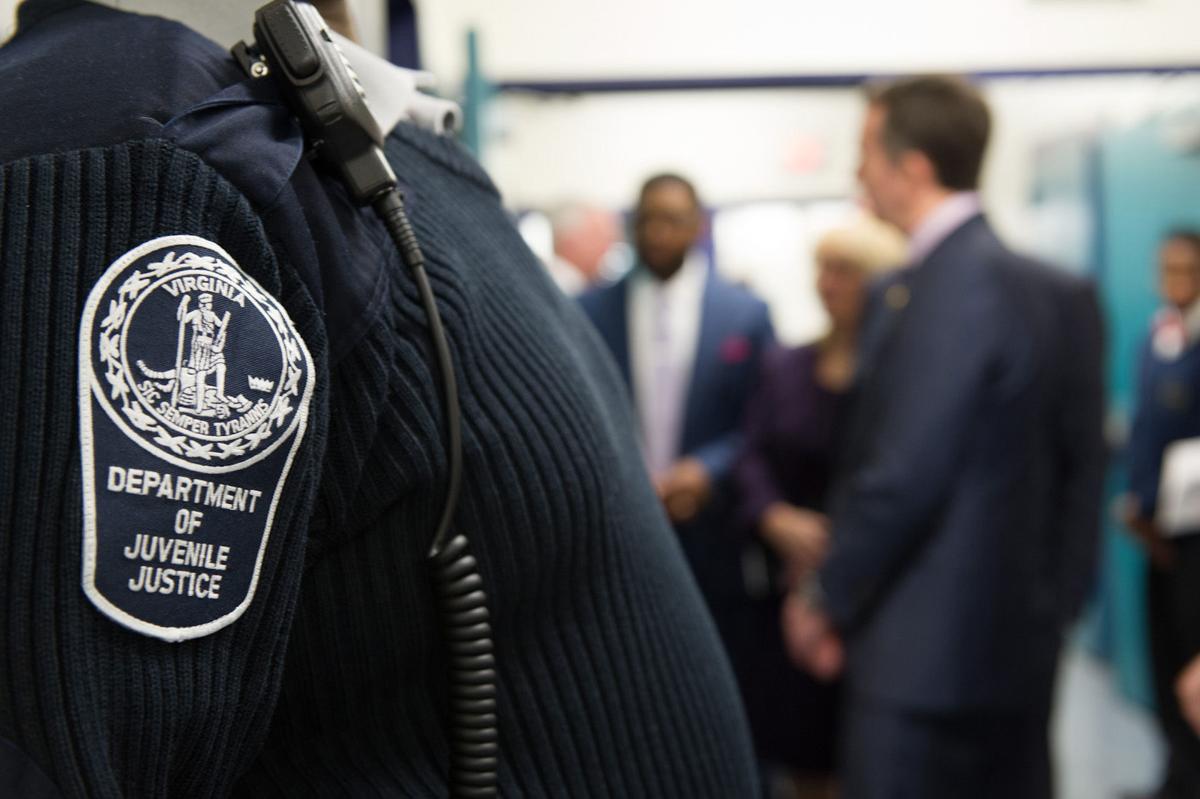 Gov. Ralph Northam made his first visit to the Bon Air Juvenile Correctional Center on Wednesday, 2/7/2018. The governor spent his morning listening to the stories of some of the 200 youth who are the last remaining maximum-security prisoners in Virginia's juvenile justice system.

Two employees at the Bon Air Juvenile Correctional Center in Chesterfield have the coronavirus, but they had limited contact with the youths and are home for treatment.

Twenty-five residents of the Bon Air Juvenile Correctional Center in Chesterfield County have tested positive for COVID-19, the Department of Juvenile Justice said late Friday, ending more than 48 hours of silence after advocates said there was an outbreak among those held at the facility.

The detention center houses roughly 200 youths of both sexes, ages 14 to 20, incarcerated for crimes as serious as murder. That means an eighth of the population there has or has had the virus.

“Of the 25 Bon Air residents who have tested positive, I’m pleased to report that 21 exhibited no outward symptoms, and only four had symptoms that were no more severe than a cold or flu,” said Dr. Christopher Moon, the Department of Juvenile Justice’s chief physician. “Any resident who tested positive was immediately placed in medical isolation. Thirteen of those residents have already been released from medical isolation per Virginia Department of Health (VDH) guidelines.”

Virginia Department of Health guidelines recommend a two-week quarantine for anyone who has had close contact with someone with COVID-19.

Last week, the Department of Juvenile Justice announced that just one juvenile housed at the facility has tested positive. Earlier, on April 2, the department said two employees at the youth detention center had also tested positive.

In a joint statement issued Wednesday by the Legal Aid Justice Center and RISE for Youth, the statewide legal advocacy groups publicly condemned the Virginia Department of Juvenile Justice’s response to COVID-19 there, calling it inadequate.

“Advocates are now aware of several youth at Bon Air having tested positive for COVID-19, but DJJ has not made publicly available the number of youth or staff with confirmed diagnoses,” the statement said.

“Given the department’s reluctance to implement an aggressive mitigation process and communicate openly and often with youth and families, we knew it was only a matter of time before Bon Air experienced an outbreak,” said Rachael Deane, legal director of the JustChildren Program at the Legal Aid Justice Center, in the release. “The Department has both a legal and a moral obligation to protect the youth imprisoned at Bon Air, and we call on DJJ to immediately act to stop the spread of this disease.

DJJ Director Valerie Boykin said in Friday’s statement that the department withheld the number of confirmed cases for privacy concerns.

“We had previously declined to release the number of youth who tested positive for COVID-19 to protect the privacy of our underage residents,” Boykin said. “This practice was in line with other youth-serving agencies in the Commonwealth and other juvenile justice agencies across the country. Over the past two weeks, we have begun to see some of these agencies reconsider such policies. As the number of cases has risen, DJJ believes the privacy of individual residents can be protected.”

Since mid-March, the department’s medical staff has been routinely screening all Bon Air inmates by taking temperatures and testing anyone with a temperature of 100.3 degrees or higher, per guidelines from the U.S. Centers for Disease Control and Prevention, according to the statement.

These screenings have been stepped up to twice daily and the threshold for testing based on temperature lowered with the facility’s first positive test result.

“When we received the first positive test for a Bon Air resident, and at the recommendation of the VDH, out of an abundance of caution we also tested residents who had a temperature between 99 and 100,” said Dr. Bridget Wilson, nurse manager. “It was this slightly elevated temperature that led to the vast majority of our tests. We will continue to be aggressive with our testing.”

The statement calls the practice “more vigorous than what the average citizen experiences. They are tested at the slightest hint of symptoms,” it said.

Residents who have tested positive are taken to the Central Infirmary or an alternate medical unit on campus, apart from other residents and staff. These units are equipped with portable industrial HEPA filter air abatement units to reduce the risk of further spread.

“No resident has required emergency or hospital care; however, a resident would be transported if needed,” the department said.

The families of every youth who has tested positive have been notified, according to the statement.

Greg Davy, a department spokesman, said the facility has the capacity to house 272 youth under the its Community Treatment Model. Since mid-March, Bon Air’s population has been reduced around 10% , and is currently below 200. Nearly 80% of those still held there are considered serious offenders.

Liz Ryan, CEO of the Youth First Initiative, on Friday called on the state to release residents from Bon Air because of the COVID-19 risk. The initiative is a national campaign to end youth incarceration.

“For over a month, youth justice advocates have urged Governor Ralph Northam, [Public Safety and Homeland Security] Secretary Brian Moran and the Department of Juvenile Justice (DJJ) to protect youth in their facilities from the inevitable spread of COVID-19. Unfortunately, those sworn to protect our vulnerable youth have failed and now 25 young people have tested positive for this highly contagious virus,” Ryan said in a statement. “Gov. Northam must immediately and safely release incarcerated youth from Bon Air and other DJJ contracted facilities, including creating transition plans.”

UPDATE: Legal advocates say there is COVID-19 outbreak among youth at detention center in Chesterfield

Gov. Ralph Northam made his first visit to the Bon Air Juvenile Correctional Center on Wednesday, 2/7/2018. The governor spent his morning listening to the stories of some of the 200 youth who are the last remaining maximum-security prisoners in Virginia's juvenile justice system.

Two employees at the Bon Air Juvenile Correctional Center in Chesterfield have the coronavirus, but they had limited contact with the youths and are home for treatment.