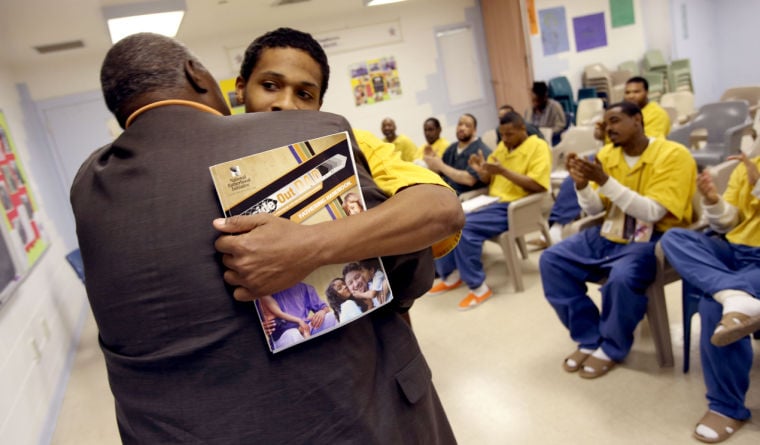 Dennis Fries (left) an instructor for the InsideOut Dad program, gets a hug from William Jones, a participant in the class who wants better relationships with his four children. 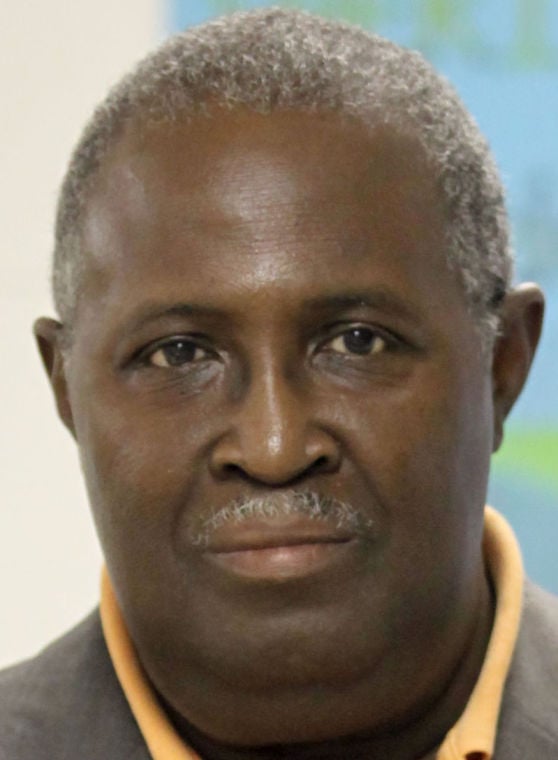 Ronnell Glasgow, 26, said he grew up without his father in his life and was repeating that pattern with his own children, daughters ages 7 and 9.

Glasgow is behind bars at the Richmond City Jail, but even when he was out he said he thought giving them material things was enough.

Just weeks into a fatherhood skills training program at the jail, Glasgow said he had reached out to his own emotionally distant father and was communicating more with his daughters, who he said are no longer shy around him.

“I understand the importance of not having a father,” Glasgow said, adding that with his own father he was “building a relationship as a father and a man.”

Glasgow and about a dozen other men incarcerated in the Richmond City Jail “graduated” Tuesday from InsideOut Dad, a three-month program teaching them be better fathers in preparation for when they are released.

“Nobody else can take this from you,” said Dennis Fries, who facilitated the program for First Things First of Greater Richmond. Fries is with AmeriCorps, a federal agency that enlists volunteers and paid employees to work in local communities.

The InsideOut Dad curriculum was created by the National Fatherhood Initiative, an organization that maintains “widespread fatherlessness is the most socially consequential problem of our time.” Studies link father absence to juvenile crime, teen pregnancy and child poverty.

The men in the jail program voluntarily attended weekly sessions on topics such as self-awareness, child development, discipline, spirituality, handling emotions, being a man and relationships with their children’s mothers.

“We went into some deep and dark subjects,” Fries said, thanking the men for sharing their stories with him and each other.

“The goal is to get everybody to communicate with their kids, to relearn some parenting skills you never knew you had,” Fries said. At the completion ceremony Tuesday, the men shared how the program affected them.

One man described having a 15-minute telephone conversation with his daughter, who he rarely spoke to before. Another described overcoming fear of rejection and reaching out to an adult daughter and his surprise at her welcoming response. Another talked about writing to his 6-year-old son and getting a reply.

“Being there for my kids is better than any gift,” said William Jones, 22, father of four children. He said he is in jail on a probation violation and plans to enter an addiction-treatment program when he is released.

“I never had my dad or nobody tell me they were proud of me” until this program, Jones said.

Inside Out Dad program

Dennis Fries (left) an instructor for the InsideOut Dad program, gets a hug from William Jones, a participant in the class who wants better relationships with his four children.