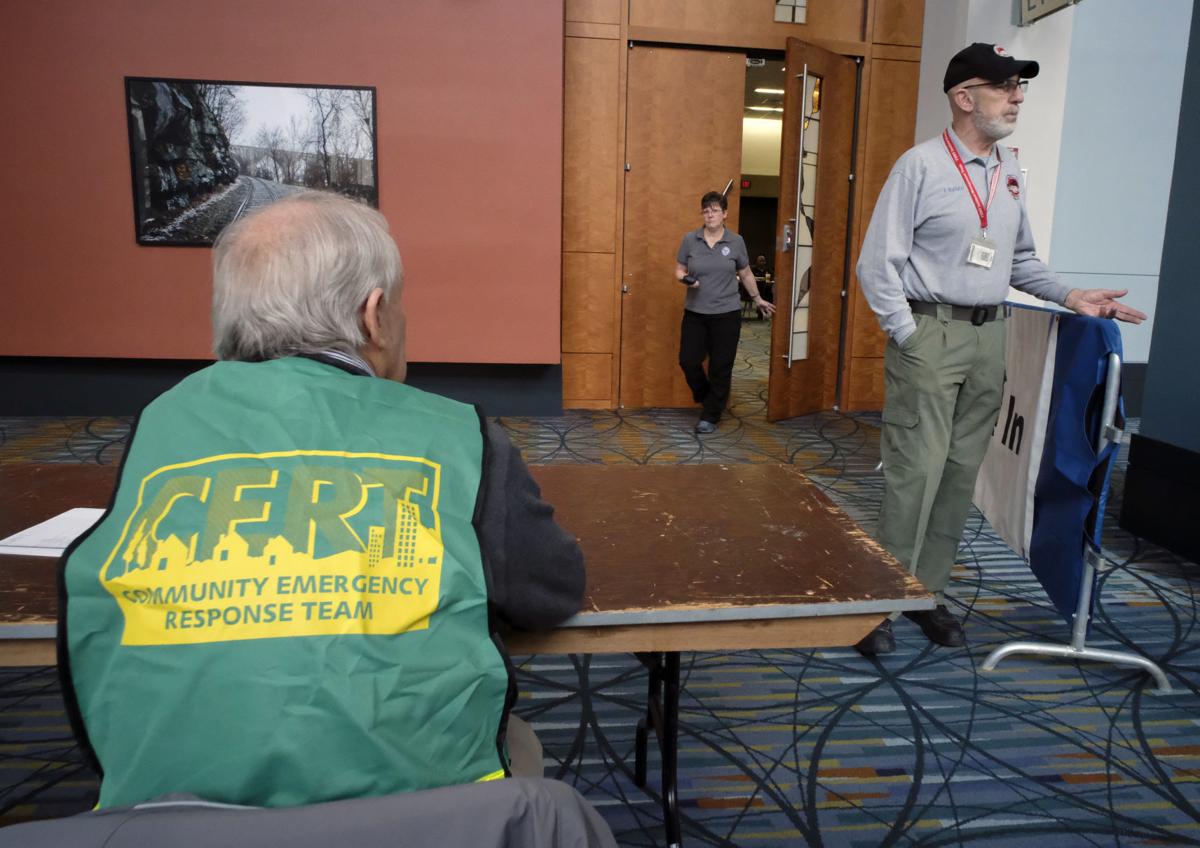 Richmond police Lt. Robert Marland (right) is a member of a task force that has been established to advise agencies and to prepare for the “what-ifs” of the coronavirus. 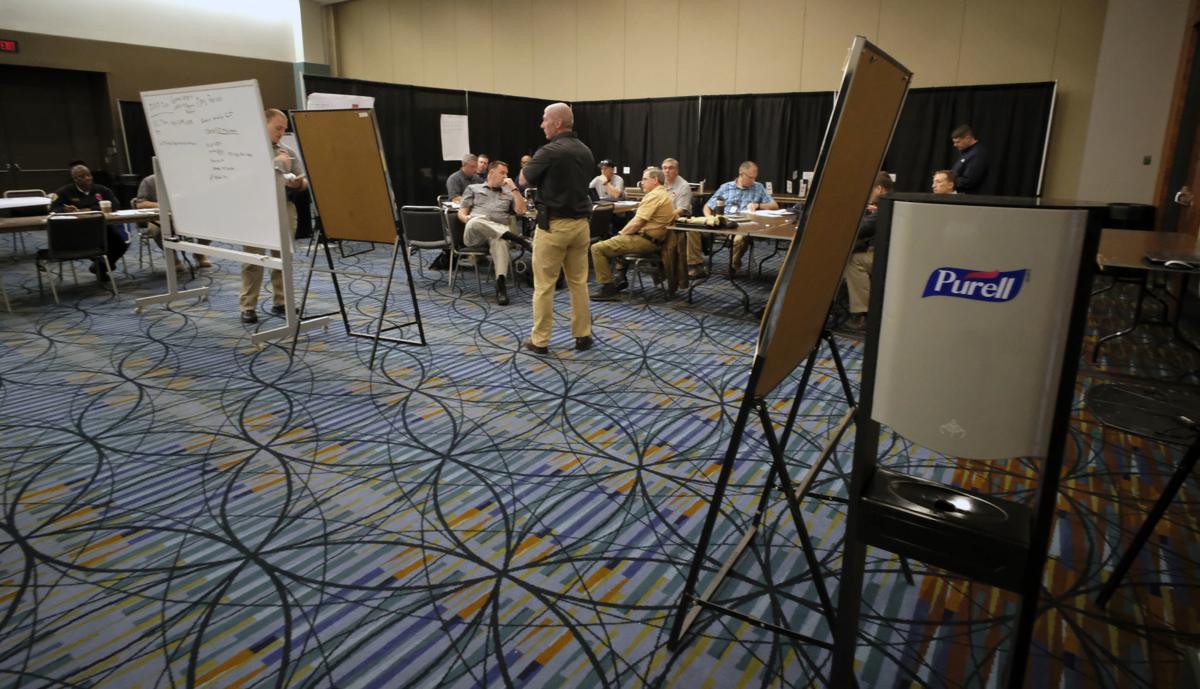 A meeting about the coronavirus outbreak was held inside a task force command center at the Greater Richmond Convention Center on Thursday, March 19, 2020. 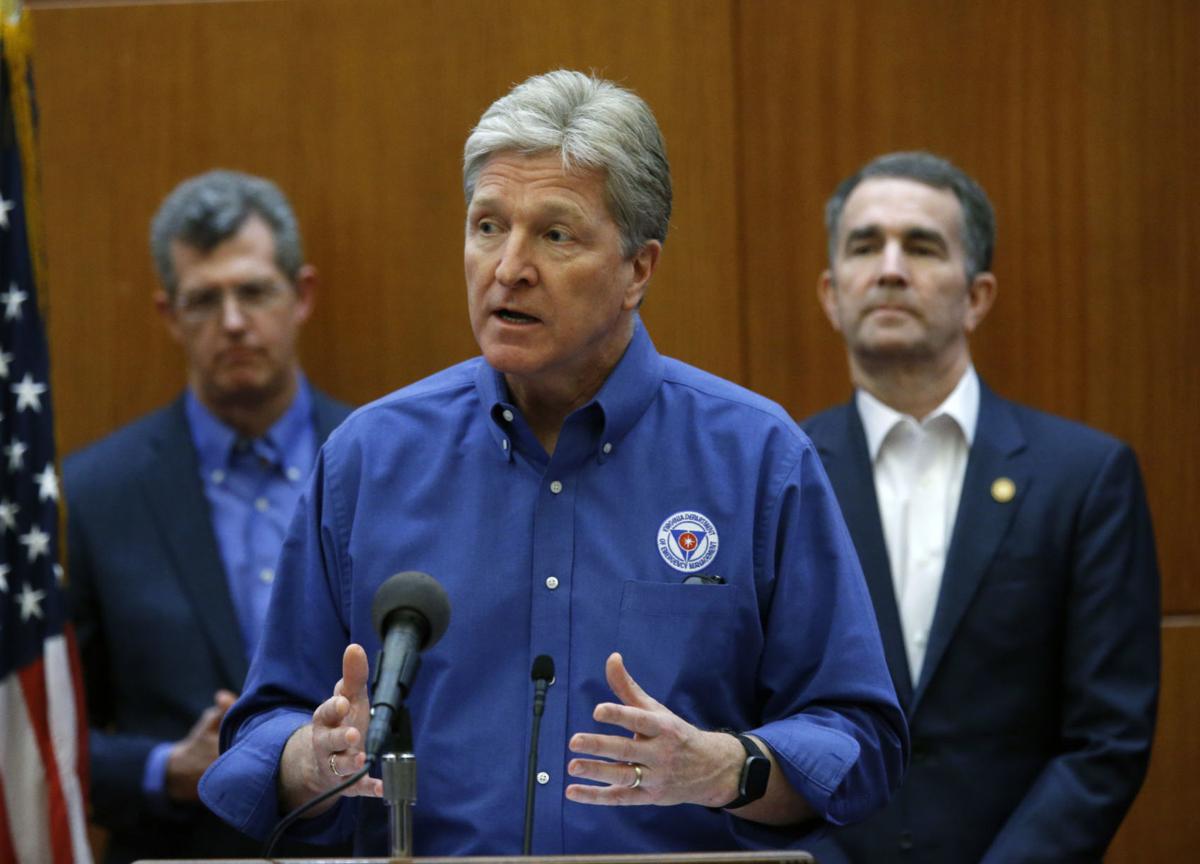 The limit was imposed specifically upon restaurants, fitness centers and theaters. Both Chesterfield and Richmond police said it does not apply to private gatherings.

By Tuesday, when the order was announced, nearly every local restaurant had already suspended dine-in service due to concerns about the spread of the coronavirus.

“Our primary goal is to educate business owners and managers about the order to gain voluntary compliance,” Chesterfield County police spokeswoman Liz Caroon said in an email. “When responding to the first complaint at a given location, officers will identify the owner or manager and educate them about the executive order (including providing a copy of the order). When they respond to multiple complaints at a given location, the officers may issue a summons.”

“We value and appreciate our local business community and the good, upstanding folks who have undertaken great risk and tremendous sacrifice to add value to our Chesterfield County, Virginia community while making an honest and purposeful living,” his post said. “You — and those you gainfully employee — feed and entertain us ... and you make us stronger and more healthy; for this, we are grateful.”

Richmond police said they want to first get the word out and ask for cooperation before citing any business owner, adding that there had been little guidance from state officials.

Violation of the order would be treated as the equivalent of a traffic ticket, according to Richmond police spokesman Gene Lepley. A class 1 misdemeanor is subject to punishment of up to 12 months in jail and/or a fine of no more than $2,500, according to the state code.

Representatives from the Richmond police, fire and ambulance agencies, along with their colleagues in Henrico, Chesterfield and Hanover counties, are meeting under one roof to coordinate efforts and to support the Virginia Department of Health.

The Central Virginia All Hazards Incident Management Team has established a task force command center at the Greater Richmond Convention Center to advise agencies and to prepare for the “what-ifs” of the coronavirus.

“It is a wide group of individuals,” said Richmond police Lt. Robert Marland. “We do this separate from our regular jobs.”

When the VDH offered a drive-thru testing center in eastern Henrico on Wednesday, the Henrico police were there for traffic control, and the Henrico Sheriff’s Office maintained security.

Another pop-up testing site will be offered Friday, though the location was not announced Thursday morning, and the task force is preparing for the next round of testing. The command center helps its organizations determine the manpower they need, how to respond to calls, how officers need to protect themselves and how to deal with the public.

The command center also gives police and first responders the chance to talk about what’s next — how the coronavirus will affect the community in the future and what challenges it will present.

“Everybody’s planning,” Marland said. “All constituents are planning for events or possibilities. You’ve got to. You can’t just sit back and not do it.”

Despite the threat of the virus and recommendations to stay home, crime continues and police continue to respond.

Chesterfield police reported a slight uptick, 6.6%, in calls for service over the past week, compared with the same time last year. The number of offenses has gone down slightly, 4.6%.

Of the 3,302 calls for service received March 10 to 18 in Chesterfield, only 10 made mention of COVID-19 or related terms, according to Caroon, the police spokeswoman.

Chesterfield police said the increase in calls and decrease in offenses appear to be related to measures taken to respond to the virus and more people being at home rather than work or school. The types of calls they’ve seen increase, like “suspicious” persons or activities, are similar to those they usually see increase during summer when school is out, the department said.

Richmond and Henrico police did not respond to requests for crime statistics on Thursday. There have been four fatal shootings in the city since Sunday.

Public Safety Secretary Brian Moran said Thursday that state officials are going to try to keep jail populations from rising by asking law enforcement to issue summonses instead of making arrests when possible, and reconsidering some jail sentences for low-level offenses.

This directive comes after the ACLU of Virginia and others called on the state and city this week to release some inmates out of concern for their well-being amid the pandemic.

“Lest there be any doubt, crime doesn’t self-quarantine,” said Zachary Terwilliger, U.S. attorney for the Eastern District of Virginia. “And our brave law enforcement partners will not allow the rule of law to disintegrate amidst this pandemic.”

The number of confirmed coronavirus cases in Virginia has climbed to nearly 100, a statistic that was nearly a day old by the time state offic…

Richmond police Lt. Robert Marland (right) is a member of a task force that has been established to advise agencies and to prepare for the “what-ifs” of the coronavirus.

A meeting about the coronavirus outbreak was held inside a task force command center at the Greater Richmond Convention Center on Thursday, March 19, 2020.