WATCH NOW: In frustration, new interim police chief says Richmond needs to 'take our community back'
0 Comments
Share this
1 of 6 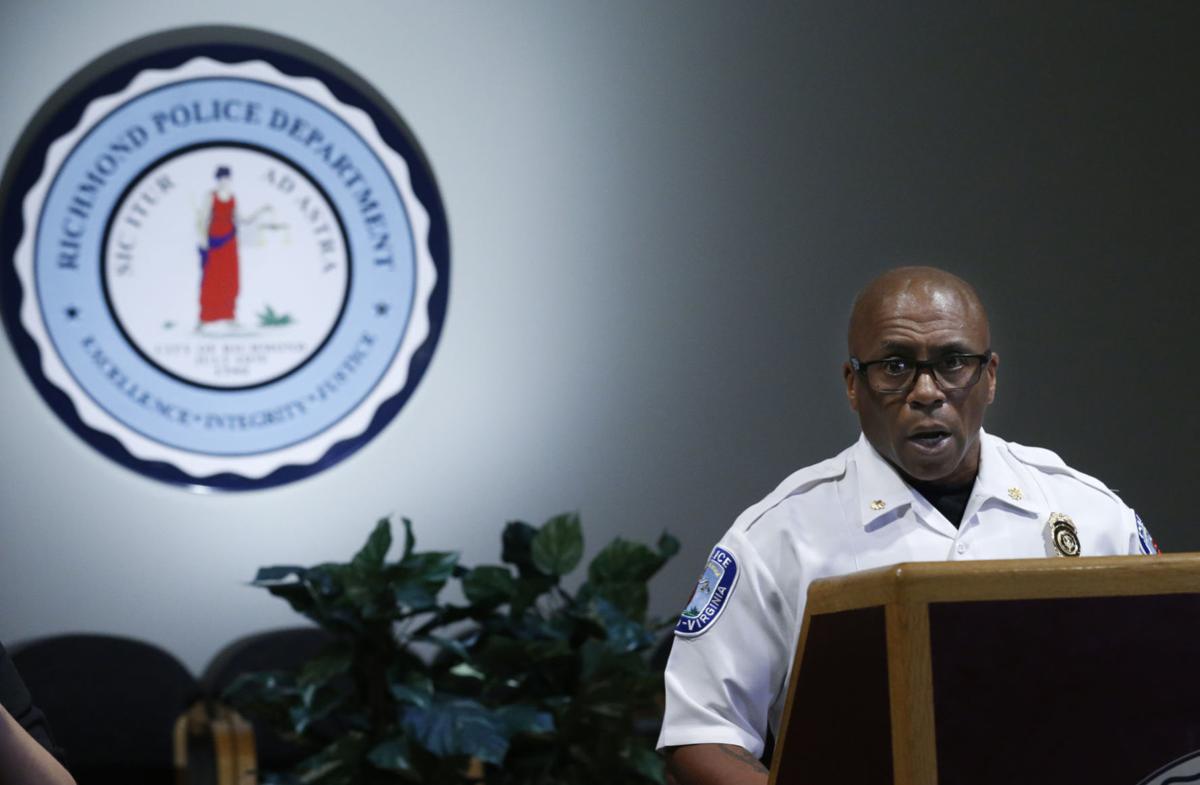 William “Jody” Blackwell will remain in command until July 1, then will return to his previous role in the department. 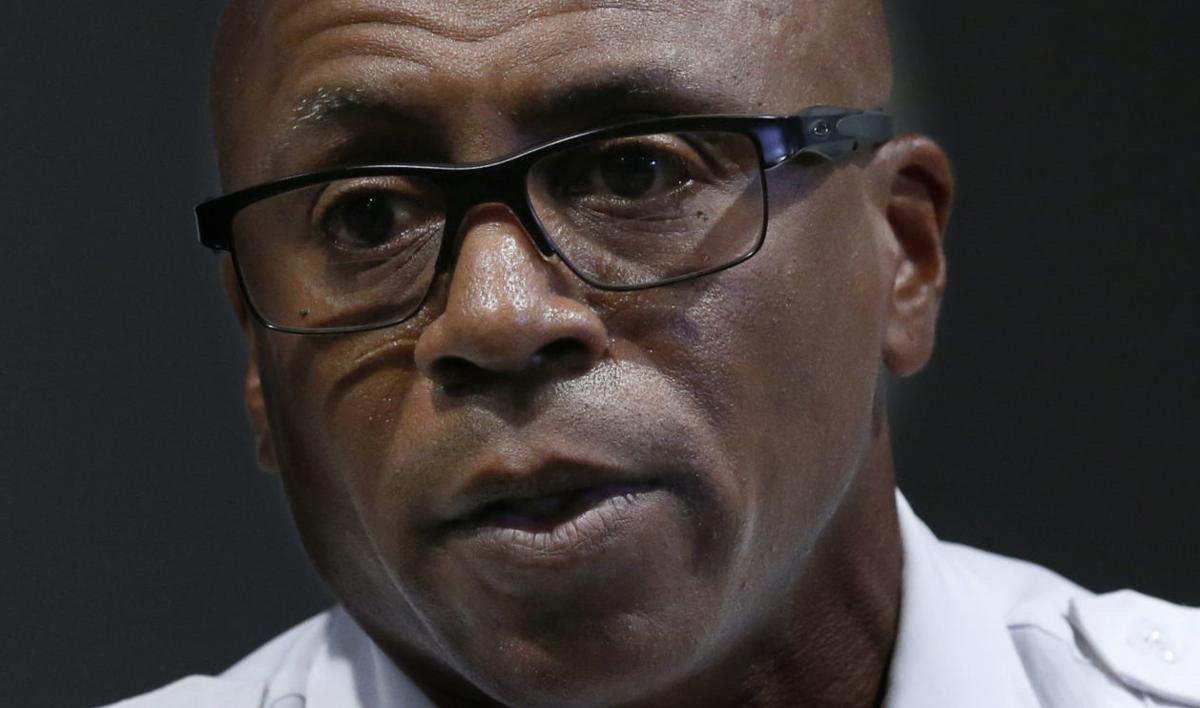 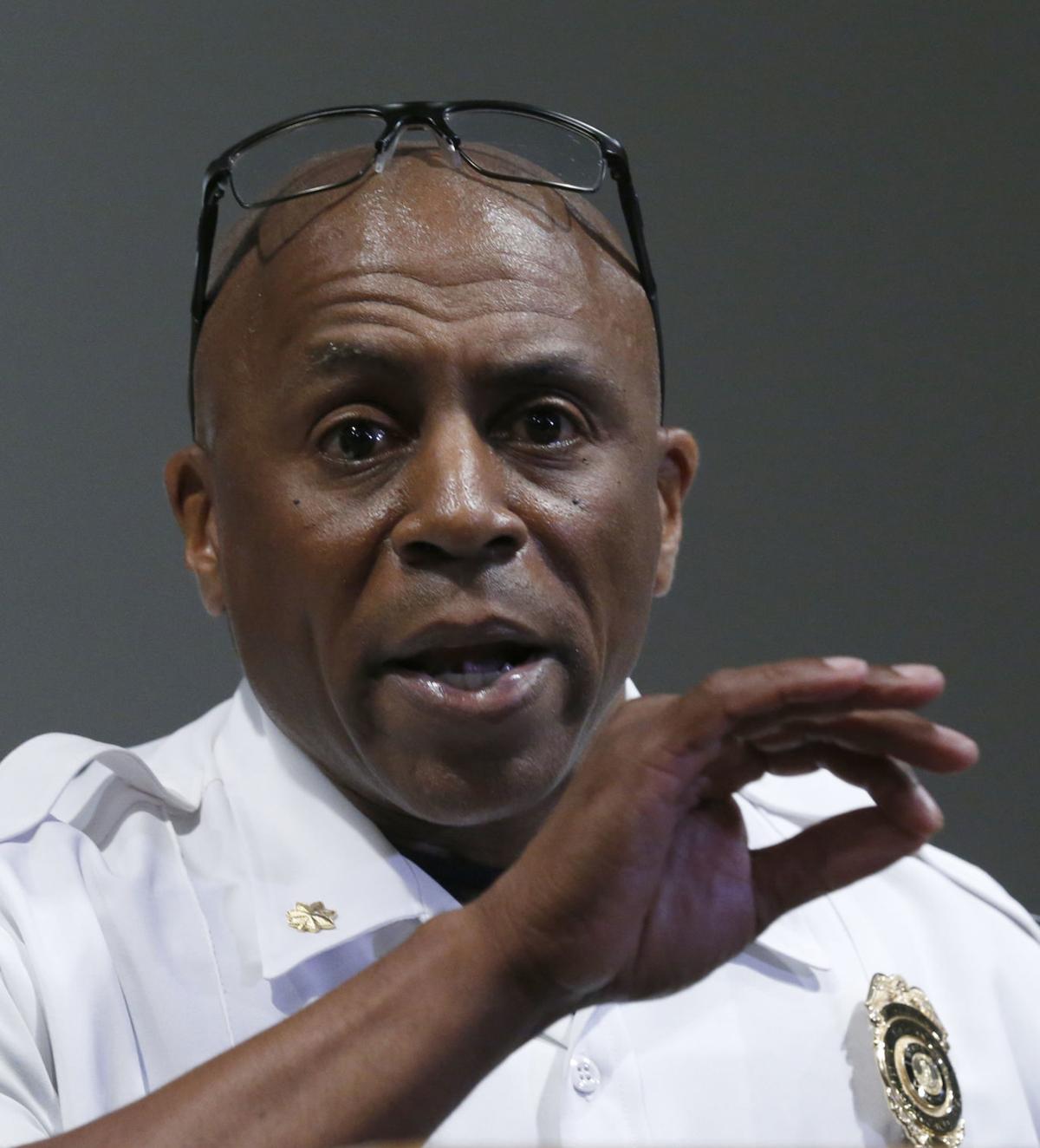 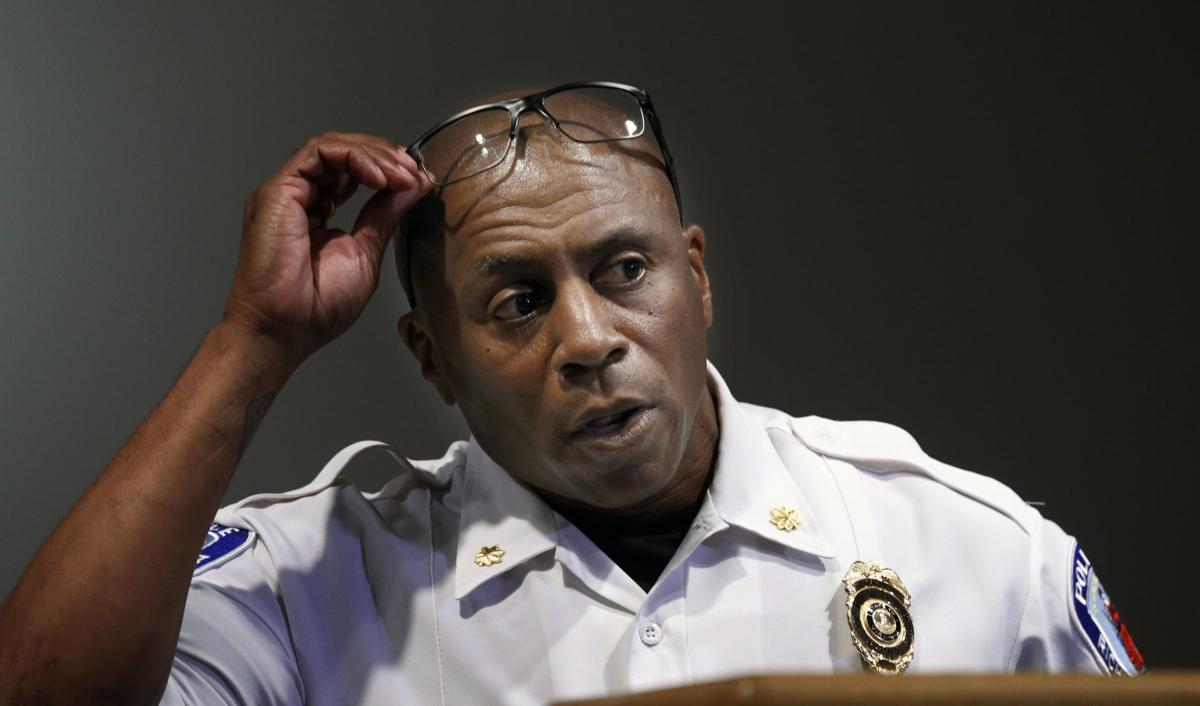 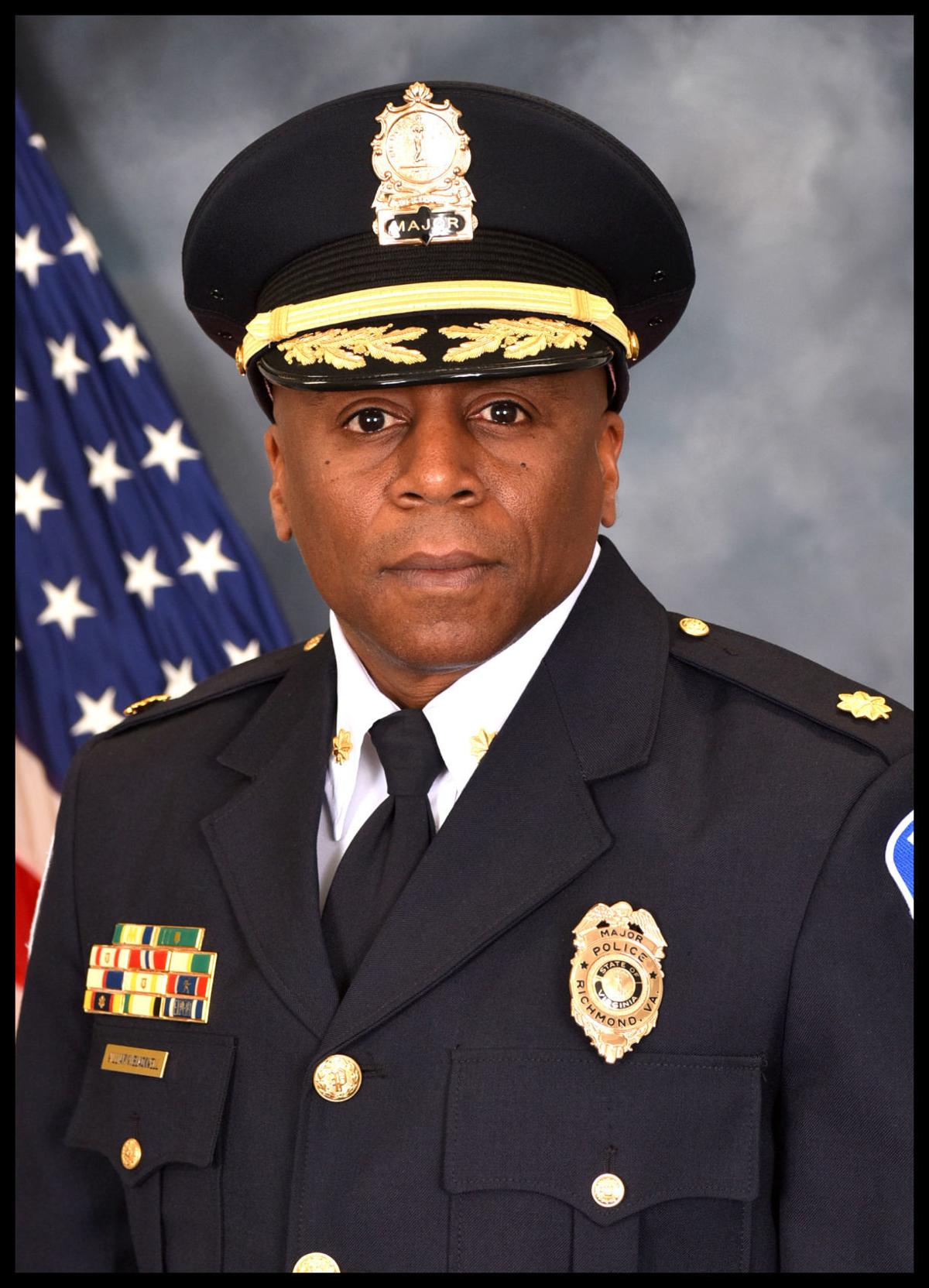 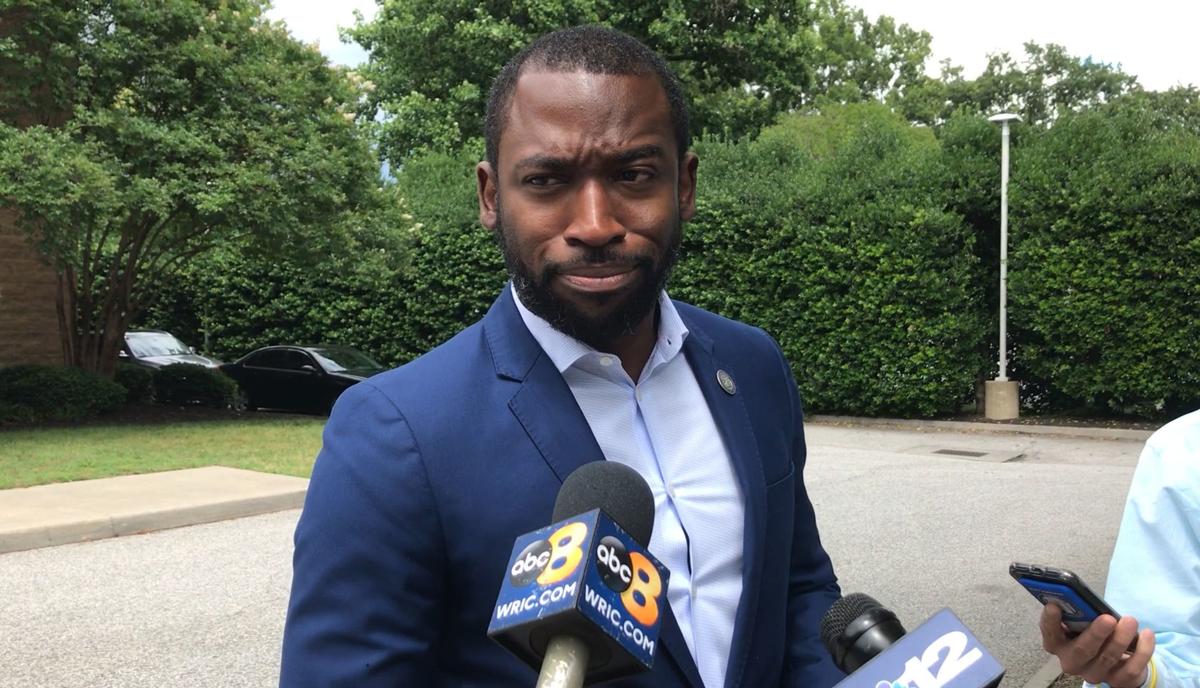 Richmond Mayor Levar Stoney was asked by the media Thursday if he planned to resign. He said no.

Richmond’s new interim police chief on Thursday vowed to “get the city back” after weeks of civil unrest stemming from protests of police brutality.

“We, as a community, need to step up and take our community back because too many sit in silence,” the interim chief, Maj. William V. “Jody” Blackwell, told reporters on Thursday. “I hear fear, I’m afraid. However, my love for this city and my love for these men and women will not cause me a challenge as far as reacting. We’re going to get the city back.”

Less than 48 hours after taking the helm of the department, Blackwell expressed his frustration with the position in which the protests have placed his officers: “It frustrates me to no end. I have some of the greatest men and women employed by the Richmond Police Department and they stand judged by people who refuse to even sit down and talk to us civilly.”

“We didn’t ask for any of this, including me being here,” Blackwell said in response to a question about morale. “But we’re going to make do with what we’ve got and we’re going to continue to push forward.”

Blackwell is a 22-year veteran of the department who fatally shot a man 18 years ago. He most recently held the position of chief of staff and said he was proud to work alongside the men and women of the RPD. “I am committed to the members of the Richmond Police Department to remain who I am and to lead by example,” he said.

His comments came two days after Mayor Levar Stoney announced that Chief William Smith had resigned at the mayor’s request. The mayor had been scheduled to introduce Blackwell to the community at Thursday’s news conference at the RPD Training Academy. But a police spokesman said Stoney would not be doing so because he was meeting with several police officers.

In the lobby of the academy, a group of officers waited to meet with Stoney, wearing shirts that said “I stand with 2140,” referring to Smith’s badge number.

“In the city, we are faced with some trying times, including the civil unrest at a level that many of us have not seen before” coupled with the health challenges of a pandemic, Blackwell said. “I recognize the challenges that we as a community have to face.”

“The strength of our city is truly being tested,” he said, adding that as a society “we need to improve race relations, combat discrimination and racism.”

“As law enforcement professionals, it is our responsibility to ensure we treat all citizens fairly and equally in all of our dealings,” he said. “I am committed to maintain our high levels of accountability both within and outside of our department.”

After speaking for about five minutes, dodging one question, and giving a passionate defense of his department, Blackwell left the news conference to cheers from the onlooking officers.

Afterward, Stoney met with the dozens of officers. The meeting, which the media wasn’t allowed to attend, lasted about 90 minutes.

“They were able to express to me their exhaustion, their frustrations, as well,” Stoney said. “They wanted to express that to me, what they’re going through. I heard them. I understand exactly where they’re coming from. ... But they support Chief Blackwell and his leadership and they understand that we’re going to get through this and we’re going have a safe city, without a doubt.”

When asked if he’d be resigning, Stoney grinned and said: “No.”

Stoney’s announcement on Tuesday that Blackwell was replacing Smith came amid what appeared to be escalating clashes between protesters and police.

The naming of a new chief this week also followed an incident in which a Richmond officer drove an SUV through protesters blocking the vehicle’s path Saturday night at the Robert E. Lee statue, and came two weeks after Richmond police dispensed tear gas into a crowd of protesters at the Lee monument without warning, more than 20 minutes before mandatory curfew.

Stoney said earlier this week that using “tear gas, rubber bullets and nonlethal recourse should be the last resort.” On Thursday, he denied actively directing the department’s responses or actions, and defended the department after hearing from its rank-and-file.

“We’ve asked a lot of the Richmond Police Department recently,” Stoney said, adding that two officers have been shot in recent weeks. “They’ve been hit with bricks, they’ve been hit with cinder blocks, and stones, and urine and other caustic material.”

Blackwell brushed off a question from a Richmond Times-Dispatch reporter about his fatal shooting of a man in 2002.

“It’s a completely different situation,” Blackwell said in declining to discuss the case. “That’s not what we’re here for today.”

A Richmond grand jury heard evidence in that case and did not return an indictment against Blackwell.

According to police at the time, Jeramy O. Gilliam pointed a gun at Blackwell, who swept Gilliam’s arm to the side and then grappled with him. While they wrestled, Blackwell — fearing for his life — fired his own gun into Gilliam’s back, police officials contended.

The encounter unfolded after police responded for a report of a burglary and Blackwell saw Gilliam walking in the 2300 block of Idlewood Avenue, roughly three blocks from a burglary scene, according to Times-Dispatch coverage of the incident. Blackwell asked to see Gilliam’s identification, though he didn’t match the description of the suspect, before Gilliam reportedly pointed the gun at Blackwell.

It was the fifth fatal shooting by Richmond police officers in a little more than a year, putting the department under intense scrutiny. Ultimately, just one officer, not Blackwell, was charged in one of the shootings. That officer was tried three times, and after two mistrials was acquitted in February 2004.

Stoney, when asked about the 2002 shooting on Thursday, said that he is aware of Blackwell’s record and that he supports the chief.

“I like his record of service,” Stoney said of Blackwell after his meeting with officers. “He is a former Marine who brings discipline and the sort of composure necessary to be a chief of a police department during these uncertain times. I believe in his leadership and I know that he’s the man to get the job done.”

Blackwell joined the department in December 1997 and has served as commander of the 4th Precinct, which was recognized as “Precinct of the Year” for crime reduction three consecutive years during his time in charge, according to a news release issued from a police department spokesman. Blackwell also was a member of the SWAT team and is the department’s most recent graduate of the FBI National Academy.

The chief’s statements on Thursday were met with some pushback online.

Del. Lee Carter, D-Manassas, tweeted about the 2002 shooting involving the new chief: “Richmond’s interim police chief just held his first press conference, where he angrily promised to ‘take the city back’ and said that his involvement in a shooting is irrelevant to what’s happening now in Richmond. This does not inspire confidence.”

The activist group Richmond For All said on Twitter that the appointment of Blackwell “reinforces what the public already knew: justice lies in the hands of the people, not the police. Community oversight now.”

Allan-Charles Chipman, who is running for Richmond City Council, called it “disturbing news” that the new chief didn’t want to discuss the incident with the media.

“Is this the ‘good job’ Levar Stoney was talking about? Is Levar’s vision of accountability promoting this type of activity?”

Why this whole Australia town is underground

Why this whole Australia town is underground

William “Jody” Blackwell will remain in command until July 1, then will return to his previous role in the department.

Richmond Mayor Levar Stoney was asked by the media Thursday if he planned to resign. He said no.