Video, documents related to tear-gassing of Lee monument demonstrators to be made public

The man Richmond police shot and killed along Interstate 95/64 during Monday evening’s commute was a high school science teacher who had graduated with honors from Virginia Commonwealth University.

The Richmond Police Department has identified Marcus-David L. Peters, 24, of the 6700 block of Dartmouth Avenue in Henrico County, as the man who they said charged one of its officers after hitting three cars, leading police on a short pursuit, and dancing and rolling naked on the interstate.

“That was not my son,” said Barbara Peters, his mother. “This is just so out of character. Something went terribly wrong.”

The cause of Peters' death was gunshot wounds to his abdomen, the state medical examiner's office said Wednesday.

Shortly after 5:30 p.m., an RPD officer saw Peters driving a sedan that struck another vehicle at the intersection of West Franklin and North Belvidere streets, police said Tuesday. He continued driving and the officer followed him north and onto the I-95/64 ramp at Chamberlayne Avenue.

Peters lost control of his vehicle after striking two other vehicles on the ramp, police said. He emerged naked from the disabled vehicle and ran into the northbound lanes of I-95/64. Witnesses said they saw him dancing and rolling around on the interstate before running back to the on-ramp.

Police said Peters then charged the Richmond officer, who deployed his Taser in an effort to disable Peters. The Taser was ineffective, police said, so the officer fired his service weapon, striking Peters, who was unarmed.

Peters was transported to a hospital where he died shortly after midnight.

His high school class selected him as a student speaker at graduation, which was covered by the local Southside Sentinel. In his commencement address, Peters appeared optimistic and said he was “excited for our future.”

“Each and every one of you has something special to offer the world,” he said, according to the paper. “You have your own unique gift. We are all assets to society.”

He went on: “The trying times of life will only make us strong individuals. Nothing in this life that has value is going to come easy.”

His family called the speech moving and said it caused “the gymnasium to erupt in a round of applause.”

“His pursuit for a career as a trauma surgeon would unknowingly take a detour as he discovered his passion for education,” the family said in a statement.

He taught at Essex High School, according to his family. The school’s website lists “Marcus Peters” among its science teachers. The family said he also taught a “life skills” class; school officials could not be reached Tuesday.

“The hopes for these additional lessons were to help students develop fundamental skills for overall success,” Peters’ family said. “He would often say, ‘The students just need to know that someone cares about them and need a role model to look up to.’ He tried his very best to do just that.”

His family said “his personality and big grin was so contagious. It was almost impossible to not befriend him.”

Chief Alfred Durham spoke with the family Tuesday to offer his condolences.

“We are all deeply affected by what happened here — by the loss of life,” Durham said in a statement. “Our officers do not take the use of deadly force lightly. I think it’s important to remember that being naked does not remove a threat. So far, the eyewitness accounts we’ve heard have been consistent: our officer tried using verbal commands, then used non-lethal force first by deploying his Taser before using his service weapon.”

The department refused to answer additional questions about the incident citing the ongoing investigation.

RPD detectives are asking eyewitnesses to contact them and share their accounts and any photographs or videos .

The officer who shot Peters had 10 years of service with the department. He has not been identified and was placed on administrative leave, which is standard procedure while the department’s Force Investigation Team conducts its investigation. The officer’s name will be released once a risk assessment has been completed, according to police.

Anyone with information is asked to call Major Crimes Detective R. Wigfall at (804) 646-6769 or contact Crime Stoppers at 780-1000 or at www.7801000.com. The P3 Tips Crime Stoppers app for smartphones may also be used to submit still photographs or videos. All three Crime Stoppers methods of contact are anonymous.

18 of the most popular articles of 2018 on Richmond.com

Here are some of the most popular articles written by Times-Dispatch staff in 2018.

UPDATED: Naked man who was shot on Interstate 95/64 by Richmond police has died

A naked man who was shot by a Richmond police officer on Interstate 95/64 during Monday’s evening rush hour has died, authorities said Tuesday.

Williams: If the Richmond Police Department continues to reject transparency, it will sacrifice trust

There was no toy gun. No mobile phone. No pill bottle. No pocket to reach into.

He taught teenagers all day Monday. That evening, he was shot by police responding to his bizarre behavior. His grieving family is trying to understand why.

MIDDLESEX — Marcus-David Lamar Peters taught a full day of classes on Monday at Essex High School, where he taught biology.

Eighteen seconds before he was fatally shot by a Richmond police officer on May 14, Marcus-David Peters, naked and unarmed, sat straight up af…

Monkeypox: US ‘drops the ball’ on tests amid vaccine shortage

Monkeypox: US ‘drops the ball’ on tests amid vaccine shortage

Richmond police shot a man Monday during the evening rush hour after he crashed his car and ran naked into traffic on Interstate 95/64. 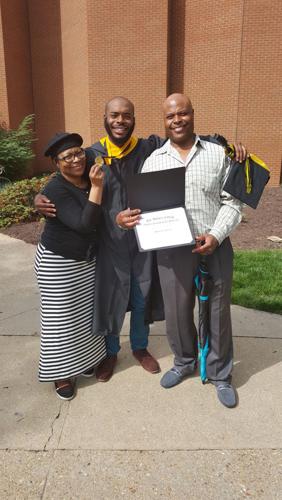 Marcus-David Peters (center) suffered a mental health crisis in 2018 that led to his shooting by a police officer.