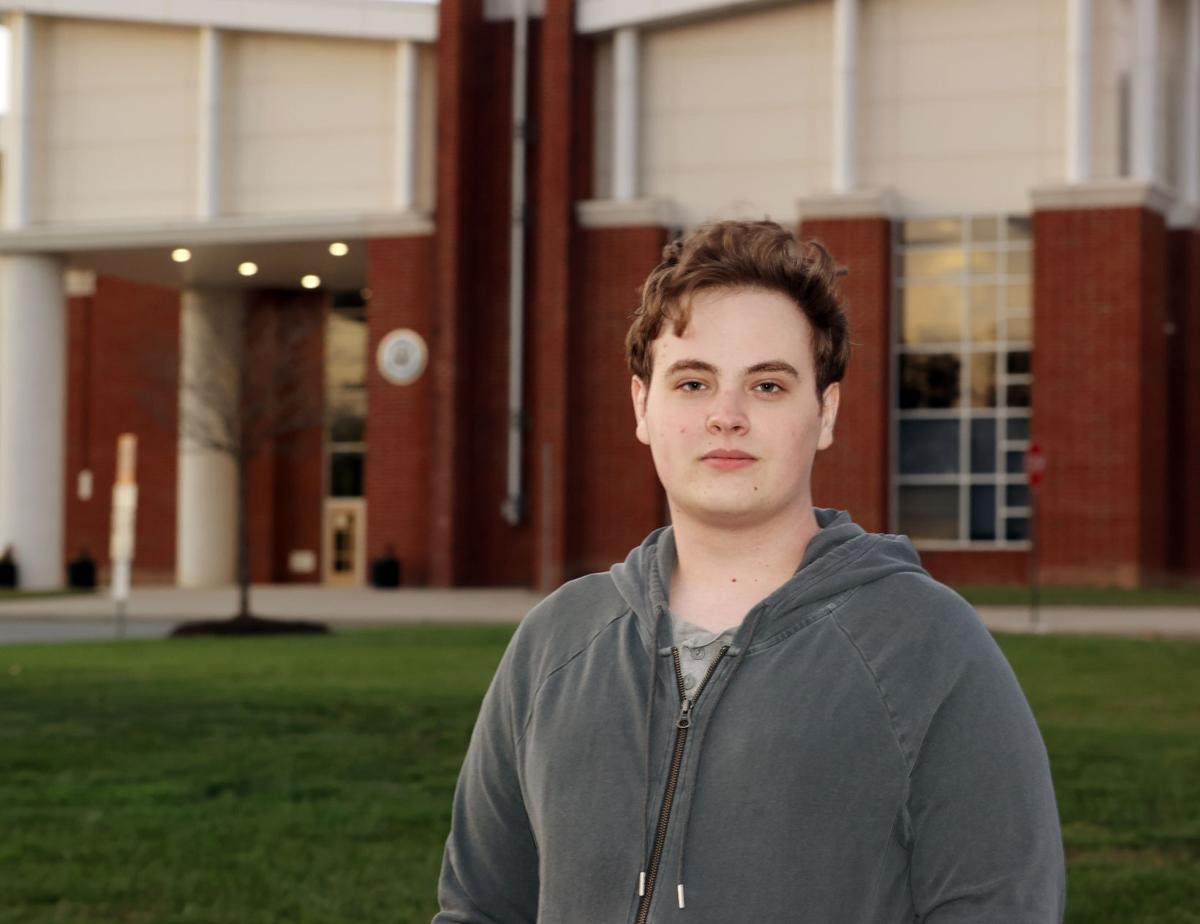 Kenton Vizdos was suspended from Deep Run High School after a silent protest against racial injustice during a class. The ACLU is representing him, citing free-speech issues. 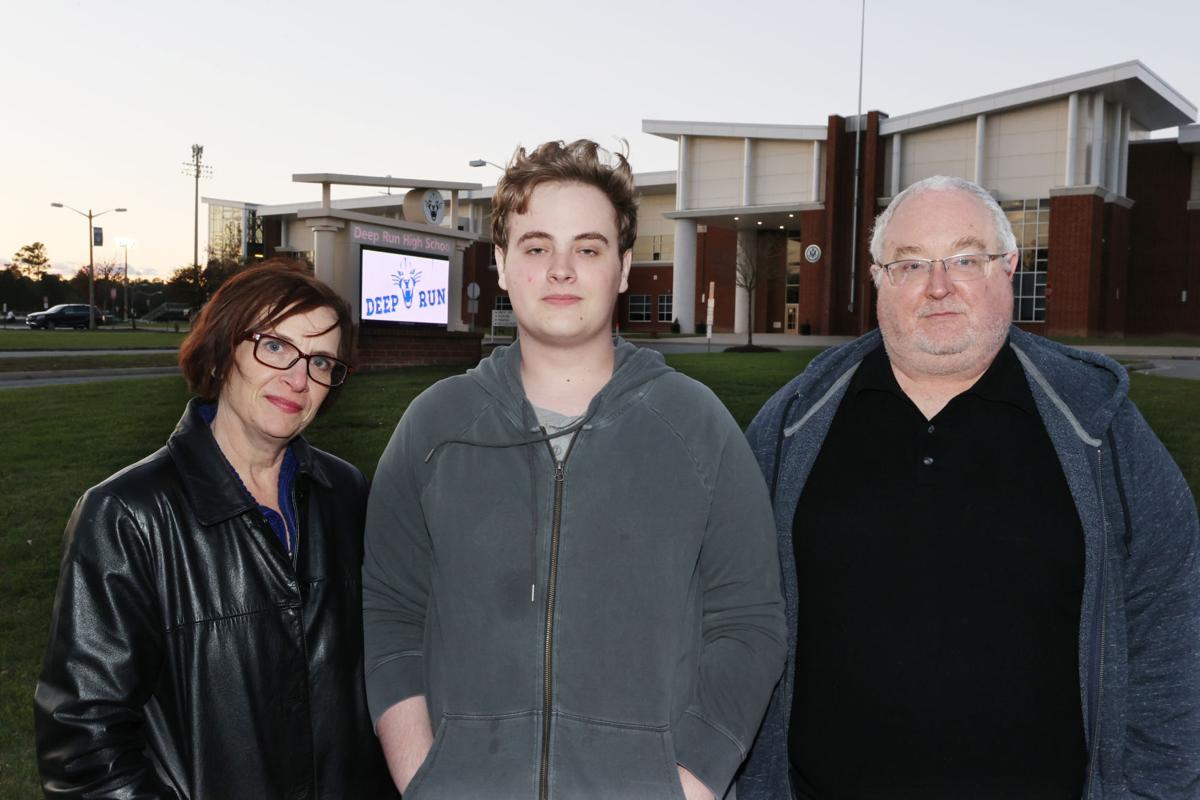 Kenton Vizdos was suspended from Deep Run High School after doing a silent protest against racial injustice and fascism during a class. He is shown with his parents Lorah,L, and Michael Vizdos. 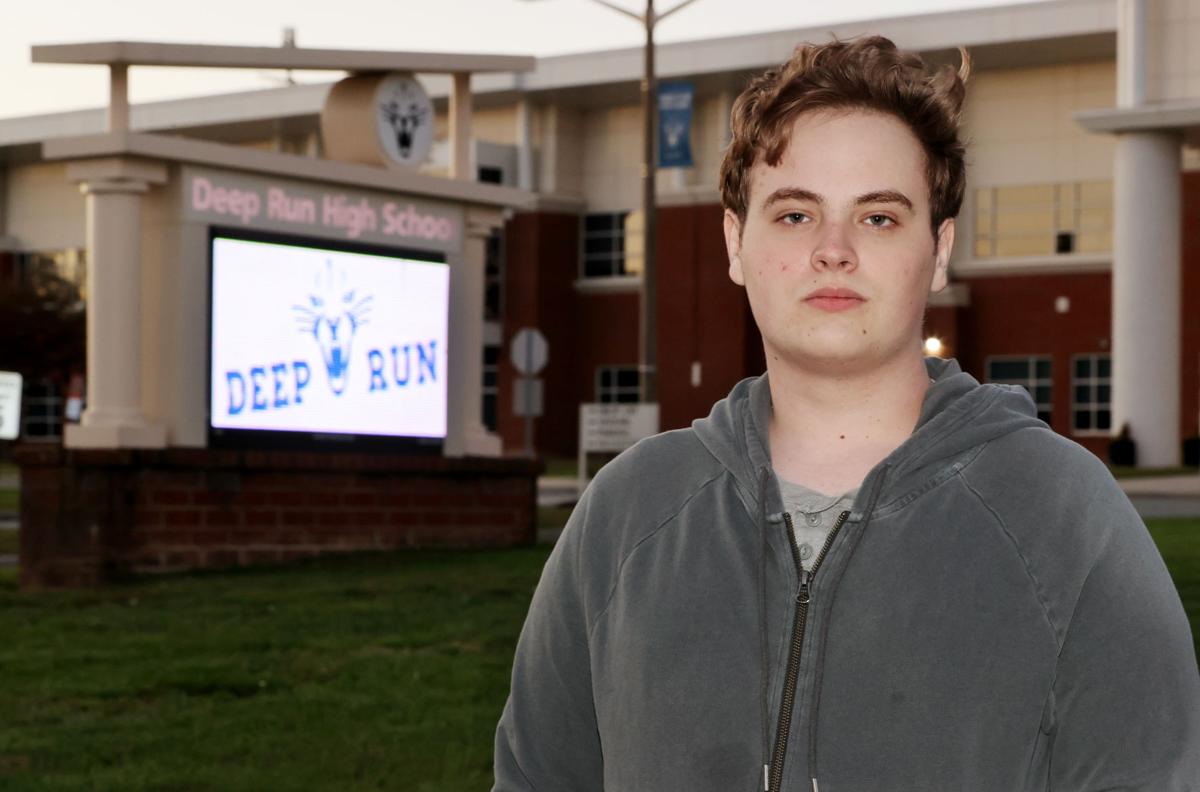 Kenton Vizdos was suspended from Deep Run High School after doing a silent protest against racial injustice and fascism during a class.

The slides, flickering silently over Kenton Vizdos’ corner of the virtual classroom the morning after Election Day, wouldn’t result in his suspension. At least, not if the 17-year-old student stopped substituting his face on the screen with photos showing the words “BLACK LIVES MATTER” and images calling modern-day policemen former “slave catchers.”

He saw the ultimatum as “good trouble,” a nod to civil rights pioneer and Rep. John Lewis, who died in July. The administration called his 55-page slideshow a disruption.

“I’ve been at Deep Run for three years and I’ve seen all of the issues there. How administrators just completely ignore racism and write it off as instances that are untrue,” said Vizdos, who is white. “Or, [they] don’t even follow up at all.”

On Nov. 6, two days after one of his teachers reported him, Vizdos was suspended for two days.

When he returned to online classes, he protested again, with a static image of more than 20 Black lives lost to police violence replacing the virtual square Henrico County Public Schools required he fill with his face and initials. Text over the image said that police’s behavior in each of the cases was “endorsed by President Trump.”

Now the ACLU of Virginia is representing Vizdos, casting the incident as a school undermining a student’s constitutional right to free speech.

“We disagree with the ACLU’s characterization of the issues,” Henrico schools spokesperson Andy Jenks wrote in an email. “This matter did not result from the content of the student’s speech. Aside from that, we’ll decline further public comment until the next appropriate time.”

The punishment, one of the first the ACLU has seen in Virginia since the start of the pandemic, raises questions about discipline in the realm of online learning: When class is a square on a computer screen, how much control does a school have over what appears on a 3x3-centimeter tile and where’s the line?

Henrico Schools spokesman Andy Jenks said he can’t comment on individual cases, but that no one has been suspended based on the content of a virtual protest. He said all students are expected to follow the rules in the Code of Student Conduct, the technology agreement and other classroom rules. The school division allows teachers to determine what background images students are allowed to display when their camera is off.

Vizdos said he skirted the rule by using a webcam to project the slides, a workaround the handbook does not address.

In a letter to the school on Wednesday, ACLU of Virginia Legal Director Eden Heilman called for the suspensions to be dropped, Vizdos to be reinstated in his classes and for updated HCPS policies to reflect students’ rights to free speech in public schools as outlined in Tinker v. Des Moines — a 1965 Supreme Court case decision that came after students were suspended for wearing armbands that protested the Vietnam War.

The opinion hinges on whether the student protests “materially and substantially interfere” or disrupt school operations.

In Virginia, 67.5% of short-term suspensions in the 2016-17 school year fell under the umbrella of disruption and defiance of authority, according to a 2018 Legal Aid Justice Center report.

But determining what qualifies as disruptive in schools is subjective, said Miranda Johnson, a clinical professor of law who studies school discipline at Loyola University Chicago.

“Because there’s not a clear guidance on whether an offense falls within some of these discretionary categories, there can be an escalating severity of offenses as the school becomes more frustrated with the students’ behavior,” Johnson said. “No one’s really at their best selves right now. And all of that puts us at heightened risk of having our own biases interfere with decision making.”

In the lead-up to the disciplinary action, teachers asked Vizdos to disable the custom background, which showed the slides about racial injustice, on the online classroom platform on Nov. 4. He declined, citing his right to protest.

Other students could also choose to turn off his video if it was disrupting their learning, said Vizdos.

The explanation wasn’t enough for his second teacher, who reported his actions and kicked him out of the virtual classroom. Administration contacted his parents to influence Vizdos into turning the presentation off. They declined. Then the administration asked for Vizdos’ cellphone number.

“I couldn’t be more proud. This is exactly what I raised my kids to do,” said Vizdos’ mother, Lorah.

A meeting with the principal and vice principal on Nov. 4 indicated further disciplinary actions would ensue if Vizdos didn’t stop.

He kept going in his next classes.

In a Nov. 5 email obtained by the Richmond Times-Dispatch addressed to him and his parents, with Principal Brian Fellows copied, Deep Run’s Vice Principal Laura McKinney indicated a 1-to-2 day suspension would occur if a teacher reported the “scrolling protest” again.

“We understand the ideas and injustices you are standing up for and know it is with honorable intentions,” McKinney wrote. “I am curious as to what you hope to accomplish within your classes with the scrolling protest. Could there possibly be a better place for your action to have a larger effect, such as joining the Equity Ambassadors or Minority Student Union who often champion these causes and look for productive resolutions?”

In the ACLU’s letter to Deep Run, Heilman noted that “schools do not get to determine how its students may express their speech on public issues in school.”

A driving force behind Vizdos’ protest was the lack of action he saw from faculty and students following allegations of pervasive racism in HCPS, including Deep Run, a predominantly white school in Short Pump where Black students are about 7% of the student population and Latinos account for about 5%. The total enrollment of Deep Run in the 2019-20 school year was 1,848.

After the killing of George Floyd on Memorial Day, anonymous Instagram accounts in the Richmond area began posting stories of racism in schools. The Black @ HCPS account alone has garnered more than 6,200 followers since its inception on June 18 and posted over 350 stories about the district, which has 72 schools.

According to an account owner, who asked to remain anonymous for fear of retaliation, they’ve received nearly 700 total reports. About 100 of those are about Deep Run.

Stories include students saying the N-word without repercussion from teachers, administration almost approving a Confederacy club and teachers making racist jokes toward Black, Hispanic and Asian students, who are nearly 21% of Deep Run’s student count.

On June 22, the HCPS Instagram responded with: “We hear you.”

“We value the courage of the individuals whose voices were silenced for too long,” wrote HCPS Superintendent Amy Cashwell. “It’s what we need to hear if we’re to enact the changes necessary for the equitable and inclusive school environment we’re striving for every day.”

But comments below the post called the statement “performative” and pushed for concrete steps forward.

Vizdos said he has yet to see them five months later as he wrangles the same school system for suspending him after protesting racial injustice.

His disciplinary hearing is on Friday.

Kenton Vizdos was suspended from Deep Run High School after a silent protest against racial injustice during a class. The ACLU is representing him, citing free-speech issues.

Kenton Vizdos was suspended from Deep Run High School after doing a silent protest against racial injustice and fascism during a class. He is shown with his parents Lorah,L, and Michael Vizdos.

Kenton Vizdos was suspended from Deep Run High School after doing a silent protest against racial injustice and fascism during a class.