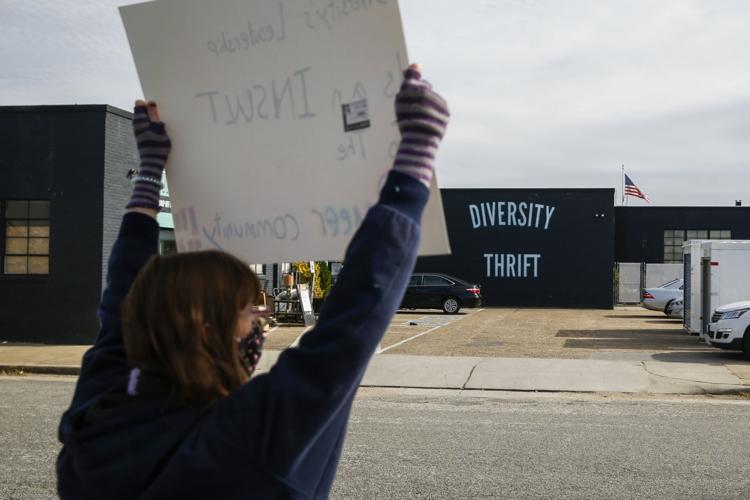 Employees at Diversity Thrift demonstrated outside of the store on Sherwood Avenue in North Richmond on Sunday. 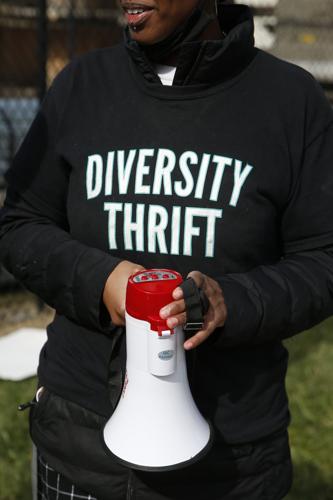 Diversity Thrift employees protested outside the store in Richmond on Sunday.

Many employees at Diversity Thrift in Richmond refused to work this weekend, saying they are subjected to a hostile environment and that a sexual harassment allegation was improperly handled by management.

Employees said about 10 employees refused to work on Saturday and about 15 employees protested on Sunday outside of the Sherwood Avenue store, which raises money for the LGBTQ community. At least 30 people were protesting outside the store Sunday afternoon.

Diversity Thrift, which is run by the nonprofit Diversity Richmond, has 16 non-management employees. The employees demanded that the nonprofit’s board remove Bill Harrison, the president and executive director, as well as another executive from leadership.

The striking employees demanded $16 per hour as a base starting wage. They also called for the authority for employees to add a member to Diversity Richmond’s board as well as to have additional sexual harassment training for managers, mandatory safety training and hiring of more employees.

Luise “Cheezi” Farmer, chair of the Diversity Richmond’s board of directors, who met with employees on Saturday, said she was waiting for them to send a written list of demands and told them she would arrange a meeting with the executive committee of the board.

The Sunday protest caught her by surprise, she said.

“I wasn’t given the opportunity” to schedule a meeting, Farmer said. The executive committee was already scheduled to meet Monday and will discuss the situation, she said.

“We do value our staff,” she said.

Jeremy Stump, a weekend truck driver at Diversity Thrift who helped lead the protest, said employees told Farmer on Saturday that they wanted a show of faith by the board of directors, but by Sunday morning they had heard nothing.

“We took that as another sign that they’re not taking this seriously,” he said.

Employees, many of whom are LGBTQ people and people of color, said most make $11 an hour, the base starting pay.

Stump said problems have been going on for months and years.

This year, an employee made a complaint about sexual harassment by a supervisor. The supervisor later resigned, but then was hired back as a senior store manager, Stump said. (The manager is not currently employed with the store, Harrison said.)

Employees and the worker who made the complaint felt the allegation was not taken seriously, Stump said.

“It was known that he had committed sexual harassment and was welcomed back,” he said.

Stump said that on Sunday morning, employees asked Harrison to close the store and meet with them and Harrison responded that they were free to picket. Harrison confirmed that conversation.

Harrison acknowledged that the accused supervisor had been rehired, but said all managers were aware that the particular supervisor was not to be working in the building at the same time as the employee who made the complaint.

The sexual harassment allegation “was a very complicated situation that I can’t go into the details of for the protection of all the parties involved,” he said.

Harrison said he respected the right of the employees to voice their concerns.

“These employees are taking part in one of the most beautiful American freedoms I think we have, [which] is protesting when you’re upset,” he said.

In 2019, Diversity Richmond brought in more than $1.3 million in revenue, according to its IRS Form 990, the latest available. Expenses for salaries and benefits were $671,334.

The protesting employees on Sunday chanted as shoppers walked in the store: “Don’t donate, don’t buy!”

“We’re all terrified that this is going to result in us losing our job,” said Diversity Thrift employee Aurora Higgs. “A lot of us are paycheck-to-paycheck.”

Police say a man was shot and killed Tuesday night in the parking lot of a Walmart off Parham Road.

Trooper dragged by SUV that sped off during I-295 traffic stop: SUV

The trooper was on the passenger side of the SUV when the driver sped off, causing the door to close.

Community West Church is giving away Christmas trees this Saturday at 2340 Pump Road in western Henrico beginning at 9 a.m.

Powhatan man identified as victim in Nov 19 crash on U.S. 60 in Powhatan

A Powhatan County man has been identified as the victim in a Nov. 19 fatal crash on U.S. 60 in Powhatan.

The list includes Reagan’s secretary of education, the Louisiana Department of Education and Hillsdale College in Michigan.

A Henrico County man was killed Sunday in an early morning crash on Parham Road at the Interstate 95 interchange in Henrico, police said.

Employees at Diversity Thrift demonstrated outside of the store on Sherwood Avenue in North Richmond on Sunday.

Diversity Thrift employees protested outside the store in Richmond on Sunday.