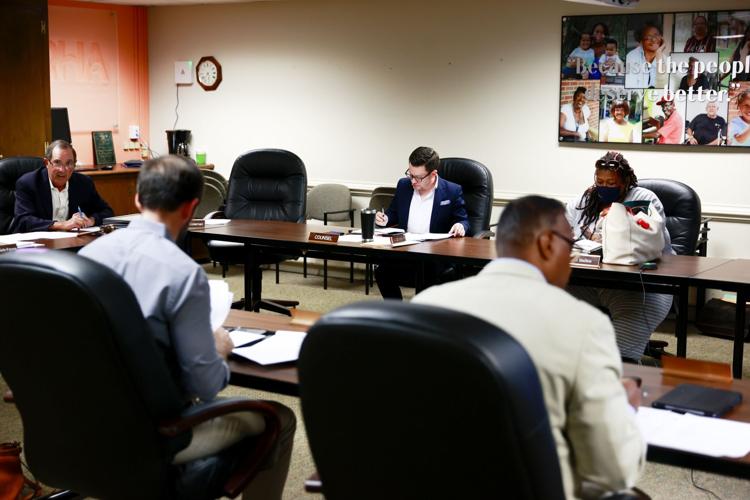 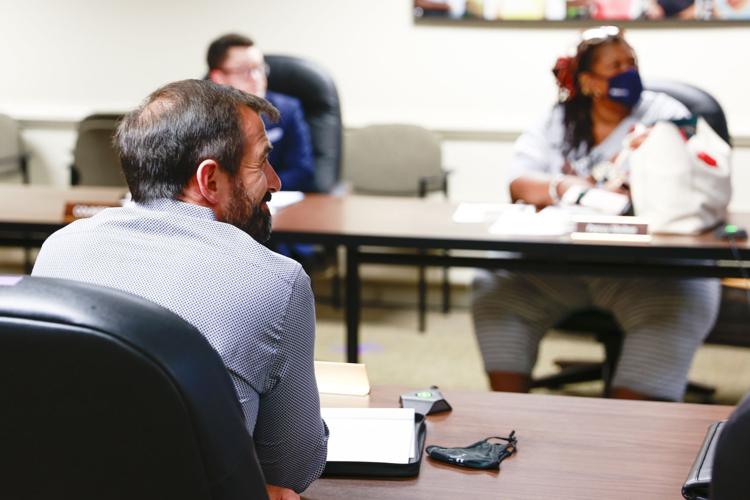 Commissioner Barrett Hardiman listens during a meeting on Wednesday, July 21, 2021 at Richmond Redevelopment and Housing Authority headquarters in Richmond, Virginia.

A divided Richmond Redevelopment and Housing Authority Board of Commissioners clashed with its staff Thursday night over the inclusion of three men on the agency’s no-trespassing list.

Over objections from its general counsel and director of public safety, a plurality of the board ordered staff to remove the men from the list. The men had been banned from returning to RRHA property over the summer following an incident in Whitcomb Court. One of the men said he was there to bring diapers to his family.

Several board members expressed shock and outrage at a video of what occurred, thrusting enforcement of the controversial policy back into the spotlight.

Whether staff would comply with the directive from its governing board remained an open question Friday morning. RRHA’s general counsel told the board it lacked the authority to intervene during the meeting and a spokeswoman declined to say Friday whether staff planned to remove the names.

“I believe the policy was abused in its use, and staff and the police department was incorrect in making this decision [to bar them],” said Barrett Hardiman, a commissioner who pushed for the names to be removed from the list.

“The lives of these three men were put in jeopardy based on the way the police department was contacted from what I’ve heard talking to the young men personally. This is not OK. This is exactly the kind of thing that I said we need to make sure is not happening.”

RRHA announced changes to its long-standing no-trespassing policy last month, admitting at the time the crime-prevention tool had grown “unmanageable and ineffective.” Some 10,000 names were added to the list since the late ‘90s, and those directly impacted by it say it led the Richmond Police Department to stop and search them on sight.

The changes included shorter bans and automatic removal of most names from the list, though the housing authority did not notify the individuals it removed them from the list. And police refuse to release the 250 names that remained on it as of August.

But advocates and some board members have said those changes did not go far enough. Some have worried the revised policy still leaves open the door for harassment of people who pose no threat to public safety in public housing.

For some on the board, that concern played out in a June incident at Whitcomb Court.

In a video that circulated on social media earlier this month, Richmond Police officer Mark Sims was shown arguing with a man who said he was at the East End complex to bring diapers for his children who live there. During a heated back and forth, Sims referenced guns stored in a parked car. The man acknowledged the guns belong to him and said he has a right to have them.

Brian Swann, RRHA’s director of public safety, was present at the time of the incident and summoned police to the scene to intervene. A separate person who filmed the incident told Swann he can’t look in the car’s windows. Swann replied that he can and said, “What are you going to do about it?”

Two minutes into the video, Sims told the man he was arguing with that he is barred from the property for “obstruction” after the man does not follow his commands to stand in a particular area.

“That’s why he can’t put me in no cuffs, because he knows he’s wrong,” the man said shortly afterward.

The Richmond Police Department released a statement this month confirming the incident is the subject of an ongoing internal affairs investigation. The department stated that one of the people at the scene was arrested for an “outstanding warrant,” but the department did not specify for what offense.

None of the men who were barred after the incident was identified during the board’s discussion of the incident Thursday. The Times-Dispatch could not immediately confirm their identities.

Swann, whom RRHA hired two years ago to serve as a liaison between its residents and law enforcement, told board members Thursday the video did not tell the whole story of the incident.

“I believe that some board members are making decisions based on a lack of information on what led up to, what happened right before and right after the video,” Swann said. “Without having all the information, I think the board would be remiss in making any decision without at least hearing from me, for one … I think if the board was more informed they might be able to make a decision that’s more just, if you will.”

Over Swann’s objections, the board’s Property Management Committee endorsed removing the names from the list earlier this month. However, when the full board convened Thursday, its agenda did not include an action item about the incident. Hardiman, who originally raised the issue in committee, did so again during the full board meeting.

A plurality of commissioners supported removing the names: Hardiman, Basil Gooden, Bill Johnson and Patrice Shelton. Three voted against it: acting chair Neil Kessler, Robley Jones and Jonathan Coleman. Charlene Pitchford, a tenant representative on the board, abstained. Veronica Blount was not present for the vote.

“I don’t believe we ought to be a judge and a jury on this,” Kessler said before voting against the motion.

Jones, Coleman and Pitchford said they didn’t approve of what they saw in the video, but they did not feel they had enough information to support removing the men from the list. They said they favored a hearing process where more evidence could be shared before the board took any action.

Ben Titter, the housing authority’s general counsel, told the board in advance of the vote it did not have the authority to remove names. A person who is banned can seek to remove themselves from it through an administrative review process, he said. After three years, names are automatically removed from the list under the recent changes to the policy.

“I don’t believe if we want to remain compliant with our policy that the board has adopted, that we don’t have the basis to remove anyone from the list [of banned people] outside of the procedures that are specified in the policy,” Titter said.

Angela Fountain, an RRHA spokeswoman, declined to say Friday morning whether the staff intends to follow the board’s directive.

“RRHA has to discuss the legality of the board’s decision internally, and possibly with outside counsel,” Fountain said.

The school board votes to rename John B. Cary Elementary, Ginter Park Elementary and Binford Middle.

4 teens indicted in fatal shooting of boy, 16, at Cultural Center of India

Four teens have been indicted on murder and firearm charges in connection with a July 2 shooting that killed a 16-year-old boy during a birthday party at the Cultural Center of India.

Police identify motorcyclist killed in I-95 crash in Colonial Heights

One of two serial robbers involved in a multistate crime rampage that authorities said terrorized employees of banks, hotels, gas stations and…

“We all have questions and we can't answer all of them, but we know that coming together tonight the right thing to do,” said the Rev. William Gunter.

In sentencing Erick Ottoniel Obando, 28, in the slaying of Kenneth H. Moore, Judge William Edward Tomko III of Prince George Circuit Court noted that Moore was stabbed numerous times in the neck to the point that he was nearly decapitated.

Authorities are investigating a fatal crash involving an 80-year-old woman near Scott's Addition.

A proposed mixed-used development in Chesterfield’s Clover Hill District is set for a vote from the Board of Supervisors next month.

Commissioner Barrett Hardiman listens during a meeting on Wednesday, July 21, 2021 at Richmond Redevelopment and Housing Authority headquarters in Richmond, Virginia.