TNF: Scores and updates from Patriots vs. Bills

The Hanover County School Board’s agenda for its Tuesday night meeting included a review of the controversial proposed policy regarding the treatment of transgender students.

The policy, if approved, would require transgender students, along with their parents or guardians, to submit a written request to school administration asking for access to restrooms, locker rooms or changing facilities that align with the students’ gender identities.

The conversation about the proposed policy was limited to a presentation by School Board Attorney Lisa Seward. There was no conversation between board members.

The policy suggests that the written request may contain several personal documents related to the student including their disciplinary or criminal records, as well as signed statements from the student’s doctor or therapist “verifying that the student has been diagnosed with gender dysphoria and/or that the student consistently and authentically expresses a binary gender identity.” Seward clarified that the documents suggested in the policy are not required.

The proposal was largely drafted by the Arizona-based organization Alliance Defending Freedom, according to Seward. The ADF is a conservative legal advocacy organization with expressed anti-LGBTQ views. The board voted in March to allow ADF to review its policy. 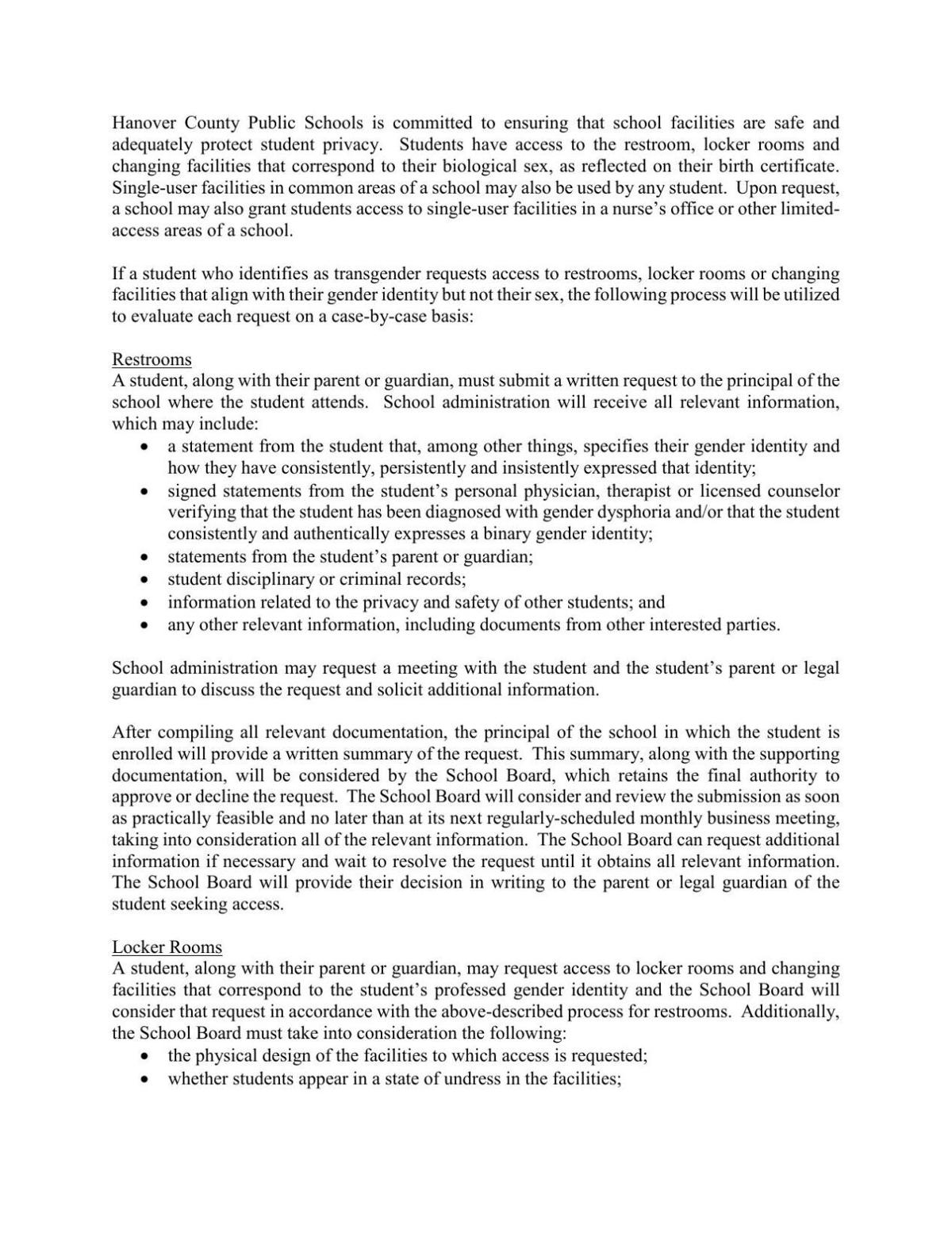 Parents and community members flooded the School Board chambers on Tuesday night to speak at public comment.

Dana Clark, who identified as the parent of a transgender child, said the proposed policy implies that transgender students are degenerates.

“Not only does he have to explain transgenderism to you, not only do I have to support it, but somehow we’re to give you personal, invasive information from our medical provider or therapist to also support who he is — and all of this is just to use the bathroom,” Clark said at the meeting.

Some people spoke in favor of the proposed policy, including Kristin Holte, who in her speech also described the FBI search on Donald Trump’s residence at his Mar-a-Lago Club in Palm Beach, Fla., on Monday as “the political weaponization of the FBI and DOJ.”

“The majority of Hanover County supports parental rights and safe bathrooms for all students,” Holte said. “Please do everything you can to ensure that this policy protects the safety of every student supporting the provision that requires a criminal or disciplinary history.”

Several community members also spoke about the logo on T-shirts and other materials used during a HCPS conference last week that resembles a swastika. Superintendent Michael Gill, in a message to families and staff last week, apologized for the “mistake and for the emotions that the logo has evoked by its semblance to a swastika.”

Shannon Spiggle, who described herself as a Jewish parent who belongs to the LGBTQ community, compared discrimination of LGBTQ people to the discrimination Jewish people faced during the holocaust.

“When I read the part of policies that require a background check, among other requirements just for a child to use the restroom, I thought about my great grandma,” who is a holocaust survivor, Spiggle said at the meeting. “Instead of talking about the … paperwork and hoops they have to go through just to use the bathroom, learn from the history of the Holocaust. Do not adopt these policies.”

Because of the overwhelming interest in discussing the proposed policy, the School Board scheduled an additional public hearing on Aug. 16 at 7 p.m.

The controversy about the proposed policy that has surrounded HCPS stems from the board’s decision in November to shoot down a policy that would have allowed transgender students to use bathrooms and locker rooms that conform to their gender identities. School boards were required by a Virginia law to adopt such policies before the start of last school year.

A vote on the proposed policy is expected to take place at a special School Board meeting Aug. 30.

Consumed by thoughts of fitness and diet, Katie Brown decided to write her own plan for wellness and created the now popular Real Food with Gr…

The Hanover County School Board on Tuesday is expected to introduce and discuss a new proposed policy regarding the treatment of transgender students.

The superintendent of Hanover schools is apologizing about the district using a logo on T-shirts and other materials that resembles a swastika.

Gov. Youngkin criticized after calling on teachers with LGBTQ students to tell parents

Democrats and LGBTQ advocates are slamming recent remarks from Gov. Glenn Youngkin calling on educators to inform parents about a student’s ge…

France plans to ration power in case of shortages