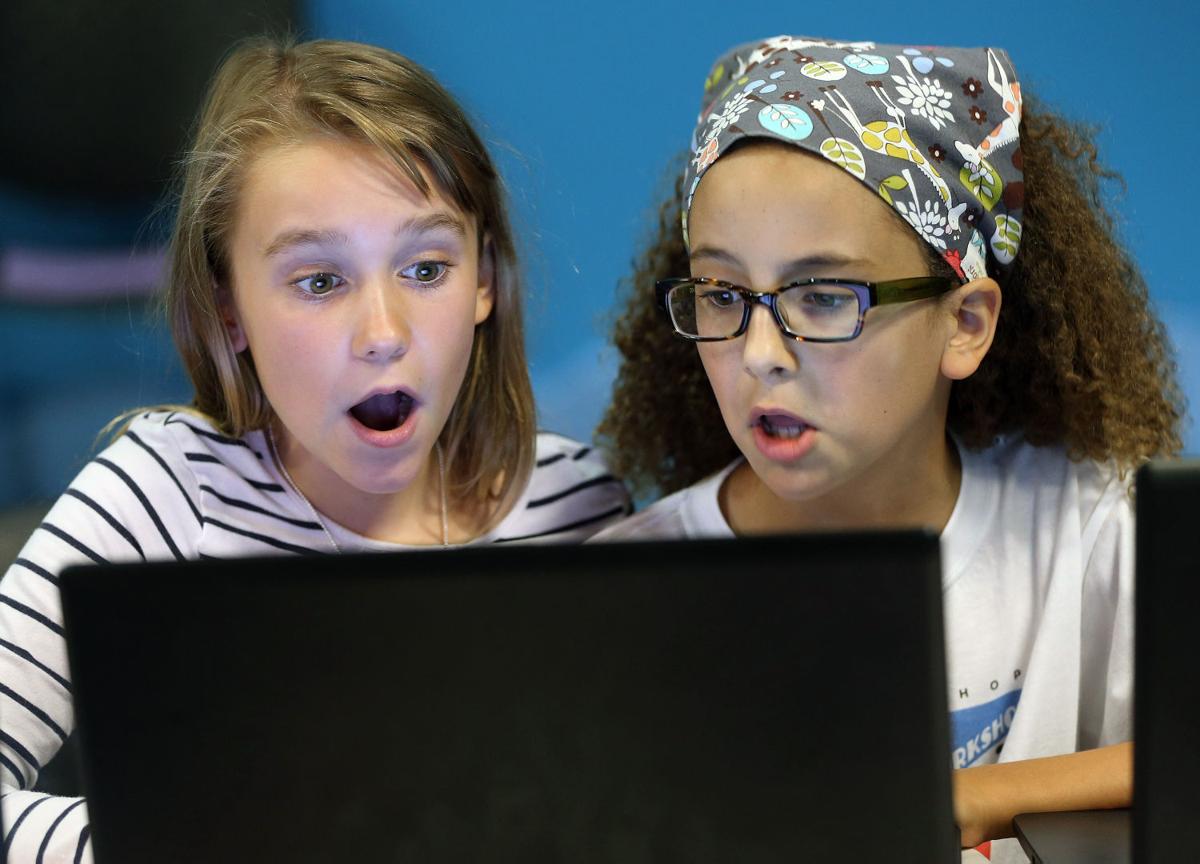 Eight-year-olds Lucie Tindell, left, and Lucy Smith react to a computer program they were figuring out during the CodeVA summer camp which gets girls involved with computer science. The class was being held at the Children's Museum of Richmond. Aug. 11, 2015. 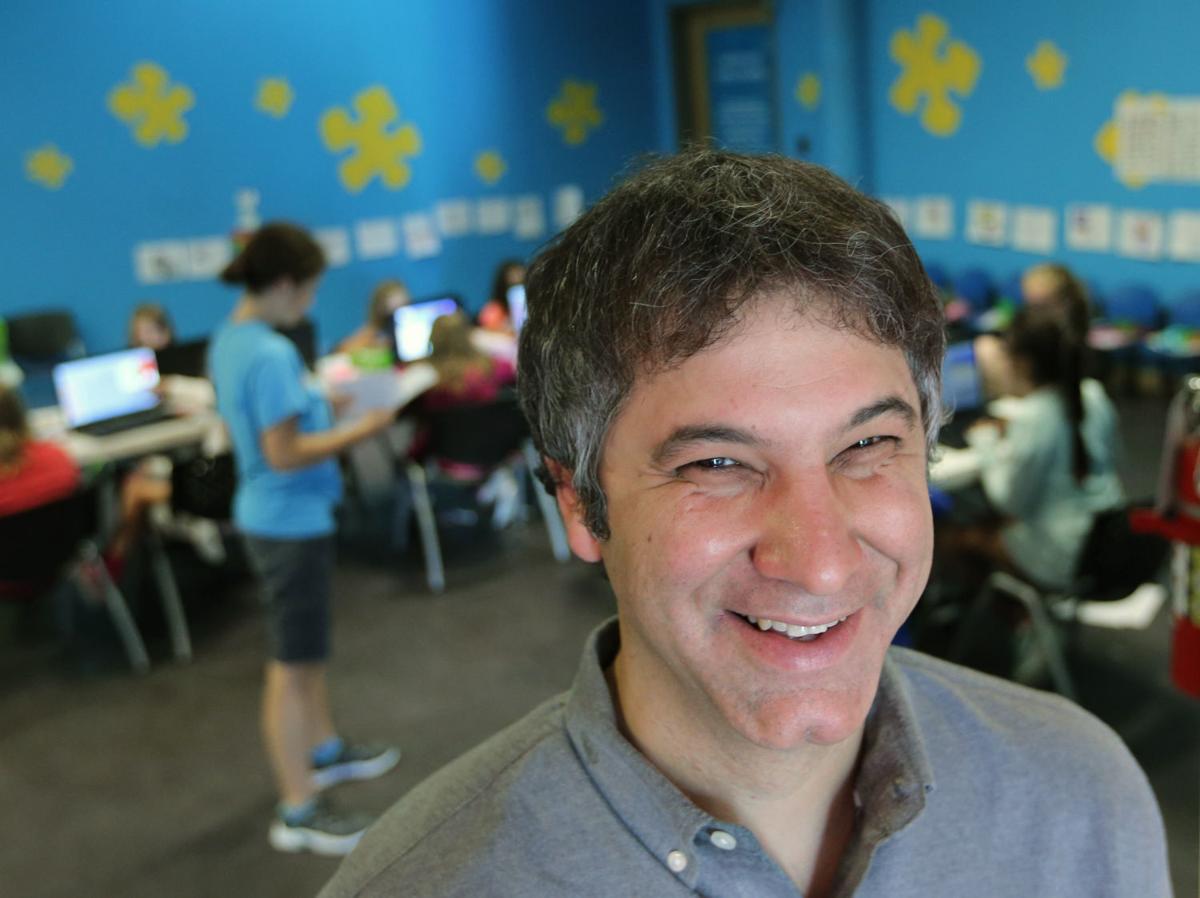 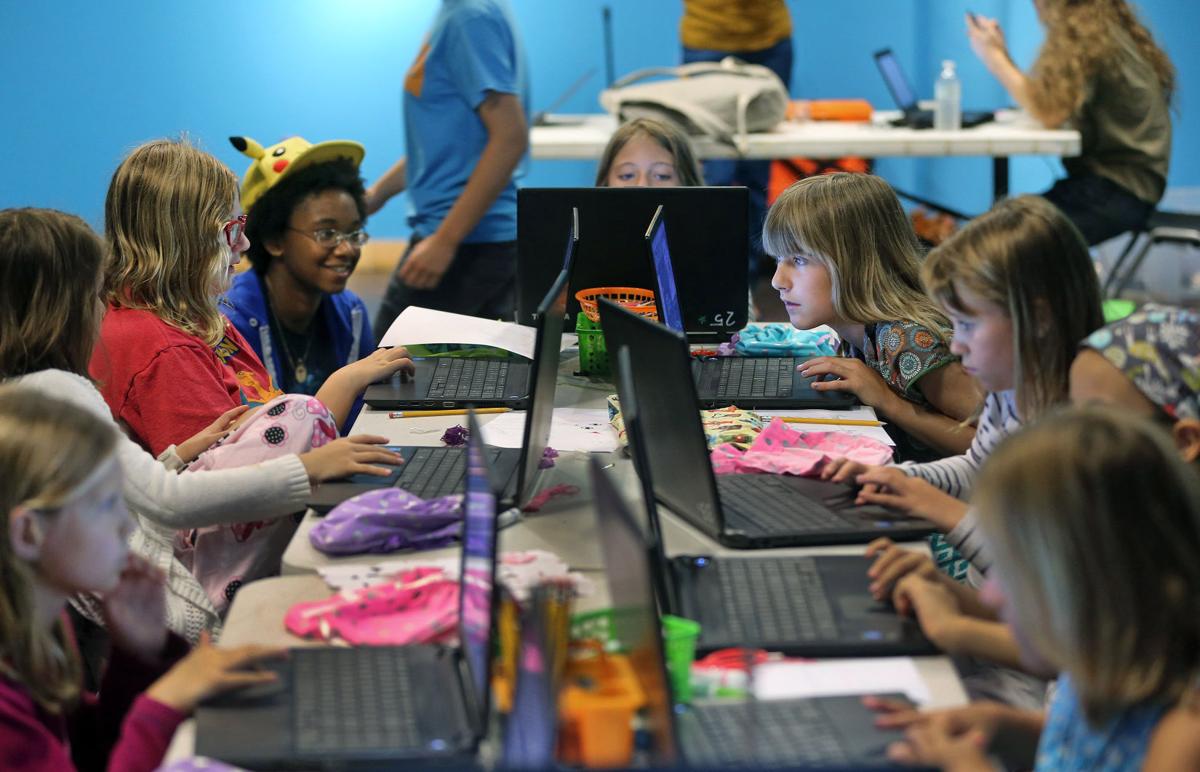 Volunteer Megan Charity (fourth from left, in hat) helps girls attending the CodeVA summer camp work on a computer project. The camp is aimed at getting the girls involved with computer science. Megan is a rising senior at Deep Run High where she is on the Robotics Team 1080. The class was being held at the Children's Museum of Richmond. Aug. 11, 2015.

Computer science summer camps have long been a bastion of all things nerdy, exclusive and expensive.

Chris and Rebecca Dovi of CodeVA are trying to change all of that.

Their Richmond-based nonprofit is dedicated to expanding access to computer science education in Virginia by instructing teachers and students.

CodeVA’s summer camp, the Eureka Workshop, last week hosted a girls-only computer programming camp at the Children’s Museum of Richmond. More than a third of the campers were African-American; Dovi estimated that about a dozen were on full scholarship.

The camp is hoping to help close the gap in what the Dovis see as an unfortunate irony: Virginia and the District of Columbia combined have the most computer programming jobs in the country, but according to code.org, a national advocacy group, only 102 of Virginia’s 332 high schools teach computer science.

The students spent the week learning the basics of computer programming using a kid-friendly programming language.

On Wednesday afternoon, middle school-age girls sat around a rectangular table, each with a laptop open. Many had looks of focused concentration on their faces as they began the afternoon’s activity — creating a game using Scratch, a free online programming language.

One girl said her game was going to be like Flappy Bird but with pop star Prince Royce as the main character.

She described the game: Prince Royce will be flying through a tunnel. The goal is to keep him from crashing into the ceiling or floor, using the space bar to control his elevation. She flipped back and forth between a detailed tutorial and the program as she picked colors for the background and adjusted settings.

Across the room, third-, fourth- and fifth-graders had just wrapped up the day’s activity: programming sting ray-shaped robots to follow a path across the floor.

The girls programmed the robots to follow construction paper taped on the floor, dictating the distance and direction the robot would move and when its LED nose would light up.

Laura Sale, 19, a Virginia Commonwealth University student, helped lead the campers in the activity. She praised the simplicity of the Scratch program, saying that she can “teach a student in 30 minutes how to get a robot rolling all over the place.”

“When the robot first moves, their eyes just get really big,” she said. “It’s like, ‘Oh my goodness, I just made this thing move.’ ”

Most leaders of nonprofits like CodeVA want the world to know about moments like that. But just as the makeup of Eureka Workshop is atypical, so is CodeVA co-founder Chris Dovi.

Dovi, a former Richmond Times-Dispatch reporter, frets that the camp’s mere existence could undercut his organization’s greater mission. The goal of CodeVA is not to start more coding summer camps; the objective is to kill the idea that coding should be relegated to summer camps.

Dovi wants coding to become as integral to public schools as reading and writing.

“Look at how computer science education is talked about,” he said. “Oftentimes it’s an after-school program, a one-off camp or a one-day thing, and then there’s no support or curriculum to go along with it afterwards.”

Dovi fears teaching coding in a camp setting will perpetuate the “pony camp” effect, where a child learns a new skill at camp but returns home with no resources to develop that skill. And he said that despite all the values that a summer camp can impart, the ultimate goal is to equip students for future success in a competitive job market.

“We’re not building self-esteem,” he said. “We’re building an economy.”

When CodeVA started in 2014, the Dovis used his own money to get it off the ground. Chris Dovi said he still does not receive a paycheck. This past May, the organization won $10,000 when it was voted “best social innovation startup” at the Greater Richmond Chamber’s i.e.Startup Competition.

Surprisingly, as coding has become a greater necessity for many jobs, the number of students who graduate having taken a computer science class in school is shrinking. A study by the National Center for Educational Statistics reported that computer science was the only science, technology, engineering and math class that saw decreased enrollment from 1990 to 2009.

And many of the computer science classes that are available have only the most basic curriculum, focusing on typing, using Microsoft Office products and introductory IT skills.

To reverse that trend, CodeVA trains teachers to implement coding into their curriculum.

Since the summer of 2014, CodeVA has trained nearly 400 teachers statewide, according to the organization. Of those, almost 200 are middle and high school teachers who are teaching full curricula or integrating computer science into a math or science class. The remainder are elementary teachers who are integrating computer science concepts that align with the state Standards of Learning into their daily classroom.

Twenty-five percent of the state’s districts have at least one middle or high school teacher trained through CodeVA, and 35 percent have a teacher at some grade level who has trained through the organization.

That training is designed to address a surprising statistic: Of the roughly 370,000 high school students in Virginia, only about 2,000 took the AP Computer Science A Exam in 2014, according to the College Board.

And in 2013, the last year in which a complete breakdown was available, only 16 African-American girls took the exam, the College Board said, while 389 Asian boys took the test, along with 744 white males.

Rebecca Dovi said she wants to “shift the conversation. Why are there these access issues?”

While the kids at the children’s museum played with robots and made games, 22 teachers from across the state had gathered in Chesterfield County to practice teaching coding. The Chesterfield Technical Center was host to CodeVA’s summer professional development for teachers. The teachers in the training receive a stipend to meet for a week over the summer and then several times throughout the school year, attaining close to 100 hours of professional development training.

The training equips teachers to teach Exploring Computer Science, an introductory computer science course that can be taught at both the middle and high school level. A key aspect of the training is making coding accessible to minority populations.

CodeVA wants to attract more black girls and other minorities to coding, and the organization, along with other organizations like Exploring Computer Science, is getting creative in its attempts to do that. The ECS curriculum includes one lesson, called Cornrow Curves, that uses African hair braids to demonstrate algorithms, a building block of any code.

Anita Harper, who teaches business information technology at Huguenot High School, said that in addition to making the material relevant to her students, she tries to help them understand that a career in computer science is extremely lucrative.

“You start with the money,” said Harper. “You say, ‘These are the jobs, and this is how much money you can make.’ ”

Shelita Hodges, who teaches several computer classes at Armstrong High School, was excited about using the coding lessons in her class. She said that she had a student last year who used some of the skills he learned in class to help his manager at McDonald’s more efficiently create weekly schedules.

“The kids don’t know what they know until they do it,” she said.

The U.S. Supreme Court late Thursday turned down bids by Cory Johnson to stop his execution by injection at a federal prison in Indiana.

Va. has released the outlines for who's next in line for COVID-19 vaccines. Here's what they are

Since New Year's Eve, one person in Virginia has died from COVID every hour as state surpasses 5,000 cases for third straight day

Eight-year-olds Lucie Tindell, left, and Lucy Smith react to a computer program they were figuring out during the CodeVA summer camp which gets girls involved with computer science. The class was being held at the Children's Museum of Richmond. Aug. 11, 2015.

Volunteer Megan Charity (fourth from left, in hat) helps girls attending the CodeVA summer camp work on a computer project. The camp is aimed at getting the girls involved with computer science. Megan is a rising senior at Deep Run High where she is on the Robotics Team 1080. The class was being held at the Children's Museum of Richmond. Aug. 11, 2015.