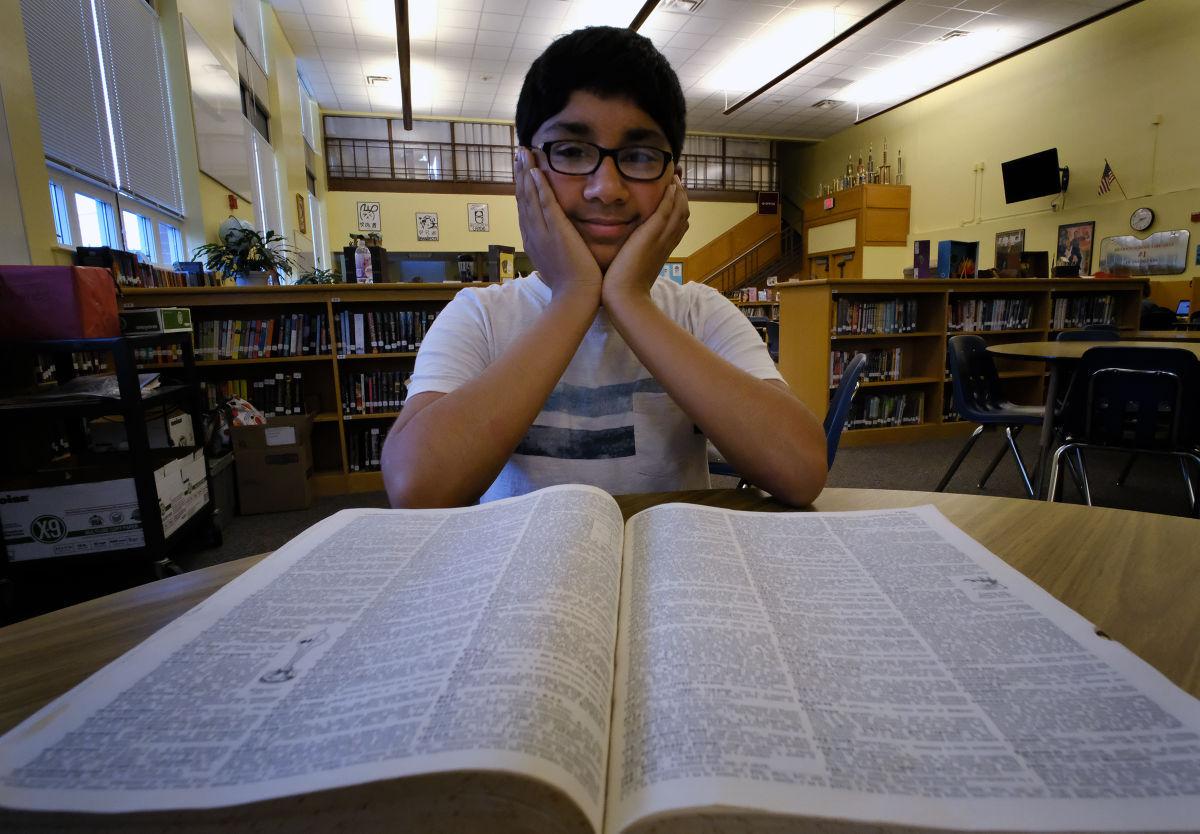 Tejas Muthusamy, 13, the three-time Richmond Times-Dispatch Regional Spelling Bee champion, is a seventh-grader at George H. Moody Middle School in Henrico County. Tejas is heading this week to the Scripps National Spelling Bee, where he has finished in the top 10 the past two years. 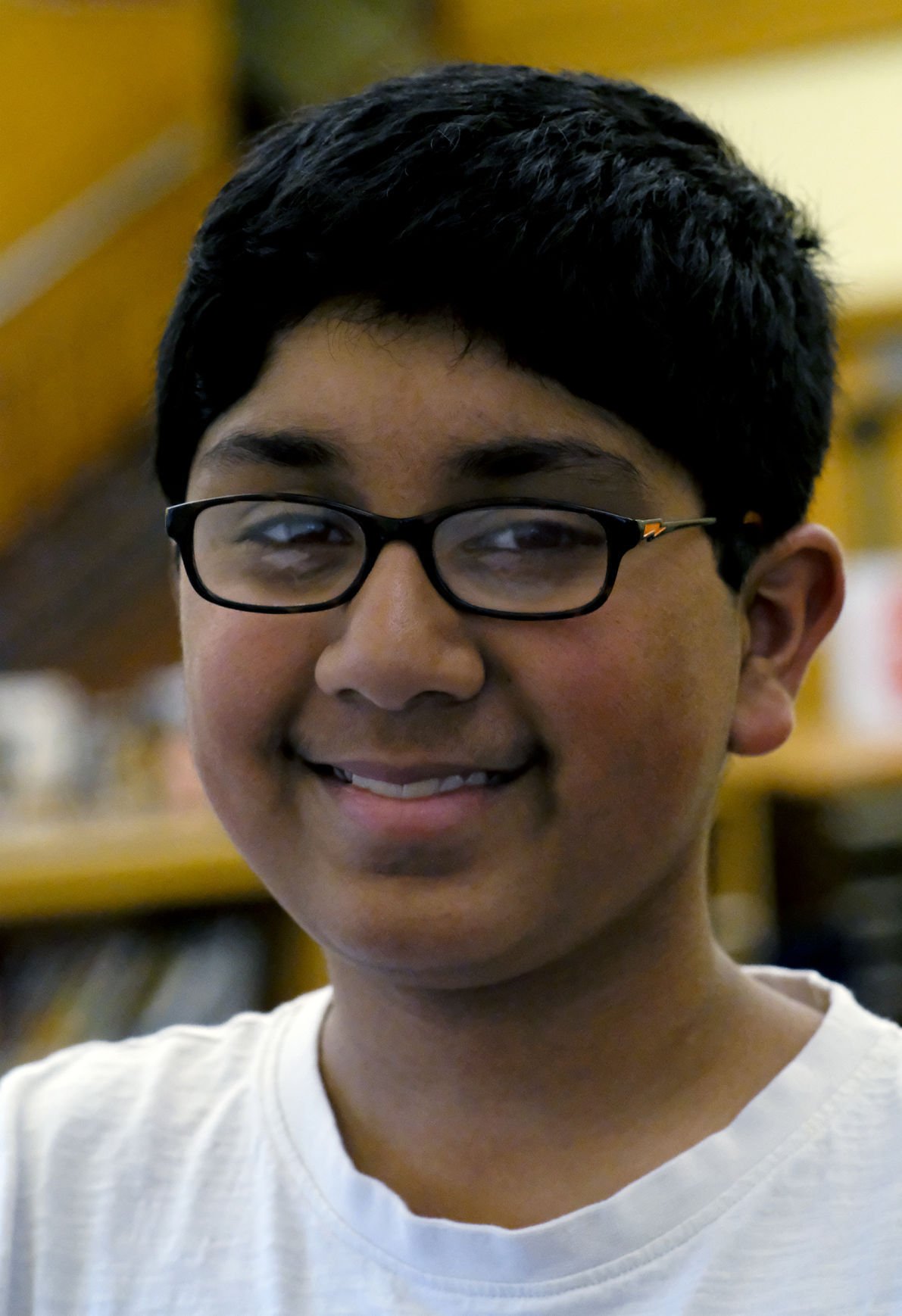 Tejas Muthusamy, 13 (cqbb), the defending regional spelling champion, poses in the school library at Moody Middle School in Richmond, VA Friday, May 20, 2016. He is heading to the national spelling bee next week.

Is the third time really the charm?

Tejas Muthusamy sure hopes so. The 13-year-old Henrico County seventh-grader is heading to the Scripps National Spelling Bee outside Washington this week for his third time.

Tejas, who attends George H. Moody Middle School, is the three-time Richmond Times-Dispatch Regional Spelling Bee champion and has finished in the top 10 at the national competition for the past two years.

But about a week before the big event — where media will clamor for his attention, where ESPN’s cameras will beam his performance nationwide and where he will face a grueling, pressure-packed couple of days of competition — Tejas was not holed up studying.

Instead, he spent two days at a science fair at the University of Mary Washington. He was there to present his project on how different languages influence how you can determine the meaning of specific words. Moody Middle said he took first place in his category, human behavior.

After getting home Thursday night, he spent most of Friday taking end-of-year Standards of Learning tests. He is heading up to the bee today.

Tejas says that although he has been gearing up to compete, he has put less pressure on himself this year. One reason for that is the academic rigor of Moody’s International Baccalaureate program, he said.

But it is also personal.

“This year has been a little bit tough,” he said Friday. “It’s been a lot. But I’ve tried to not just focus on spelling because, obviously, spelling is just one part of my life. I kind of want to, you know, try different things because I’ll never be able to get that opportunity back.”

Along with preparing and competing in spelling bees, Tejas writes for the school’s newspaper, practices classical Indian dancing and is a voracious reader who follows politics closely.

Tejas says two of the biggest lessons he has learned from competing the past few years are how to deal with defeat and how to grow from adversity. In the past, he would cry and leave the room when he missed a word or did not do well.

“Now, even if I don’t do so well, I take it as, ‘OK, I need to do better next time. How can I do better next time?’ ” he said. “That’s something most people get when they become adults. But I think in the spelling bee, kids mature much faster because of all the life lessons that are being thrown at them.”

He finished eighth in the national competition in 2014 and seventh in 2015.

Tejas’ principal, Paul E. Llewellyn, said that during the Scripps competition, he will keep the school and others in the community posted via text and email.

The Henrico school district will keep the public informed on Tejas’ progress via social media.

ESPN3, the network’s streaming channel, will air Wednesday’s preliminaries. The final two rounds of the bee will be televised Thursday on ESPN2 in the morning and ESPN in the evening.

“He’s a very unique individual when it comes to the language, and how to get that language, and where it comes from, and how it breaks down,” Llewellyn said of Tejas. “It’s a science; it’s not guesswork.”

He says he wants to make sure he appreciates every moment.

“That four-year period will be the only time ever that I’ll be able to spell competitively onstage,” Tejas said. “It’s become such a big part of my life now that I can’t really imagine what it’ll be without it.”

The next wave of Chesterfield County students will be going back to school in two weeks.

Tejas Muthusamy, 13, the three-time Richmond Times-Dispatch Regional Spelling Bee champion, is a seventh-grader at George H. Moody Middle School in Henrico County. Tejas is heading this week to the Scripps National Spelling Bee, where he has finished in the top 10 the past two years.

Tejas Muthusamy, 13 (cqbb), the defending regional spelling champion, poses in the school library at Moody Middle School in Richmond, VA Friday, May 20, 2016. He is heading to the national spelling bee next week.