In a sweeping allegation at the university's board of visitors meeting, Wilder, 91, stood behind a microphone and made public three months’ worth of employee quarrels.

“Wow. What a s--- show. It will be four years of disaster,” Burke wrote. “I am so disappointed on anyone who thought he was a better choice. Pure stupidity.”

Burke was then director of the Performance Management Group within VCU's L. Douglas Wilder School of Government and Public Affairs, named for the nation's first elected Black governor.

Days later, in a message to his supervisor, Burke wrote that if Wilder “tries to make things worse, he will find himself in a bad place.”

The dean of the Wilder school, Susan Gooden, perceived Burke’s words as threats and “terroristic language.” She filed a court protective order against Burke and notified him he would be fired with cause.

Now, three months later, Burke is still an employee, and Wilder blames provost Fotis Sotiropoulos. Racism, the former governor said, was behind the decision to keep Burke on staff.

“The dean of the school doesn’t have the authority to dismiss anyone if she happens to be Black and a female,” Wilder said, referring to Gooden. “Am I talking about racism? Yes I am.”

The saga began the evening of Jan. 30 when Wilder received a text message from Burke. He’s currently employed on a one-year contract, according to the university.

“Welcome the Nazis,” he wrote. “I have no respect for anyone who supported him. TM may not have been great. I get that" he wrote, apparently referring to former Gov. Terry McAuliffe, the Democratic nominee who lost to Youngkin. "But this???? WTF. Is this what you wanted, Doug?”

Copies of the text messages, which were typed into public documents, were shared with the Richmond Times-Dispatch.

Wilder, a Democrat who served as governor from 1990-94, did not endorse a candidate in last fall's election, but he criticized McAuliffe for trying to "leap frog" over three African American hopefuls who also sought the Democratic nomination for governor. During Youngkin's transition Wilder teamed with three former Republican governors to serve as advisers to the new governor.

In an interview, Burke said he disapproves of the Republican Party’s efforts to end the teaching of what they consider divisive concepts.

“Four hundred three years of oppression of Black people in Virginia – I think we need to talk about that,” Burke said in the interview. “I will defend that to the end.”

Wilder never responded to the Jan. 30 text message, he said.

Three days later, Burke sent a text to his supervisor, Robyn McDougle, and declined to apologize.

“I stand by what I said. I was right,” Burke wrote. “I will give into people like him no more. If he tries to make things worse, he will find himself in a bad place.”

The text also mentioned Gooden, the dean. “I hate putting Susan in a awkward place, but sometimes we need to stop dancing around narcissists and start to manage them. ... If he can dish it out, he has to learn how to take it and not go running to Susan.”

Gooden, the dean of the school, called Burke’s words “terroristic threats” that have the “clear intention to inflict pain,” according to copies of emails provided by Wilder's office. She filed a complaint to VCU police, saying she feared for her safety. If Burke couldn’t find Wilder, he could use Gooden as a target to release his frustrations, she said. And she requested a protective order against Burke in Richmond General District Court.

In an interview, Burke described his messages as ranting but not threatening. “I don’t ever think of hurting anybody ever,” he said. "I'm not a threat to anybody."

On Feb. 8, Gooden notified Burke he was being fired for breach of contract. But Burke remains employed by the school. Wilder said Sotiropoulos and head lawyer Jake Belue had contacted human resources to “undo” the firing. Burke said he is negotiating with the university on a settlement to leave VCU.

Wilder provided no evidence to show how Sotiropoulos’ actions were racist but added that it’s not typical for a provost to become involved with a school’s hiring or firing. That’s the purview of the dean.

Sotiropoulos declined to comment Friday, other than to say “I have the utmost respect for [former Gov. Wilder.]”

VCU president Michael Rao defended Sotiropoulos, calling him one of the best provosts Rao has ever worked with.

At Friday’s board meeting, Wilder said racism is “practiced and condoned here at the university. Those of you who know me know I don’t make those charges lightly.”

He called on the board to hold the administration responsible, but the body took no action on the matter Friday.

Burke has worked for VCU for nearly 27 years and had good relations with the university, he said. “I certainly regret that Governor Wilder spoke about HR matters in a public forum.”

The list includes Reagan’s secretary of education, the Louisiana Department of Education and Hillsdale College in Michigan.

Taylor steps down as CEO of Henrico Education Foundation

Mike Taylor, who has served as CEO of the Henrico Education Foundation for eight years, announced he is stepping down from the position at the…

The Virginia Department of Education is awarding $143,000 in grants to nine universities to create teacher apprentice residency programs in pa…

The Virginia Department of Education is still working to review more than 71,000 written public comments on its proposed K-12 transgender policies, and new policies will not go into effect until the task is completed.

The school board votes to rename John B. Cary Elementary, Ginter Park Elementary and Binford Middle.

While Chesterfield public schools have surpassed their 2019 numbers, Richmond has about 3,500 fewer students than in 2019.

The state Board of Education is scheduled to review the new draft at its 9 a.m. Thursday meeting in the James Monroe Building.

The new draft contains dozens of references to teaching about slavery. But it scrapped mentions of discussion about the ongoing legacy of slavery.

Williams: In attempting to whitewash history in Virginia classrooms, the Youngkin administration is repeating it 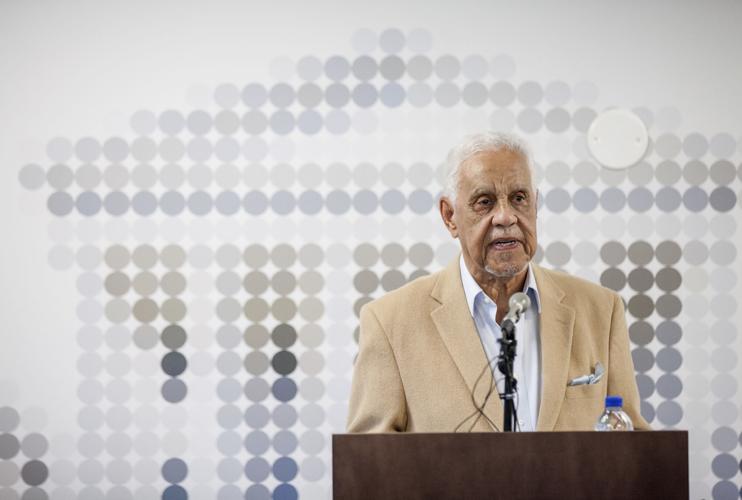 In a message to his supervisor, the employee wrote that if former Gov. L. Douglas Wilder “tries to make things worse, he will find himself in a bad place.”

In a January text message to former Gov. L. Douglas Wilder, a VCU employee wrote "Welcome the Nazis" in regard to the incoming Glenn Youngkin administration. "Trust me, these jerks will come after me for teaching history."