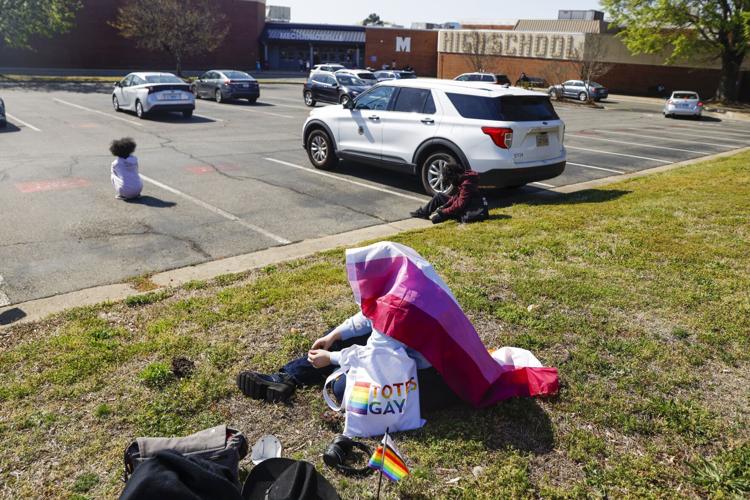 Tori Bryant took a moment to herself during a protest in support of Mechanicsville transgender students last month at Mechanicsville High School. School officials may codify a walkout demonstration ban in the code of conduct. 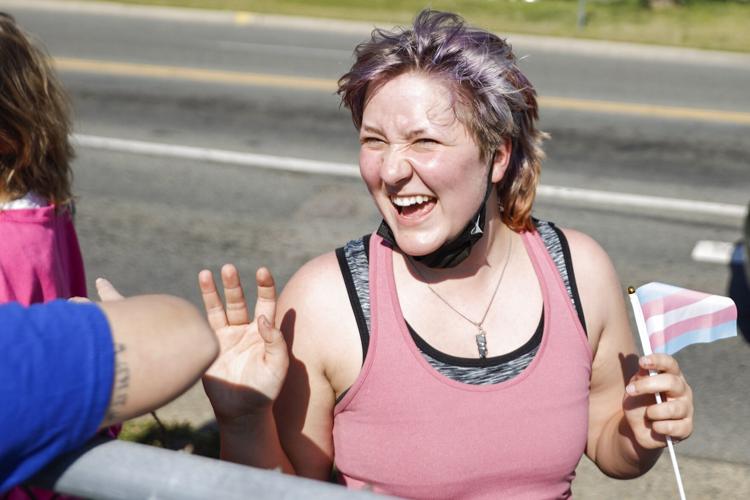 Three student-led protests this school year at three different Hanover County high schools prompted the county’s School Board Tuesday night to consider a proposed addition to the student code of conduct that clarifies its stance on protests and walkouts.

The changes presented would add protests and walkouts to the glossary of definitions at the end of the code.

The proposed changes say, in part, that “demonstrations, including protests and walkouts, are prohibited” and that “any physical, written or verbal disturbance, communication or activity within the school setting or during related activities, which may interfere with teaching or the orderly conduct of school activities, is not allowed.”

The proposed change also says that a student’s participation — including leaving class, campus or their assigned location during school hours — will be subject to disciplinary action.

Protests and walkouts aren’t specifically mentioned in the body of the current code of conduct, but students have been disciplined this school year for participation in such events based on violations outlined in the current code.

Last September, students walked out of Patrick Henry High during the school day to call attention to students’ mental health needs after the suicide of a Patrick Henry student. Students received up to 10-day suspensions for walking out and then remaining outside for hours while ignoring school officials’ repeated requests to go back inside.

On March 18, Atlee High students held a walkout during the school day on school grounds to protest the board’s handling — or lack thereof — of state-mandated policies that give transgender students access to bathrooms and lockers rooms that fit with their identity. Some students received two- or three-day suspensions for their actions.

Another walkout at Mechanicsville High — also for transgender students’ rights — was held on April 22, though that event took place after the school day ended and just off school grounds.

School officials have said Patrick Henry and Atlee students were disciplined because they violated the code of conduct in a number of ways: interfering with learning outside the classroom, failure to be in one’s assigned place and inciting or causing a substantial disturbance to the operation of the school or the safety of the staff and students.

Brian Maltby, a discipline hearing review officer for Hanover schools, told board members Tuesday night that the proposed change clarifies longstanding existing practices already outlined in the code of conduct. He said it addresses student conduct during a protest or walkout, not the nature of the protest or walkout.

In short, “students can’t come and go as they please,” Maltby said, and called the proposed changes “a matter of safety.”

He said by adding protest/walkout to the glossary of definitions in the code, the proposed language “eliminates ambiguity” in handling situations where students participate in walkouts or protests.

Board Vice Chair Bob Hundley, citing concerns from a parent earlier in the evening during the public comment period, asked Maltby if the proposed changes violate First Amendment rights. Maltby — as well as Board Attorney Lisa Seward — said the proposed changes as written do not violate students’ rights.

“You’re not allowed to leave without permission,” Maltby said, referring to students actions during the school day. “The nature of the protest or walkout is irrelevant.”

Ahead of Maltby’s presentation to the board, more than a dozen speakers addressed the board during its public comment period. Most people spoke about the board’s ongoing issues with transgender policies, specifically that it did not approve a model policy back in November that would allow transgender students to use bathrooms and locker rooms that fit with their gender identities. A few spoke about the protest/walkout policy.

Hanover parent Nicole Rossi reminded the board the transgender model policies crafted by the Virginia Department of Education — meant to serve as a guideline for Virginia’s school divisions — were done so by a bipartisan group.

“A bipartisan team worked together to develop a plan to protect our students,” Rossi said, and noted that it shouldn’t matter what those students look like or how they identify. “If we care about the safety of all children ... shouldn’t we proactively protect them?”

Christopher Berg — a parent of two students at Atlee High, one of whom was suspended during the Atlee protest — called the proposed code of conduct changes “unconstitutional, unpatriotic and un-American,” and a “continued campaign” against transgender students.

In addition to the protest/walkout language, board members also heard about another addition to the code of conduct that involves self-defense claims. The proposed language says anyone claiming self-defense during a fight or incident must be “without fault” in provoking or bringing on the fight or incident, have “reasonably feared” at the time that there was “imminent risk of physical harm,” and that they used no more force than reasonably necessary to prevent the threatened harm.

It also says that self-defense is not an excuse for possession or use of a weapon on school property or at any school-sponsored event.

The board could vote on both code of conduct changes in June.

In other news, the board unanimously approved changes to its citizen participation policy. The changes mean that individuals who wish to speak at meetings have to sign up by noon on meeting days, rather than being allowed to sign up in advance or at the meeting.

The policy also now specifies that the board can change the location of its meetings if a larger venue is needed.

31 photos from the Times-Dispatch archives

In 2014, when Cynthia Reyes enrolled her daughter in what was then Greene Elementary School — now Cardinal Elementary — a school employee assu…

The massacre in which a white gunman stormed into a Buffalo, N.Y., grocery store and killed 10 Black shoppers and employees underscores that s…

VSU will charge roughly $9,700 in tuition and fees next school year. Students who live on campus will pay a total $21,000 annually.

Wow! Huge meteor captured flying over the skies in England

Wow! Huge meteor captured flying over the skies in England

Tori Bryant took a moment to herself during a protest in support of Mechanicsville transgender students last month at Mechanicsville High School. School officials may codify a walkout demonstration ban in the code of conduct.