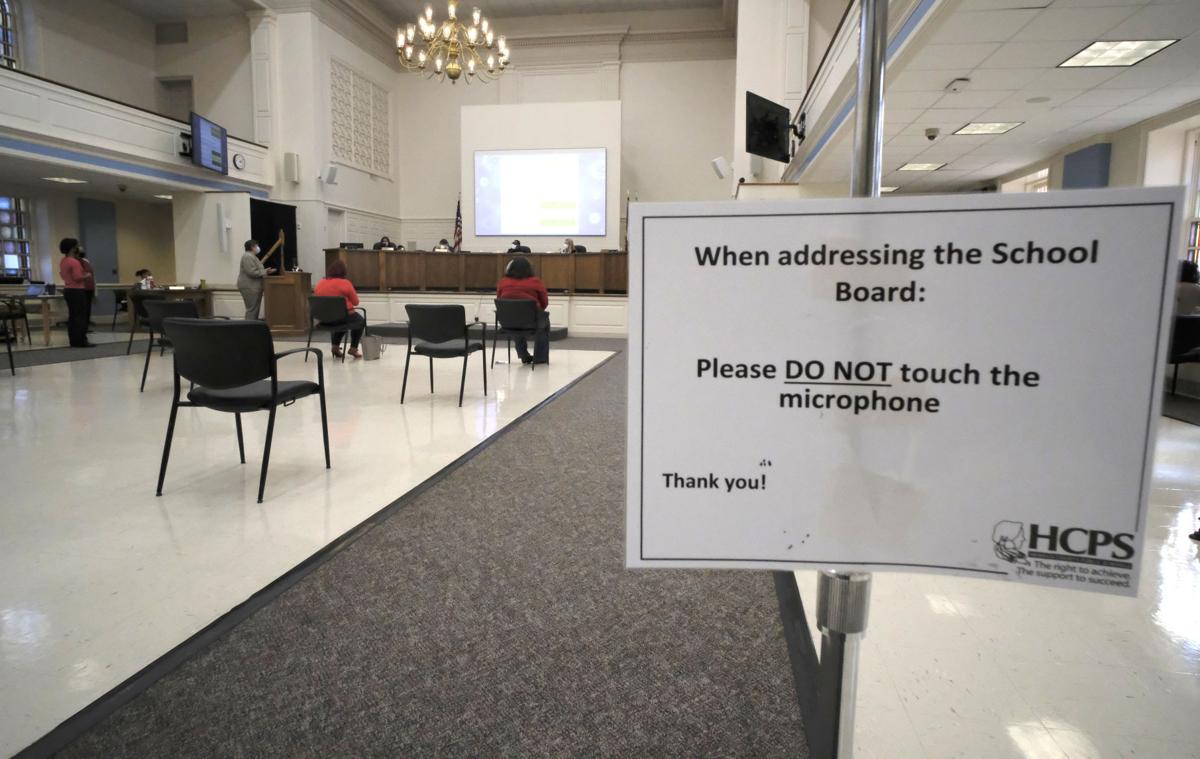 The meeting room of the Henrico School Board ahead of a vote on whether to resume in-person learning, taken in Henrico County, VA Thursday, Oct. 22, 2020. 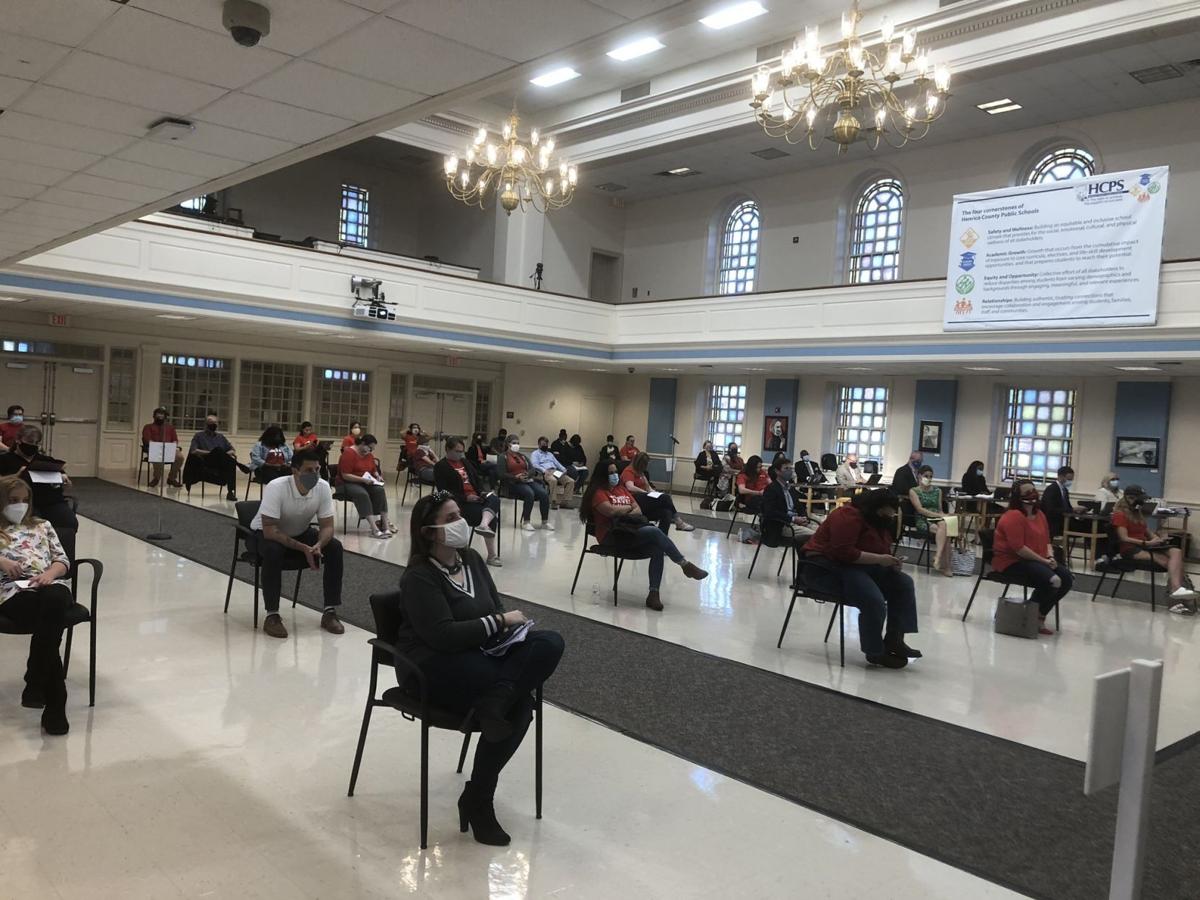 People attending Thursday’s Henrico County School Board meeting waited for a public comment period ahead of the vote to resume in-person learning in phased groups.

Henrico County Public Schools students will be allowed back in classrooms in phased groups beginning Nov. 30, the School Board decided Thursday in a 4-1 vote.

Students who choose to return will attend in-person classes four days a week, with Wednesday being a virtual day. A fully virtual option will remain available to students.

Elementary students will be the first ones back in the building the week after Thanksgiving, a decision that board member Kristi Kinsella said she simply couldn’t support since it’s right after a holiday for which many families travel, which could increase the spread of COVID-19.

Kinsella tried to delay an in-person return, which the schools’ Health Committee recommended; the proposal was batted down by her colleagues.

Secondary students won’t go back until February, and there will be a virtual week from Jan. 4-8 in hopes of mitigating spread of the potentially lethal virus following Christmas travel.

“We’re spiking in 41 states,” Kinsella said. “In six to 12 weeks, the pandemic is scheduled to increase significantly. My primary concern, as it was in July, continues to be the safety of our students, families, teachers and staff.”

Audrina Faurer, a county elementary school teacher, said she doesn’t feel that she necessarily has a choice if she is told she must come back in person.

“It would have been nice to have the buffer of coming back after the holidays. I’m very concerned about Thanksgiving,” she said. “I don’t have a choice. I have to go back. I have no option. I’m going to try to make the best of it, but I don’t have the option to just leave my job.”

Henrico schools chief of staff Beth Teigen, who oversaw the Health Committee formed in July, said the group determined on Monday it would recommend a phased in-person return.

Division leaders then zeroed in on a model calling for four days of in-person instruction, with Wednesdays as a cleaning day.

The decision comes after teachers repeatedly expressed concerns at meetings and listening sessions about moving away from the virtual model endorsed by the board in July. At the time, the decision was welcomed by many. Now, some parents are reporting their kids are experiencing anxiety and struggling to learn.

The day of the recommendation, the county was in a higher risk for transmission given the number of new cases per 100,000 cases.

However, Dr. Melissa Viray of the Virginia Department of Health told the board there hasn’t been a “surge.”

“I know in other parts of the country, they’re seeing legitimate surges, but that’s not what we’re seeing here,” Viray said. “What we’re seeing in the Richmond region, I wouldn’t say is a surge. We might be going in the wrong direction.”

“I am no longer feeling optimistic,” she said. Burgess has previously said she would consider resigning if she was forced to go back to a classroom, something about 9% of HCPS staff said they would consider, according to a survey.

Dr. Danny Avula, director of the Richmond and Henrico Health Districts, was not present at the meeting but served on the committee. He has maintained that it’s important for students to be in school for social and emotional health.

Superintendent Amy Cashwell said she often hears from families that are struggling with virtual learning, and said there could be benefits to bringing students back.

“We hear from many families who are experiencing significant difficulties with the challenges that virtual learning brings. Not just on the academic level, but on the social emotional learning as well,” she said. “While we recognize that the virtual school day doesn’t look like the traditional day ... there may be some benefits of that in-person experience for those who need it. We know there are students who need that in-person support.”

For people who support a new George Wythe High School sooner than later, the Richmond School Board picked an inopportune time to flex its musc…

'We do have a playbook this year': 93.5% of Hanover parents want their kids back to school this fall

Art and music classes led by real teachers, trips to the cafeteria and the library — these are just some of the ways Hanover County schools ar…

Randolph-Macon joins 300 other universities that say they will require COVID vaccines.

Richmond region school systems celebrate their teachers of the year

It was a school year like no other. An unprecedented pandemic changed everything about education for the 2020-21 school year — everything, tha…

The cost of tuition at VCU, about $15,000 for in-state students, won't increase for a third consecutive year.

With Wednesday’s approval of the Pfizer vaccine for children 12 and up, Hanover County school and health officials are partnering to provide v…

The meeting room of the Henrico School Board ahead of a vote on whether to resume in-person learning, taken in Henrico County, VA Thursday, Oct. 22, 2020.

People attending Thursday’s Henrico County School Board meeting waited for a public comment period ahead of the vote to resume in-person learning in phased groups.