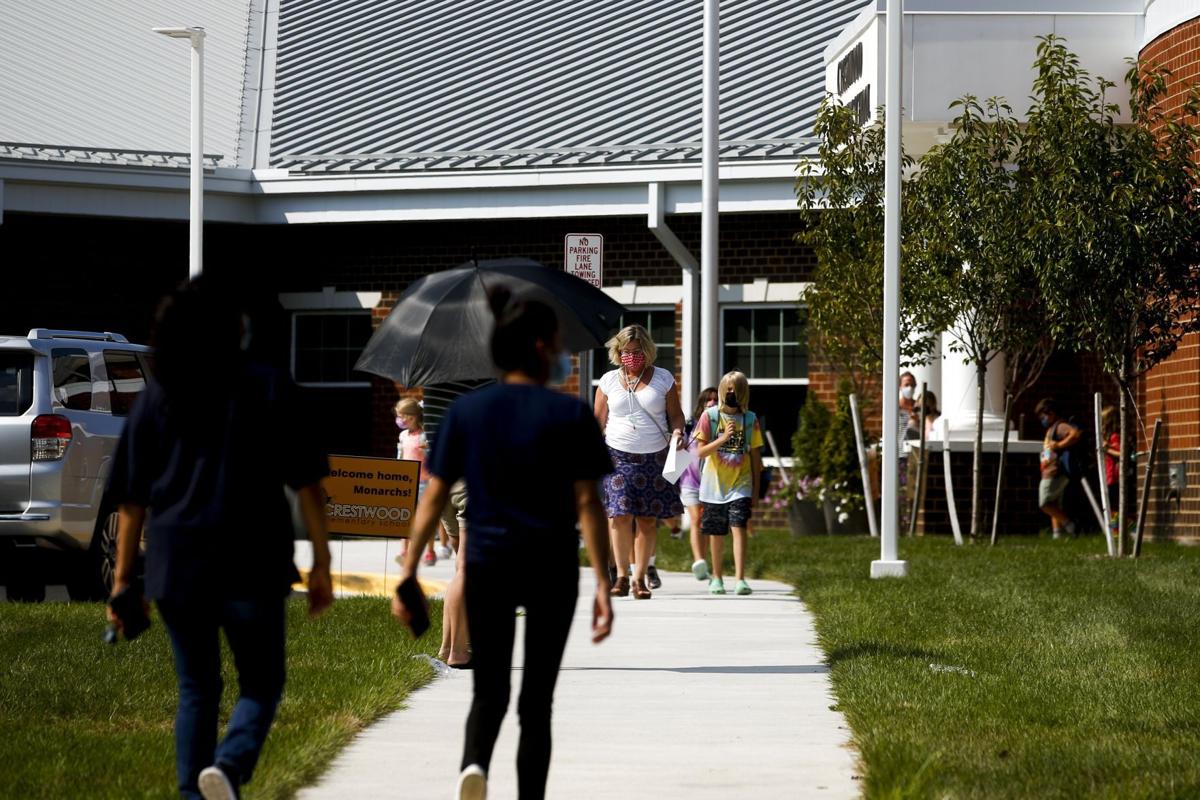 Parents picked up children at Crestwood Elementary School in Chesterfield County during the district’s first week of school late last month. While the state has mandated masks in all school settings, Chesterfield is not requiring teachers to have vaccines. 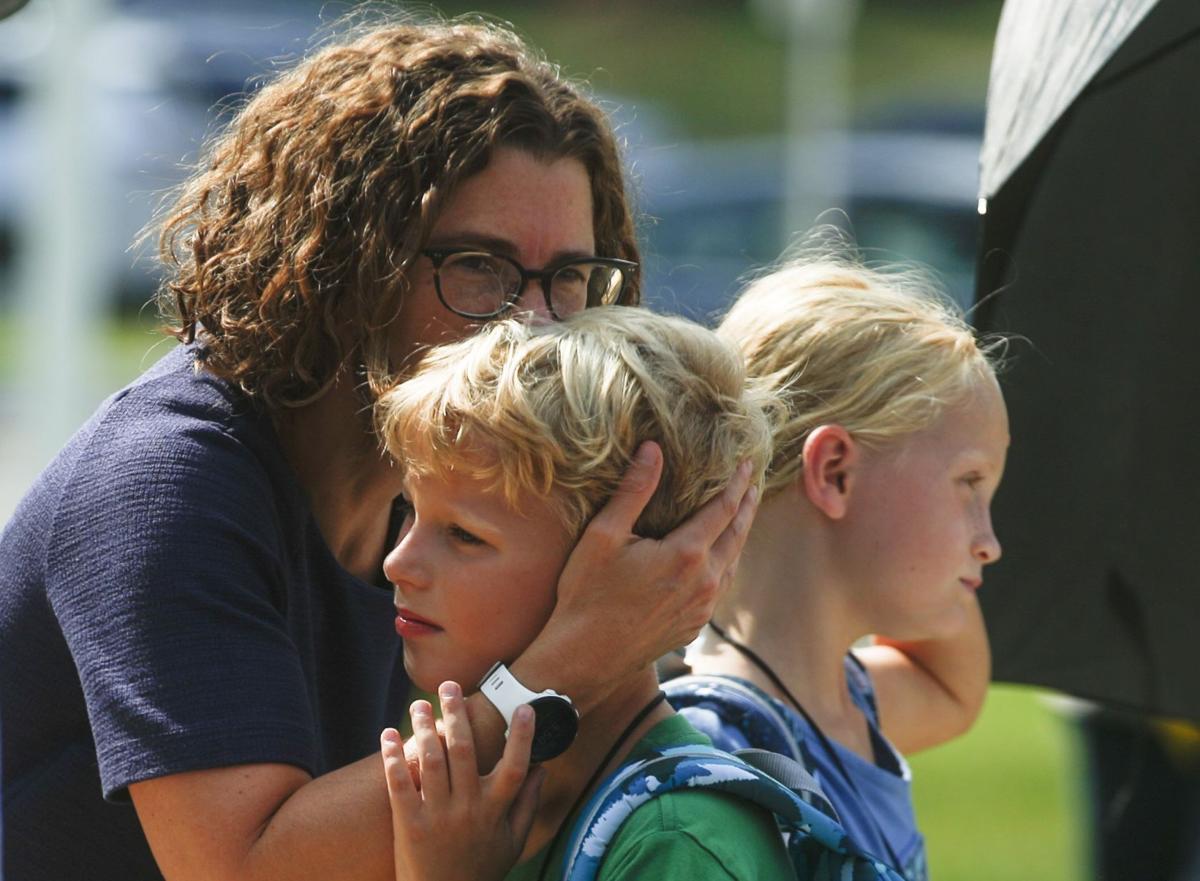 Shannon Cribbs kisses her son, Spencer, 7, after picking him up on Thursday, August 26, 2021 at Crestwood Elementary in Chesterfield, Virginia. 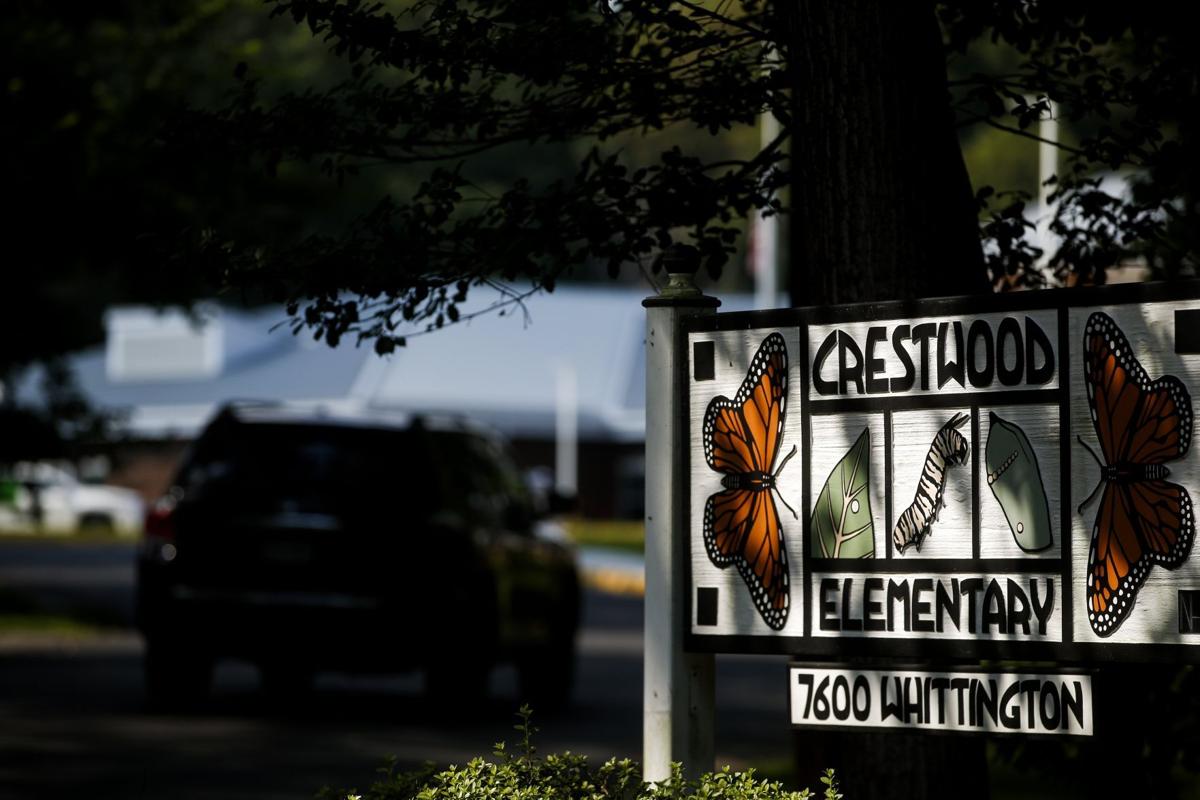 Parents arrive to pick up their children on Thursday, August 26, 2021 at Crestwood Elementary in Chesterfield, Virginia.

After nearly a year and a half of a chaotic virtual school year, Virginia school districts will open fully for the first time since March 2020 after shutting their doors to prevent the spread of COVID-19.

On March 13, 2020, cities across Virginia closed schools in fear of the novel coronavirus. The expectation was to be closed for two weeks. Then, as cases of the then, very unknown virus, shot upward, Gov. Ralph Northam cancelled school in Virginia for the rest of the year, leaving school districts, parents, and students wondering how they would continue their studies. Some districts were eager to open — Hanover County Public Schools was the largest locality in the state to have a five-day-a-week school year last fall. Henrico and Chesterfield counties opened their doors later in the year, but Richmond Public Schools hesitated to fully open its doors with COVID-19.

Now, after state intervention, all Virginia school districts are required to reopen for full time in-person instruction. But as the pandemic has also had a political moment, all four districts in the Richmond area have largely differed on how they want to proceed, but have some similarities.

The consequences of closing schools were bitter and heartbreaking, the data shows. Young learners were less reading proficient than when schools were open, the data from the Phonological Awareness Literacy Screening shows.

The number of kindergartners and first-graders in need of early reading intervention shot up 10% year over year. It was even worse for Black, Latino and English language learners. Black early learners saw an 8.8% increase in students identified for reading intervention and nearly half of Latino early learners were identified. The first data from the Standards of Learning state standardized test also shows that there was less participation, but still significant damage from a lack of in-person learning across the state.

Here’s how the Richmond-area school districts are handling reopening.

Dr. Norm Oliver, the state’s health commissioner, mandated masks for all K-12 settings in an order issued in August. The state has not required vaccines for teachers, leaving that decision up for local school boards.

In the metro area, Richmond Public Schools is the only locality to mandate a COVID-19 vaccine for all staff and other adults in the building, including community partners and contractors. All adults who work closely with RPS must submit proof of vaccination by Oct. 1 or face possible termination, Superintendent Jason Kamras said. The district required masks universally long before the state mandated it in schools.

In Henrico, the county flipped on mask wearing mandates within a week’s time, ultimately requiring them on the day the state stepped in.

The Henrico Health Committee, which leads decision-making for COVID-19 mitigation strategies, is not planning a COVID-19 vaccine mandate.

Chesterfield and Hanover have both experienced political fallout over mask mandates. The two districts saw protests against universal mask mandates. Before the state decision on masks, Chesterfield voted unanimously to mandate masks.

Hanover County’s School Board, however, ignored Superintendent Michael Gill’s recommendation to institute universal mask wearing for elementary school children, who are not yet eligible for COVID-19 vaccines, while masks would be optional for middle and high schoolers. Instead, the board voted to make mask wearing a parental choice. Now the district is complying with the state mandate.

While masks are required for all students, staff, and visitors in Chesterfield schools, a mask exemption is available for students. If a student cannot wear a mask, a face shield would be allowed. If the student can’t wear a face shield, a desk shield will be used, according to the district’s mask exemption procedures.

If a parent or student refuses the face or desk shield, they will be referred to administration. A spokesperson did not respond to questions about the number of students who have applied for and received a mask exemption.

With the spread of the delta variant and the rise of COVID-19 cases in schools, all four localities have reported a jump in requests from families to participate in virtual schooling.

In Richmond, there are 2,000 slots available for the Richmond Virtual Academy, but the district isn’t reopening the list. Kamras has said there aren’t enough staff members to support any additional students, but he encourages parents to either withdraw their students to homeschool them, or enroll them in the Virginia Virtual Academy. A district spokesperson said that while there’s been an increased interest in withdrawing students for homeschooling, the actual number of students withdrawing for homeschool is low.

Henrico will host its own virtual academy, but it has an extensive waiting list. There are around 2,400 people on a waiting list for virtual school in Henrico between the Henrico Virtual Academy and Virtual Virginia, which is down from nearly 3,000 in late August.

Two weeks ago, Chesterfield opened its doors to roughly 62,000 students. There are over 1,800 students enrolled in the K-8 Virtual Learning Academy and 1,600 in the online course program, CCPSOnline, according to a schools spokesperson. For both virtual options, there are roughly 400 students looking to enroll and leave in-person instruction.

Parents who wish to switch their child to Hanover County’s online school will have their request added to the waiting list. The deadline for students to sign up for virtual learning was June 18. Students will be pulled from that list on a first-come, first-served basis when seats are available.

Quarantines and the reporting of cases

Chesterfield, Henrico, and Hanover all have dashboards for COVID-19 reporting. In Richmond, the superintendent reports COVID-19 cases daily in his newsletter.

RPS’ website says classes will be quarantined if advised to do so by the Richmond City Health District, and that if students are considered in close contact with someone who is positive, they should quarantine at home. RPS defines a close contact as someone who has been within 6 feet of a COVID-19-positive person for 15 minutes over a 24-hour period. If a close contact is vaccinated or has tested positive for COVID-19 in the past three months, they don’t have to quarantine.

As the Chesterfield school district closed its second week of school Friday, there were 286 cases among staff and students as of 11 a.m. Friday’s reported cases were between Aug. 23 and Thursday. The district has a daily dashboard that without naming the infected student or staff member, informs the community when there is a case.

Students who tests positive cannot return to Chesterfield schools until 10 days have passed since they first showed symptoms, their symptoms have improved and they are fever-free for 24 hours without medication.

After COVID-19 cases are reported to school nurses, case investigation and contract tracing begin, according to the district’s Frequently Asked Questions about COVID-19 cases. Close contacts are defined as someone who is within 6 feet of an infected person for 15 minutes or more over a 24-hour period, within two days prior to the onset of the virus or positive test date.

However, in classrooms, the close contact identifiers are not valid: “the close contact definition excludes students who were within 3 to 6 feet of an infected student (laboratory-confirmed or a clinically compatible illness) where both students were engaged in [the] consistent and correct use of well-fitting masks.” The exemption does not apply to any adults in indoor classrooms.

If a teacher, who wears a mask, tests positive and all the students around were wearing a mask at the time of the positive case the contract tracing is within 6 feet. Regardless of masking, contact tracing for buses will remain at 6 feet.

For homes with multiple Chesterfield students, only the exposed child needs to quarantine. However, if the student develops symptoms of the virus then the remaining children must also quarantine.

Henrico schools use four charts to report positive COVID-19 cases among students and staff. The charts are broken down by elementary schools, middle schools, high schools and program centers., and annexes, such as central office and transportation.

Hanover is following the Virginia Department of Health, which says that students who are fully vaccinated do not need to quarantine. If they develop COVID-19 symptoms, however, they must stay home, and according to VDH recommendations, get tested for the virus immediately.

Unvaccinated students who were in contact with a COVID-positive individual must quarantine for 10 days unless symptoms develop, which requires 14 days.

If it’s determined that students must quarantine, parents and guardians will be contacted by a VDH representative to determine the number of days they must be out of school and students under quarantine will switch to virtual learning. VDH will provide a written release for students to return to school and that documentation must be provided to schools before students can resume in-person learning.

This story has been updated to provide more information on how RPS defines a close contact.

'Mama's the one who had tears': Hanover welcomes some students back to school Tuesday

Ebony Mines bent down and gave her daughter, Adaeze, one final squeeze before letting her go. Holding the hand of a South Anna Elementary staf…

Parents picked up children at Crestwood Elementary School in Chesterfield County during the district’s first week of school late last month. While the state has mandated masks in all school settings, Chesterfield is not requiring teachers to have vaccines.

Shannon Cribbs kisses her son, Spencer, 7, after picking him up on Thursday, August 26, 2021 at Crestwood Elementary in Chesterfield, Virginia.

Parents arrive to pick up their children on Thursday, August 26, 2021 at Crestwood Elementary in Chesterfield, Virginia.