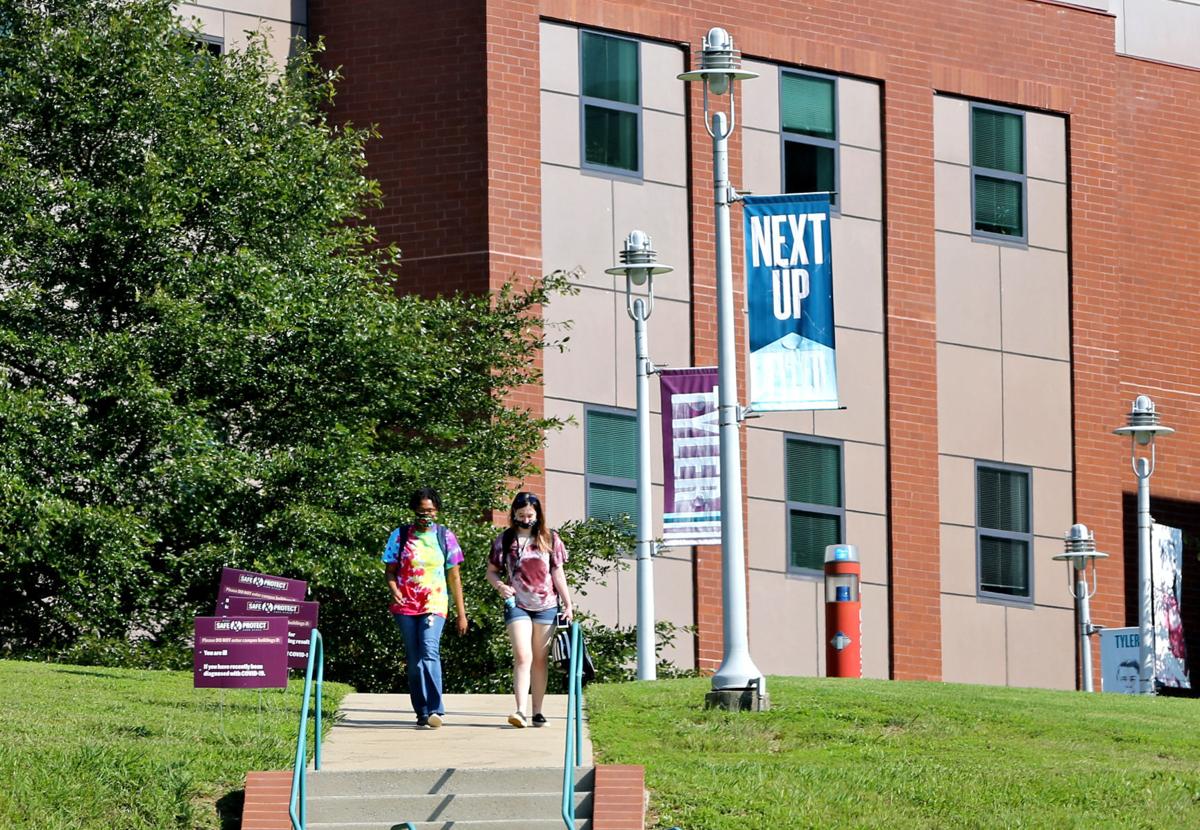 ABOVE: At John Tyler Community College in Chester new student applications have dropped by approximately 1,000 and enrollment is down 11.3%, according to school administrators. 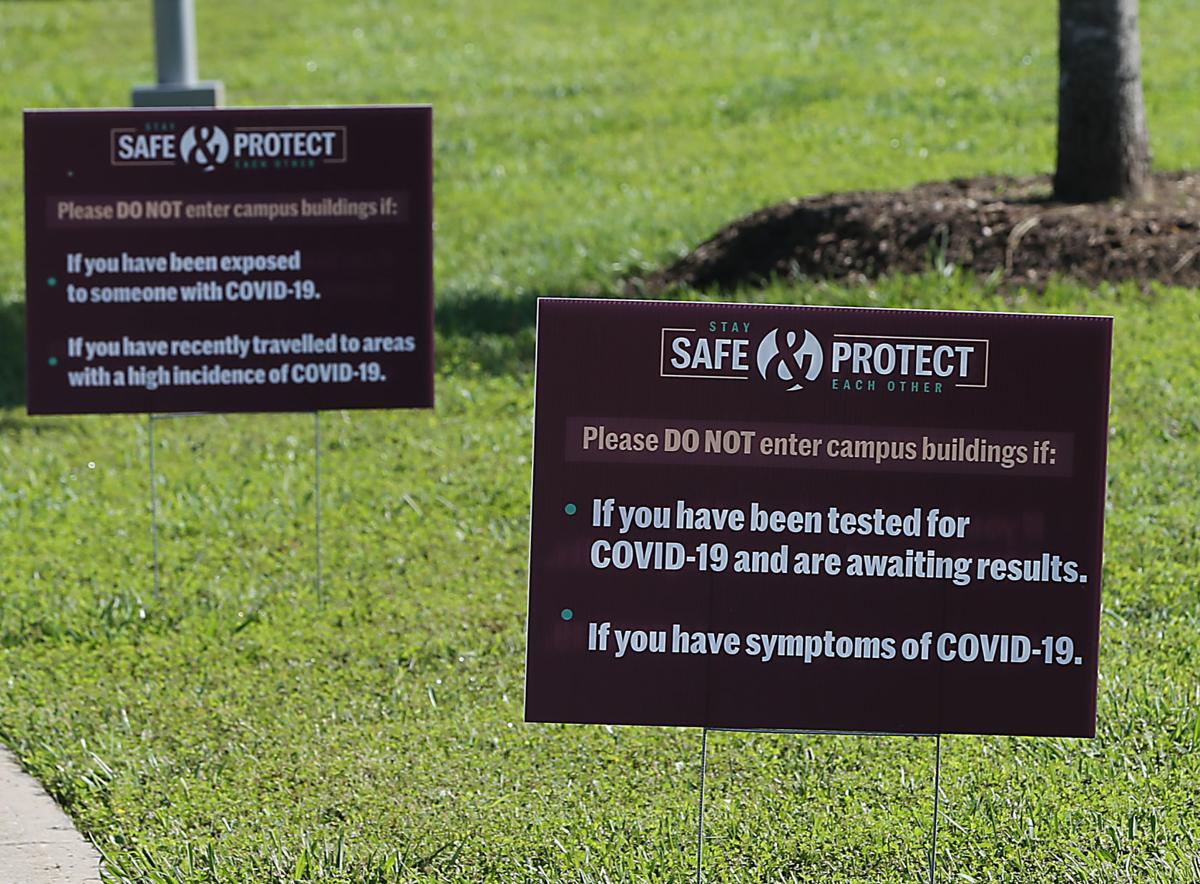 As the COVID-19 pandemic threatened to shut down in-person learning at four-year universities, the area’s community colleges had hoped for a spike in enrollment.

The thought was that students would see the value in taking their online courses through the less expensive two-year colleges instead of paying full price for four-year schools without getting much if any of the so-called college experience.

“We have seen a jump in applications, but those applications have not yet turned into students actually registering,” said. Terricita Sass, vice president for enrollment management and student success at Reynolds. “So we know we had interest. We know students were looking at their options.”

Sass said the Reynolds’ current fall enrollment has seen an 8% dip, but new student enrollment is actually up slightly, at 2.5%, she said.

At John Tyler, new student applications are down by about 1,000, said Bill Fiege, the school’s vice president for learning and student success. Overall, Tyler is down 11.3% in its enrollment this fall as of Monday, though Fiege is hopeful that number will end up in single digits.

“We were thinking students would wait a little later to try to figure out what they wanted to do, how they wanted to manage the process,” said John Tyler’s Fiege. “I wouldn’t say we were expecting to be up, because there’s so much uncertainty with everything going on, but we didn’t expect to be down significantly.”

Community colleges also did not anticipate as many four-year schools opening up for in-person learning as have decided to do so this fall, including the University of Virginia and Virginia Tech. The expectation that many, if not most, four-year colleges would be in virtual learning models this fall fueled national speculation that community college enrollment could soar.

“Community colleges nationwide, that was the hope,” said Sass. “That students would see that value since they were already going to be remaining at home. We did not anticipate that as many colleges would continue to open up their doors as we have seen.”

Schools like Reynolds and Tyler even began aggressively marketing to potential students who might enroll to complete just a few courses, then transfer those credits to another in-state four-year school when the pandemic was behind the country and in-person learning returned.

Still, at both schools, there is time to salvage the fall enrollment numbers.

“We are still optimistic that we will gain some additional students, but this year is unlike any other year and it is very difficult to use any type of trend data to predict,” said Sass. “We’re basically hoping and there’s some speculation. We don’t have any historical data to base this behavior on.”

Reynolds’ campus is currently open but is only offering limited in-person courses, in subjects that require hands-on work — subjects including nursing, emergency services, culinary arts, horticulture and welding. Those have smaller class sizes this fall to allow for social distancing.

Some of those are hybrid courses, combining in-person and virtual learning.

There is a similar set up at Tyler, though Fiege said the school is still offering a limited number of in-person courses in subjects such as English and math, for students who prefer.

Like Reynolds, however, most of Tyler’s classes are online, either synchronous or asynchronous. Fiege said the school’s IT department has added 40 new “Zoom classrooms,” to facilitate online learning.

Both colleges could benefit from adults seeking new job training during the recession. Virginia’s unemployment rate in July was 8%, according to the Virginia Employment commission, five points higher than this time last year.

With more and more people seeking work, the community colleges hope to attract those in need of new training.

“We have employers telling us they have jobs, but they need to have certain skilled individuals to fill those jobs,” said Sass. “Our job is to make sure we’re helping to support this economy. We need to offer classes where there are jobs.”

In the latest ranking of best colleges by U.S. News & World Report, UVA moves up to 26th, and William & Mary ascends to 39th.

Hundreds of JMU students are sick. Thousands have to move home by Monday.

Life as it currently exists on college campuses, with online classes and distancing measures, is expected to continue into the spring 2021 semester.

Life as it currently exists on college campuses, with online classes and distancing measures, is expected to continue into the spring 2021 semester.

College students are socializing in small groups and staying outdoors. At VCU, they're not going to bars much, either.

Limiting screen time used to be a parenting challenge. With virtual learning, it's impossible. Here's what experts say.

Parents are now dealing with virtual education, but that means its even more critical that they prioritize social and emotional connections after the school days are over or during the breaks in daily school lessons.

ABOVE: At John Tyler Community College in Chester new student applications have dropped by approximately 1,000 and enrollment is down 11.3%, according to school administrators.