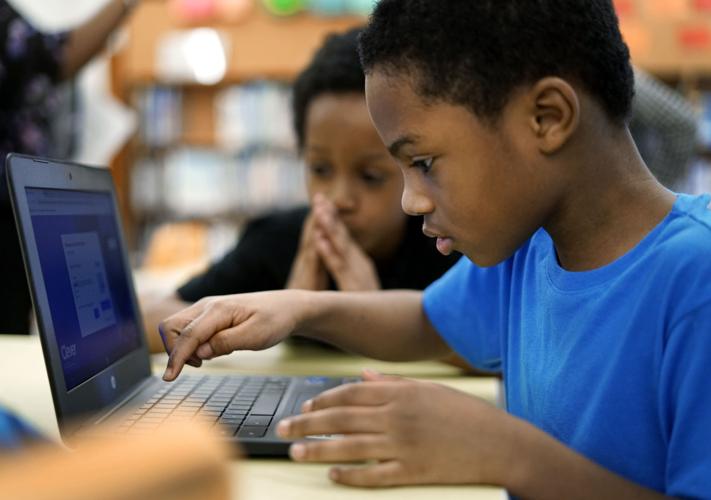 Ajahniah Scott (right) and Donald Banks worked on a new Chromebook in March 2020 at Carver Elementary School in Richmond.

An internal audit of Chromebooks provided to Richmond Public Schools students to facilitate distance learning during the pandemic found that more than 2,000 current students have been assigned multiple devices, while nearly as many students who are no longer active still have devices assigned to them. Meanwhile, more than 20,000 Chromebooks are currently unassigned.

Richmond School Board Chair Shonda Harris-Muhammed wants the board to be able to review all Chromebook laptop purchase orders after an internal audit discovered roughly 20,000 RPS laptops are sitting idle and about 1,750 former students are still in possession of a Chromebook.

“This [situation] is categorized right now in the public as fraud and waste, and I have a problem with that,” Harris-Muhammed said during Monday’s School Board meeting. “There is a train and a line of accountability that has been lost. It is our job to govern that, and it will be governed.”

Going forward, the School Board will work collaboratively with the administration concerning Chromebooks, she said. The board’s policy committee may create policies to correct the wrongs found in the audit. Harris-Muhammed thanked Superintendent Jason Kamras’ administration for producing the audit.

When RPS closed schools in March 2020 because of the coronavirus pandemic, the division decided to distribute Chromebooks to all students for virtual learning. Thanks to federal funding, the school system purchased enough laptops, plus extras, to ensure each student would have one.

The recent audit found that some current and former students have multiple laptops and that the district ordered an extensive number of extra devices. Harris-Muhammed said Monday night that there is “a serious problem with our internal controls.”

In October, 4th District School Board member Jonathan Young proposed a motion to launch an audit into the division’s Chromebook distribution process. The audit stemmed from the possibility that between 7,000 and 9,000 Chromebooks assigned to students were missing.

Audit findings by the numbers:

Young, during Monday’s School Board meeting, made a motion to direct the superintendent’s administration to — in every extent possible — contact former students in possession of Chromebooks to return them.

“It is the responsibility of this board, our fiduciary responsibility, to safeguard all of our assets,” Young said. “Of course, our Chromebooks are but one of many.”

He added: “I think it’s incumbent on us as a board to make every good faith effort to retrieve those Chromebooks recognizing that the likelihood is a significant percentage relevant to [student] attrition.”

Milton Parker, RPS senior internal auditor, said Monday that when students are leaving RPS, they are either not being asked to return their laptops or RPS staff is not actively retrieving the laptops.

“We never track down the Chromebooks for the most part,” Parker said.

RPS uses Tempest, an asset management software, to account for its Chromebook inventory. According to the software, 10,000 current students do not have a laptop. When visiting schools, Parker noted that some teachers were using internal inventory sheets instead of Tempest, meaning those laptops are not officially accounted for.

“I just want to be clear for the record that Tempest is the source of truth,” Parker said Monday. However, the audit findings state: “Technology Services [the division’s technology department] acknowledges that the Tempest system has many shortcomings and a more robust system may be needed for our entire computer inventory.”

Some School Board members asked for a confirmation if there are in fact 20,000 laptops not in use. At this time, Parker said, the division is basing all of its numbers off of Tempest data.

Technology Services is leaning toward assigning laptops directly to students instead of assigning the devices to schools. The department feels this change “will have an immediate impact to alleviate many of the record keeping challenges,” according to the audit.

The technology department is creating a new reporting system so that records are routinely kept concerning new and active students who are not assigned a laptop, active students assigned multiple devices and an inventory of unassigned devices. Technology Services is slated to finalize the reports on June 20.

Kamras said in a statement that he is “grateful” for the Chromebook audit, which he said “illuminated the need for better technology management systems.”

Kamras said that as the pandemic began “our primary goal was to distribute Chromebooks to every student as fast as possible. Although we succeeded in that, it’s clear there were some record keeping missteps. I own that and appreciate the auditor’s work to help us chart a more rigorous path forward.”

Increased competition from colleges in other states, the drop in community college enrollment and the cost of tuition are all factors in VCU's enrollment.

The model policies are slated for a 30-day public comment period beginning on Sep. 26 before they take effect — but could face legal challenges.

The university also apologized for the systemic grave robbing of Black bodies in the 1800s, which were used as medical cadavers, discovered in a well and then built over.

The suit asserts that hearing officers rarely side with parents who challenge school plans for how to educate their children.

VCU settles with family of Adam Oakes, who died in hazing incident, for $995,000

The agreement includes a number of commitments from VCU to reform its approach to overseeing fraternities and sororities.

VUU apparently violated a contract it made with the state that prohibits signs from being displayed on the tower.

Virginia Tech placed 62nd among all colleges in the U.S. UVa moved up one spot in the ranking of public schools to third.

Ajahniah Scott (right) and Donald Banks worked on a new Chromebook in March 2020 at Carver Elementary School in Richmond.

An internal audit of Chromebooks provided to Richmond Public Schools students to facilitate distance learning during the pandemic found that more than 2,000 current students have been assigned multiple devices, while nearly as many students who are no longer active still have devices assigned to them. Meanwhile, more than 20,000 Chromebooks are currently unassigned.