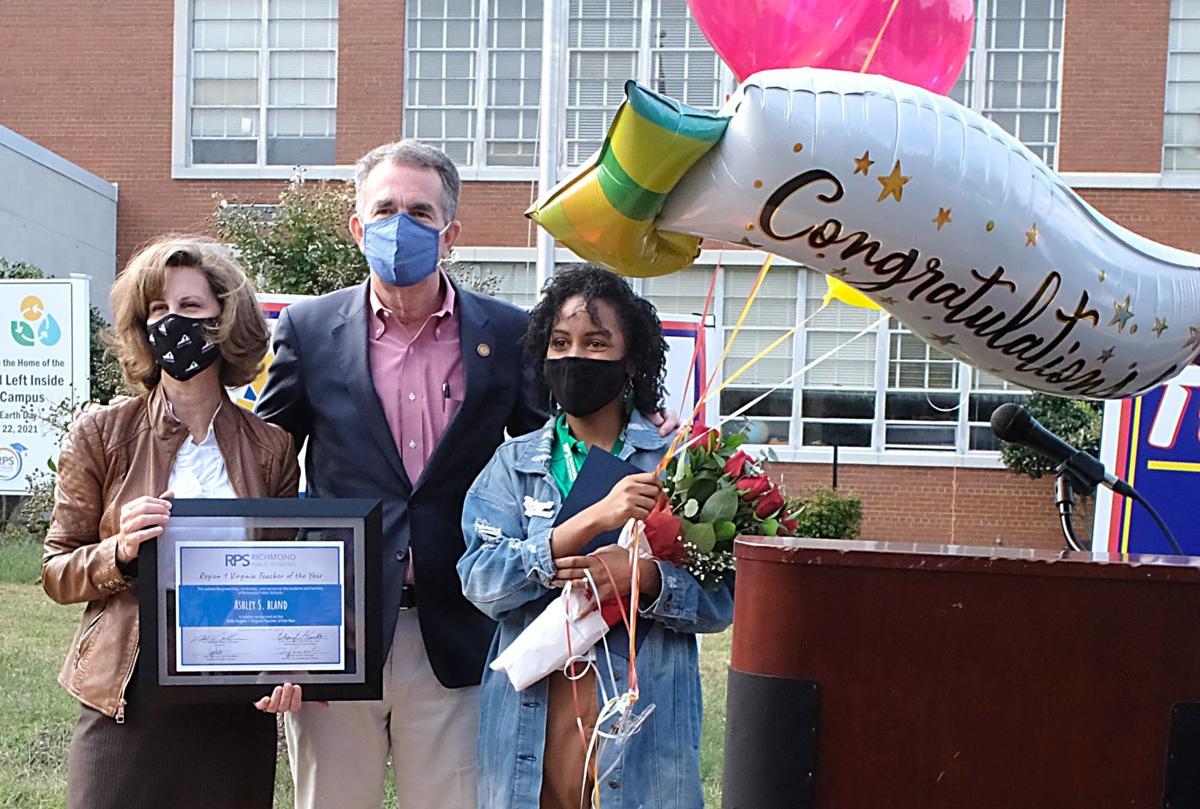 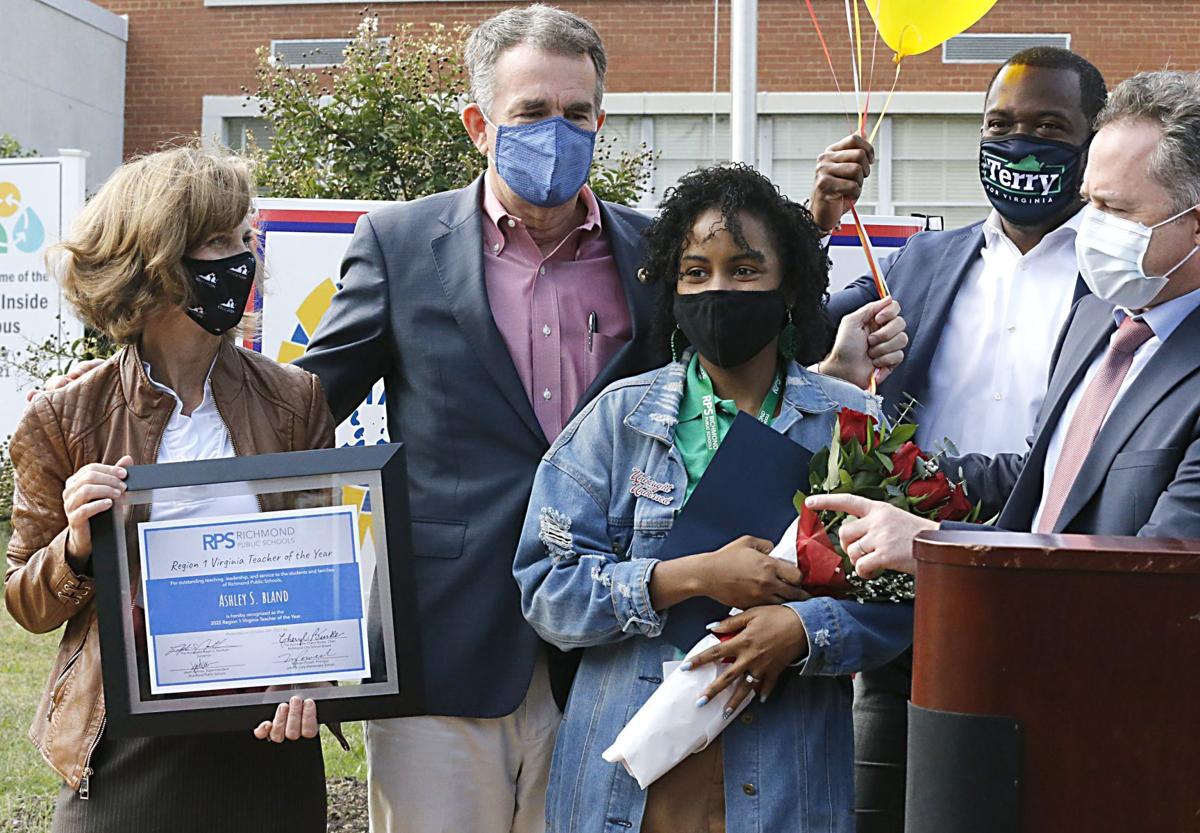 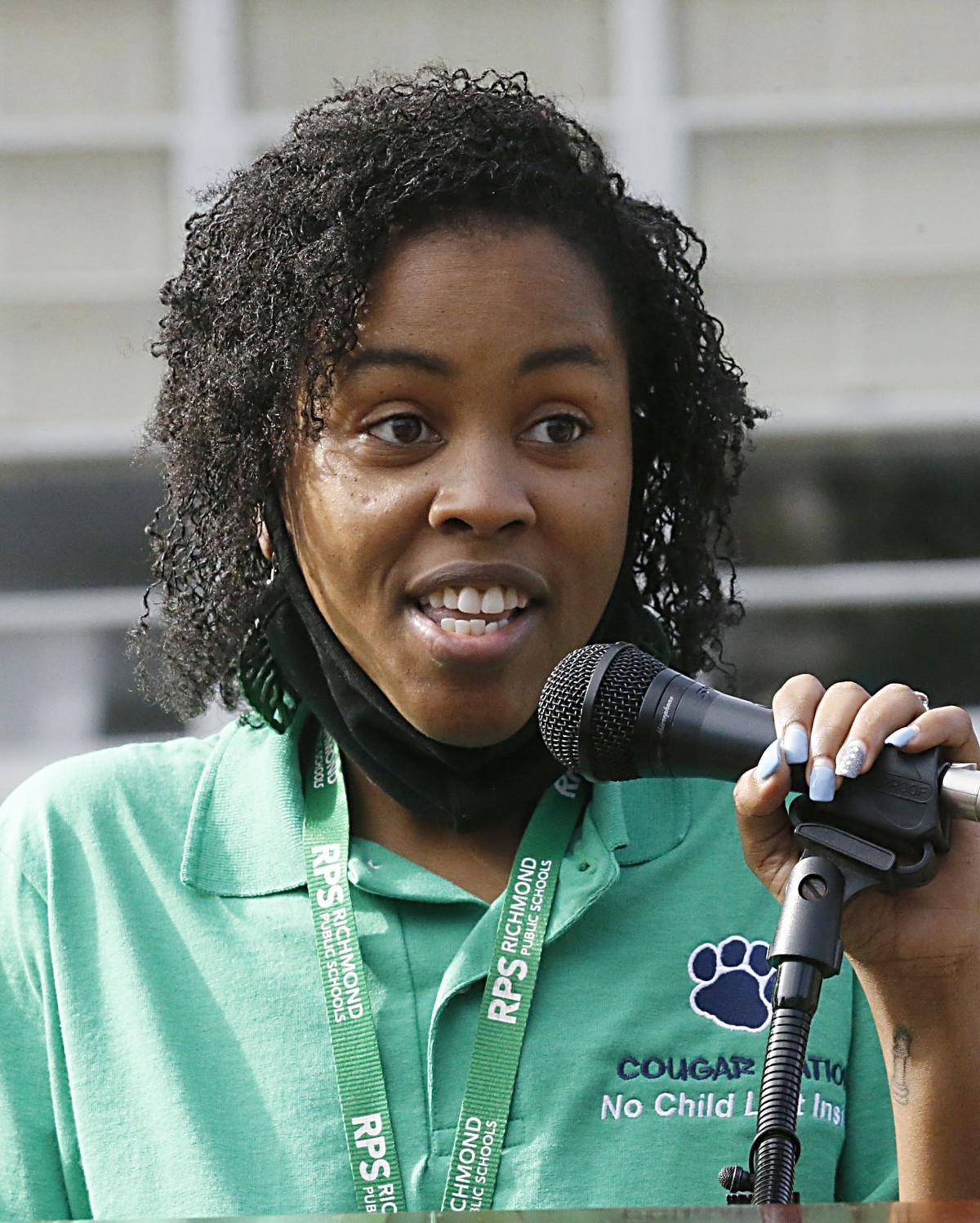 Bland spoke during the ceremony at John B. Cary Elementary in Richmond.

Richmond Public Schools teacher Ashley S. Bland came to John B. Cary Elementary on Monday morning prepared to give a tour of the Eco Campus to local and state elected officials and school staff.

It was an elaborate ruse.

After giving opening remarks and listening to Gov. Ralph Northam tout the importance of science, technology, engineering and mathematics in education, Bland was summoned back to the lectern.

Bland’s mouth dropped from behind her mask as Northam announced that she is the Region I Teacher of the Year. Balloons, a bouquet of roses, and a certificate were placed into her arms.

Monday’s surprise announcement was a bit of déjà vu for Bland, who, back in May, was named RPS Teacher of the Year.

“Oh, my God, you’ve got to stop surprising me like this,” Bland said moments after Northam announced her honor.

Bland is an instructional technology resource teacher in her seventh year with RPS. She splits her time between three RPS schools: Cary, Mary Scott Preschool and Binford Middle School.

“I think this is ... just not a win for myself personally, but for Richmond Public Schools, and putting great things on the map for what our division is doing,” Bland said.

Bland, who received an undergraduate degree in biomedical engineering and physics from Virginia Commonwealth University, never saw herself in a classroom teaching students.

But after working with middle and high schoolers in the Richmond area to encourage them to go into STEM, Bland was encouraged to join RTR, previously known as the Richmond Teacher Residency graduate program, at Virginia Commonwealth University. In 2016, Bland graduated with a master’s in education from VCU.

“My background is actually in engineering and physics, but I like to think about engineering as just a mindset,” Bland said. “So, that can transition to anything that you do, and it’s been amazing, just being an educator and just to know that I could make that transition and anybody can, to be the best that I can to serve students and maybe inspire them to pursue some of the STEM fields.”

Bland hopes to inspire the next generation of STEM leaders, educators and scholars to know that they can do anything.

“The most special thing about Ashley is she embodies our motto ‘Teach with Love.’ Her leadership in STEM and as a woman of color is so powerful in RPS,” said Superintendent Jason Kamras. He joined in on Bland’s surprise Monday, along with John B. Cary Elementary Principal Michael Powell, School Board Chair Cheryl Burke, Mayor Levar Stoney, Del. Betsy Carr and first lady Pam Northam.

Burke was not surprised by Bland’s recognition.

“Wow. Ashley S. Bland. Remember that name because, Ashley, the best is yet to come,” Burke said. “I’m not surprised at all, because you are a stellar teacher, you are an engineer, you are one that is passionate. You are one that chose to be a teacher because you had choices, but just think about the thousands of children who you will lead along the way that just see you, also as an African American female.”

Bland, with the other seven regional teachers who were also announced on Monday, will sit for a panel interview on Oct. 14, according to a Virginia Department of Education news release.

Northam is scheduled to announce the 2022 Virginia Teacher of the Year that same day.

The UR professor and students are conducting first-of-its-kind research on Richmond's rat population, the zoonotic diseases they carry and the risk humans face.

Bland spoke during the ceremony at John B. Cary Elementary in Richmond.