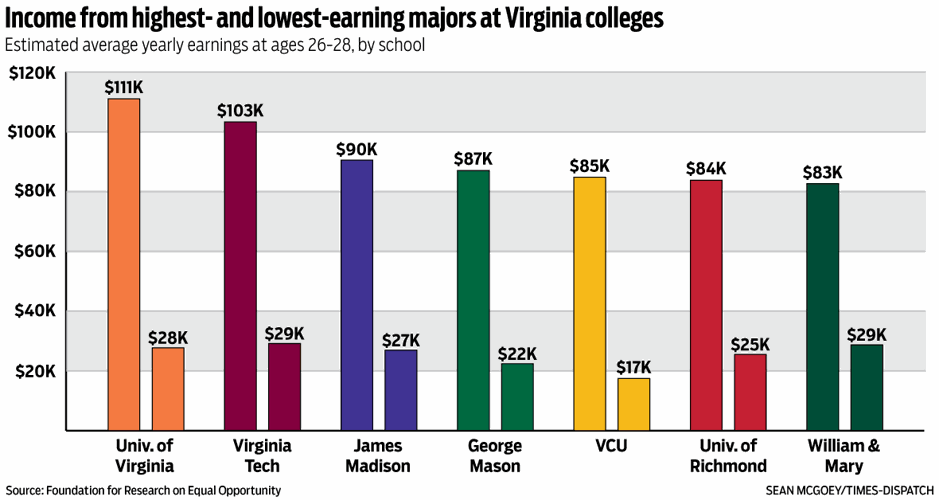 Which undergraduate major you choose at Virginia colleges and universities can have tens of thousands of dollars' worth of impact on your early-career earnings, according to a study by the nonprofit Foundation for Research on Equal Opportunity. The study, which estimates the return on investment of bachelor's degree programs by school, finds that at VCU, electrical engineering students can make nearly $70,000 more per year than philosophy majors.

UVA computer science grads earn $110,000 on average five years after graduation. Joshua Sahaya Arul, who got hired by Capital One before graduation, earned even more. He recently took a position with Google.

The analysis, which estimated the earnings for 750 school-specific majors in Virginia, found that VCU philosophy majors earned the least in the state. Other programs at the bottom include Regent University’s drama department and Mary Baldwin’s arts program.

Together, the data indicates that whether college provides a positive financial return on investment depends mostly on the field of study and somewhat on the college the student attended.

Colleges in Virginia have long debated how to weigh the intrinsic value of certain majors versus their pecuniary value. At a time when tuition costs are rising, student debt remains high and jobs are unfilled, many students in the state are choosing majors that are more likely to provide a good paycheck.

Peter Blake, the head of the State Council of Higher Education for Virginia, said colleges have a responsibility to make sure programs are aligned to meet employment demands as closely as possible, especially now.

A program’s return on investment, he said, is “particularly important.”

The study, which estimates earnings for bachelor’s degree programs nationwide, was published last fall by the Foundation for Research on Equal Opportunity, a think tank described as right-of-center.

Researchers used 2017 and 2018 earnings reported to the College Scorecard, a government database that compiles wage values shortly after graduation, and Census Bureau data to project future income. The study does not address students with graduate and professional degrees.

Some majors never provide a financial return on investment. Those students would have earned more money across their lifetimes had they saved the $100,000 or so in tuition costs, started earning a paycheck four years earlier and begun climbing the wage ladder sooner.

Nearly one in four college majors in Virginia fails to provide a lifetime return on investment, according to the study. The majors least likely to provide a financial windfall are psychology, biology, fine arts, drama, English and social work. The schools that house the highest number of negative-ROI majors are Liberty University, VCU, University of Mary Washington and Radford University.

The majors that provide the highest ROI tend to focus on science, technology, engineering, math and business. Several nursing programs are near the top of the list, too.

You don’t have to go to a prestigious school or an expensive school to get a good-paying job. High-earning majors are found at VCU, Old Dominion University and for-profit schools such as ECPI University.

Some perhaps unexpected majors landed in top 100: romance languages at Washington and Lee, politics at UVA and interdisciplinary studies at UVA, indicating that graduates of the most prestigious schools are more likely to earn high-paying jobs even if they are not enrolled in a high-value major.

Though they aren’t rich, philosophy grads earned a wide range of estimated salaries five years after graduation, from $44,000 at the College of William & Mary to $17,000 at VCU.

Donald Smith, department chair for VCU philosophy, said the results do not fit with his analysis of the jobs VCU philosophy graduates earn.

“I was in disbelief,” he said.

In recent years, VCU philosophy grads have become a research analyst at OrthoVirginia, a researcher at the Economic Policy Institute and a senior analyst at Lumber Liquidators. About half of the graduates go to law school or some other postgraduate degree, he estimated.

The median estimated wage for philosophy grads nationwide is $37,000 in this study, which is a lower figure than some other studies cite. For instance, a 2021 New York Fed study on the labor market for recent college graduates found that philosophy graduates have a median wage of $39,000 early in their careers, but that it rises to a mid-career median wage of $62,000.

Because of the specificity of the Foundation for Research on Equal Opportunity report, its sample sizes are small.

“I have no reason for thinking that VCU philosophy majors fare significantly worse with respect to ROI than what these other studies indicate,” Smith said.

Just because a major doesn’t pay well doesn’t mean it has no value, said Blake, head of the State Council of Higher Education. Return on investment is an important measure of a program’s success — average debt for a Virginia college graduate is $30,000. But it’s not the only measure.

Philosophy improves reasoning skills, the ability to be open to criticism and the ability to disagree in a rational manner, Smith added. All of those skills are relevant to any career a student might pursue.

Josh Hartt, 21, graduated from VCU last month after double majoring in political science and philosophy. Philosophy hasn’t helped his job search much, but if he could do college over again, he wouldn’t change a thing.

“It taught me to think in a way most people don’t, and that was worth every single penny,” Hartt said.

Hartt doesn’t have a job yet, but he has enough money saved up to get an apartment in Richmond while he applies. He plans to apply to law school next year.

What’s helped him the most with his career are the job prospects working on political campaigns. He says the teachers and students he met in philosophy classes were some of the best at VCU.

“If you’re interested in philosophy, don’t let job prospects deter you from it,” he added.

Hartt’s sentiments match those of most students, who are largely happy with their decision to attend college. In a poll of 15,000 Virginia college graduates from the past 15 years, 88% reported feeling satisfied or very satisfied with their undergraduate experience.

A majority, 70%, say their time in college prepared them for the workplace. But only 56% said their education was worth the cost.

Ethan Hamilton broke the mold. Days after he graduated from VCU philosophy last year, he got a job offer as an ontology analyst for a consulting firm in Arlington County, building data models for computers and earning about $70,000, far more than the national average.

His employer was interested in applicants who understand logic and rules — exactly what he had learned in philosophy.

Students in the top-paying majors typically earn six-figure salaries by age 27. Of the 25 best-paying degree programs, 17 are engineering or computer science.

Joshua Sahaya Arul, 21, took computer science as a high school class at Thomas Jefferson High School for Science and Technology in Alexandria and got hooked. At UVA, he chose it as his major primarily because he enjoyed the subject.

A summer internship at Capital One turned into a job offer months before he graduated from UVA. By age 21 — he finished college in three years — he was earning close to $110,000, the estimated salary for his major for graduates five to seven years older than he. He recently accepted a job at Google.

According to the study, he and other UVA computer science grads will receive a return on their college education of more than $2 million.

The State Council of Higher Education does not shut down programs that fail to deliver good jobs. Instead, it pays attention to a program’s popularity. If students stop enrolling, the program can get shut down. In essence, the state council lets the market decide.

If majors have high demand, “there must be some value students see in them,” Blake said.

The highest-paying psychology program is at Virginia Military Institute, where graduates earn an estimated $47,000 five years after graduation.

“Everyone has their own price point when it comes to return on investment,” Blake said.

In the survey of college graduates from the past 15 years, about one in three graduates said they went to college for reasons other than preparing for a specific job — either because they felt they were expected to, they wanted a well-rounded education, or they were trying to figure out what they wanted to do.

But not all majors have sustained the popularity of psychology. In 2010, there were 1,500 college students in Virginia studying English. By 2020, that number had cratered by 40%.

VCU has seen that trend with its new students. In the past four years, fewer incoming freshmen have chosen the College of Humanities and Sciences, which is home to such departments as biology, English and philosophy.

The university’s goal, she said, is to make sure students can envision a career — no matter what major they choose.

Do You Ever Wonder How Many Hours You Have to Work To Pay off Tuition Costs?

The price of a college education keeps rising, while minimum wage and the amount of hours in a day don’t. Here’s how many hours a week a stude…

Which undergraduate major you choose at Virginia colleges and universities can have tens of thousands of dollars' worth of impact on your early-career earnings, according to a study by the nonprofit Foundation for Research on Equal Opportunity. The study, which estimates the return on investment of bachelor's degree programs by school, finds that at VCU, electrical engineering students can make nearly $70,000 more per year than philosophy majors. 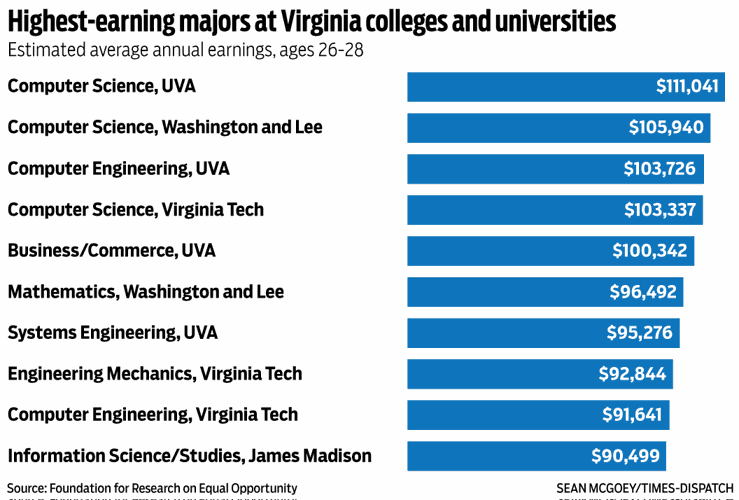 Science, technology, engineering and mathematics (STEM) fields dominate the highest-earning bachelor's degree programs at Virginia colleges and universities, according to a study by the nonprofit Foundation for Research on Equal Opportunity. 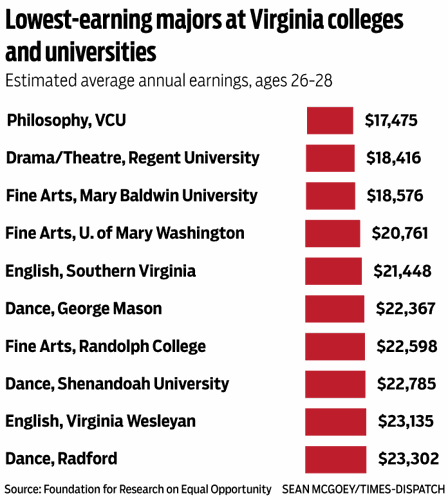 A new study by the nonprofit Foundation for Research on Equal Opportunity estimates that the lowest-earning undergraduate degree programs at Virginia colleges and universities come largely from disciplines like English, fine arts and drama — but that VCU philosophy majors earn less than any other students.

UVA computer science grads earn $110,000 on average five years after graduation. Joshua Sahaya Arul, who got hired by Capital One before graduation, earned even more. He recently took a position with Google. 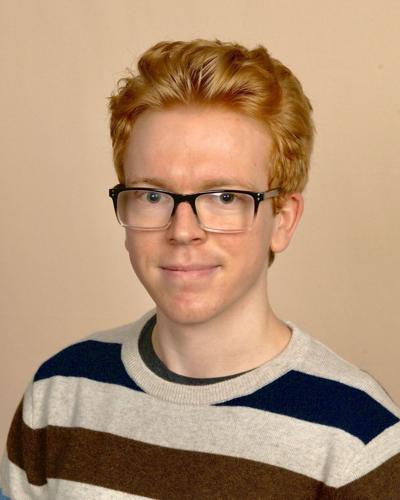 Ethan Hamilton, a VCU philosophy grad, got a job as an ontology analyst and exceeded the average earnings for a graduate his age. 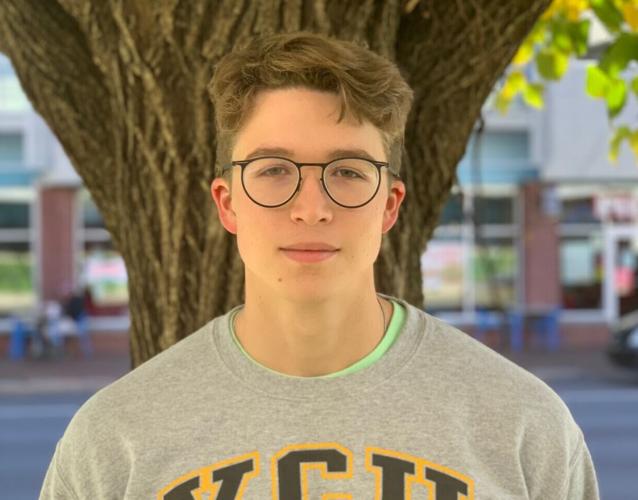 Josh Hartt said his experiences as a VCU philosophy student were worth every penny, even if they don't directly translate to a job.