University of Richmond faculty criticize rector, call for a vote of no confidence
0 Comments
Share this
Eric Kolenich

The fissure between the University of Richmond’s board of trustees and its school community grew wider Friday when the faculty senate issued a letter censuring the school’s rector for his comments during a meeting to discuss the building name controversy embroiling the school.

The senate has called for a no-confidence vote by the entire faculty to be held Friday.

During a discussion regarding the ongoing controversy over two university building names, rector Paul Queally referred to students as Black, Brown and “regular students,” faculty senate representatives alleged. Queally did not immediately respond to a request for comment Saturday.

The comment came, the senate said, on March 26 as faculty and staff representatives met with trustees and president Ronald Crutcher in a white tent on UR’s campus. Outside the tent, a few hundred students and faculty stood in silent protest.

The faculty senate and numerous student organizations have called for the renaming of Ryland Hall, named for Robert Ryland, the first president of the university who also owned slaves, and Mitchell-Freeman Hall, named for John Mitchell Jr. and Douglas Southall Freeman. As editor of The News Leader, Freeman promoted segregation and white supremacy.

“Currently, the university is in turmoil, not simply because of the rector’s actions on March 26, but certainly because of the decisions made by the board he leads,” the senate wrote in a letter. “The only path forward is a reckoning with whether or not the board has fallen out of step with the professed values of the university and the needs and wishes of its students, staff and faculty.”

Thad Williamson, a professor in the school of leadership studies and president of the faculty senate, said in an interview he doesn’t remember if anyone in the meeting immediately took offense to the “regular students” comment or if Queally realized he had upset anyone. The meeting included seven faculty representatives, three staff representatives, four trustees and Crutcher.

Queally was steadfast in his position that the names of the buildings wouldn’t change, Williamson said. That came as a surprise, given that the faculty representatives were invited to have a conversation on the topic.

This isn’t the first time Queally has been criticized for off-putting comments. In 2014, New York Magazine reported that Queally made fun of Hillary Clinton and Barney Frank, a former member of Congress who is openly gay, at a secret Wall Street fraternity induction ceremony. The jokes were seen as sexist and homophobic.

In a statement later, Queally said the remarks were made in the spirit of the event, “but they do not reflect my views or my values.”

A 1986 UR graduate, Queally is general partner and co-president of Welsh, Carson, Anderson & Stowe, a New York private equity firm. He’s given millions of dollars the university, and his name is on three university buildings.

At the meeting March 26, Jessica Washington, a UR adviser in the Bonner Scholars Program who is Black, said she was singled out, interrupted, condescended to and told to “not speak like that to me.” She called the encounter the “single most horrific and traumatizing work experience I have ever had,” in a letter Friday. “From my perspective, white supremacy was on full display in an unabashed manner.”

On Friday she resigned from her position on the university staff advisory council. She said she has heard from other Black staffers who have had similar experiences.

“I can no longer actively work to improve the image and prestige of a university that has demonstrated a complete lack of regard for Black lives and their well-being,” she wrote in a letter.

Crutcher apologized Friday, saying her experience was “inconsistent with our stated values and expectations for our community.” He said the university hasn’t handled the matter of building names as well as it should have.

He said discussions are ongoing, and he asked for the community’s patience as it develops plans.

Seven faculty members who attended the meeting wrote that they were extremely disappointed in the meeting and Queally’s conduct. The letter was signed by Karen Kochel, Stephen Long, Cassandra Marshall, Noah Sachs, Andrew Schoeneman, Peter Smallwood and Williamson.

According to the faculty senate, Queally said changing the names of the buildings would be an act of cancel culture and would fail students in the university’s mission of preparing them for the real world.

Williamson said he’s heard opposition among the school community to changing the two building names. But he’s heard none toward the senate’s criticism of Queally’s comments and behavior. All 17 of the senate’s members support the censure, he said.

When the faculty meets Friday, they’ll be asked to vote on their confidence in Queally as the university’s rector. There are about 470 voting members, Williamson said, and 51% are needed to ratify a vote.

There are no consequences to such a vote, Williamson said. It’s simply an expression of the faculty. He said he understands that to achieve change, the faculty will have to continue working with the board of trustees.

As faculty call for the rector's resignation, UR board of trustees promises fresh start to renaming buildings

The UR board of trustees said it will create a commission to review the names of its campus buildings. Shortly after, the faculty announced it had ratified a vote of no confidence against the school's rector. 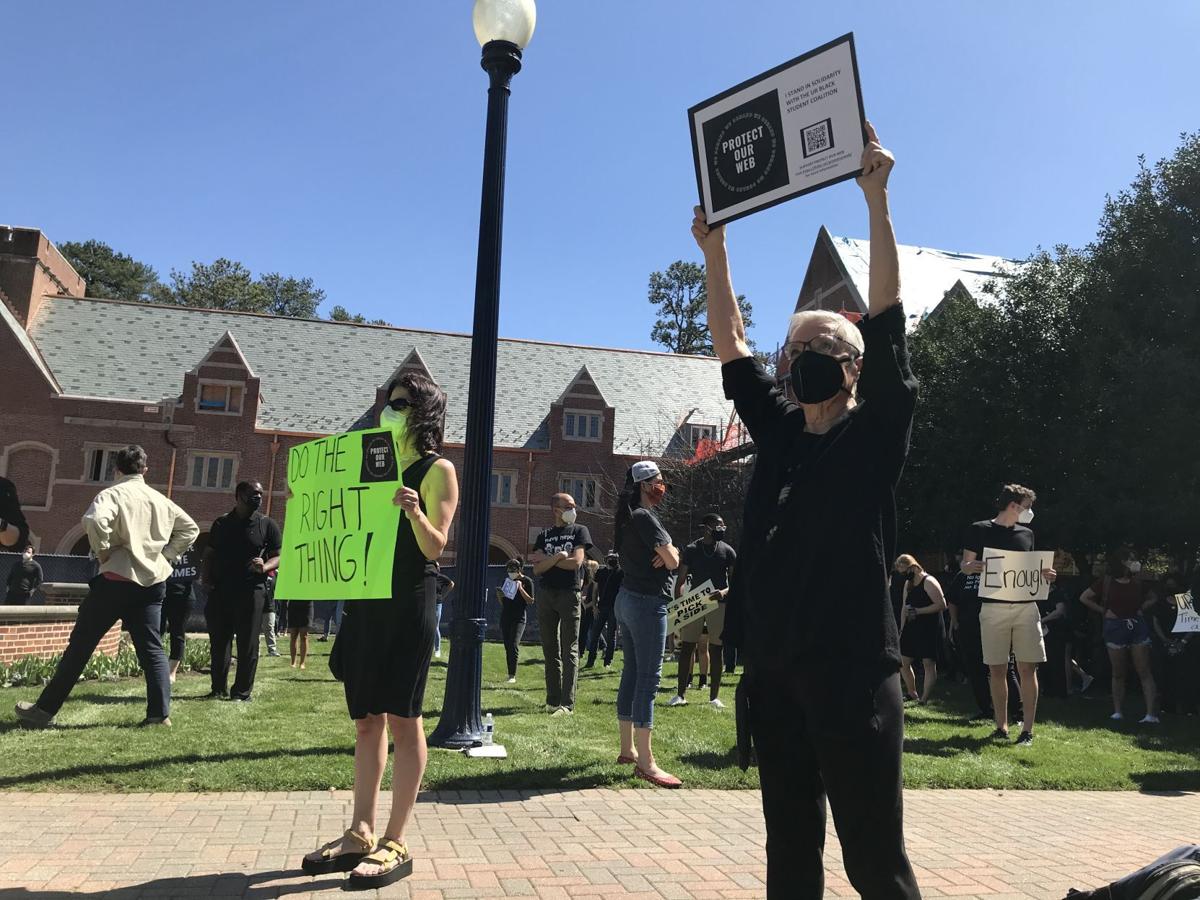 University of Richmond professors Laura Browder (left) and Dorothy Holland held signs during a March 26 silent protest at Ryland Hall, named for the university’s first president — a slave owner. The faculty senate have censured the rector over remarks made Friday. 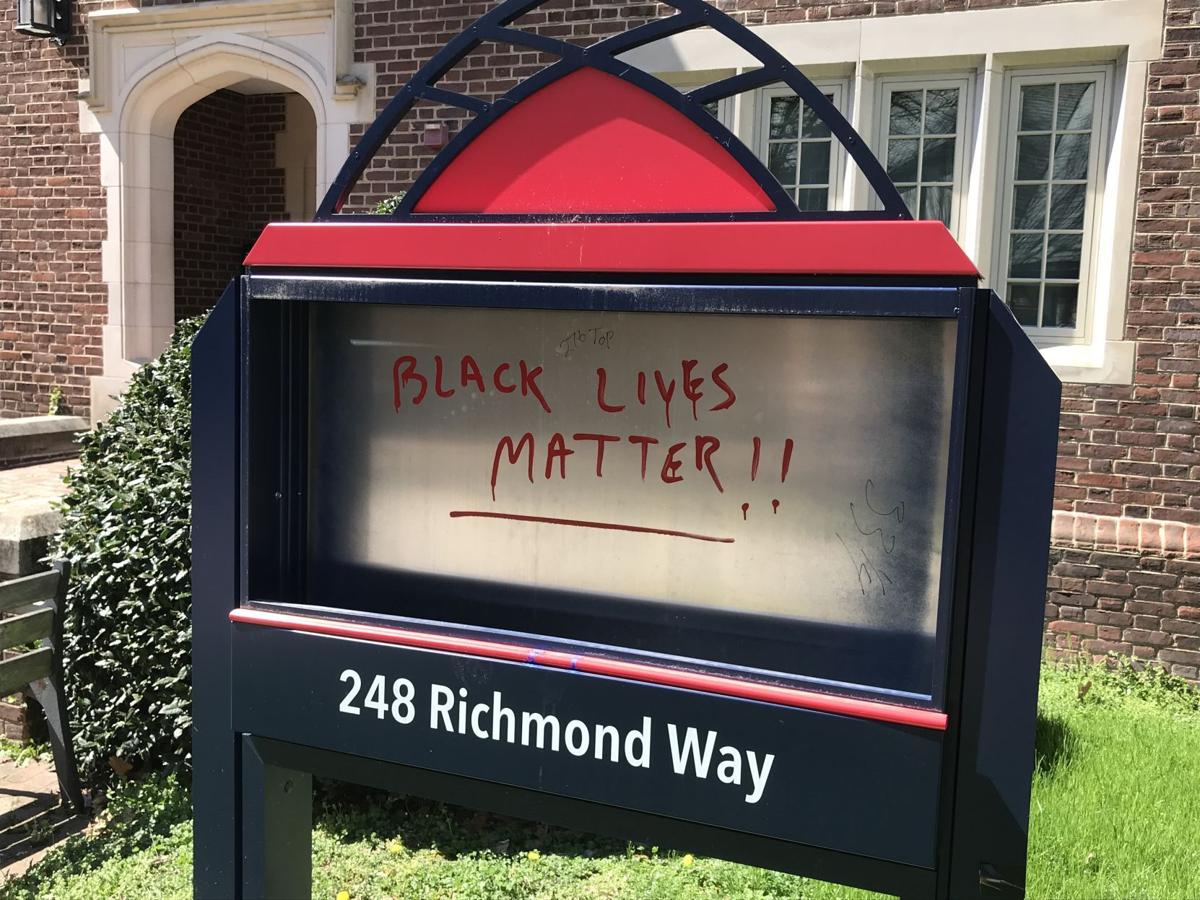