The number of students at Virginia’s community colleges has plummeted by almost 50,000 in the past decade. Historically, community college enrollment increases when the economy dips. But when the pandemic arrived, wreaking havoc on businesses, enrollment kept falling anyway. The head of the State Council of Higher Education for Virginia called it “unprecedented.”

Following a national trend, the number of students has cratered because of rising minimum wage, competition from four-year schools and the ever-increasing cost of higher education. At Virginia’s 23 community colleges, the student headcount has decreased 25% in the past 10 years.

Experts worry about jobs going unfilled and the workforce earning lower wages because of the decline. The drop even led to a tussle between the governor and the State Board for Community Colleges regarding the hiring of its next chancellor.

But a new scholarship that makes community college free for 12,000 Virginians has the potential to stem the tide. Known as G3 — “Get a Skill, Get a Job, Get Ahead” — it covers the cost of community college for low- and middle-income students in high-demand fields.

It’s not the only remedy — trimming the application process, focusing on student finance, shedding administrators and hiring counselors helped one struggling college. But experts say G3 is central to a turnaround.

After seven straight years of declining enrollment, J. Sargeant Reynolds was on the cusp of a breakthrough. The community college with campuses in Henrico County and Richmond had hired a new president, Paula Pando, who made sweeping changes.

She eliminated seven administration jobs, including three vice presidents. She replaced them with advisers, financial aid employees, admission staffers, Spanish-speaking employees and a dean of enrollment.

In the fall of 2019, enrollment finally flattened. Pando had stopped the bleeding.

Then the pandemic came, wiping out her progress. Like many colleges that serve low-income and first-generation students, Reynolds’ enrollment spiraled down again. The number of students has been almost cut in half, from about 13,000 in 2011 to 7,000 last fall.

Facing declining revenue, Reynolds cut its workforce in four consecutive years. After Pando joined in 2018, she lost a dozen or so staffers to layoffs and resignations. She refused to downsize the faculty.

And she took on several other initiatives to boost enrollment. She streamlined the enrollment process, which she said was too onerous. Discovering students had dropped out because they were $100 short on tuition, she helped establish a scholarship program to benefit students who need small amounts of money in order to graduate.

She helped open a food pantry with free fruits and vegetables to ensure students weren’t going to class hungry.

Virginia's elite colleges are booming. Others are struggling to find students.

Across the river in Chesterfield County, John Tyler is speeding up its application process, too, said Bill Fiege, vice president of learning and student success. Tyler, which is changing its name to Brightpoint, instituted a goal of responding to every applicant within 24 hours. It intends to hire eight “navigators” to help prospective students from the time they submit their applications until they start their first class.

Both colleges are trying to cater to students who aren’t interested in a full degree but want a workforce credential, like a commercial driver’s license or a nursing assistant certification, a growing subset of community college students. Tyler started a May-mester, an intensive online program that meets for three weeks in May.

The value of college is being questioned

But there are forces outside their control working against community colleges. Since the pandemic, low-income students have increasingly chosen to enter the workforce. Entry-level jobs often pay $15 an hour to keep up with inflation.

The number of high school graduates in Virginia who choose college has slid from 71% in 2011 to 67% in 2019. During that time, the cost of a state university in Virginia ballooned 38%, and average student debt upon graduation reached $30,000.

The bigger question “is the value of a postsecondary education and how people are seeing it today,” Pando said.

Community colleges are competing with four-year colleges for high school graduates. State universities are taking a larger share of the pool, erecting new buildings and awarding more financial aid each year. Schools like the University of Virginia and Virginia Tech have expressed a desire to grow the number of low-income and first-generation students — the same population community colleges target.

The drop in enrollment doesn’t include Richard Bland, the state’s only junior college, located near Petersburg. Bland’s enrollment has grown 70% in recent years, having added more dual-enrollment students, who earn college and high school credit simultaneously.

Not all community colleges have felt the contraction. Northern Virginia Community College, with 50,000 students, has had a flat enrollment during the past decade. John Tyler was flat until the pandemic.

But Tidewater Community College in Hampton Roads has lost almost half its students, from 32,000 a decade ago to 17,000 now.

The enrollment slide comes at a time when labor participation in Virginia is low. There are 300,000 unfilled jobs in the state, and Virginia ranks 43rd in job recovery since the pandemic, Gov. Glenn Youngkin said.

A decline in college students could lead to a lower-paid workforce. Those who earn associate’s degrees generally make $7,000 more annually than those who stop their education after high school.

The concerns led Youngkin earlier this year to demand the State Board for Community Colleges restart its search for a new chancellor and loop in the governor’s office. The board defied Youngkin’s request and hired Russell A. Kavalhuna, a Michigan community college president, anyway.

Universal free community college was an element of President Joe Biden’s Build Back Better initiative, but the bill stalled for lack of consensus.

Several states have run with some element of free college — there are 33 statewide programs that pay for tuition at community colleges or universities, according to The Washington Post.

G3 program was ‘a pleasant surprise’

Shanna Keaton, a nursing student at John Tyler, received an email last summer with good news. She qualified for a new program called G3 that would cover all her community college expenses. The money was already credited to her account.

Having never heard of G3 before, she Googled it.

“It was a pleasant surprise and something I hope people know specifically more about,” Keaton said.

Students are eligible if their family income doesn’t exceed 400% the federal poverty level — $100,000 for a family of four — and if their field is considered high-demand. The approved programs are health care, early childhood education, information technology, public safety and skilled trades.

For Keaton, G3 covered $1,600 worth of classes each semester and $1,300 toward books and uniforms. The scholarship meant she didn’t have to work while in school, allowing her to graduate sooner.

A 35-year-old mother, Keaton home-schools her three children. She watches lectures online at night and attends clinical rotations and simulations in person once or twice a week. About half of G3 students are older than 25.

She plans to graduate in December, get a job and start progress on her bachelor’s degree. She hopes to work as a sexual assault nurse examiner.

There’s a stigma attached to community college, Keaton said. Outsiders don’t seem to understand the rigor of her classwork.

Virginia's elite colleges are booming. Others are struggling to find students.

Virginia Tech's enrollment has grown 25% in the past decade. But Radford and Longwood have dropped more than 20%.

“This is harder than my undergrad,” said Keaton, who earned a bachelor’s degree in English and sociology at Brigham Young University.

In G3’s first year, the state awarded $21 million to 12,000 students. It’s known as a last-dollar scholarship, meaning it picks up where federal aid, Pell grants and college aid stop and pays the remaining expenses. As time goes on, the General Assembly will adjust the amount of funding as needed, Hashmi said.

Enrollment in G3-eligible programs grew this year, even though total enrollment slid for a 10th straight year. There were 98 nursing students at Tyler this spring, the school’s largest group ever.

Colleges are pushing to get the word out about G3. But growing the program has its challenges. Training students in high-demand fields is expensive. Nursing students need labs, and welding students need welding power supplies. They require more resources than an English class.

At Reynolds, there’s room for 80 nursing students per term, and every spot is full.

Community colleges are filled with opportunities for students to pursue their education, said Tyler’s Fiege. Connecting them to their interests in an affordable way is the hard part.

“How do we help them do it in a path that’s affordable and manageable so they can move forward with their careers? That’s what we’re trying to do.”

FIRST LOOK: FedEx Field opens for the first time in the 'Commanders' era

Cardona, who toured the schools alongside Sen. Tim Kaine, D-Va., spoke with students enrolled in the career technical education program. 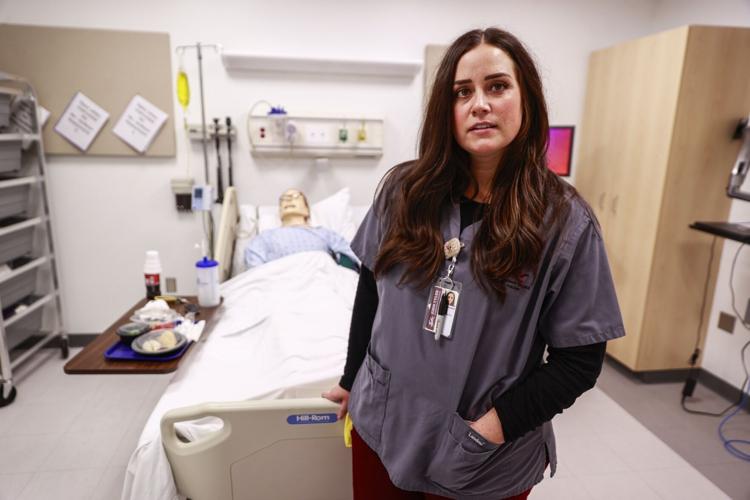 For Shanna Keaton, a 35-year-old nursing student at John Tyler’s Chester campus, G3 covered $1,600 worth of classes each semester and $1,300 toward books and uniforms. The scholarship meant she didn’t have to work while in school, allowing her to graduate sooner. 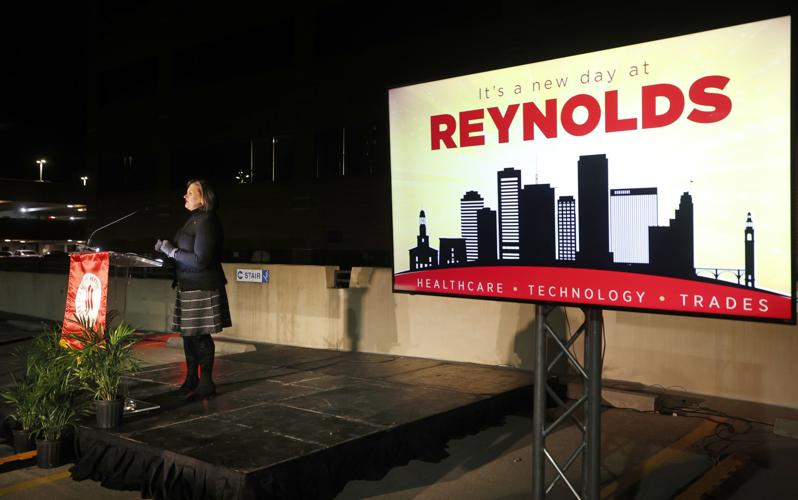 Paula Pando, president of Reynolds Community College since September 2018, spoke last year during a ceremony in which a lighted sign was unveiled at its downtown campus. 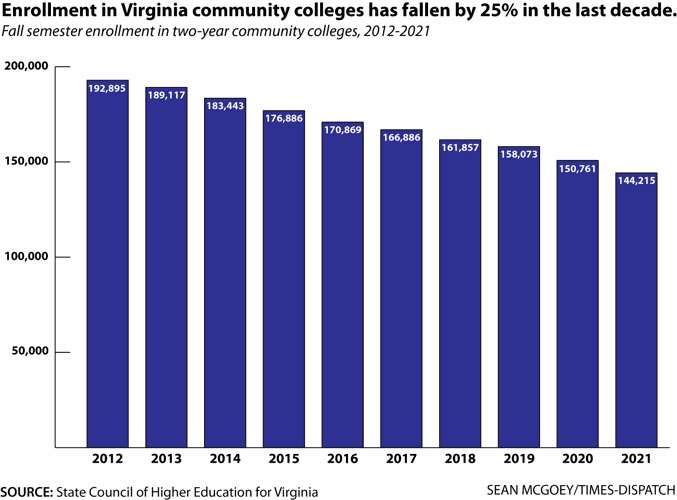 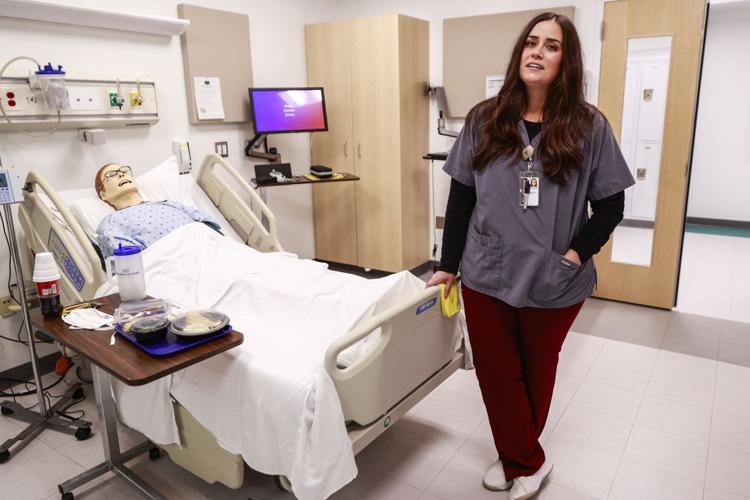