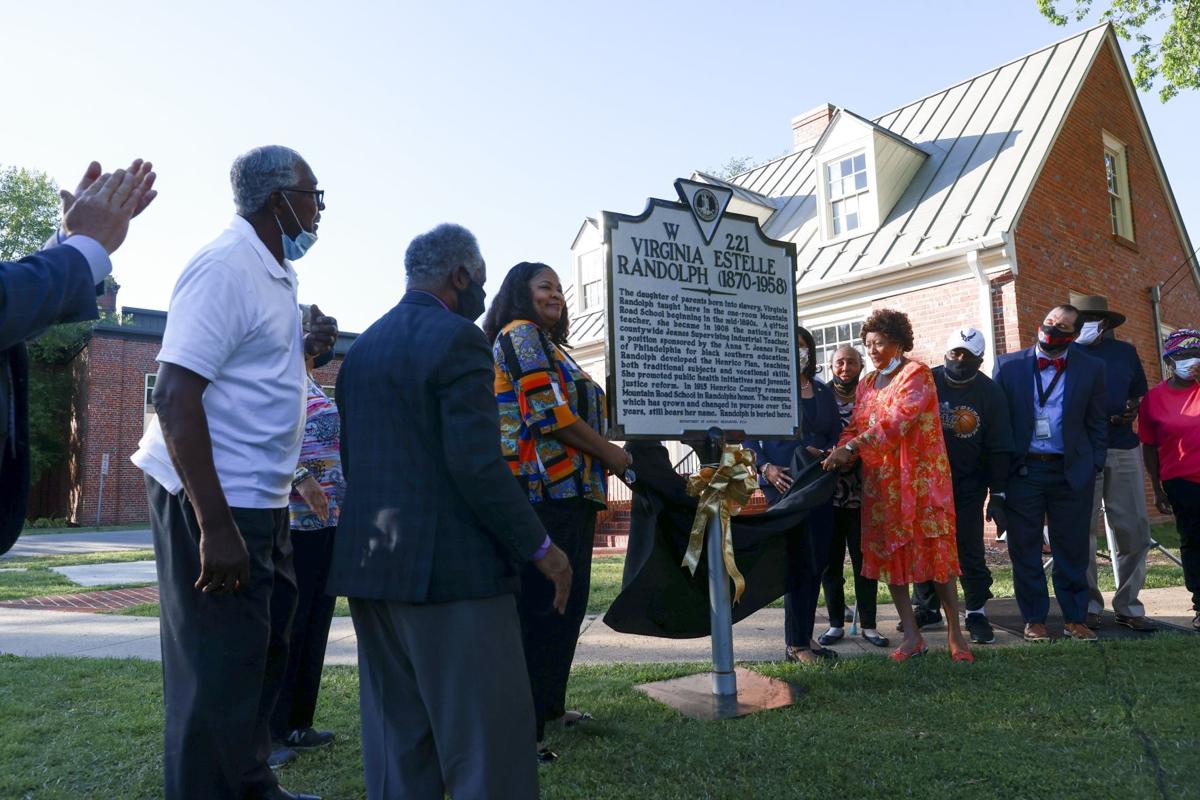 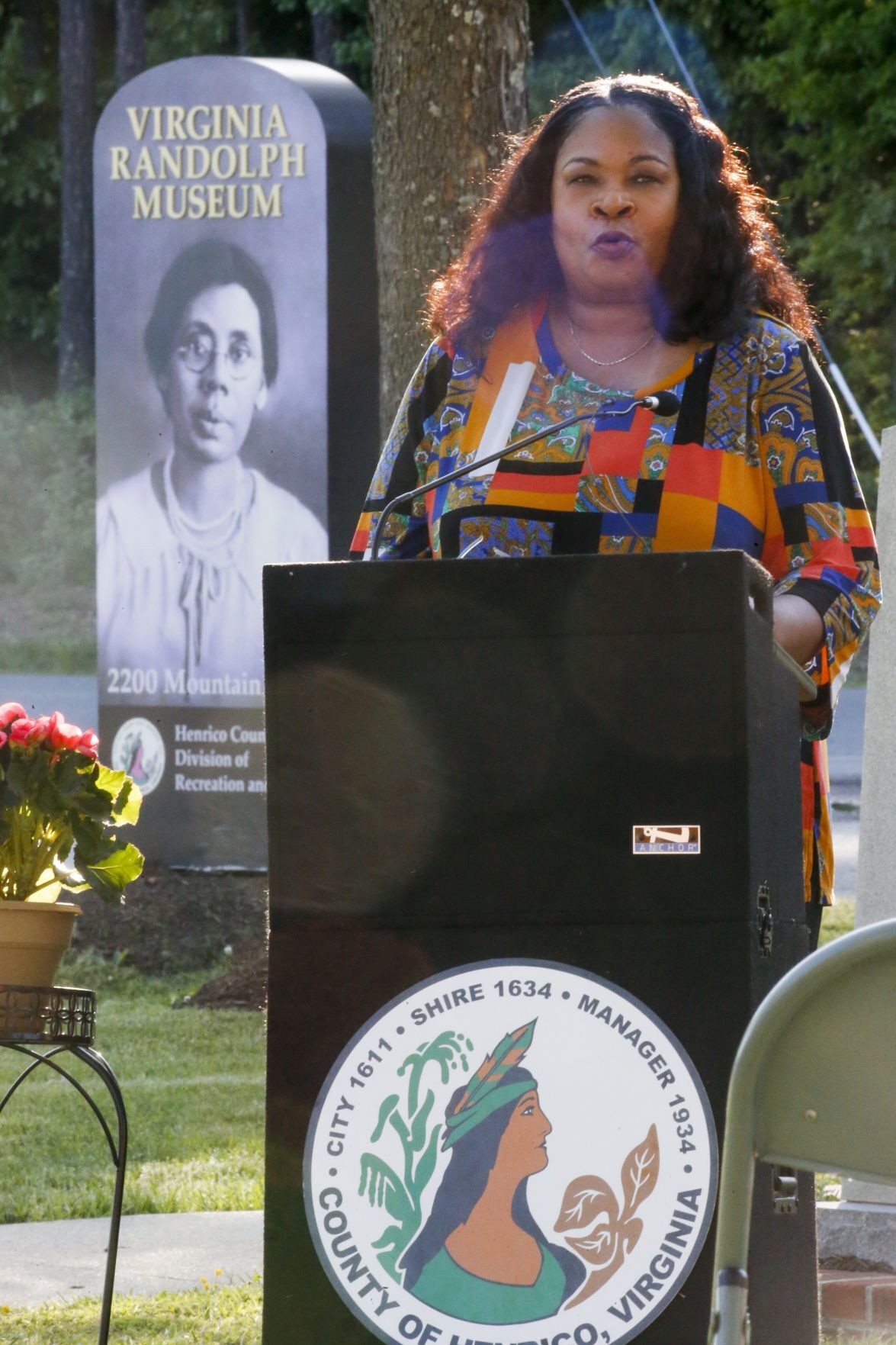 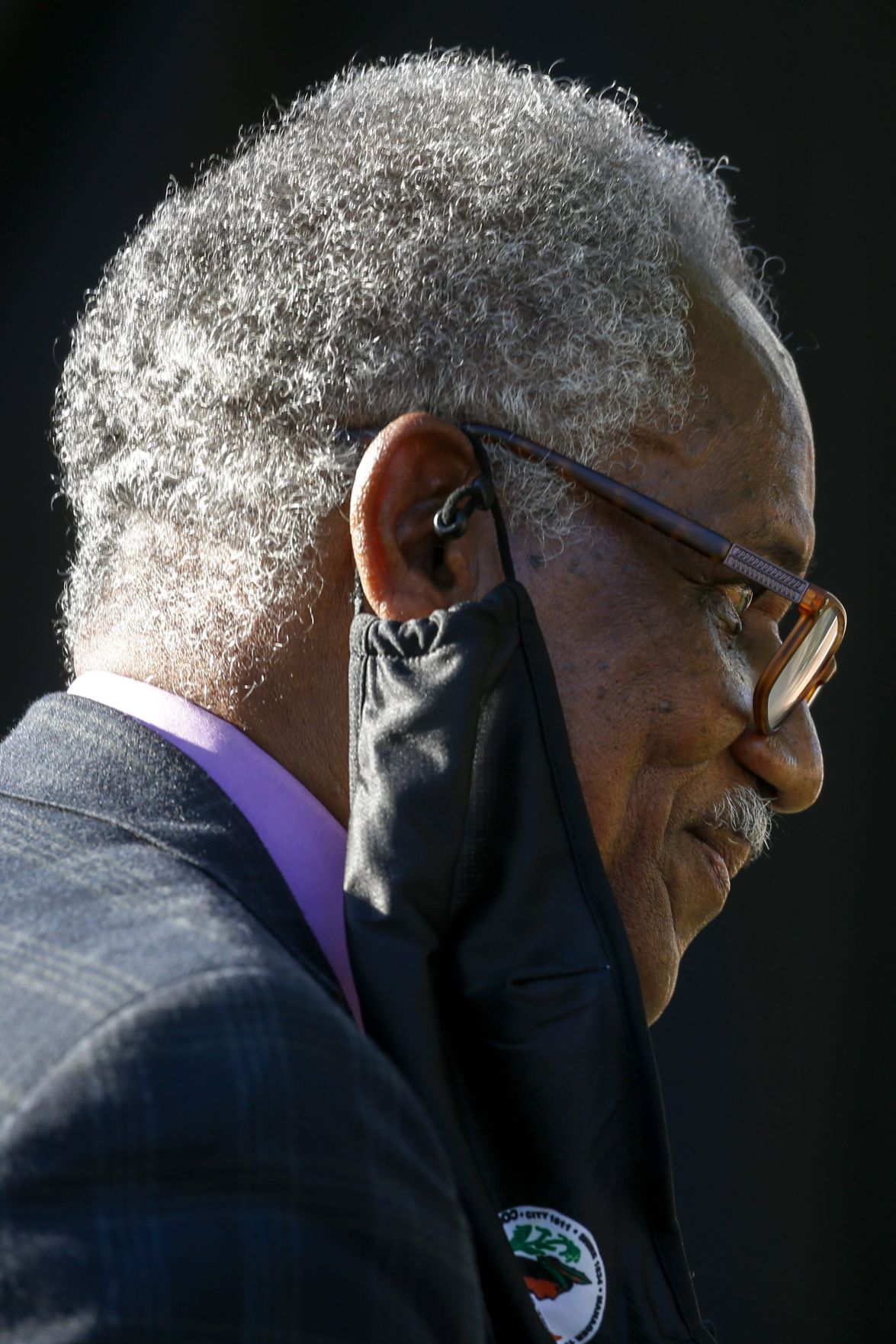 Frank J. Thornton, member of the Henrico County Board of Supervisors, gives remarks during a Virginia Highway Marker rededicating ceremony on Thursday, May 6, 2021 at Virginia Randolph Museum in Glen Allen, Virginia. 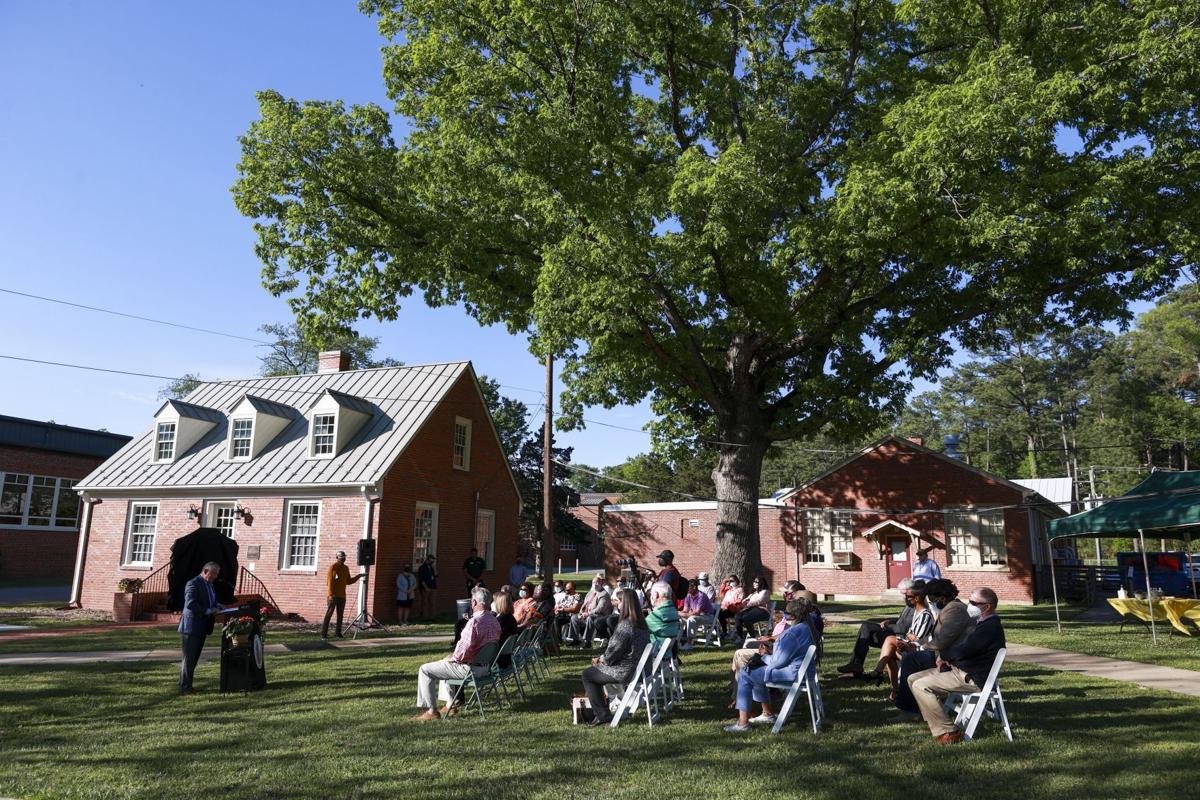 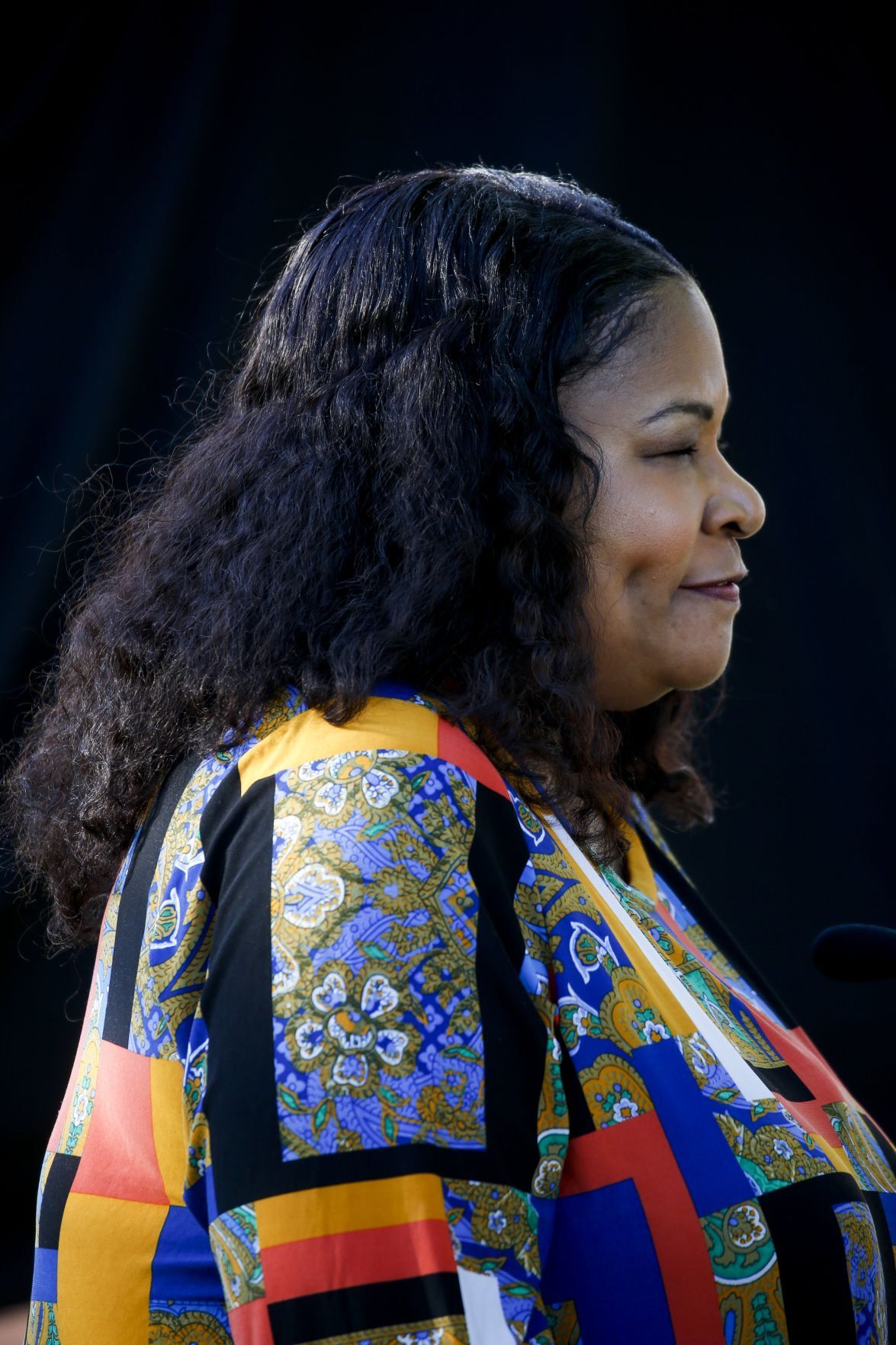 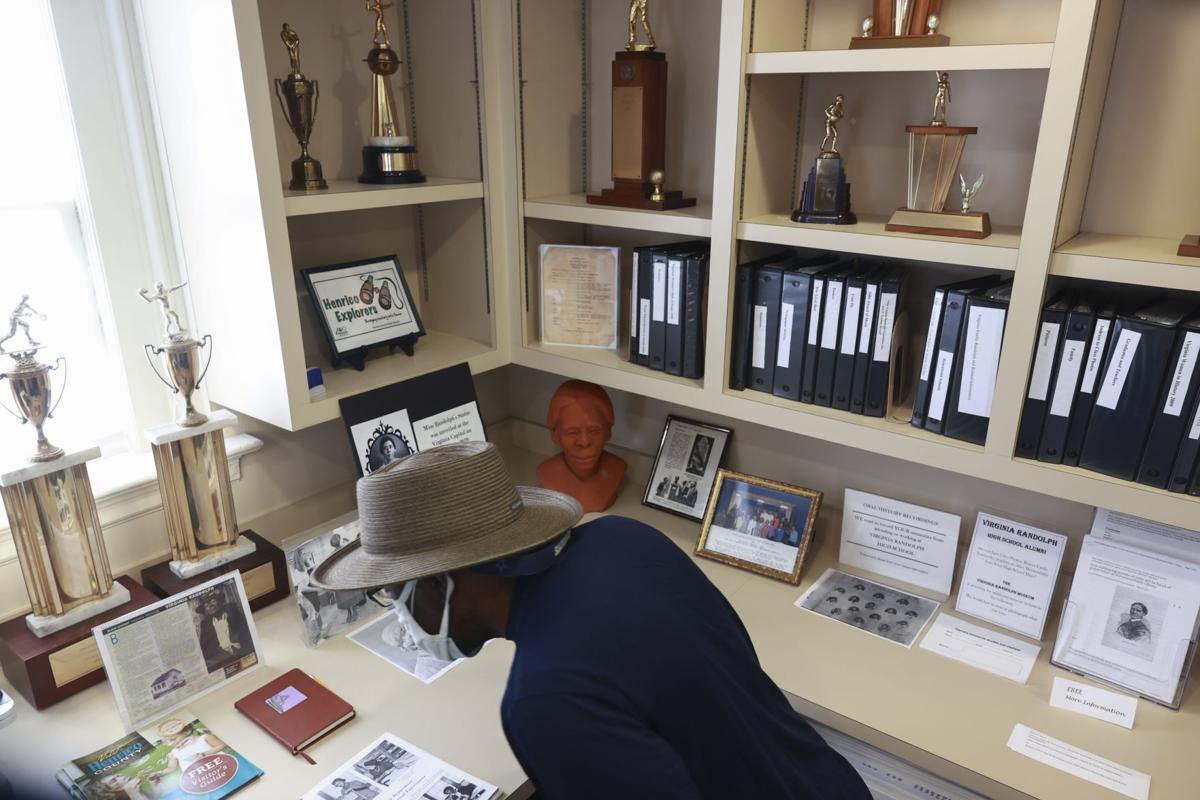 Henry Johnson looks through his old yearbook before a Virginia Highway Marker rededicating ceremony on Thursday, May 6, 2021 at Virginia Randolph Museum in Glen Allen, Virginia. 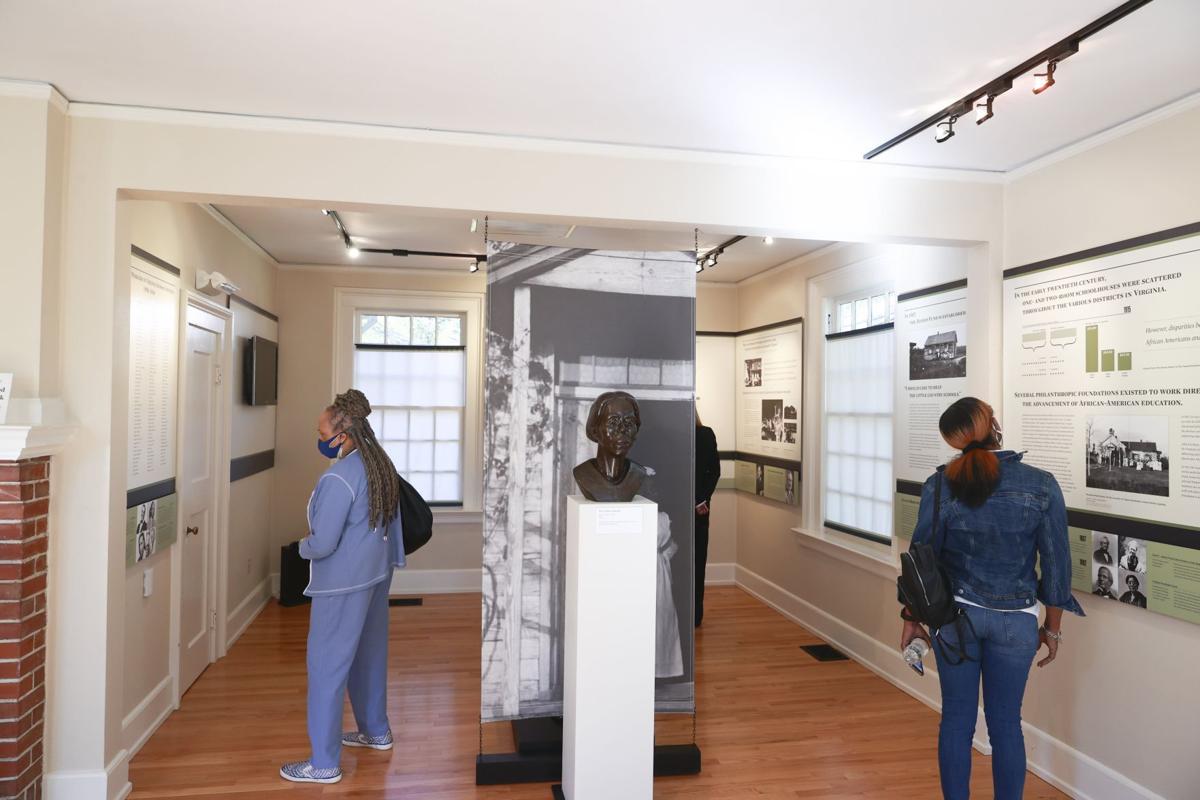 People make their way through the museum before a Virginia Highway Marker rededicating ceremony on Thursday, May 6, 2021 at Virginia Randolph Museum in Glen Allen, Virginia.

A group gathered in Glen Allen to slip the cover off a shiny new highway marker designed to further burnish the legacy of seminal Black educator Virginia Estelle Randolph.

Like an eagle-eyed teacher grading papers, historian Elvatrice Belsches had combed through Randolph’s records and submitted corrections on the educator’s original highway marker erected in 1992 by the Virginia Department of Historic Resources alongside Mountain Road.

Randolph was born in 1870, not 1874 — a correction Randolph might not have appreciated, a speaker joked Thursday. Also, Randolph began teaching at the one-room Mountain Road School in 1894, not 1892. Randolph is known for her innovative integration of the industrial and vocational arts into the academic curriculum, but Belsches wanted to highlight Randolph’s efforts on behalf of juvenile justice advocacy and public health.

“My calling is to expand the narratives,” she said during a sun-splashed ceremony Thursday evening outside the Academy at Virginia Randolph, whose grounds include Randolph’s gravesite and museum, and whose vocational offerings continue her legacy.

“Fewer know of the international impact of [Randolph’s] methods. Moreover, her contributions to public health and juvenile justice truly need to be illuminated.”

The rededicated sign is but one aspect of Belsches’ Virginia Randolph Project.

Belsches has received a $10,000 grant from Virginia Humanities to support her research and script development for a Randolph documentary, which she also will produce and direct. Footage for the documentary was filmed Thursday.

Although Randolph primarily is associated with Henrico County, she was a lifelong resident of Richmond, living in Carver and Jackson Ward. Randolph never married and had no biological children of her own. But working with the courts, she boarded up to 70 troubled juveniles, including 17 who stayed with her simultaneously, Belsches said.

Her Encyclopedia Virginia entry on Randolph quotes Samuel Chiles Mitchell, a professor at Richmond College (now the University of Richmond), stating: “Her work ranks with that of Booker T. Washington. It has lacked the spectacular element that attaches to the great principal of Tuskegee; but in significance it surpasses, in some ways, even his achievements. Virginia Randolph has done the common thing in an uncommon way.”

“Miss Randolph’s impact on the history of education in Virginia — and on the lives of her students — was profound. Her influence extends nationally and even internationally; but her story is not well known today,” said David Bearinger, Virginia Humanities’ senior director for Grants & Global Virginia Programs.

“Our decision to support this film was based on our desire to see an important story told. We were also inspired by its potential use in classrooms and by the superb team guiding this effort, especially Elvatrice Belsches, who is one of the finest independent historians working in Virginia today.”

Indeed, Belsches was an art department researcher for Steven Spielberg’s 2012 film “Lincoln,” which was shot in the Richmond-Petersburg area.

Her esteem for Randolph is passed down from her father, the late Ernest Parker Sr., a revered mathematics teacher at Virginia Randolph during the segregation era who spoke of Randolph visiting his classroom after her retirement.

About 20 years ago, Parker took his daughter to a program celebrating Randolph’s life, where she was mesmerized by a speech by historian Warner M. Jones Sr., a graduate and former principal at Virginia Randolph Elementary School. “It was then that I decided that I wanted to do a documentary on her.”

When Jackson Davis became superintendent of schools in Henrico, he saw firsthand the impact of Randolph’s methods. Nominated by Davis, Randolph would in 1908 become the first countywide Jeanes teacher in the South, part of a program named for Anna T. Jeanes, a Quaker philanthropist from Philadelphia who funded Negro rural schools in the South. Randolph traveled around Virginia and the Carolinas to train other Jeanes teachers.

Davis eventually would hold national offices at the General Education Board and the International Education Board, traveling and supporting the training of Jeanes teachers in the rural American South and Africa.

Today, Randolph’s template — the integration of life skills, vocational skills and the industrial arts in education — is employed as part of workforce readiness programs, Belsches said.

She adds that Randolph’s interracial coalition building more than a century ago can serve as a blueprint today “in addressing societal challenges related to health equity and equity in education.”

Belsches said Randolph embodies the credo, “Find a way or make one.”

It’s a narrative well worth expanding.

Frank J. Thornton, member of the Henrico County Board of Supervisors, gives remarks during a Virginia Highway Marker rededicating ceremony on Thursday, May 6, 2021 at Virginia Randolph Museum in Glen Allen, Virginia.

Henry Johnson looks through his old yearbook before a Virginia Highway Marker rededicating ceremony on Thursday, May 6, 2021 at Virginia Randolph Museum in Glen Allen, Virginia.

People make their way through the museum before a Virginia Highway Marker rededicating ceremony on Thursday, May 6, 2021 at Virginia Randolph Museum in Glen Allen, Virginia.