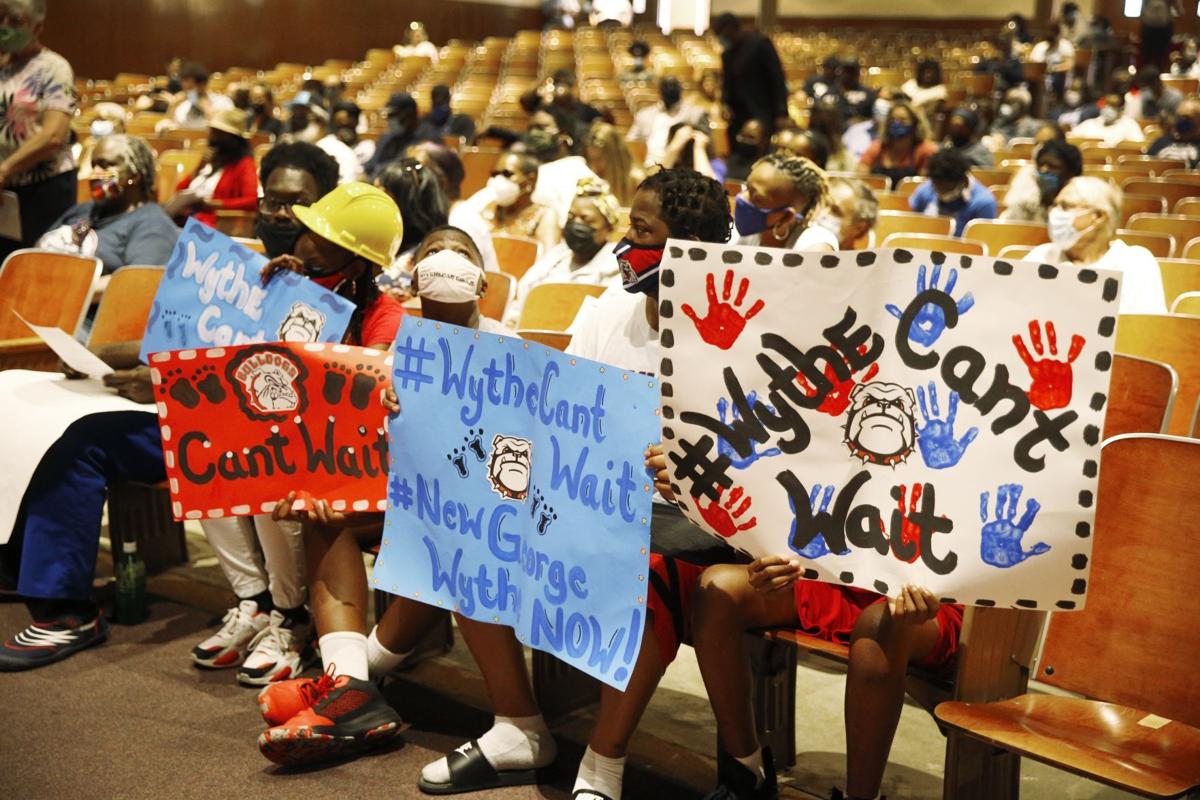 On Tuesday, students and families shared their views during the Richmond School Board meeting in the auditorium of George Wythe High School. 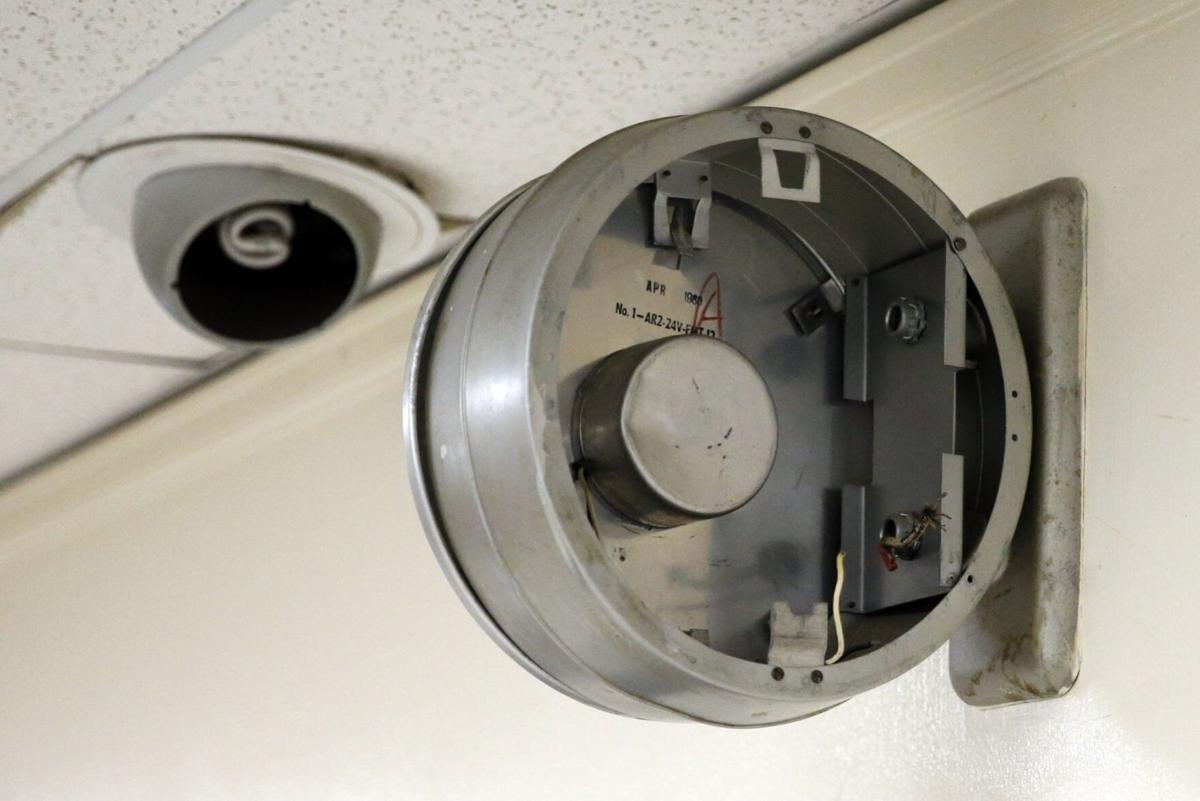 George Wythe high school in Richmond, now into its seventh decade shows signs of its age. A non-functioning mechanical clock is stamped “APR 1960” inside the clock housing. Photo on Tuesday, July 13, 2021. 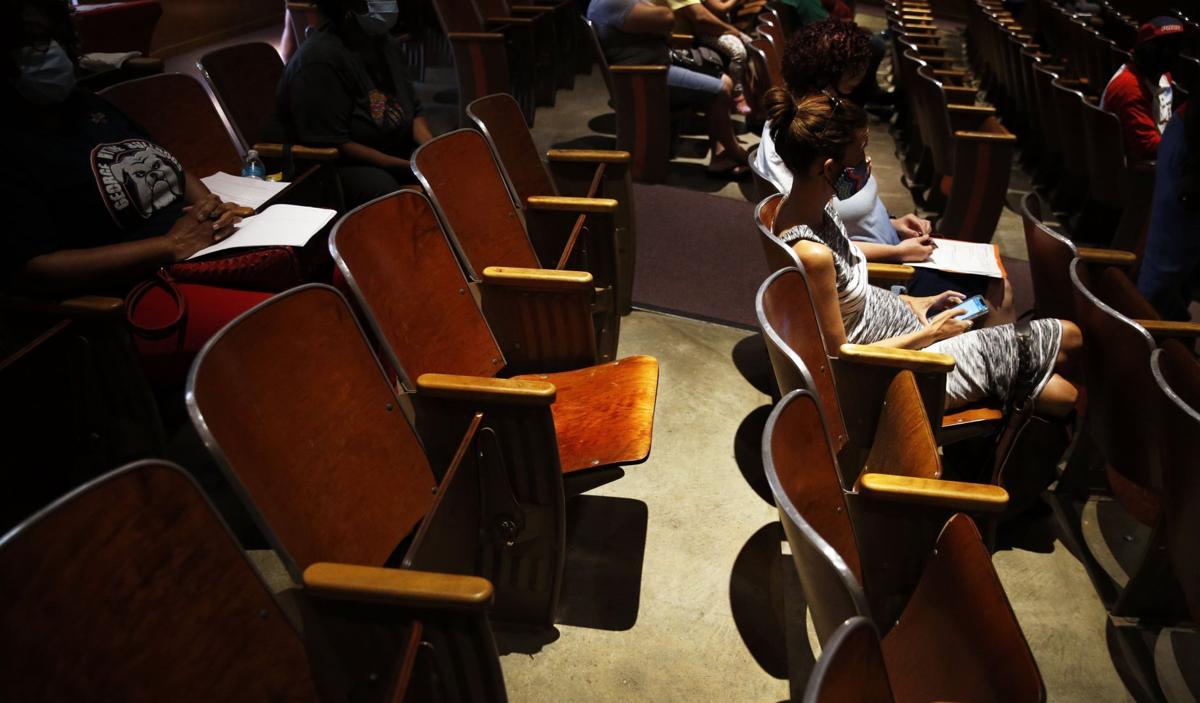 If Richmond School Board Vice Chair Jonathan Young has his way, city and school officials will not only partner on a new George Wythe High School, but will deliver the product a year ahead of schedule.

Young was part of a five-member majority on the School Board that voted in April to reclaim control of the school building process from the city administration — a move that portended delay in the opening of a new Wythe because of the personnel who would have to be hired.

But at Monday’s School Board meeting, Young will attempt to move forward on the Wythe project in partnership with the city, including a joint evaluation panel of city and school officials, with the goal of opening in 2024.

That’s a year ahead of the date currently projected by the administration of Mayor Levar Stoney. But Young reasons that if Henrico County Public Schools can get new Tucker and Highland Springs high schools up and running in three years, so can Richmond.

His proposal comes in the aftermath of a high-octane hearing Tuesday in which members of the George Wythe community demanded that the board compromise and collaborate with Stoney in building a new Wythe as soon as possible.

Board member Liz Doerr also is proposing that the school district proceed with the Wythe procurement process in partnership with the city. But the position by Young, part of the board majority that asserted control of the school-building process, carries particular weight.

There are potential rubs.

To save time, Young would use a prototype school model. And to save money, the new school would have a smaller footprint than planned. He said he’s had a lot of conversations in the past few days. “I’m not gonna lie to you,” he said, “I think there are still some differences of opinion.”

School Board member Stephanie Rizzi, in an interview Thursday, stood by the majority’s position.

“For me, schools building schools will put more of the decision-making power in the hands of the people,” she said.

Said Young: “People can ... affirm schools building schools and still recognize that there is an opportunity and an obligation to partner and to collaborate. Those two things cannot and should not be mutually exclusive.”

Some would dismiss Tuesday’s hearing as being orchestrated by Stoney. The speakers included some of his usual allies, for sure. But there were too many emotional Wythe parents, alumni and teachers to attribute it all to political stagecraft.

If the mayor had this much manipulative influence, the Navy Hill project would be underway.

Yes, there’s posturing on both sides. But the mayor’s is better. He has the bully pulpit, the purse strings and the people on his side.

Stoney managed to win re-election despite the hard feelings that remain over his handling — some would call it his enabling — of the heavy-handed police response to last year’s social justice protests. On this school issue, he has tapped into public sentiment more effectively than his progressive adversaries. He played political chess but didn’t have to work terribly hard to stir up the Wythe community.

Why would he have to?

The mold, rodent droppings, broken seats and outmoded conditions at Wythe did the work for Stoney, along with some amassed school credits.

“While there are many who critique the administration, one thing that I feel like he has gotten right is he’s stuck to his word on being the education mayor,” said Amy Wentz, who served on Stoney’s Education Compact but supported Alexsis Rodgers in this past November’s mayoral election.

Stoney has fully funded school budgets, leveraged the meals tax for school facility construction and “made an effort every year to go into every single school and meet with the kids and meet with teachers,” Wentz said. “I think that regardless of how critical we are of him, those things are facts. Families see him. It’s hard to go against that.”

Tuesday, the mantra of compromise sounded reasonable; for the board majority to remain unmoved would look stubborn or driven by political animus toward Stoney.

“And I am of the belief if the mayor approached this with an attitude of collaboration and treated the School Board members with the same respect that he would want, that we could definitely work together to get George Wythe built as soon as possible ... because that is absolutely what all five of us want. We want the same thing that the people who stood up and spoke want.”

The members of the Wythe community demand proof. Monday is a chance for the board to provide it.

On Tuesday, students and families shared their views during the Richmond School Board meeting in the auditorium of George Wythe High School.

George Wythe high school in Richmond, now into its seventh decade shows signs of its age. A non-functioning mechanical clock is stamped “APR 1960” inside the clock housing. Photo on Tuesday, July 13, 2021.