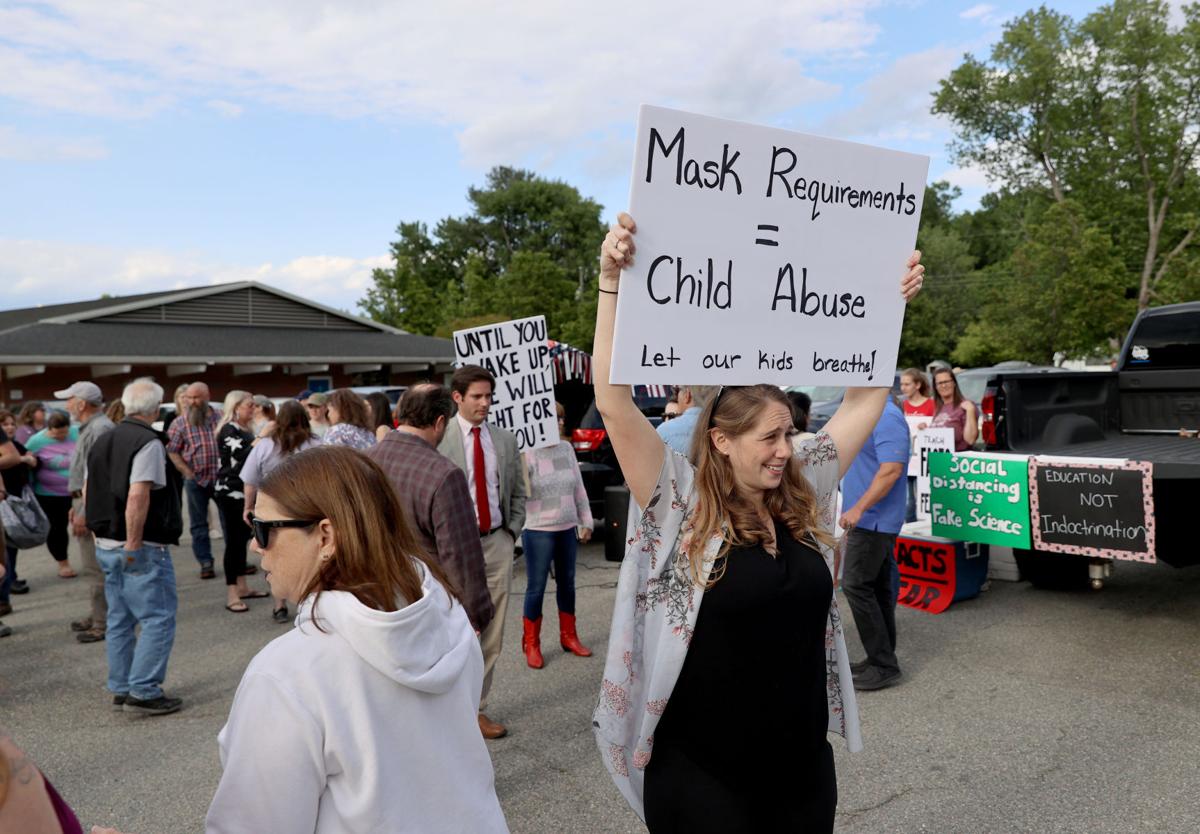 Danielle, a parent of Hanover County School students who did not give her last name, protested in the school administration’s parking lot on May 11. 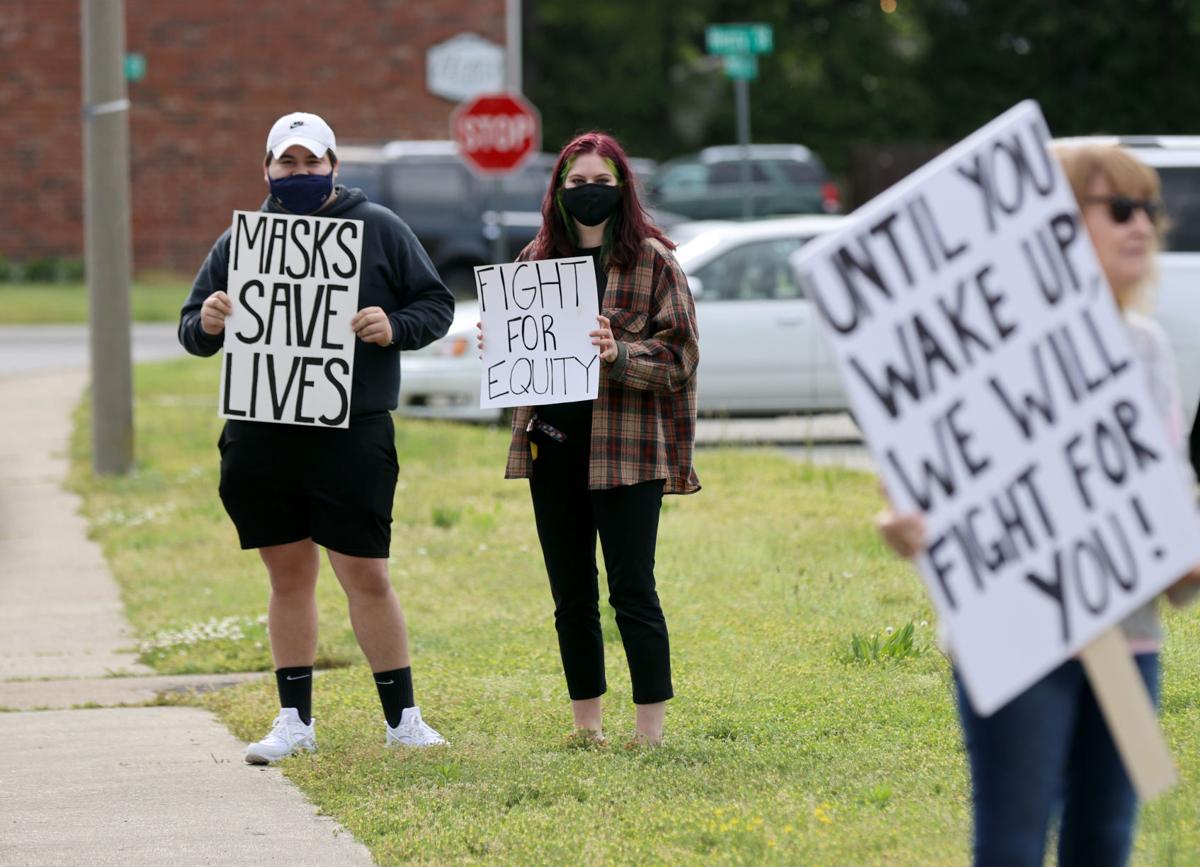 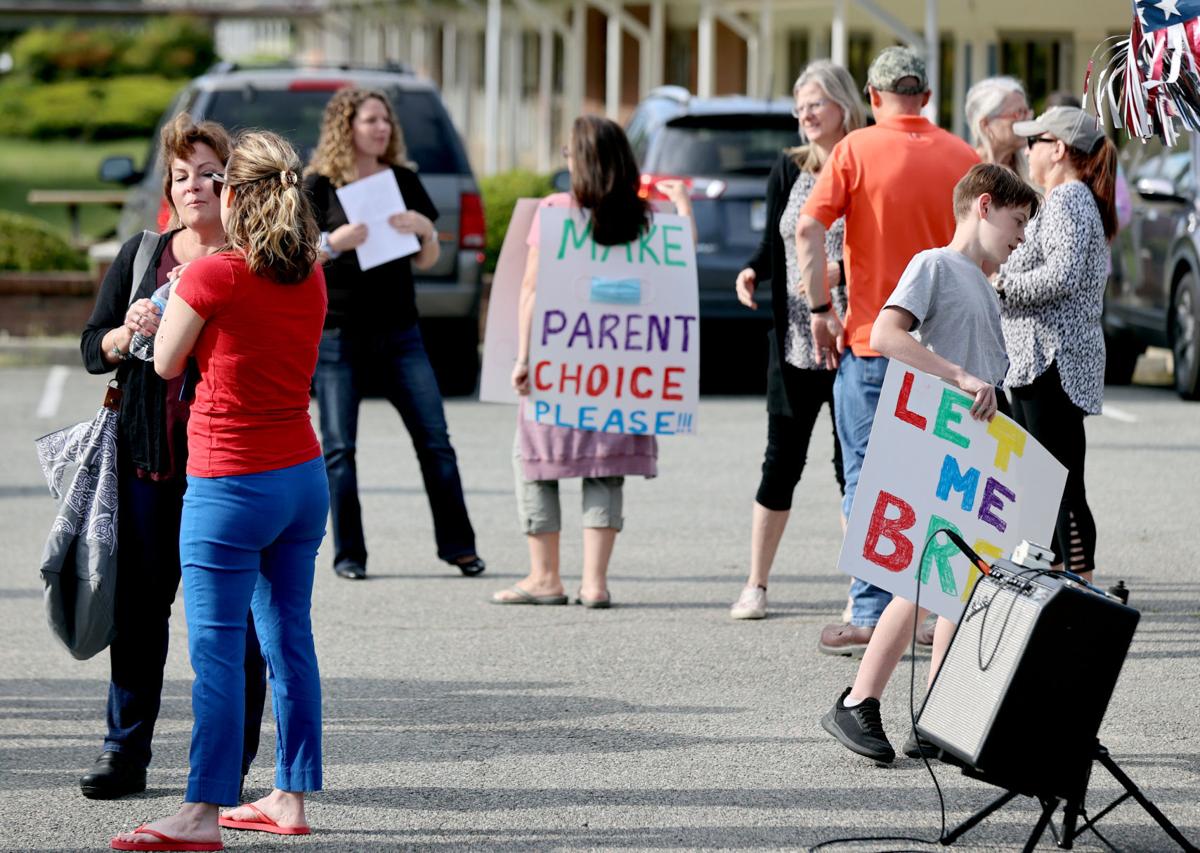 Protesters gather during “Free Our Schools Rally” in the school administration building parking lot on May 11, 2021.

How else can we explain the dissembling and denial on display, from the parking lot of the Hanover County School Board to the halls of Congress?

Tuesday — angered by the school district’s first equity audit — the right-wing Hanover Patriots community group attacked such imaginary Hanover County Public Schools ills as “Covid tyranny,” an “anti-American Marxist agenda” and critical race theory. The group — which traveled to Washington for the pro-Donald Trump rally that preceded the Jan. 6 insurrection at the U.S. Capitol — displayed a sign about not being judged by the color of your skin, but by the content of your character.

If you consider “equity” in pursuit of social justice a four-letter word, you shouldn’t hide behind the Rev. Martin Luther King Jr.’s “I Have a Dream” speech. He’s not on your side.

Speaker Jessica McLane said the existence of an equity audit means school officials “are looking for racism, they’re going to find racism and then they’re going to try to fix it ... even though it wasn’t there.”

The group shouldn’t have had to look hard to find racism. They were standing on ground tainted by it.

The Hanover School Board offices were repurposed from a formerly all-Black segregation-era school, John M. Gandy, which opened in 1950.

As noted on the Ashland Museum website, “This new school gave black students and teachers central heat and indoor plumbing for the first time and it had a gymnasium. It replaced the Hanover County Training School, a frame building without central heat and bathrooms that had been on the same site.”

Systemic racism’s connective strands do not fall away on their own like autumn leaves. Hanover’s schools fully desegregated in 1969. But until this past year, two school buildings bore the names of Confederate leaders who sought to preserve the enslavement of Black bodies. During this past summer’s racial reckoning, Hanover students, teachers and alumni of color expressed their profound alienation on the Instagram site Black@HanoverCPS.

The objectives of the equity audit — among them, that students “feel valued and empowered as part of our rich community of learners,” and “see themselves in the lessons we teach and the role models we provide” — should not inspire white grievance. A poster in Black@HanoverCPS lamented not having a single Black teacher during the person’s six years in the district.

As for critical race theory, it is not part of the Hanover school curriculum, spokesman Chris Whitley says.

Kimberlé Crenshaw, a founding critical race theorist and a law professor who teaches at the University of California, Los Angeles and Columbia University, explained the concept to CNN: “Critical race theory is a practice. It’s an approach to grappling with a history of white supremacy that rejects the belief that what’s in the past is in the past, and that the laws and systems that grow from that past are detached from it.”

You don’t have a problem with this concept unless you don’t wish to interrogate structural racism. Virtually every data point — from crime and punishment, to homeownership, to wages and wealth, to health outcomes — mocks your denial.

Tuesday’s misinformation did not stop on racism.

“Overwhelming mountains of evidence show that this virus doesn’t affect children — absolutely no risk to them,” McLane said.

Children are far less at risk of falling severely ill or dying from this coronavirus, but it happens. A recent NPR report placed COVID-19 among the leading causes of child death. The potentially deadly Multisystem Inflammatory Syndrome in Children (MIS-C) has been associated with COVID-19. Asymptomatic children can spread the virus. And to underscore the prevalence of systemic racism, Black and Latino children have been disproportionately affected by COVID-19 and related illnesses.

The pandemic, the assault on democracy and cyber insecurity are among the crucial problems we must address. Instead, too many folks have embraced an Orwellian alternate reality in which fair elections are fraudulent, anti-racism is racism, a preventive public health measure is child abuse and the deadly Jan. 6 insurrection was, in the words of a GOP congressman, like “a normal tourist visit.”

A group of retired generals, sounding off like partisan hacks drunk on Trump-flavored Kool-Aid, bought into the big lie of a stolen presidential election.

Lies, dissembling and equivocation are destroying America — not equity or other bogus boogeymen.

Danielle, a parent of Hanover County School students who did not give her last name, protested in the school administration’s parking lot on May 11.

Protesters gather during “Free Our Schools Rally” in the school administration building parking lot on May 11, 2021.