Fourth-graders in Virginia have suffered some of the largest declines in reading and math proficiency in the nation since the start of the COVID-19 pandemic, according to a newly released national assessment.

Gov. Glenn Youngkin on Monday placed blame for the grim results on his Democratic predecessors, and used the scores as an opportunity to announce plans to overhaul the state’s school accreditation system and toughen passing criteria for state standardized testing.

“Our nation’s children have experienced catastrophic learning loss, and Virginia students are among the hardest hit,” Youngkin said at a news conference on Monday. “We also must clearly recognize that the underpinnings to this catastrophic performance were decisions that were made long before we’d ever heard of COVID-19.”

The National Assessment of Educational Progress, also known as “The Nation’s Report Card,” shows that fourth-grade reading scores in Virginia fell by 10 points, the largest dip in the nation, since the last assessment in 2019. Fourth-grade math scores dropped by 11 points, a mark surpassed only by Delaware and the District of Columbia.

Eighth-grade scores also fell in Virginia, with math scores down eight points, equal to the nationwide average, and eighth-grade reading scores down two points, which the National Center for Education Statistics said was not a statistically significant change.

Virginia’s performance on the assessment, Youngkin said, “clearly indicates that too many of Virginia’s leaders did not meet that obligation to provide excellent and outstanding education for our children.”

Although other research has already shown that the pandemic impeded student achievement, results from the national assessment released Monday give the most detailed and reliable measure yet of the pandemic’s effect on children’s learning.

“More than 20 years of gains have been completely wiped out, and this massive learning loss cannot be blamed solely on the pandemic because nearly half of the learning loss occurred before anyone in this room ever heard of COVID-19,” Balow said.

Balow’s assertions describe the trend in fourth-grade reading scores fairly well, but they do not apply consistently across other subjects and grade levels.

Sen. Louise Lucas, D-Portsmouth, head of the state Senate’s Education and Health Committee, said now is not the time to point fingers at those who are no longer in leadership.

“In a time where we need proper leadership from the governor, instead of taking time off the road to find solutions to learning loss problems in Virginia’s schools, he’d instead place the blame on previous administrations,” Lucas said in a statement.

“While Youngkin is trying to prove he is fit for national leadership, he isn’t dealing with the problems in his Commonwealth. We have staffing shortages in schools across Virginia, students aren’t receiving the proper resources to set every child up for success, and many schools need funding for structural improvements to increase the quality of education.”

Math scores in both fourth and eighth grade dipped slightly from 2017 to 2019 — decreases of 1 and 3 points, respectively — but only fell significantly since the 2019 assessment. And while eighth-grade reading scores fell more sharply between 2017 and 2019, Virginia’s scores had been roughly the same since 1998.

But Republican leaders still took the opportunity to lay the blame on decisions made during the McAuliffe and Northam administrations.

“Failure is a choice, and past Democratic leaders chose to fail our students by prolonged school closures and lowering academic standards,” said House Speaker Todd Gilbert, R-Shenandoah, in a statement. “Look no further than to states that reopened schools sooner and their student achievement during the pandemic.”

The head of the federal center that administers the assessment said there is nothing in the data that shows a measurable difference in the performance between states and districts based solely on how long schools were closed.

Del. Schyuler VanValkenburg, D-Henrico, who is also a teacher, said one of the reasons for the decline in scores is a lack of funding.

“The General Assembly has underfunded public schools since the great recession in 2009. ... You had for over a decade a harshly GOP-controlled General Assembly, where school funding was kind of at the back of the bus,” VanValkenburg said.

Youngkin on Monday announced seven “concrete actions” to build on what he called his commitment to move Virginia’s educational system in the right direction.

The governor, whose administration has said for months that the criteria for determining proficiency on the state’s Standards of Learning assessments are too lenient, doubled down on that stance on Monday.

He called Virginia’s standards “the lowest in the nation” and said his top educational priority is for the state Department of Education to establish the highest passing threshold in the country “by the time our students take SOL exams next spring.”

Youngkin acknowledged that such a move might result in further declines in scores in the short term but said he believes it will pay off in the long run.

“The data shows us that when we challenge our students and our teachers, they rise to the occasion,” he said.

Youngkin is also directing the Board of Education to overhaul the school accreditation system, which he said has “masked the fact that we are failing too many of our students across the commonwealth.”

Last month, Youngkin and Balow had cast doubt on the state’s accreditation system, after the first year of ratings since the COVID-19 pandemic began showed that 89% of Virginia public schools are fully accredited — a drop of just 3 percentage points from three years ago.

Youngkin said Monday that the current accreditation model is difficult to understand, and a new system might include something like a letter grade.

He called out five of Virginia’s largest school divisions by name — including Richmond and Henrico — and suggested that they use their remaining funds to bring back retired teachers to provide supplementary instruction before and after school, pay bonuses to teachers who improve test scores, or even provide direct subsidies to families to hire tutors for their children.

U.S. Department of Education guidelines for the use of federal relief funds suggest that local school divisions can use the money to implement tutoring programs, including “intensive or high-dosage tutoring,” to offset pandemic-related learning loss, but it is unclear whether Youngkin’s suggestion of sending money directly to families to employ outside tutors would fall under the guidelines.

School divisions submitted their plans for spending the most recent distribution of relief funds over a year ago and, in many cases, have already spent millions of what was allocated to them, but Youngkin directed Balow to require all school divisions to revamp their plans by Dec. 31.

“The money is in the bank. It should be spent on things that will get our kids back on track for success,” Youngkin said. “That’s why the money was given — to put it to work.”

Collection: Our 'Virginia from above' series

Every week, Times-Dispatch visual journalists take you to a unique location in our "Virginia from above" series.

'A way of protest': Unsatisfied Richmond-area teachers leaving in droves

Chesterfield had the most teacher resignations in the Richmond area, with 538 in the past five Junes, followed by 363 in Henrico, 333 in Richmond and 131 in Hanover.

State Superintendent Jillian Balow first urged the Board of Education in August to allow more time before its first thorough review of the proposed standards.

Virginia students from fourth through eighth grade  lost nearly two-thirds of a year’s worth of ground in reading and almost a full year’s worth in math – the sixth and seventh largest declines in the country, respectively. 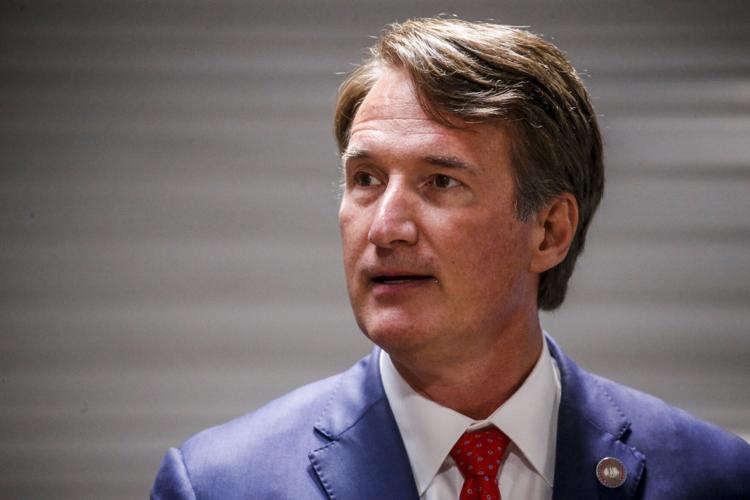 Gov. Glenn Youngkin has often spoken of a red wave that he hopes will result in the removal of U.S. House Speaker Nancy Pelosi. 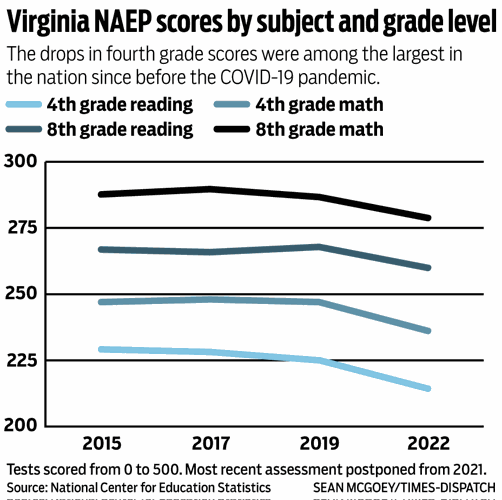