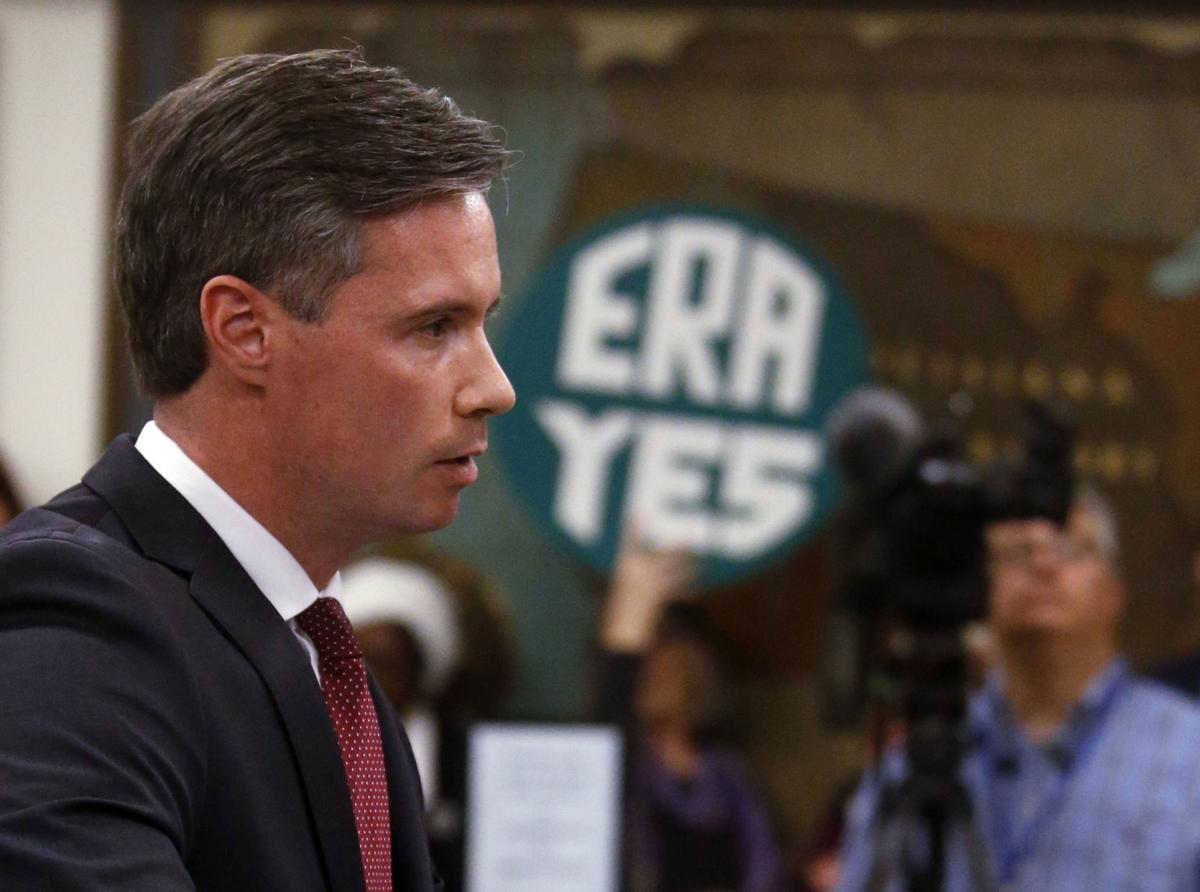 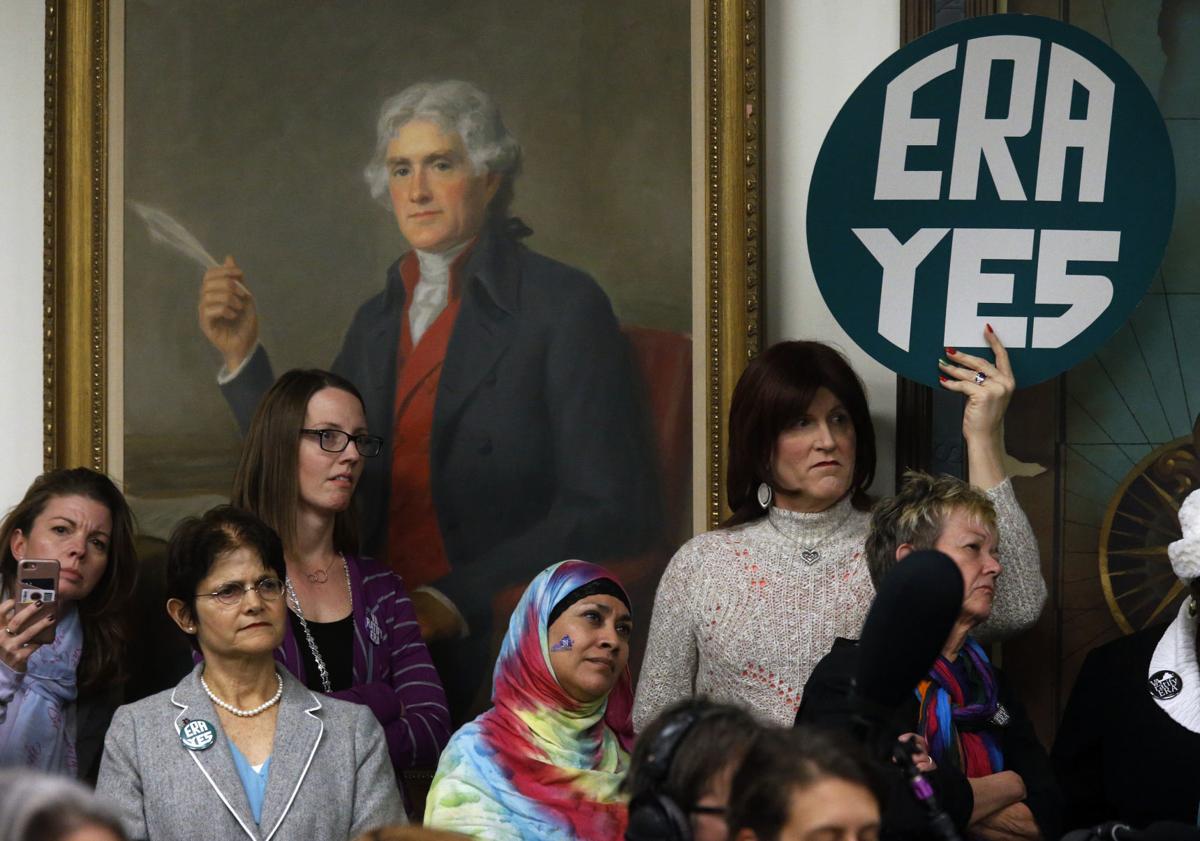 ERA supporters stood under a portrait of Thomas Jefferson on Wednesday at the Pocahontas Building. 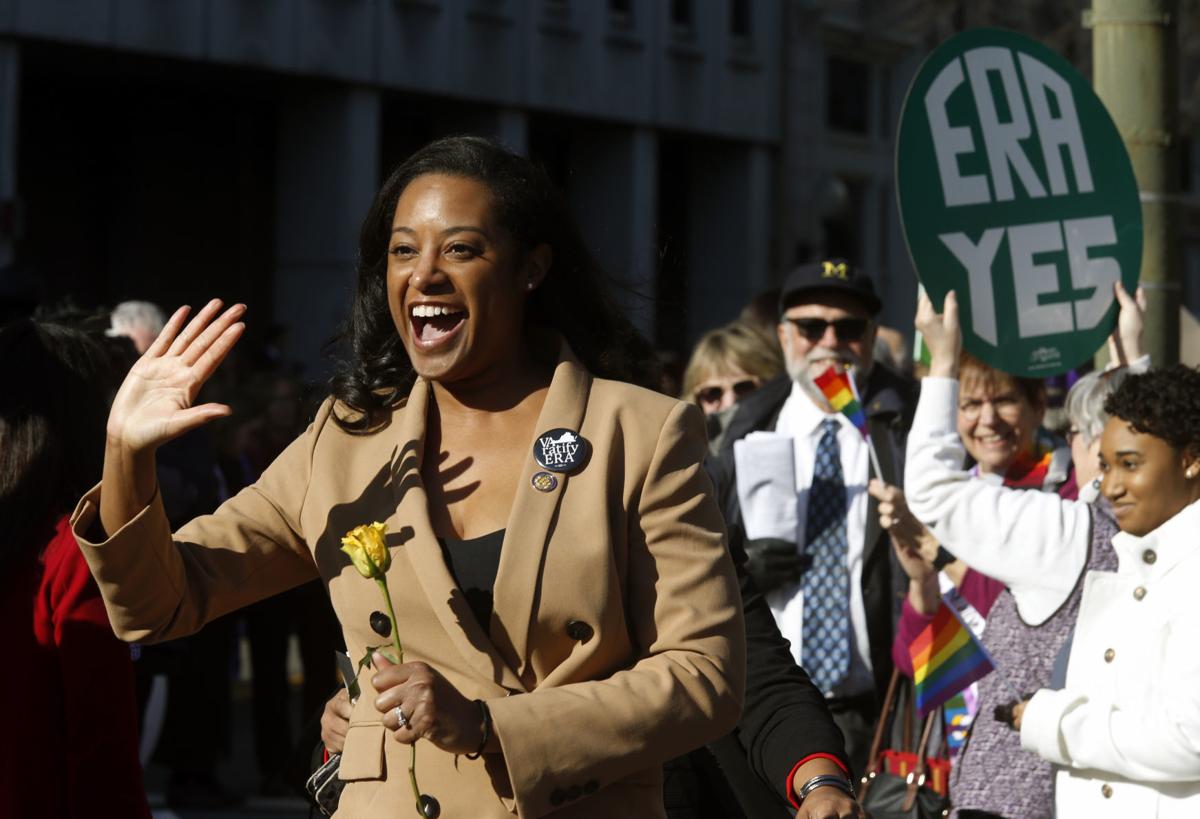 Del. Jennifer Carroll Foy, D-Prince William, sponsor of a House measure to ratify the Equal Rights Amendment, waved to ERA supporters outside the state Capitol in Richmond in this 2019 photo. 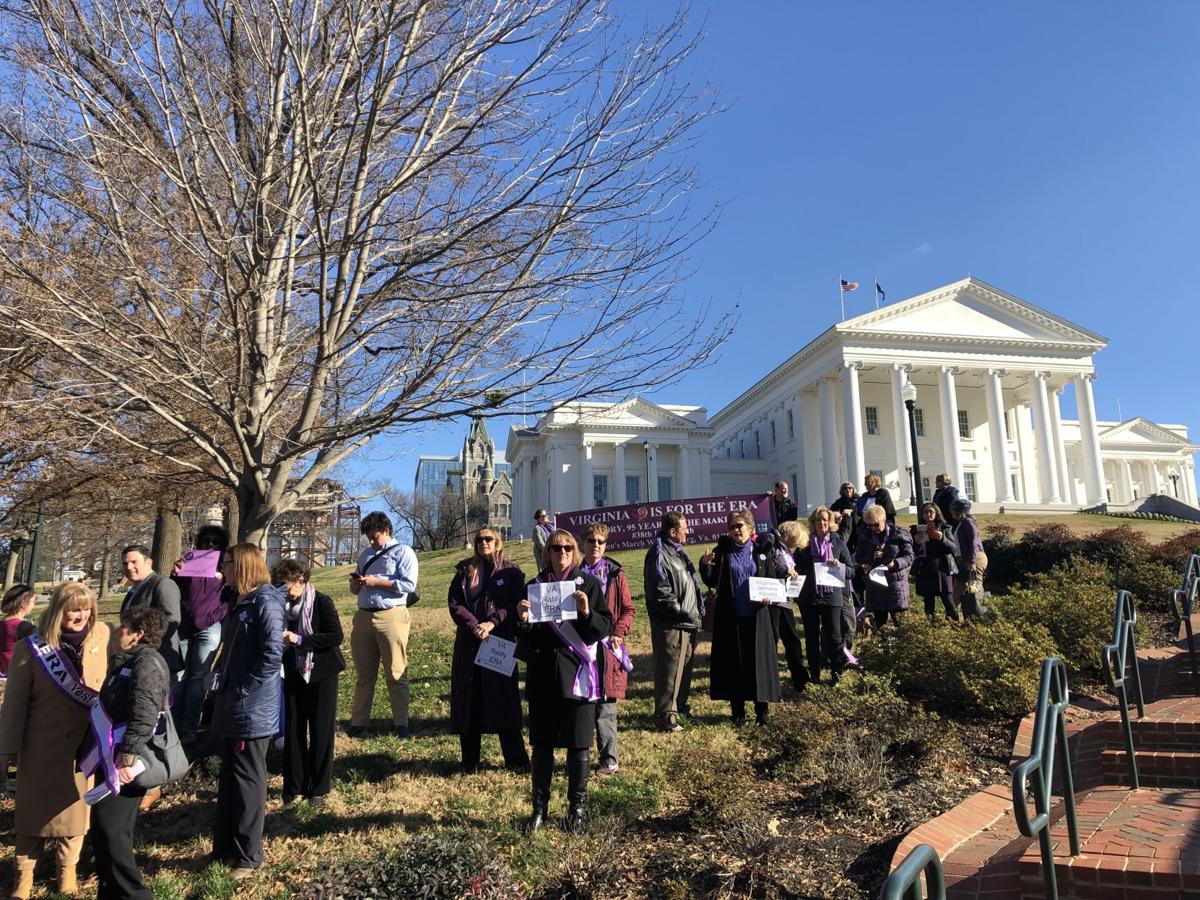 People who want the Virginia General Assembly to pass a resolution ratifying the Equal Rights Amendment gather outside the state Capitol on Wednesday, Jan. 9, 2019, the opening day of the General Assembly session. (Patrick Wilson\Times-Dispatch)

Supporters of ratifying the federal Equal Rights Amendment made their presence felt Wednesday on the opening day of the 2019 General Assembly session, hosting a news conference and holding signs as they greeted people outside the Capitol.

Resolutions for the Virginia General Assembly to ratify the ERA did not get out of GOP-controlled committees last year, even with ERA supporters packing committee rooms and pressuring lawmakers to take action. Since then, ERA supporters have done a flurry of lobbying across the state, including a bus tour, and enlisted support from more Republicans in anticipation of a major push this year.

On Wednesday afternoon, two Republicans joined Democrats on a Senate committee to vote in favor of the ERA, sending it to the full Senate.

The proposed federal amendment says: “Equality of rights under the law shall not be denied or abridged by the United States or by any state on account of sex.” It provides that Congress shall have the power to enforce its provisions “by appropriate legislation.”

Virginia is among the states that never ratified the ERA. Although supporters and opponents are in dispute over whether the deadline to do so has expired, there’s a major push for Virginia to this year become the 38th state to ratify the amendment — the ERA requires the backing of 38 of the 50 states to be added to the Constitution.

Ratification would need majority approval from the state House and Senate, and a copy would be sent to the U.S. archivist.

Kati Hornung, an activist helping to lead the push for ratification, said one of her goals is to counteract “misinformation” by the Family Foundation, a conservative organization that opposes abortion and lobbies on social causes.

“I know a lot of Republicans support” the ERA, Hornung said after a Wednesday morning news conference held by lawmakers and ERA supporters.

The Family Foundation will hold a news conference Thursday to oppose the ERA.

The Senate Privileges and Elections Committee on Wednesday afternoon passed a resolution in support of ratifying the ERA, by an 8-6 vote.

It is sponsored by Sen. Glen Sturtevant, R-Richmond. Supporters expect the ERA to pass the Senate, where it has been approved five times in the past, and are putting focus on the House of Delegates, where the outcome is uncertain.

Sturtevant, in his first term, said he has spent considerable time studying the amendment.

“Equality between men and women is a core and fundamental American value that we all agree on,” he said. Despite protections in federal and state law, those laws, and state constitutions, can be changed, he said.

“Some do not feel that the U.S. Constitution currently protects equality between men and women.”

He quoted the late Supreme Court Justice Antonin Scalia as saying the U.S. Constitution did not prohibit discrimination on the basis of sex.

“So that’s why it’s important that we include the protection of this American value in the U.S. Constitution like the other American values that are preserved and protected there,” Sturtevant said.

“My expectation is if we make it to the floor [of the House], we’ll see a lot of folks sign on,” Hornung said.

All 140 seats in the legislature are up for election this year, and Republicans are defending one-vote majorities in each chamber following a 15-seat pickup by Democrats in the House in 2017. Republicans’ edge in the House will become 51-48 when Del. Jennifer Boysko, D-Fairfax, is sworn in to her state Senate seat later this week.

“It was first introduced 96 years ago,” Del. Jennifer Carroll Foy, D-Prince William, said at the news conference. “That’s 96 years of marches, of rallies, of protests.”

Carroll Foy, one of the first female graduates of Virginia Military Institute, recalled how VMI spent millions of dollars trying to keep women out of the school before they were finally allowed in 1996.

“I want people to understand the importance of the Equal Rights Amendment,” she said.

“When you enshrine my fundamental right as a human being equal to men, well that is the only thing that’s acceptable, and we will not stop fighting until that happens. We will not be quiet, we will not take a seat, we will not wait our turn.”

Amy McInerny, director of the Respect Life Office of the Catholic Diocese of Arlington, testified before the Senate committee that women had achieved goals without the ERA and said “the ERA is DOA and has been since 1982.”

“Please be aware that harm may flow from enacting this. A flurry of litigation could ensue, which would be costly and damaging to our state.”

Virginia is one of the states that never ratified the Equal Rights Amendment and thus part of the reason it never made it into the U.S. Constitution.

ERA supporters stood under a portrait of Thomas Jefferson on Wednesday at the Pocahontas Building.

Del. Jennifer Carroll Foy, D-Prince William, sponsor of a House measure to ratify the Equal Rights Amendment, waved to ERA supporters outside the state Capitol in Richmond in this 2019 photo.

People who want the Virginia General Assembly to pass a resolution ratifying the Equal Rights Amendment gather outside the state Capitol on Wednesday, Jan. 9, 2019, the opening day of the General Assembly session. (Patrick Wilson\Times-Dispatch)