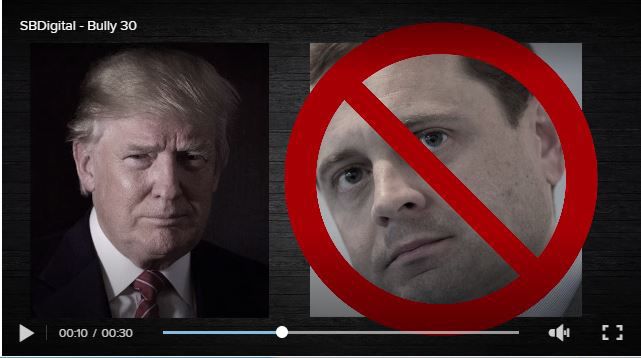 A screenshot from a digital ad launched by a mysterious PAC, Virginians for a Better Future, that is supporting Lt. Gov. Ralph Northam and opposing former congressman Tom Perriello in the final week of the Democratic gubernatorial primary. The negative ad drew a rebuke from Northam. 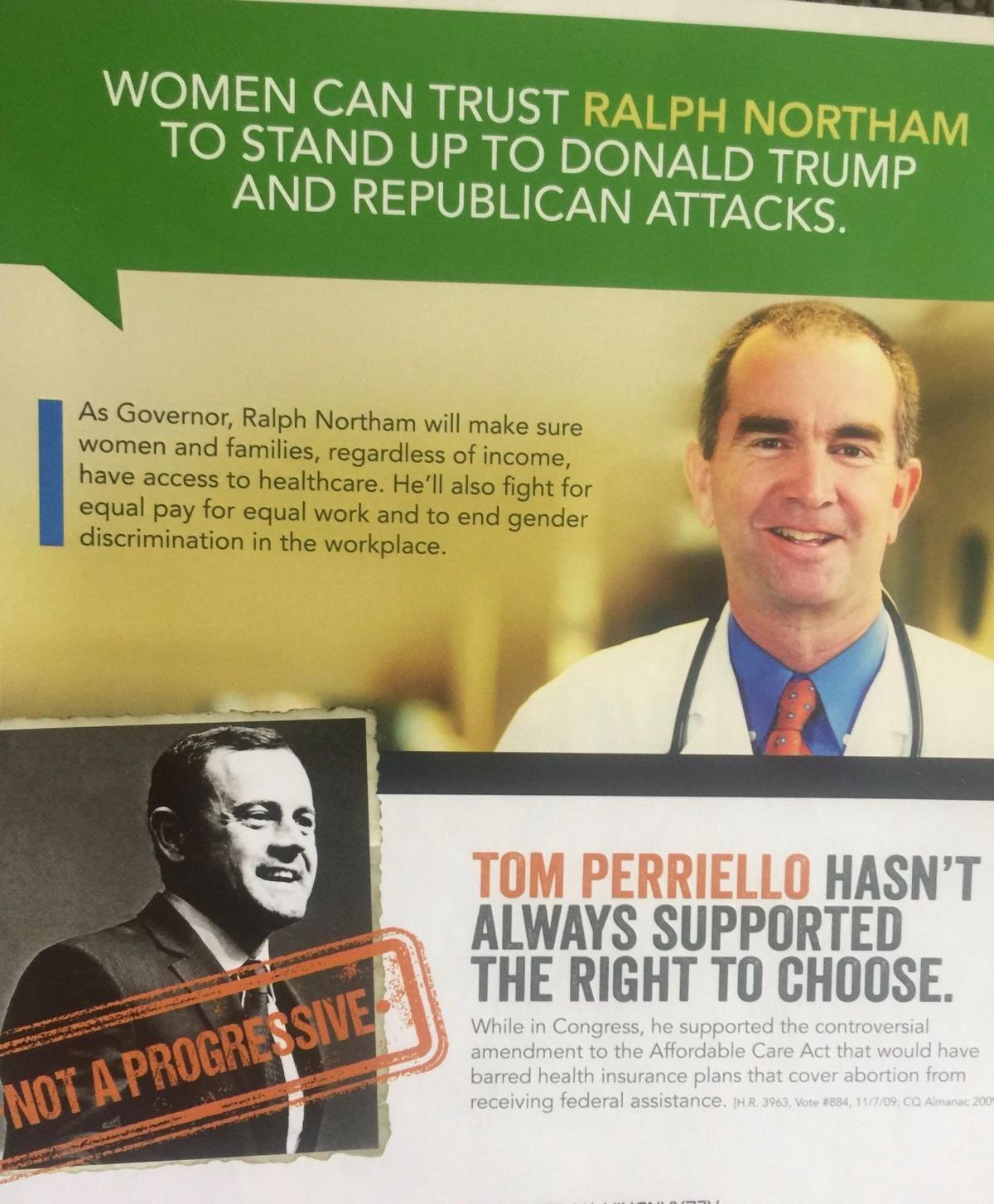 The secretive nonprofit Virginians for a Better Future mailed an unknown number of fliers to Virginia voters to support Lt. Gov Ralph Northam and attack former congressman Tom Perriello in the closing days of the Democratic gubernatorial primary. The source of the $184,000 behind the campaign may never be disclosed because the group claims it is not a PAC.

After filing its legal paperwork in Delaware two weeks before Virginia’s gubernatorial primaries, Virginians for a Better Future quickly got to work promoting its idea of social welfare.

On its founding document, filed in a state with famously relaxed incorporation laws that serve as a magnet for shell companies, the tax-exempt nonprofit described its mission as “supporting public policies that promote the ability of Virginians to prosper and thrive,” particularly in health care, education and employment.

With both Democratic campaigns spending millions on TV advertising, no one has suggested the Virginians for a Better Future ads — which painted Perriello as a phony progressive who couldn’t be trusted on abortion rights — tipped the outcome.

Perriello called the ad campaign “the kind of thing that correctly disgusts people about politics,” but he seemed to quickly move on from it after the primary and said he’ll fully support Northam.

But with Perriello running an outsider, anti-corporate campaign that put him at odds with the Democratic establishment and business interests behind a pair of natural-gas pipelines Perriello opposed, the ads raised the question of who exactly spent a sizable amount of money on negative digital ads, mailers and robocalls despite a public rebuke from Northam.

Because the group is organized in a way that allows maximum secrecy, the identity of the donor or donors behind the ad campaign might never be disclosed.

“We’re trying to keep a very low profile on this,” Michael McShane, a little-known Democratic consultant from the Charlottesville area who serves as the group’s only public face, said in a brief interview last month.

McShane, who signed his name on official records as the group’s treasurer and incorporator, abruptly ended the phone call after being asked whether the group would disclose its donors. In follow-up messages, he said the organization has filed all paperwork required by the state.

The limited paper trail that exists, made up mainly of a series of independent spending reports filed with the state Department of Elections, points to a larger network of activity beyond McShane’s Keswick address.

Several reports had markings showing they were faxed from the D.C. office of heavyweight law firm Skadden, Arps, Slate, Meagher & Flom. Another came from a Chicago area code with the initials “SASMF.” A report faxed June 10 had a cover sheet from an even more mysterious locale: a UPS Store in a strip mall outside Boston. Skadden Arps did not respond to a request for comment.

NARAL Pro-Choice Virginia, an abortion-rights group that backed Northam, has denied involvement in the ad campaign, as has Dominion Energy, the politically potent utility Perriello crossed with his anti-pipeline stance and calls to reduce the influence of energy monopolies.

Because the organization is incorporated as a social welfare group, or 501(c)(4), with a larger advocacy mission beyond the governor’s race, Virginians for a Better Future is exempt from the campaign finance disclosure rules that apply to candidates and political action committees.

The murkiness surrounding 501(c)(4) groups was a key element of the controversy regarding the U.S. Supreme Court’s Citizens United decision, which allowed corporations and nonprofits to freely spend on political communications.

The gray area between social advocacy and politics was also at the center of the 2013 IRS scandal over tea party groups being targeted for extra scrutiny.

Other states have taken steps to close reporting loopholes for 501(c)(4)s, but a Republican-sponsored bill to force social welfare groups to disclose their donors failed this year in the Virginia General Assembly.

In April, Northam called for legislation to fix the “dark money” issue, pointing to a 2015 law passed in Montana that requires all groups to disclose their funding sources regardless of tax status if they spend money to try to sway an election within 60 days of the start of voting.

Sen. William R. DeSteph Jr., R-Virginia Beach, said he sponsored the 501(c)(4) bill after seeing secretive spending in Virginia Beach’s light rail referendum last year, but saw that it had no chance of passing because Republicans and Democrats alike are “tied to things like this.”

The National Rifle Association is organized as a 501(c)(4), as is the political advocacy arm of Planned Parenthood.

“I had a bunch of folks come out and say you don’t realize what you’re doing,” DeSteph said. “I said yeah actually I do. That’s why I’m still pushing to do it.”

State elections officials did not answer repeated inquiries about whether Virginians for a Better Future will have to disclose its donors, but confirmed that the group has not filed a statement of organization, an identifying document required of any PAC that expects to spend more than $200 to influence a state election.

The department also did not respond to questions about whether the state has any role or policies related to reviewing the validity of groups spending in Virginia elections while claiming 501(c)(4) status. McShane insisted the group is a 501(c)(4), not a PAC.

The 501(c)(4) category allows groups to promote their views on civic issues and engage in some political advocacy, as long as influencing elections and running ads for or against named candidates is not the organization’s “primary activity.”

Perriello also benefited from the secrecy surrounding 501(c)(4)s. He received $380,000 in contributions from the New York-based Avaaz Foundation, an international advocacy group he co-founded. Avaaz also does not have to reveal the source of the money it gave to Perriello, though it clearly has a broader focus beyond intervening in Virginia elections.

If Virginians for a Better Future has plans for advocacy beyond the Democratic primary, they’re hard to find.

The group’s austere Facebook page consists only of links to pro-Northam content, all posted within a 15-minute span on June 2. The page has been idle ever since. The group’s website features more pro-Northam links, a digital video ad and a link to a state elections website that helps voters find their polling place.

The incorporation paperwork in Delaware was dated May 31. The first of four independent expenditure reports was filed with Virginia officials on June 4, and the reports continued to come in until the day before the June 13 primary.

The spending reports do not reveal where the group’s money came from, but they show where it went. The organization paid three political advertising firms to design and execute the campaign, and each company has ties to Virginia’s Democratic establishment.

Zuzenak, who was paid $13,500 by McAuliffe’s PAC in December, has not responded to requests for comment. The PAC denied involvement.

“That type of effort had no place in a Democratic primary between two fantastic candidates,” said Common Good VA spokeswoman Crystal Carson. “We had no knowledge of or coordination with the group.”

SB Digital, a D.C. firm identified in the spending reports as Switchboard Communications, received around $100,000 for the digital ad component. The company employs Sam Sterling, a former aide to Senate Minority Leader Richard L. Saslaw, D-Fairfax, who vigorously supported Northam and bashed Perriello during the primary.

Saslaw has also denied any involvement in the ad campaign and said he does not know who’s behind Virginians for a Better Future.

The Sexton Group, a communications firm based in Chicago, was paid roughly $25,000 to handle the robocalls. The company’s website lists Eric Payne, a former Democratic Party of Virginia employee, as its data manager.

In an interview, Payne said he no longer works with the Sexton Group and was not involved in the calls.

On June 7, Northam sent an email to McShane asking Virginians for a Better Future to scrap its plans to go negative on Perriello, but that request seemed to have little impact.

DeSteph said he will continue to pursue a state-level fix. Ultimately, he said, it’s up to the IRS or federal lawmakers to clarify what has become “another way to hide money.”

A screenshot from a digital ad launched by a mysterious PAC, Virginians for a Better Future, that is supporting Lt. Gov. Ralph Northam and opposing former congressman Tom Perriello in the final week of the Democratic gubernatorial primary. The negative ad drew a rebuke from Northam.

The secretive nonprofit Virginians for a Better Future mailed an unknown number of fliers to Virginia voters to support Lt. Gov Ralph Northam and attack former congressman Tom Perriello in the closing days of the Democratic gubernatorial primary. The source of the $184,000 behind the campaign may never be disclosed because the group claims it is not a PAC.