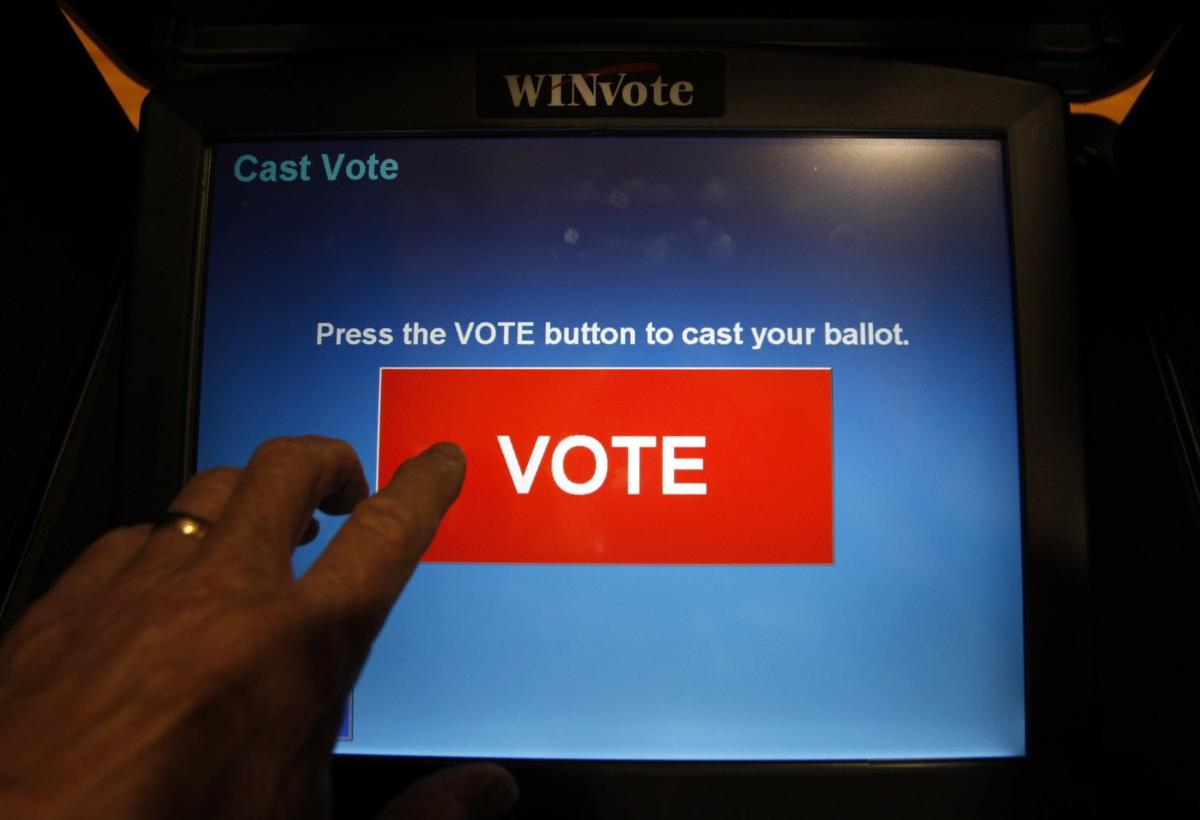 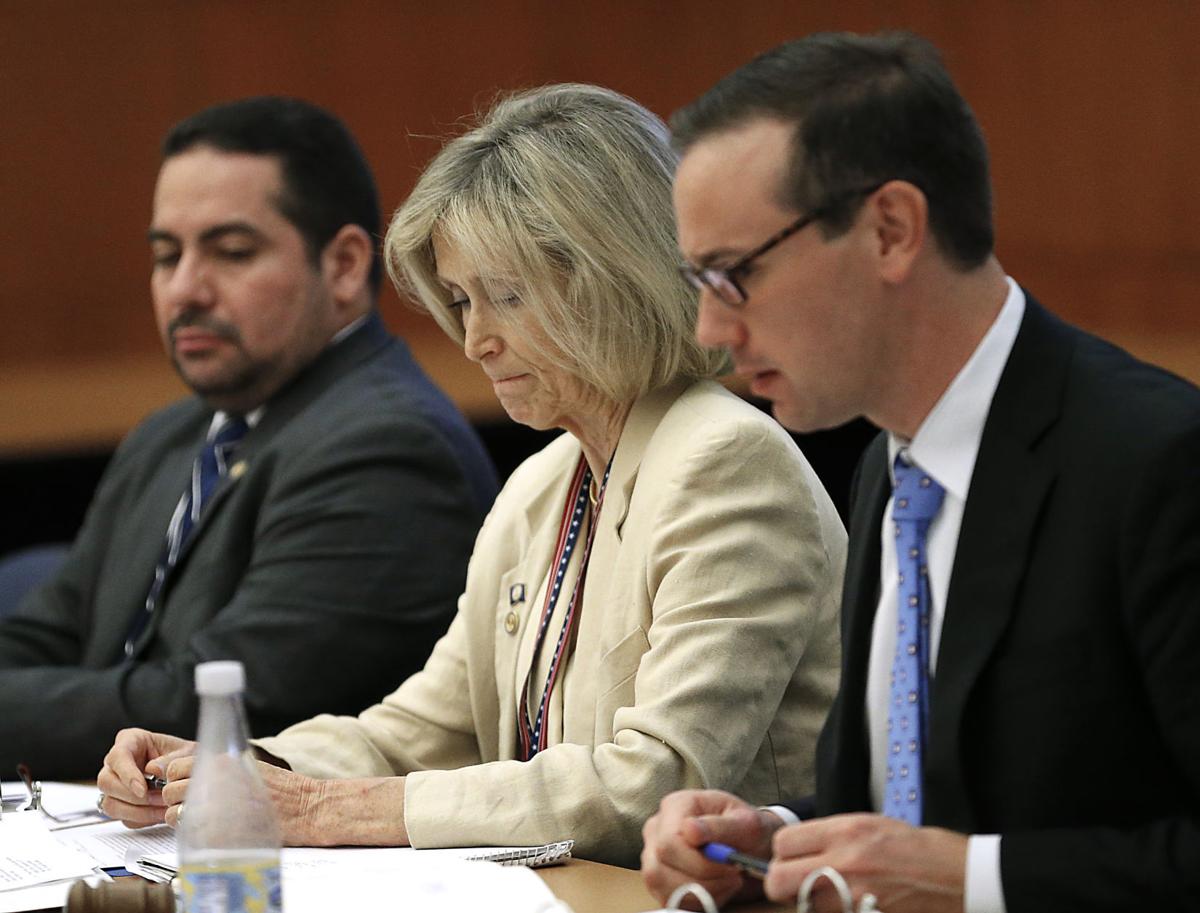 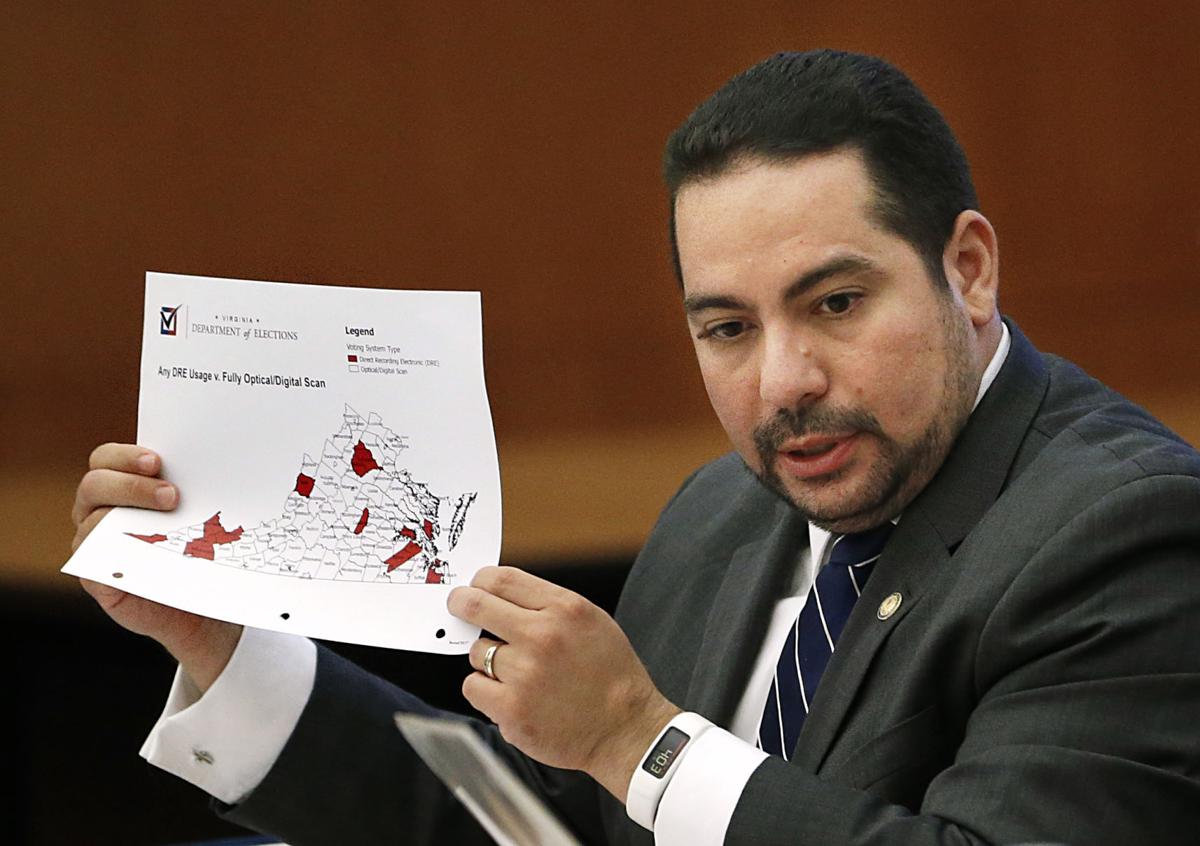 (L-R) Commissioner Edgardo Cortés holds up a map showing regions that are using DRE's during a Virginia State Board of Elections meeting Friday, September 8, 2017. The board voted to discontinue the touchscreen voting machines throughout the state due to potential security vulnerabilities, forcing 22 cities and counties to buy and install new equipment just weeks before voting begins for the November gubernatorial election.

The Virginia State Board of Elections voted Friday to discontinue use of all touch-screen voting machines throughout the state because of potential security vulnerabilities, forcing 22 cities and counties to scramble to find new equipment just weeks before voting begins for the November gubernatorial election.

Behind closed doors at an emergency meeting in Richmond on Friday afternoon, the board heard about specific vulnerabilities identified after a cybersecurity conference this summer in Las Vegas, where hackers showed they could break into voting machines with relative ease.

After the July Defcon conference, Virginia’s Department of Elections asked the state’s IT agency to review the security of touch screens still in use in the state. Details of that review were kept confidential, but they caused the elections board to speed up the end of touch screens, which were already scheduled to be phased out of Virginia elections by 2020.

Most Virginia localities — including the city of Richmond and Henrico, Chesterfield and Hanover counties — have already transitioned to optical-scan systems, in which voters fill out bubbles on a paper ballot that is fed into a scanner.

In a memo on touch-screen machines prepared for the board, the Department of Elections said the Virginia Information Technologies Agency, or VITA, found that “each device analyzed exhibited material risks to the integrity or availability of the election process.”

The password for a touch-screen machine used in Virginia was publicized after the July hacking conference, the memo said, and one report indicated that one vendor with machines in Virginia uses a single password for all machines. The memo also notes that, unlike optical systems, touch screens leave no paper trail that can be used in post-election audits.

Before last year’s presidential election, Virginia officials stressed that all touch-screen machines were secure because they aren’t connected to the Internet.

Several localities raised misgivings about the move, defending the integrity of their systems and arguing that they’ll now have little time to shop around for the new equipment to fulfill an unfunded mandate.

The cities and counties that still use touch screens are scattered throughout the state. Most are rural localities, including several in far Southwest Virginia, that may not have been able to afford to buy optical-scan machines after state officials made clear that touch screens should be on the way out.

In an interview, Elections Commissioner Edgardo Cortés acknowledged that the short time frame could put localities under the gun. However, 10 of the 22 localities that still use touch screens, either as their primary voting method or for more limited uses, have already begun buying new equipment, Cortés said. That leaves 12 that will have to start from scratch, but Cortés said the rapid swap is “doable” and worth the “hiccups” that may come with new equipment.

“The risk of keeping the old equipment in place is much greater than implementing a new system,” Cortés said.

Officials did not immediately provide a full list of the 12 localities likely to be most strained by the decision. The 13 localities with no plans to buy new equipment as of Thursday night, one of which apparently came up with a plan before Friday’s meeting, contained roughly 190,000 of the state’s 5 million active voters.

Cortés noted that several localities transitioned away from WinVote touch-screen machines after a similar 2015 decertification just 55 days before the June primary election that year. The state is 60 days out from the Nov. 7 election for governor, lieutenant governor and attorney general, as well as all 100 seats in the House of Delegates.

In letters to the board, several local officials acknowledged the heightened sensitivities to possible Russian hacking, but argued an eleventh-hour equipment swap may be an overreaction.

“To decertify this equipment prior to this November’s election would be like screaming ‘fire’ in a crowded movie theatre,” Norfolk election officials wrote in a letter to the state. “We want a smooth and successful gubernatorial election. We do not want to discourage the integrity of our voting process or systems or open the door for litigation.”

The Virginia Association of Counties sent the board a letter saying many localities were concerned about the potential for “unanticipated expenditures” in the middle of their budget years. The organization also passed along a low-tech security solution proposed by Washington County: sealing the machines with “tamper-proof tape” and having sheriff’s deputies escort them to polling places.

Elections board Chairman James Alcorn said he and his colleagues were faced with two options: go through the logistical difficulty of swapping out the machines or plow ahead with equipment that may not be secure.

“Neither one of those are necessarily ideal situations to be in,” Alcorn said.

In an interview before the meeting, board member Clara Belle Wheeler said she was concerned scrapping the machines could “disenfranchise” voters by sowing confusion with little time to educate election workers or voters. But after hearing the security concerns in the closed session, Wheeler announced she would vote to decommission the machines.

“It was enlightening,” Wheeler said.

Though the vote at the hastily arranged board meeting was unanimous, Wheeler said she was concerned with the last-minute nature of the meeting. Board member Singleton McAllister was traveling in California on Friday and had to dial in to the meeting remotely, and Wheeler said she didn’t hear from anyone in state government about the issue until Tuesday.

“This board member can’t function without information,” Wheeler said. “And I didn’t have it on this subject.”

Culpeper County Registrar James Clements, who estimated replacing machines could cost his county up to $250,000, said he has no concerns about his equipment being susceptible to hacking. But Clements said before the meeting that if the board voted to scrap the machines, Culpeper would respond as needed.

“I’ve sworn an oath to do it. So it’s certainly doable,” Clements said. “But is it consistent with the mission of my office? Or even the department’s mission? That’s open to interpretation.”

(L-R) Commissioner Edgardo Cortés holds up a map showing regions that are using DRE's during a Virginia State Board of Elections meeting Friday, September 8, 2017. The board voted to discontinue the touchscreen voting machines throughout the state due to potential security vulnerabilities, forcing 22 cities and counties to buy and install new equipment just weeks before voting begins for the November gubernatorial election.