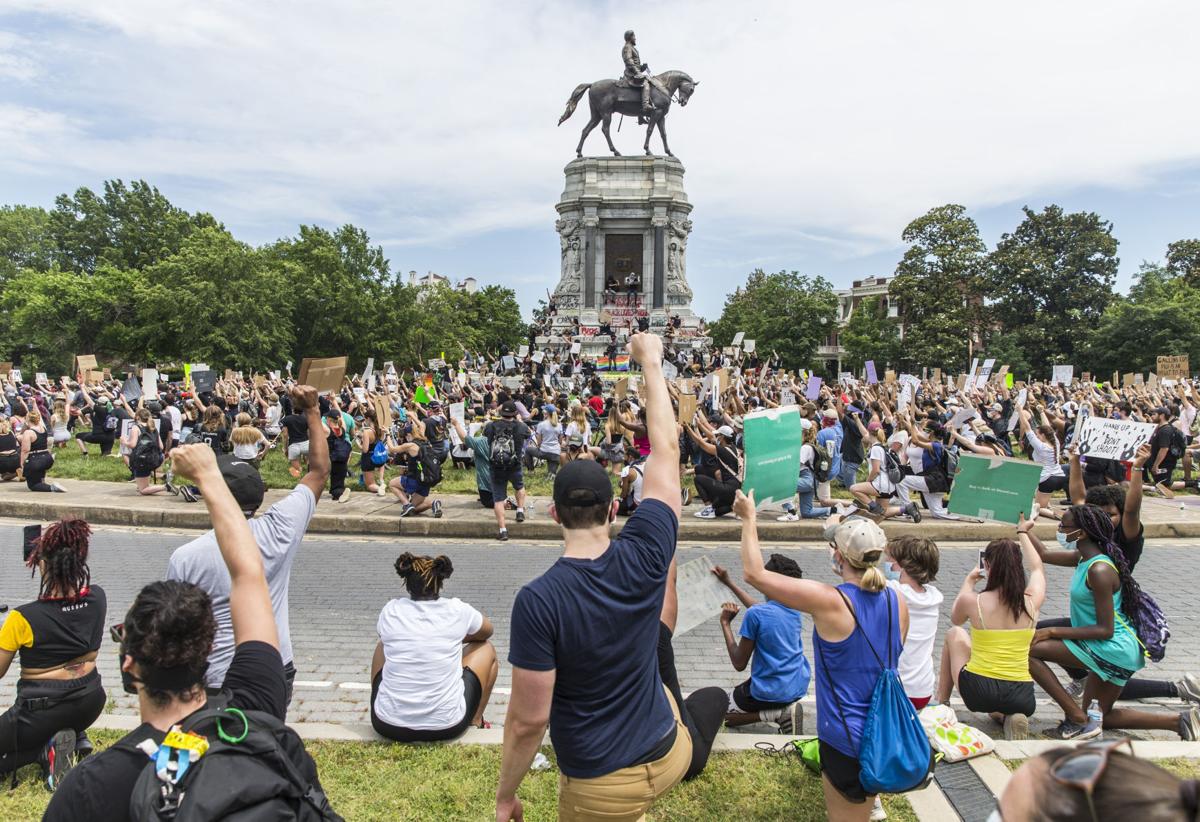 Protesters gathered around the state-owned Robert E. Lee monument in Richmond on Wednesday. Gov. Ralph Northam will order the removal of the statue from its pedestal. 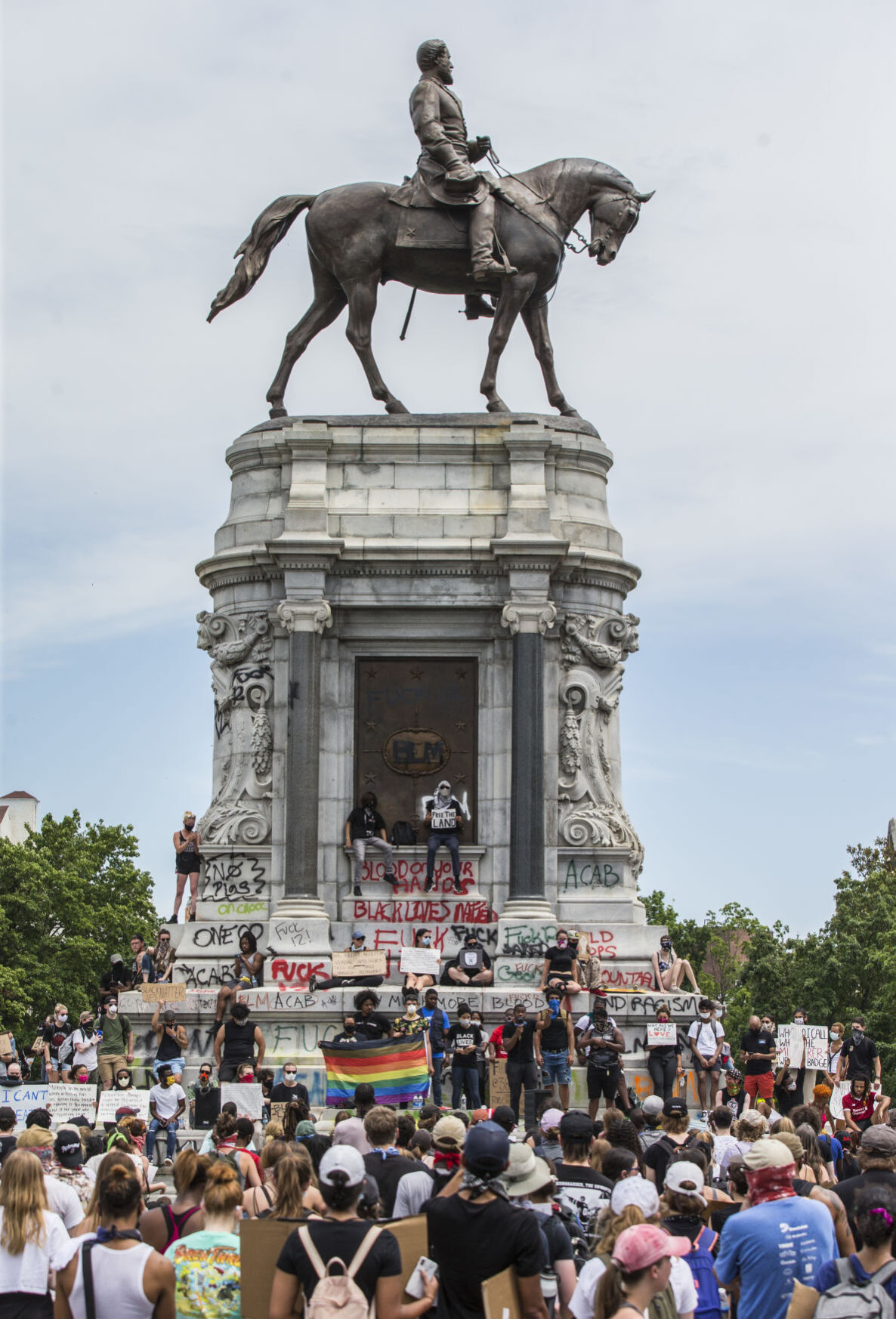 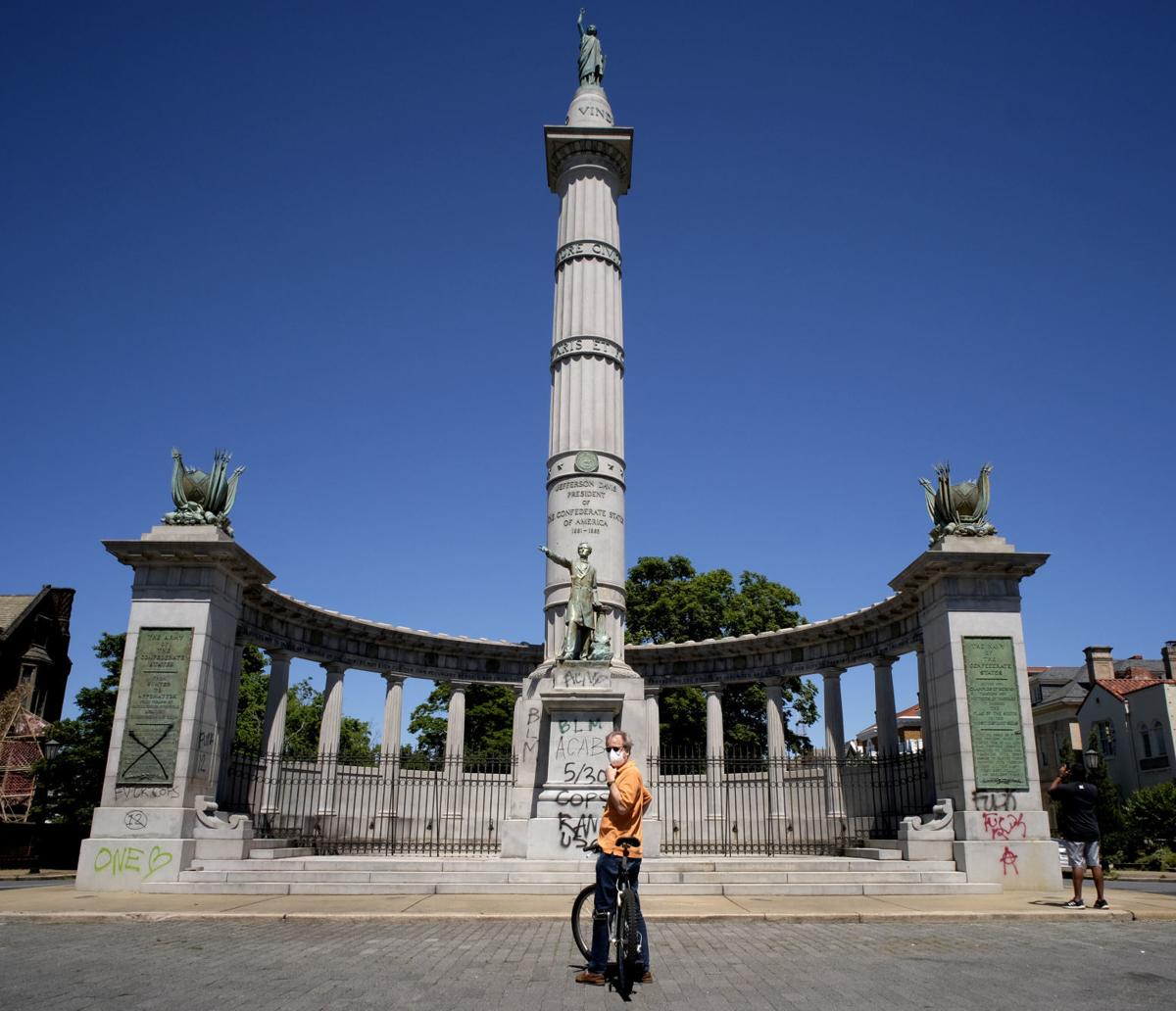 A cyclist pauses in front of the Jefferson Davis monument on Monument Avenue in Richmond on Sunday, May 31, 2020. Protesters the night before had defaced this and the other statues on the historic street. 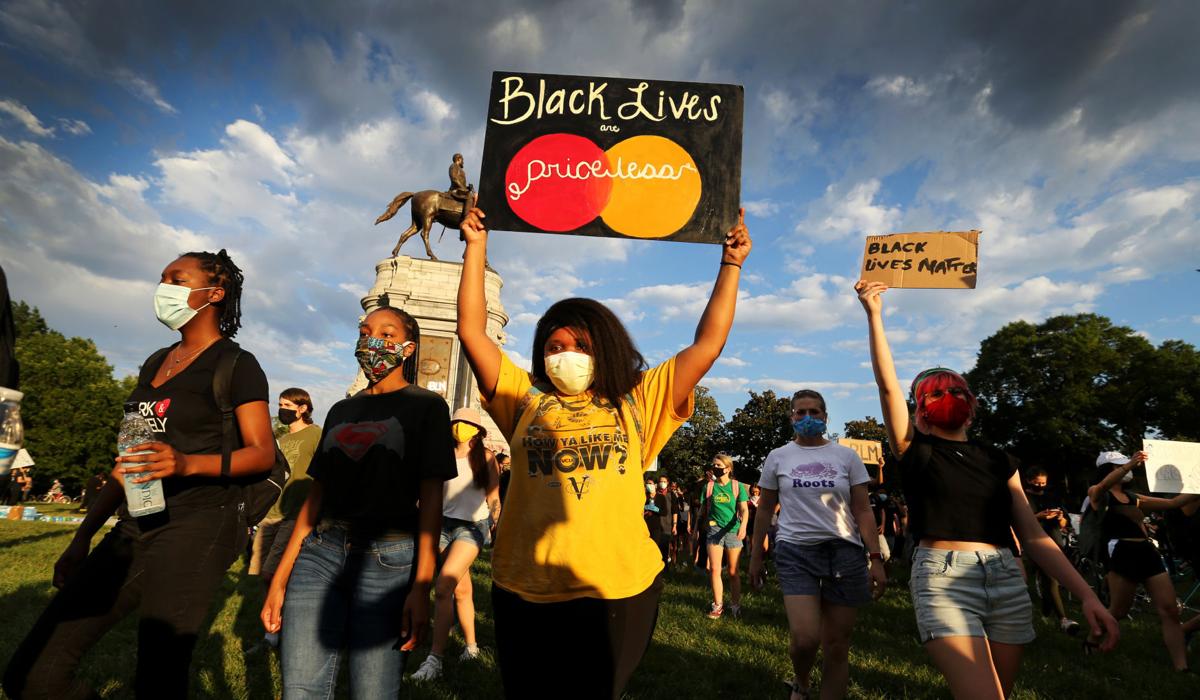 Protesters held signs while walking away from the Lee statue on Wednesday. Two nights earlier, during ongoing protests, police fired tear gas on hundreds of demonstrators gathered peacefully there.

Growing demonstrations against racism and police brutality in Richmond have unfolded beneath the country’s most iconic Confederate monuments.

Protesters decrying white supremacy have chanted for city leaders to tear them down.

Northam is poised to announce on Thursday plans to remove the statue of Confederate Gen. Robert E. Lee from Monument Avenue. Stoney said he wants four other famous statues honoring the Confederacy removed from the strip in the wake of Black Lives Matter protests that already have left an indelible mark on a changing city.

The news came on the sixth day of local demonstrations over the Minneapolis police killing of George Floyd, a 46-year-old African American man. The death has spurred nationwide protests over police violence targeting African Americans.

Locally, it also has reignited the push to remove Confederate iconography.

“I appreciate the recommendations of the Monument Avenue Commission — those were the appropriate recommendations at the time,” Stoney said in a statement issued Wednesday afternoon, referencing a city panel that previously called for contextualizing most of the statues in place.

“But times have changed, and removing these statues will allow the healing process to begin for so many Black Richmonders and Virginians. Richmond is no longer the Capital of the Confederacy — it is filled with diversity and love for all — and we need to demonstrate that.”

Shortly after Stoney made the announcement, news broke that Gov. Ralph Northam would detail plans Thursday to remove the Robert E. Lee monument, which the state owns. Earlier this week, Northam said he would “follow the lead of the City Council and ... the people that live in Richmond.”

Northam will order the removal of the statue from its stone pedestal. The statue will be removed and stored while the administration makes a decision about its ultimate fate, with public input.

Removing the four locally controlled statues will require approval from the Richmond City Council. Stoney’s ordinance said he and Councilman Michael Jones, a leading critic of the statues locally, will bring forward an ordinance to do that July 1.

State law requires localities to publish notice of their intent in a newspaper and hold a public hearing. It also permits localities to hold a nonbinding referendum regarding the monuments.

If the City Council votes to remove, relocate, contextualize, or cover the monuments, it must have a 30-day waiting period in which it offers to relocate the memorials to any museum, historical society or military battlefield, among others.

Richmond’s council twice voted against requesting control of the statues from the state. It changed course earlier this year, after Democrats took control of the Virginia General Assembly.

Several council members said at the time they wanted to follow guidance from the city’s Monument Avenue Commission. The panel recommended removing the Davis monument and various ways to “contextualize” the others.

While some on the council have signaled they are open to altering the statues, removal is a different question.

Monument Avenue is a National Historic Landmark. Residents have cited the designation to push back against efforts to alter the famous street or its towering monuments.

Councilwoman Kimberly Gray, a candidate for mayor who represents the area, has said in the past that she does not support spending tax dollars to remove the statues. She opposed two attempts to request control of the statues from the state. She did not return a request for comment Wednesday.

At the Lee monument Wednesday afternoon, Jones looked on as hundreds gathered there before marching through downtown. Jones has called the statues symbols of white supremacy and a source of pain for African Americans. He faced death threats for leading the push to request local control of them.

The events of the last week have made clear that the council must act, he said.

“We need to put pressure on the others on council to listen to this generation of people,” he said in an interview Wednesday.

Two nights earlier, police fired tear gas on hundreds of protesters gathered peacefully at the Lee monument. Many stood with their hands raised above their heads. Police initially defended the show of force with a publicly issued lie.

Stoney and Police Chief Will Smith issued a public apology the next day and endured a tongue-lashing from angry residents and activists, who called for the firings of Smith, as well as the officers who launched the gas and targeted protesters with pepper spray.

Kaya Lee, 18, was standing with demonstrators when police fired the gas.

She returned Wednesday in cap and gown on what was her graduation day from Maggie L. Walker Governor’s School. Holding a sign that read “I can’t breathe” she posed for a photo with her mother, Mavis.

The statues should come down, but the graffiti should remain as a reminder of the demonstrations, Kaya Lee said.

Many messages written in paint on the monuments’ use profanity to criticize the police. Alongside them, others espouse hope.

“This is for Marcus,” read one, a reference to Marcus-David Peters, the black school teacher shot and killed by Richmond Police in 2018.

“I am not my ancestors,” another proclaimed.

Richmond’s Department of Parks, Recreation and Community Facilities is responsible for maintaining the city-controlled statues. A spokeswoman said the department had no timeline for cleaning graffiti off them and did not know how much it would cost.

Chris Morrison, a 38-year-old Hanover County resident, brought a bucket of water, dish soap and brushes to try scrubbing the graffiti from the Lee monument Wednesday.

He said he didn’t want the profanities to remain plainly visible. Some demonstrators heckled him, but most ignored him, he said.

Morrison said he believed the monuments should remain.

“You learn from history, and they should not be removed,” he said. “If you erase history, history can repeat itself.”

After trying for a while, he couldn’t scrub the graffiti from the pedestal. Instead, he found some chalk and began blotting out what messages he could. After a few hours, he decided to leave as demonstrators began gathering for another march.

Not long after Morrison gave up, Timesha Harris sat on the other side of the monument holding pink chalk. She drew an infinity symbol.

Asked what it represented to her, she said: “That this isn’t going to stop until the government cares about us.”

It was the first time the 19-year-old Prince George County resident had seen the monument.

In its current state, she said, it reminded her of the Berlin Wall.

UPDATED: 'This is the beginning, y'all': Marchers converge at Robert E. Lee statue as talks of monument removal escalate

'It's been happening all along': Panel of Richmond law enforcement leaders discuss George Floyd killing

'Too important for me to sit at home': Protesters balance push for racial justice with COVID-19's spread

Protesters say the need to show up and fight racial injustice and police brutality outweighs the risk of getting sick.

At least 125 press freedom violations nationwide have been reported since Friday. Two were in Richmond

News reporters and photographers understand the inherent potential risk of covering something as unpredictable as a large protest, with emotio…

As Richmond marked its sixth day of demonstrations against police brutality that has roiled the nation, protests expanded into the city’s subu…

WATCH NOW: Videos from Wednesday's peaceful marches and protests throughout the Richmond area

Protesters march and drive down West Main Street in the Fan and through Carytown in Richmond, Va., Wed. night, June 3, 2020.

Protesters gathered around the state-owned Robert E. Lee monument in Richmond on Wednesday. Gov. Ralph Northam will order the removal of the statue from its pedestal.

A cyclist pauses in front of the Jefferson Davis monument on Monument Avenue in Richmond on Sunday, May 31, 2020. Protesters the night before had defaced this and the other statues on the historic street.

Protesters held signs while walking away from the Lee statue on Wednesday. Two nights earlier, during ongoing protests, police fired tear gas on hundreds of demonstrators gathered peacefully there.