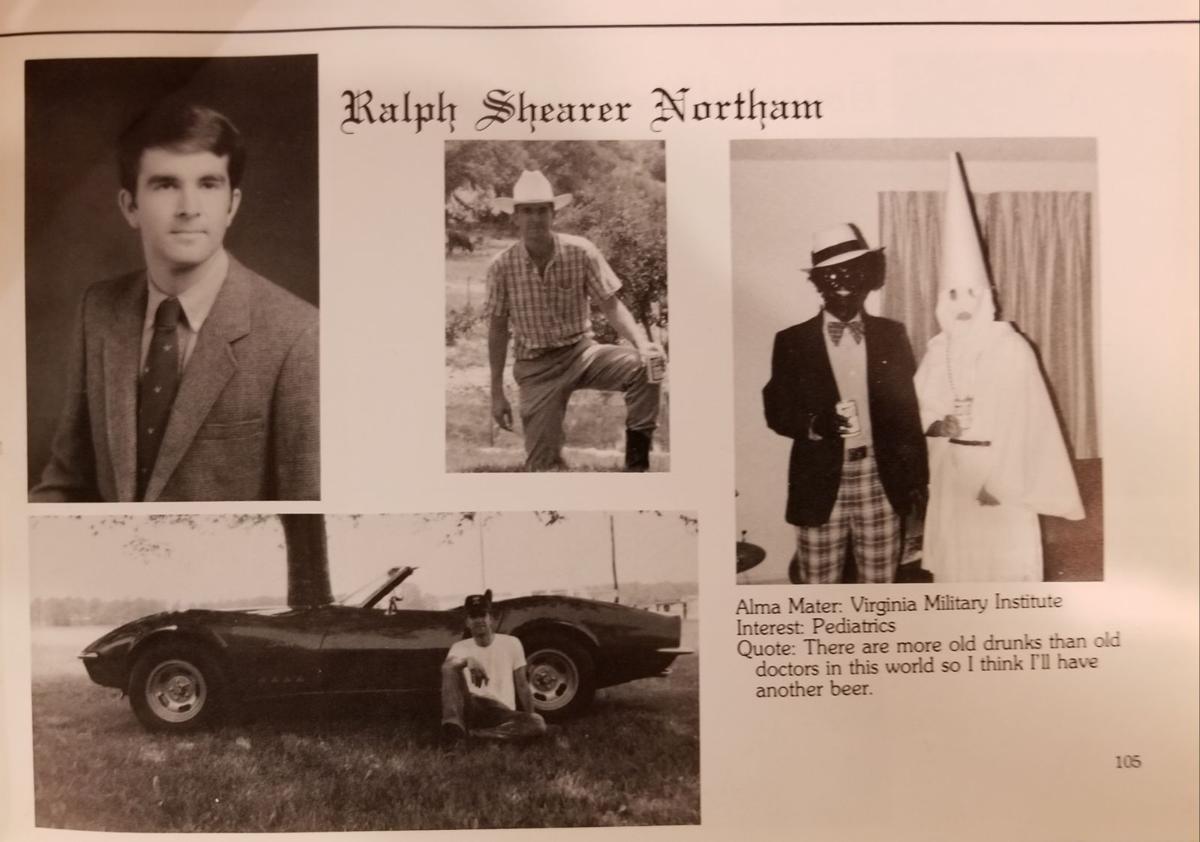 A page from the 1984 Eastern Virginia Medical School yearbook photographed by the Richmond Times-Dispatch, Feb. 1, 2019. 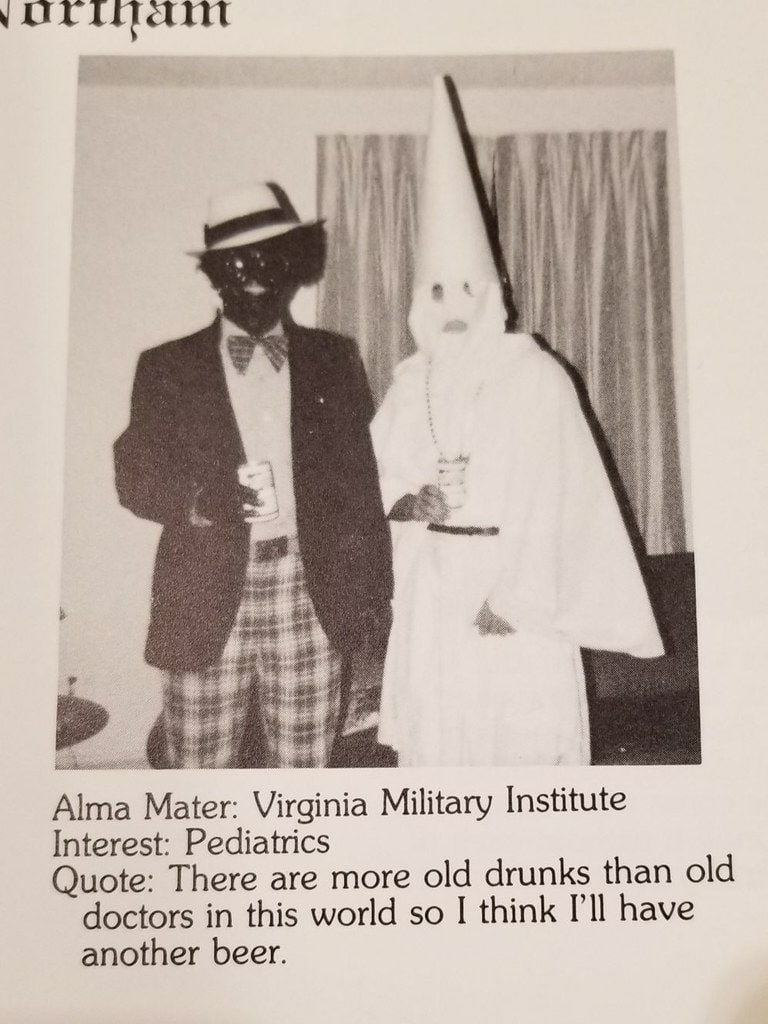 Gov. Ralph Northam said Saturday that he is not posing in this photo.

Democratic Gov. Ralph Northam apologized Friday after admitting he appeared in a racist photo in the 1984 Eastern Virginia Medical School yearbook depicting one person in blackface and another in a Ku Klux Klan outfit. The photo was met by a cascade of calls for his resignation from Democratic allies ranging from the Virginia Legislative Black Caucus to Democratic presidential candidates.

The news rocked Northam's administration and he resisted calls for his resignation, issuing a video statement saying he wanted to serve out his four-year term. Virginia's two Democratic U.S. senators, however, Mark Warner and Tim Kaine, each issued statements saying Northam should carefully consider how he moves forward.

"This photo is shocking and deeply offensive, all the more so because of Virginia's long and painful history of racism and violence toward African Americans," Warner's statement said. "The Governor must now listen to the people and communities he has hurt, and carefully consider what comes next."

Northam acknowledged the photograph was "clearly racist and offensive" and added, “I am deeply sorry for the decision I made to appear as I did in this photo and for the hurt that decision caused then and now."

If Northam were to resign, Lt. Gov. Justin Fairfax would become governor. Fairfax is a Democrat.

The right-wing blog Big League Politics first published the photo Friday, saying it showed Northam and a friend – one in blackface and one in the Klan outfit.

The Virginia Legislative Black Caucus issued a statement saying the photo was "disgusting, reprehensible, and offensive. We feel complete betrayal."

"These pictures rip off the scabs of an excruciatingly painful history and are a piercing reminder of this nation's sins."

State Sen. Bryce Reeves, R-Spotsylvania, was one of the first to call for resignation, issuing an afternoon statement saying he hoped the picture was "inaccurate," but that Northam should resign immediately if it was real.

Taikein Cooper, who is black and is the chairman of the Prince Edward Democratic Committee, also called on Northam to resign. "You can't champion racial reconciliation, during the 400 year anniversary of enslaved Americans being brought to Virginia, while being comfortable under the hood and/or behind a blackface," Cooper posted on social media.

In his written apology, Northam said he would heal the damage his past conduct had caused.

“This behavior is not in keeping with who I am today and the values I have fought for throughout my career in the military, in medicine, and in public service. But I want to be clear, I understand how this decision shakes Virginians’ faith in that commitment.

“I recognize that it will take time and serious effort to heal the damage this conduct has caused. I am ready to do that important work. The first step is to offer my sincerest apology and to state my absolute commitment to living up to the expectations Virginians set for me when they elected me to be their governor.”

Last month, Florida’s secretary of state, Michael Ertel, resigned after photos emerged of him posing as a Hurricane Katrina victim in blackface 14 years ago, the Tallahassee Democrat reported.

Jack Wilson, chairman of the state GOP, said in a statement Friday afternoon, "Racism has no place in Virginia," and the "pictures are wholly inappropriate."

Wilson said: "If Governor Northam appeared in blackface or dressed in a KKK robe, he should resign immediately."

Republican leaders in the Virginia House and Senate had said in an afternoon statement: "This is a deeply disturbing and offensive photograph in need of an immediate explanation by the governor.” They did not, however, call for his resignation.

Stoney said late Friday: “Governor Northam has a long and distinguished history of service to our Commonwealth and nation, but he should do the honorable thing and step down."

Stoney, an African-American, had recruited Northam to run for state Senate during his tenure as executive director of the state Democratic Party.

As the evening unfolded, more calls came nationally on social media for Northam to resign, including from the NAACP and R&B star John Legend.

Julian Castro, a 2020 Democratic presidential candidate and former secretary of the U.S. Department of Housing and Urban Development, called on Northam to resign. “It doesn’t matter if he is a Republican or a Democrat," Castro tweeted. "This behavior was racist and unconscionable. Governor Northam should resign."

Castro's tweet was followed later by one from California Sen. Kamala Harris, another Democratic presidential candidate, who said: "Northam should step aside so the public can heal and move forward together."

Larry Sabato, head of the Center for Politics at the University of Virginia, tweeted that if Northam resigns he will be the first Virginia governor since the Civil War not to complete his term. Sabato also noted that if Fairfax completes Northam's unexpired term, he will remain eligible to run for a full term in 2021.

A quotation on the yearbook page purportedly from Northam, reads, “There are more old drunks than old doctors in this world so I think I’ll have another beer.”

Vincent Rhodes, assistant vice president of marketing and communications at EVMS, said: “Yearbook production was a student activity. We don’t know when or where the picture was taken. … We’re really not able to comment on a picture of a medical school student taken 30 years ago."

Northam is an Eastern Shore native who graduated from Virginia Military Institute in 1981 and then attended Eastern Virginia Medical School in Norfolk. He represented Norfolk and the Eastern Shore in the state Senate from 2008 to 2014 before becoming lieutenant governor and then being elected governor in 2017.

In a 2017 interview with the Richmond Times-Dispatch, Northam said he had just recently learned that his ancestors were slave owners. “My family’s complicated story is similar to Virginia’s complex history. We’re a progressive state, but we once had the largest number of slaves in the union,” Northam said.

Early in his tenure as governor, Northam had enjoyed signature achievements, signing off on Medicaid expansion and wooing half of Amazon's eastern headquarters to Crystal City in Arlington County. But one tumultuous week sparked a sharp turn.

The news of the photo surfaced two days after Northam made controversial remarks about late-term abortion that caused a storm in national conservative media and prompted Republicans to accuse him of supporting infanticide.

As governor, Northam has stressed inclusiveness. In his inaugural address he noted what he called Virginia's "complex" history.

"In a church on a hill 15 blocks from here, Virginia’s first elected governor helped launch the American Revolution when he cried, 'Give me liberty, or give me death!' " Northam said.

"But at the bottom of that same hill, one of the country’s largest slave-trading markets was coming to life. A place where Virginians would sell men, women, and children for profit."

Race has played a key role in a number of Virginia's statewide campaigns in the modern era.

In 1989, L. Douglas Wilder became the nation's first-elected African-American governor, an event seen as a milestone of reconciliation in a once-segregated South. Virginia's current lieutenant governor, Fairfax, is the second African-American to hold that role, after Wilder.

In 2006, U.S. Sen. George Allen, a Republican, lost his re-election bid to Democrat Jim Webb after Allen referred to a Webb volunteer of Indian descent as "macaca," considered an ethnic disparagement in some cultures.

Virginia’s growing ethnic diversity has helped fuel the Democrats’ winning streak in a state where Republicans have not won a statewide contest since 2009.

Kaine was the first governor outside of Illinois to endorse Barack Obama’s 2008 presidential campaign. That year Obama became the first Democrat in 44 years to capture Virginia’s electoral votes.

The day after Obama’s victory, Kaine stood with his wife, Anne Holton, in front of the Virginia Civil Rights Memorial at the state Capitol and said: “Ol’ Virginny is dead.”

In August 2017, following the deadly white nationalist rally in Charlottesville, Northam - then the Democratic nominee for governor - said in a statement that Confederate statues "should be taken down and moved into museums." He has not pursued that policy as governor.

Prior to his run for governor, Northam twice voted for Republican George W. Bush for president and at one point was nearly convinced by state Senate Republican leader Tommy Norment to flip to the GOP. During his 2017 run, however, Northam moved left to win easily in a Democratic primary against former Rep. Tom Perriello, D-5th.

Both sides dug in their heels Thursday as Virginia’s raging abortion controversy entered a third day, with Gov. Ralph Northam saying he doesn’…

Ralph Northam's ancestors owned slaves. He found out only recently.

The president of the United States questioned why the Civil War was fought. Virginia Lt. Gov. Ralph S. Northam was among many who answered.

Virginia Gov. Ralph Northam: 'I am deeply sorry for the decision I made'

PHOTOS: The inauguration of Ralph Northam, the 73rd governor of Virginia

Gov. Ralph Northam has served his nation and commonwealth with admirable distinction and dedication. So it gives us no pleasure to see his rap…

Northam tweets video statement on yearbook photos: I am committed to 'fight through the remainder of my term'

This article will be updated throughout the day as news develops.

Gov. Ralph Northam refused to resign from his office Saturday and instead attempted to ride out a scandal that is threatening to end his polit…

Protests calling on Northam to resign continue outside Executive Mansion

Protesters outside the Executive Mansion on Monday again called on Gov. Ralph Northam to resign after a racist photo was discovered on his med…

A page from the 1984 Eastern Virginia Medical School yearbook photographed by the Richmond Times-Dispatch, Feb. 1, 2019.

Gov. Ralph Northam said Saturday that he is not posing in this photo.