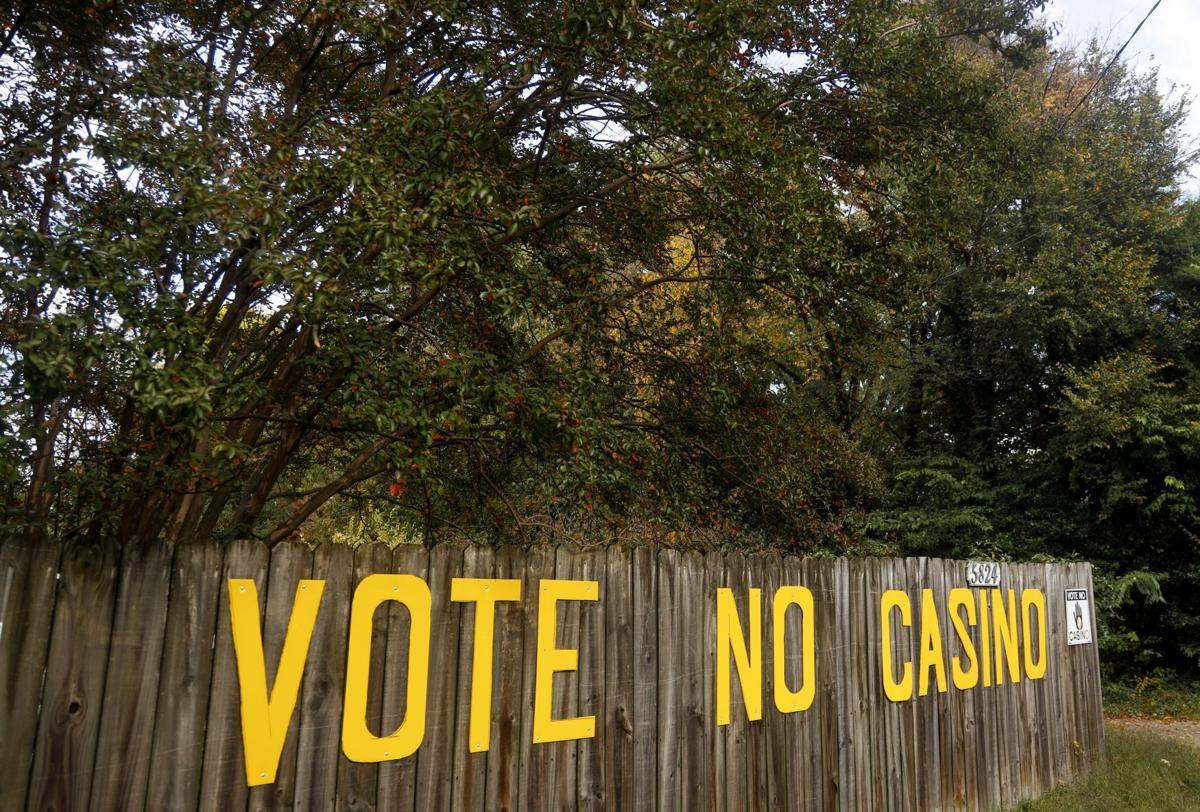 In late October, a sign in Richmond urged voters to reject the casino project. The measure fell short by about 1,500 votes on Election Day last month. 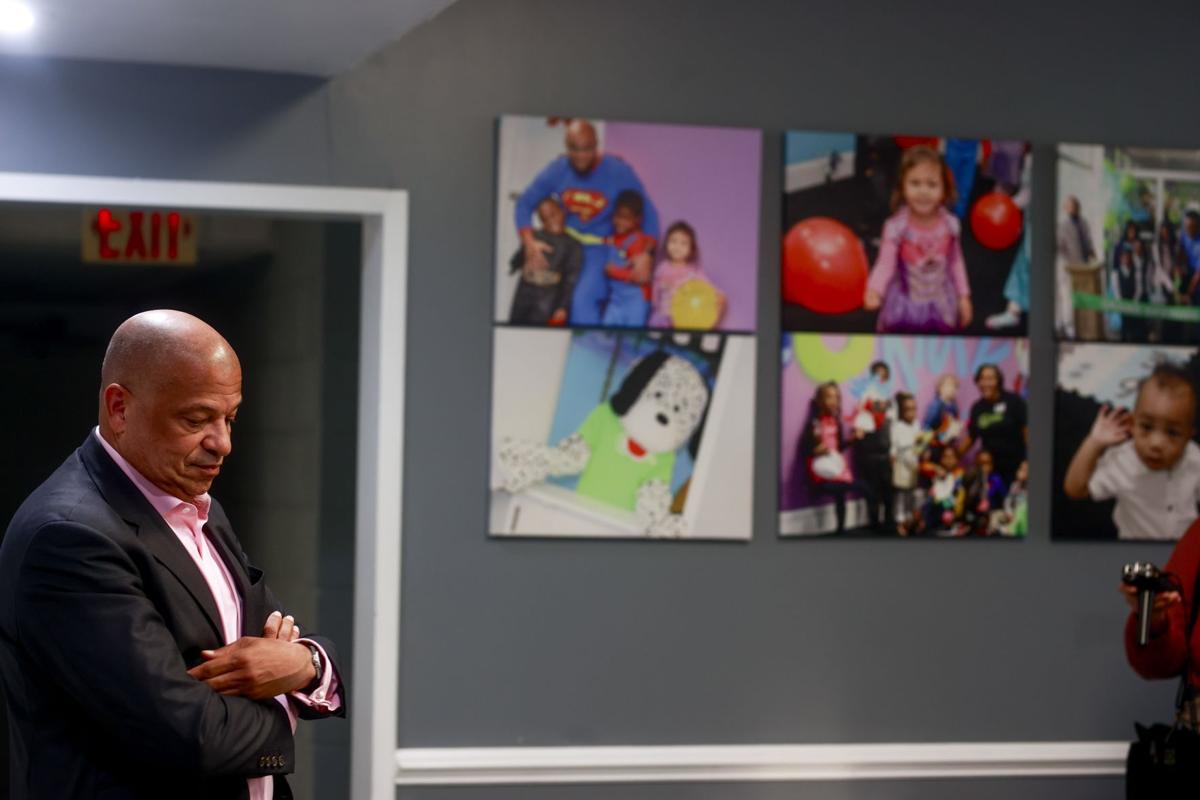 Alfred Liggins, shown during a news conference in late October, is CEO of Urban One, the company that sought to build a $565 million casino resort in South Richmond. Voters rejected the project by a narrow margin, 49% to 51%, mostly along racial and geographical lines.

After a narrow majority of city voters last month rejected plans for the One Casino and Resort, a new survey that includes questions about how people voted in the referendum, whether they would change their mind about it and the possibility of a casino being located in Petersburg instead has started circulating among Richmond residents.

Meanwhile, Richmond City Councilwoman Reva Trammell says she is collecting signatures for a petition asking the city to hold another referendum for the $565 million casino resort that had been proposed in her South Side 8th District.

The petition drive and survey circulating by phone and automated text messages have led some political observers and casino opponents to speculate whether the project’s backers are assessing how they can improve public messaging to win the popular vote in Richmond rather than 25 minutes south of the state capital on Interstate 95.

The One Casino campaign projected $500 million in tax revenue over the next decade and 1,500 new jobs. Supporters also highlighted that it would be the only Black-owned casino in the country and a major economic development opportunity for a predominately Black and Hispanic community in a poor section of South Richmond.

The 49% to 51% vote, however, was sharply divided along racial and geographic lines. The ballot measure fell short by about 1,500 votes, with voters in the city’s majority white precincts voting 2-to-1 against the project, even as voters closest to it voted overwhelmingly for it.

“Clearly they think that with slightly different messaging, they would have the opportunity to win if it came again,” said Bob Holsworth, a veteran political analyst and former Virginia Commonwealth University dean. “They’re exploring whether they would have a better chance of it passing if they redo the messaging with a stronger focus on challenges to the city’s budget.”

It’s unclear who is circulating the survey. It is untitled and does not provide any additional information upon completion. Urban One, the national media conglomerate behind the Richmond casino proposal, did not deny involvement in the survey, but declined to answer questions Wednesday through its public relations office.

Holsworth, one of the recipients of the survey texts, said he’s unsure who made it, but that it appears a “well-heeled” organization would prefer a casino in Richmond based on how the questions are framed.

Organized opposition to the casino, loosely coordinated by progressive advocacy group Richmond for All and veteran political strategist Paul Goldman, raised about $200,000 fighting it. Richmond businessman Jim Ukrop and The Family Foundation, a conservative social action group, through its own anti-casino campaign committee, each contributed around $55,000. The various opponents objected to the project citing concerns about problem gambling, projected revenues and benefits falling short and the negative impact it could have on low-income residents and households.

The survey asks respondents how they decided to vote on the casino question, whether they remember the location of the project site, how close they live to it and whether they saw or heard any pro- or anti-casino campaign messages before the election.

It also includes questions asking if respondents would support a casino in Petersburg and whether they would be more likely to vote for a Richmond casino if it included more direct funding for affordable housing, local tax relief and public education, particularly as Richmond is poised to lose upward of $16 million in state education funding next year because of declining enrollment in city schools amid the COVID-19 pandemic.

Trammell said in an interview Wednesday that she had seen the survey, but does not know who made it and has been focused on speaking to constituents and figuring out how to revive the project.

“I would do everything to bring it back at the same location” at the Philip Morris USA property on Walmsley Boulevard off Commerce Road, she said. “I still support it 100%”

Stoney’s spokesman, Jim Nolan, said the mayor understands why Trammel and others would be interested in another vote, but declined to answer whether the city administration is also looking into that option.

A few of the survey questions also seem to probe the racial divide in the vote, and Holsworth noted that it also asks whether national civil rights leader Al Sharpton’s support for the project or U.S. Sen. Tim Kaine’s opposition influenced voters.

“I think [Richmond Mayor Levar Stoney] and many in the African American community thought it would have a good potential to win because it had diverse, minority ownership and it wasn’t located in a place where it would be opposed,” he said. “I think there was a sense that some white liberals wouldn’t support it, but I think the extent of the opposition surprised people.”

Councilman Michael Jones, whose 9th District voted heavily in favor of the casino, said a sense of paternalism seemed to influence some progressive voters to oppose it.

“We’ve had enough things to divide us as a city. ... That’s what pains me the most,” he said. “We say we don’t want to tell people what to do with their bodies. Why can’t we make that same choice with gambling?”

Jones said he is not advocating for another casino vote but would support it again if there’s enough public demand.

Sen. Joe Morrissey, D-Richmond, whose district includes Petersburg, the city of Hopewell and parts of Richmond and the counties of Chesterfield, Dinwiddie and Prince George, had also been a major proponent of the project, but said he is now strictly focused on giving Petersburg an opportunity to vote on the project.

A Petersburg casino referendum would require changes to the state casino bill. The law as written currently entitles only Richmond, Danville, Portsmouth, Norfolk and Bristol to casino licenses, subject to approval by local voters in each locality. Voters in the other cities overwhelmingly approved casino plans in their communities.

Sen. Jeremy McPike, D-Prince William, who heads a Senate subcommittee on gaming, said Thursday that he thinks Richmond would be entitled to hold another referendum, but that Morrissey’s plan raises questions for state lawmakers about whether to allow both cities to hold a referendum or restrict it to one locality in the region.

Morrissey in an interview Wednesday evening said he had not seen the survey, but explained that he would be “unhappy” if Urban One was still considering Richmond after he coordinated discussions between the company and Petersburg officials about relocating the project there.

“[Stoney] said the citizens have spoken. They rejected it. So, within hours of that, I started trying to build a coalition to get that casino in Petersburg,” he said. “The mayor didn’t get the job done. I intend to get it done in Petersburg.”

While a Petersburg casino referendum remains subject to approval by state lawmakers, Morrissey and Petersburg Mayor Sam Parham said they want the city to open up the process to multiple companies rather than sticking with Urban One, which Richmond officials selected after evaluating six casino proposals earlier this year.

“They will need to come forward with the best plan. It’ll be a competition,” Morrissey said. “There won’t be any backroom deals, no secret negotiations.”

'I was expecting it to pass': Urban One casino fails despite being heavily favored by voters in South Richmond

The One Casino and Resort was billed as a plan to build the nation’s first Black-owned casino and uplift South Richmond. On Tuesday, voters in…

In late October, a sign in Richmond urged voters to reject the casino project. The measure fell short by about 1,500 votes on Election Day last month.

Alfred Liggins, shown during a news conference in late October, is CEO of Urban One, the company that sought to build a $565 million casino resort in South Richmond. Voters rejected the project by a narrow margin, 49% to 51%, mostly along racial and geographical lines.