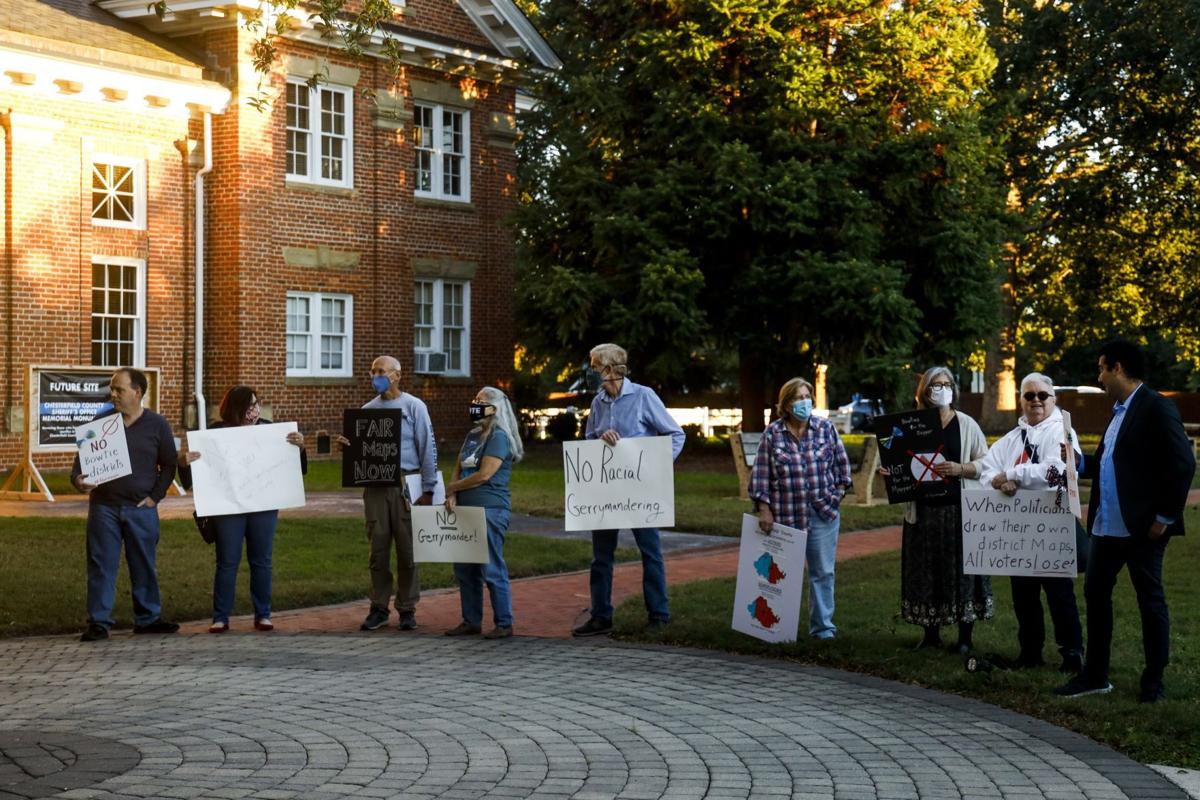 A small group of protesters chanted “Fair maps!” and “No bowtie districts!” and “No racial gerrymandering!” outside Wednesday’s public hearing in Chesterfield County. One resident described the proposed maps as “designer.” 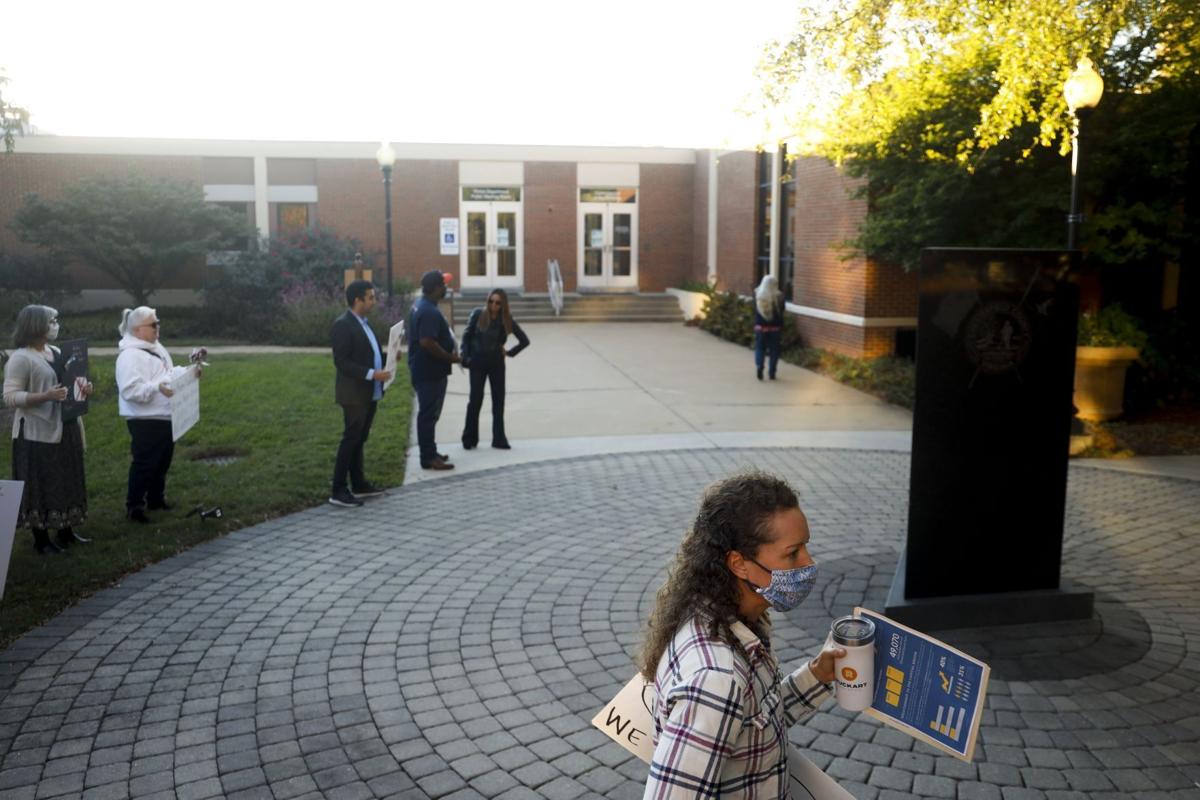 Traci Granssen demonstrates with other community members on Wednesday, October 27, 2021 outside a Chesterfield County Board of Supervisors meeting. Some residents are concerned that the county’s new political maps were designed to help reelect incumbents. 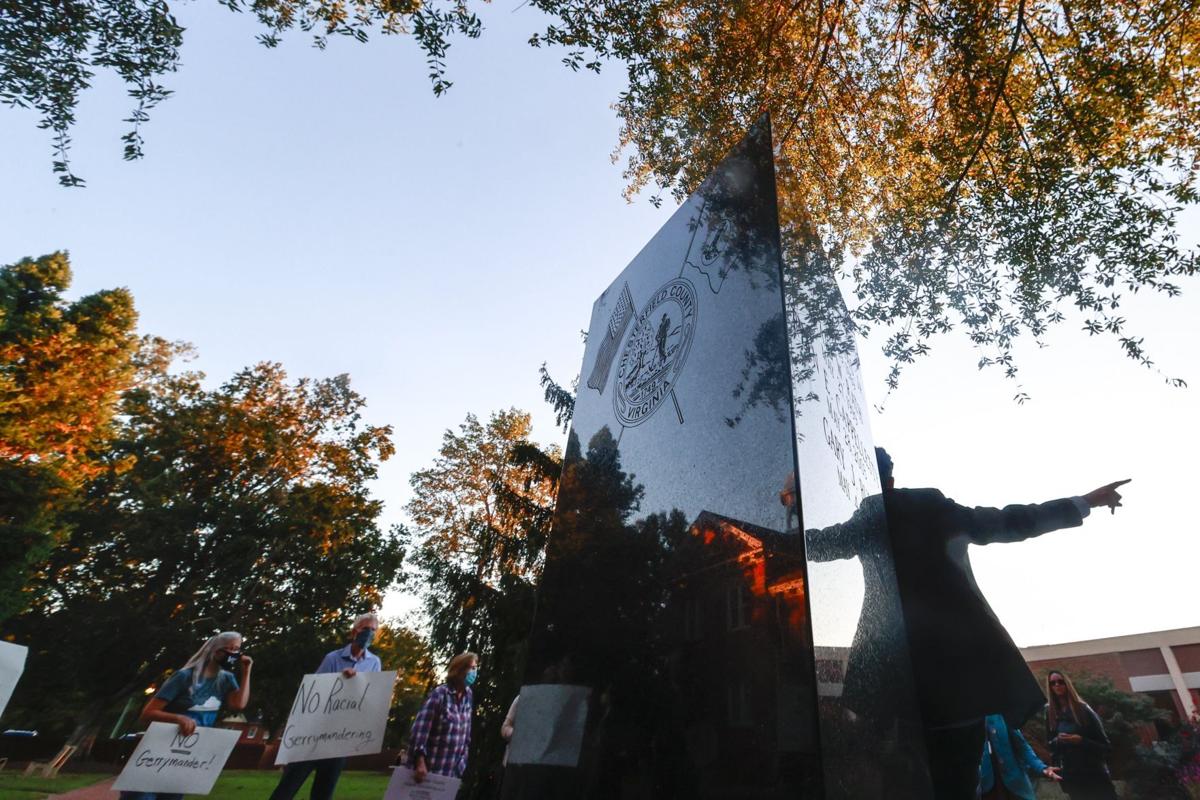 Murtaza Khan spoke during a demonstration in October in Chesterfield County that raised concerns about the county’s proposed political boundaries.

The Chesterfield County NAACP branch has joined the ranks of residents and the county’s Democratic Party in criticizing the newly proposed county boundary lines that favor Republican incumbents who control both the Board of Supervisors and School Board. The supervisors are scheduled to vote Wednesday night on the maps that will determine the political lines for the next decade.

An analysis of the county’s proposed map based on the results of this month’s gubernatorial elections shows that the changes would likely help solidify incumbent power on the Board of Supervisors, which has four Republicans and one Democrat.

In a five-page open letter addressed to the county Board of Supervisors and County Attorney Jeffrey Mincks, the NAACP is calling for the county to have an independent, bipartisan commission to draw the new district lines, consult with experts to engage in fair and equitable redistricting and have in-person public comment where transparent explanations of any proposals would be discussed.

“As a general sentiment, it troubles the Branch that the very elected officials (incumbents) who stand to benefit from redistricting decisions are in charge of determining new voting map boundaries,” according to the Nov. 14 letter, penned by Katherine Poindexter, the branch’s Legal Redress Committee chair.

“When communities of color, those of reduced socioeconomic status, and precincts with voting diversity appear to be getting herded into our already very diverse magisterial districts, for example, the Dale District, we must take pause and inventory the ‘why’s’ behind these actions,” Poindexter said in a statement.

Redistricting is legally required every decade in conjunction with the release of new census numbers to ensure Chesterfield is fairly spliced into similarly sized pieces. Propelled by an influx of residents of color, Chesterfield saw an increase of nearly 50,000 people in the past decade, for a total of 365,000 residents.

Dividing the new population size by the county’s five districts, the proposal is striving for each district to have roughly 73,061 residents. However, officials have wiggle room, meaning each district must have between 69,350 and 76,650 residents.

Chesterfield’s redistricting proposal affects all but one district. While the proposal doesn’t affect school assignments, it does alter who eligible voters will vote for in local elections. As the proposal stands, five voting precincts — three strong Republican, one heavily Democratic and one swing — are set to move, with most solidifying Republican power.

County leaders and the Board of Supervisors chairman, the board’s lone Black member and only Democrat, have said the map contains no political gerrymandering.

The NAACP wrote the redistricting process has lacked transparency and that officials are making decisions without any explanation or substantive public oversight.

The branch would like for the county to draft a presentation, complete with justifications for every boundary move where all supervisors would be present and “sufficient time” would be set aside for public comment.

County officials did not make themselves available for interview requests regarding the redistricting process. A September interview, scheduled by the county, was subsequently canceled by county officials with no further dates proposed. Follow-up requests from a reporter were not fulfilled.

Instead, the county leaders agreed only to answer questions emailed to a spokesperson. County spokeswoman Susan Pollard wrote the county “emphasized” to residents the redistricting process was driven by equalizing populations and that officials looked into “any significant effect on racial demographics.”

A question regarding whether the county can say the proposal doesn’t have any elements of gerrymandering went unanswered. The county also did not directly respond to the concerns made by the NAACP or the Democratic Committee; instead they reiterated the public could submit comments and alternative maps.

At last month’s public hearing, supervisors said they were open to residents submitting redistricting proposals. In the past week, two residents teamed up and did just that.

Dubbed “The Citizens Fair Map,” the residents worked to also leave Midlothian and Bermuda untouched because their populations already fit the required numbers, and to move fewer voting precincts.

Pollard did not address a series of questions regarding why the county decided to touch Midlothian at all, given it already met population requirements. She also did not answer why Matoaca residents shifted to Midlothian and Clover Hill instead of Dale.

In the county proposal, five voting precincts are set to move: Matoaca’s Tomahawk, Skinquarter and Woolridge, Midlothian’s Pocoshock and Clover Hill’s Manchester. In the Citizens Fair Map, only three Matoaca precincts would need to shift: Beach and West Beach into Dale and South Manchester into Clover Hill. The residents’ map keeps all districts within the required window of population size.

Using the results of the governor’s race this month, the residents’ map would mean two largely Republican precincts would move into Dale, the county’s most Democratic-leaning district. And Clover Hill, which had the closest race in the last Board of Supervisors election, would gain a precinct that was nearly evenly split in the governor’s race: Democrat Terry McAuliffe received 13 more votes there than Republican Glenn Youngkin.

Residents have expressed concerns over the proposed map packing the Dale District, where the only Black and Democratic supervisor resides, with more Black residents that in turn makes the county’s other trending blue and diverse districts more white.

The Citizen Fair Map states that “Black and other race residents are decreased in every district where residents are moved except for the Dale District which is currently a majority [persons of color] District.”

The NAACP is “disturbed about the clear want of ‘compactness’ ” of the proposal, as it dilutes populations of color in existing districts of Clover Hill and Midlothian, moving all of them into Dale.

Residents living in the Woodlake neighborhood of Matoaca complained that the county’s plan split the neighborhood into two districts.

In a news release on Nov. 5, the county slightly altered its proposal by moving the entire Woodlake neighborhood from Matoaca into Clover Hill, adding hundreds more Republican votes to Clover Hill in the process.

“This new plan exacerbates the racial packing into Dale,” Schall said in an interview. “We shouldn’t be packing Black voters into Dale.” The Citizen’s Fair Map states that roughly 1,500 Black residents are being moved into Dale, based on the Sept. 22 county redistricting proposal.

The NAACP doesn’t see the justification for adjusting the Woodlake portion, saying “shifting these parcels as you are, does not align with the goals of ‘compactness,’ nor fairness.”

Lacey England, a Matoaca resident who lives in the Foxcroft subdivision, said in a recent interview that the new proposal is splitting her neighborhood in half. England and her family are now set to move into Clover Hill.

After receiving “substantial feedback” and alternative maps from Woodlake residents, the county changed course, Pollard wrote in an email. Foxcroft is being affected, Pollard said, because there is no geographic feature to separate Foxcroft from Woodlake.

According to the county’s Facebook page, an update to the Woodlake plan was made at 11:45 a.m. Monday, which says “the area east of Woodlake Village Pkwy, south of West Branch Dry Creek has now also been included in the alternative Plan B proposal.” Monday’s alternate still includes the splitting of Foxcroft.

In a statement Tuesday evening, the county said Monday’s additions were originally included in the September redistricting map to move into Clover Hill. However, “to satisfy the rules of contiguity and compactness it was removed in early November to remain in the Matoaca District.” But, after “many discussions” with residents the alternate proposal was amended to once again include the portion back into Clover Hill.

“We did not get a fair public comment period or a public hearing,” she said.

Pollard wrote that the redistricting proposal time has shortened because of the delayed release of 2020 U.S. census numbers. While Chesterfield must approve a plan by the end of the year, the supervisors meet again in December.

The citizen map findings say the alternative Woodlake plan does not backtrack on the “significant racial gerrymandering” or get the districts closer to the ideal population size.

The citizen proposal also includes a scenario where Chesterfield is cut into seven instead of five districts. Each district would have roughly 52,200 residents, but Franssen acknowledged it’s unlikely the county would consider it.

On Monday evening, Sara Gaborik, chair of the Chesterfield County Democratic Committee endorsed the Citizens Fair Map proposal for five districts on behalf of the organization.

“The Chesterfield County Democratic Committee endorses the Citizens Fair Map as nonpartisan and as a better representation of our increasingly diverse county. After reviewing the citizens’ alternative we would urge our supervisors to reject the map proposed by county staff in favor of the Citizens Fair Map,” Gaborik said.

The committee is asking the supervisors to delay their planned approval and keep the public comment period open for another month.

“We believe the resulting map could be a violation of the federal Voting Rights Act,” Gaborik added.

When reached in late October for an interview, Chesterfield County Republican Committee Chair Rick Michael said the committee was focused on the election and had not taken a public stance on the county’s redistricting map. Michael did not respond to a follow-up request after the election. The Republican Party swept statewide races on Nov. 2, the first time since 2009.

A small group of protesters chanted “Fair maps!” and “No bowtie districts!” and “No racial gerrymandering!” outside Wednesday’s public hearing in Chesterfield County. One resident described the proposed maps as “designer.”

Traci Granssen demonstrates with other community members on Wednesday, October 27, 2021 outside a Chesterfield County Board of Supervisors meeting. Some residents are concerned that the county’s new political maps were designed to help reelect incumbents.

Murtaza Khan spoke during a demonstration in October in Chesterfield County that raised concerns about the county’s proposed political boundaries.