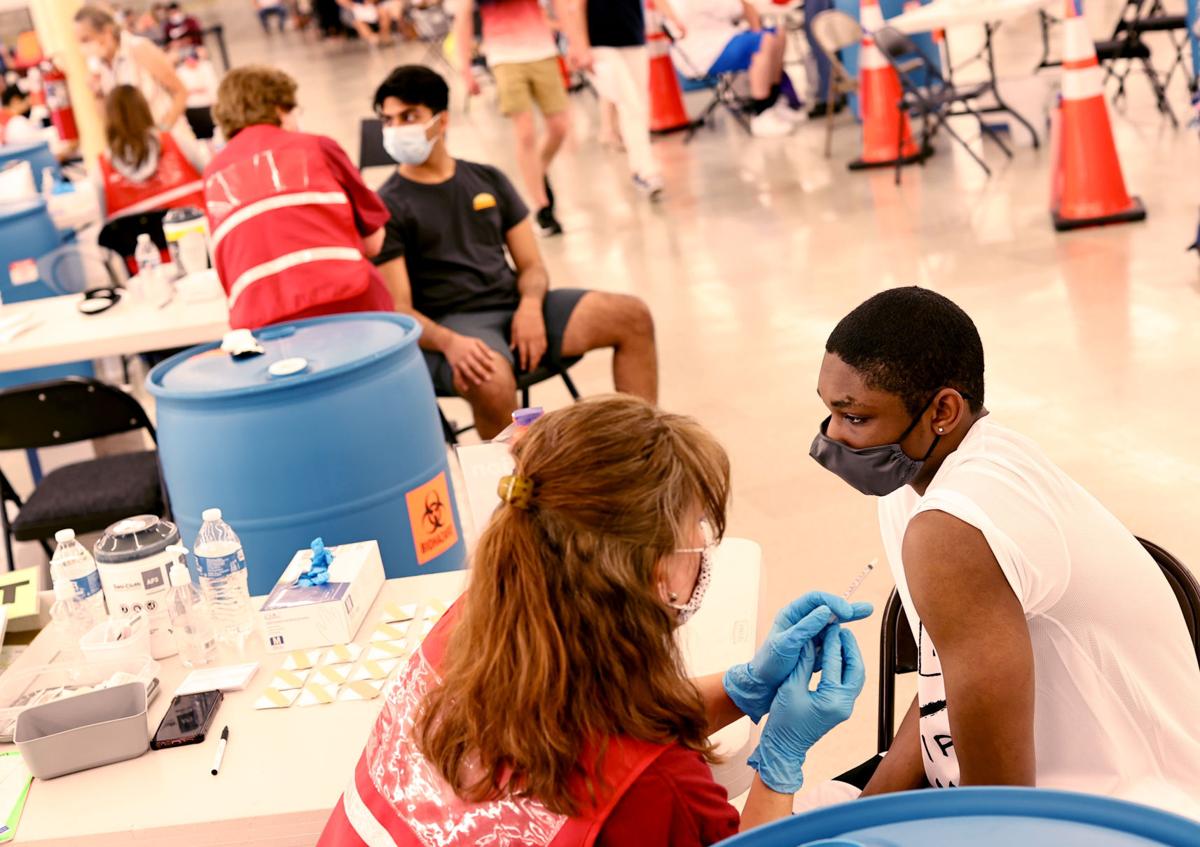 Karen Wooten, a registered nurse, administers a dose of the Pfizer vaccine to Torie Robinson, 16, right, at Hanover's vaccination clinic in Ashland, Va., on Wednesday, April 28, 2021. 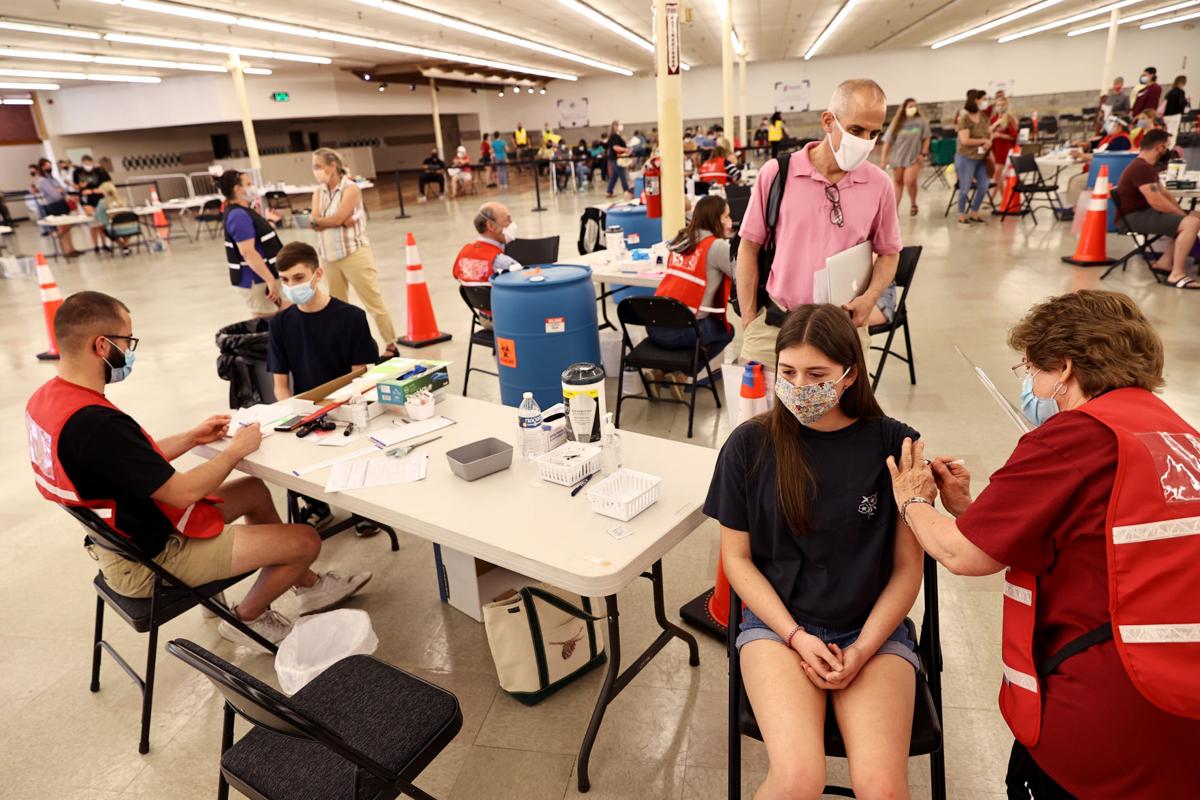 Christine Charbonneau (right), a nurse practitioner, administered a dose of the Pfizer vaccine to Anastasia Rubis, 17, as her father, Ted Rubis, watched them at Hanover’s vaccination clinic in Ashland on Wednesday. 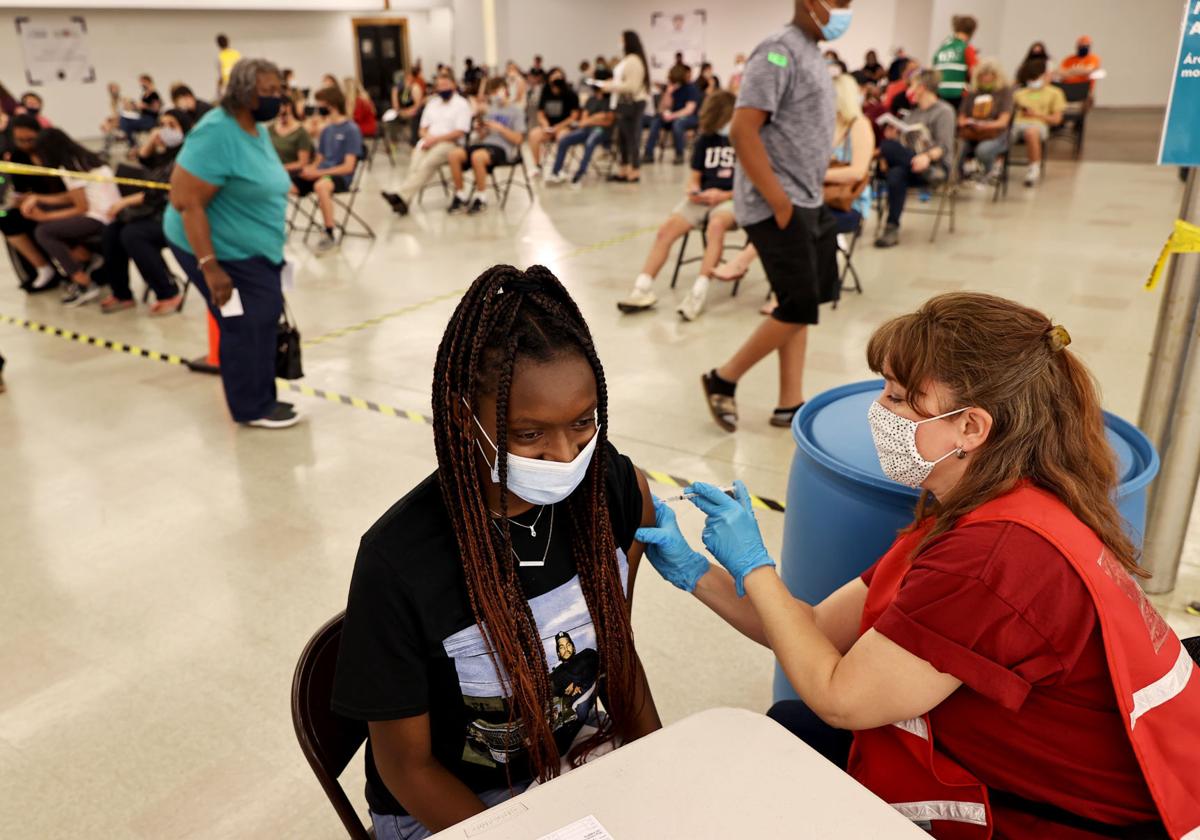 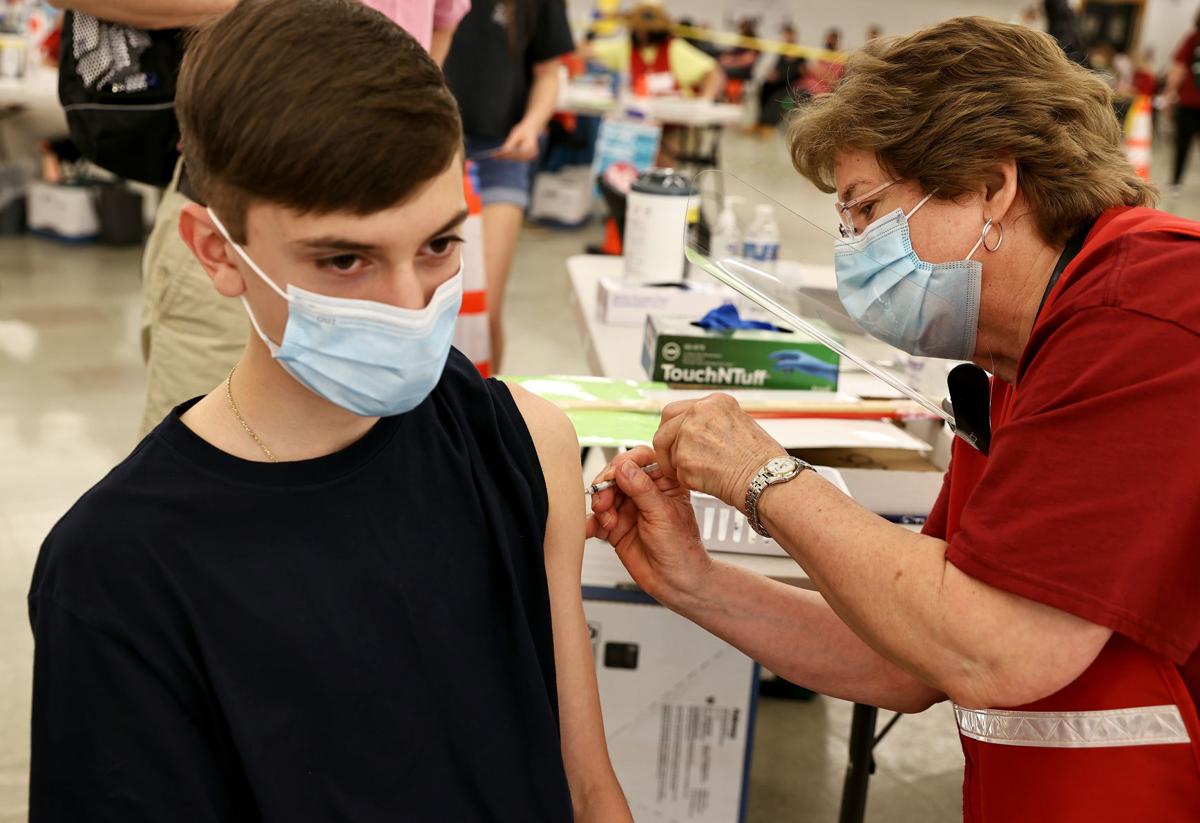 Christine Charbonneau, right, a nurse practitioner, administers a dose of the Pfizer vaccine to Christos Rubis, 16, at Hanover's vaccination clinic in Ashland on Wednesday, April 28, 2021.

The New Kent County teen, just weeks into being 16 years old, was vaccinated Wednesday evening at a Hanover County vaccination clinic aimed at 16- and 17-year-olds.

Robinson and his aunt, Danita Harrison, were the first two people to walk into the clinic — the first of more than 400 who registered with the Chickahominy Health District to receive the Pfizer vaccination, currently the only vaccine approved for teens.

When asked for a reaction, Robinson simply shrugged. The needles, it seems, didn’t bother him. As a diabetic, he’s used to daily insulin shots.

His aunt, however, gushed.

“We were so excited,” Harrison said.

“We had to drive a little distance, but it was worth it,” she said, particularly when she thinks about Robinson and his safety as he returns to school and life in general. “It gives us more security.”

Harrison and her husband are both fully vaccinated, so “he completes the family now.”

The efforts at the clinic underscore Gov. Ralph Northam’s efforts to reach herd immunity, which he says would happen when at least 70% to 75% of the population, including some children, are vaccinated. Northam said he expects to begin vaccinating children ages 12 and older this summer, if ongoing clinical trials are successful.

Hanover resident Ted Rubis watched Wednesday as his two oldest children, Anastasia, 17, and Christos, 16, were vaccinated. As a pharmacist, he was vaccinated early.

“They want to get back to life as normal,” he said of his kids.

With a bandage on her shoulder, Anastasia Rubis agreed. She said she misses things like basketball tournaments, camps and after-school and church activities.

The shot itself “felt like a normal shot,” she said. “I’ve been really excited — I just feel like it’s the next step towards getting back to a normal life ... and everything that’s fun.”

The clinic recently received a $50,000 grant from the Episcopal Churches of Hanover County’s Frances Edmonia Newman Fund. That fund, established by Hanover resident Walter Newman in 1926 and named for his mother, started out as The Hanover Tubercular Fund because it was originally intended to help with medical needs of Hanover residents with tuberculosis.

The Board of Supervisors officially acknowledged the grant at its board meeting earlier this month. The money was given specifically to Hanover’s fire and EMS department, which oversees daily clinic operations.

The fund’s name may have changed over the years, but the mission to help Hanover residents with medical issues didn’t, said the Rev. Chris Miller of Immanuel Episcopal Church in the Old Church area on the county’s eastern side.

COVID-19 is the dominant public health crisis in modern times, Miller said, so it’s only fitting that some of the fund money be used to support efforts to fight a pandemic that affects all Hanover residents, and particularly to help the county with “all of the unanticipated costs of running a clinic no one planned to run.”

In addition to Immanuel Episcopal, the group has seven other Episcopal churches: All Souls, Calvary, Church of Our Saviour, Creator, The Fork Church, St. James the Less and St. Paul’s.

Fire/EMS Chief Jethro Piland said no one knew last year that the county would be opening a vaccination clinic in 2021, which means funding that had been earmarked for other things — including money from his department — were used.

The $50,000 has gone a long way toward restoring money that was used to get the clinic up and running in January. The building, a former grocery store, needed some HVAC and other maintenance work, and funding also was used to get basic equipment, from tables and chairs to clipboards.

Piland called the church leaders “rock stars,” noting that within both leadership groups — the churches and the county — the missions aligned.

“Here is a family who set up a fund for the citizens of Hanover” who suffered from respiratory disease, Piland said about the Newman family. Even though it’s COVID-19 and not tuberculosis, “this is what this grant is designed to do, [and] it helped us get our feet under us and get us moving.”

Karen Wooten, a registered nurse, administers a dose of the Pfizer vaccine to Torie Robinson, 16, right, at Hanover's vaccination clinic in Ashland, Va., on Wednesday, April 28, 2021.

Christine Charbonneau (right), a nurse practitioner, administered a dose of the Pfizer vaccine to Anastasia Rubis, 17, as her father, Ted Rubis, watched them at Hanover’s vaccination clinic in Ashland on Wednesday.

Christine Charbonneau, right, a nurse practitioner, administers a dose of the Pfizer vaccine to Christos Rubis, 16, at Hanover's vaccination clinic in Ashland on Wednesday, April 28, 2021.