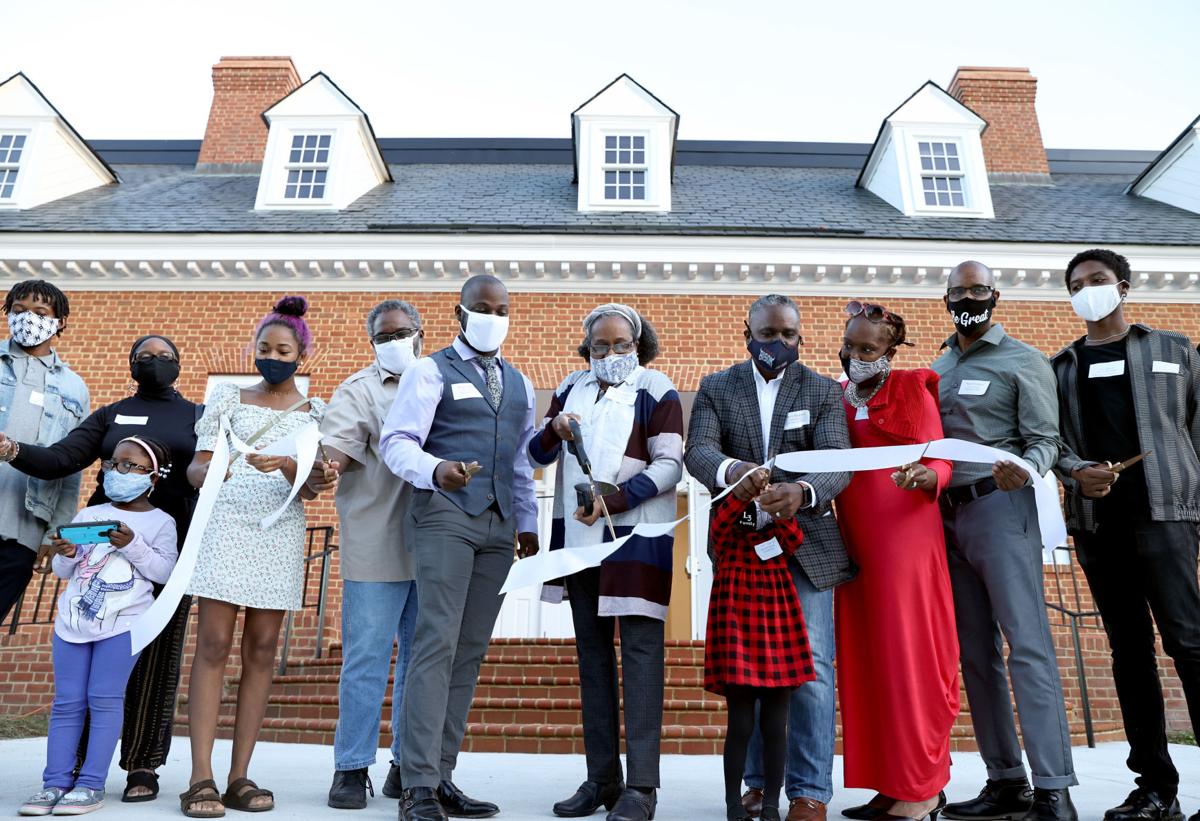 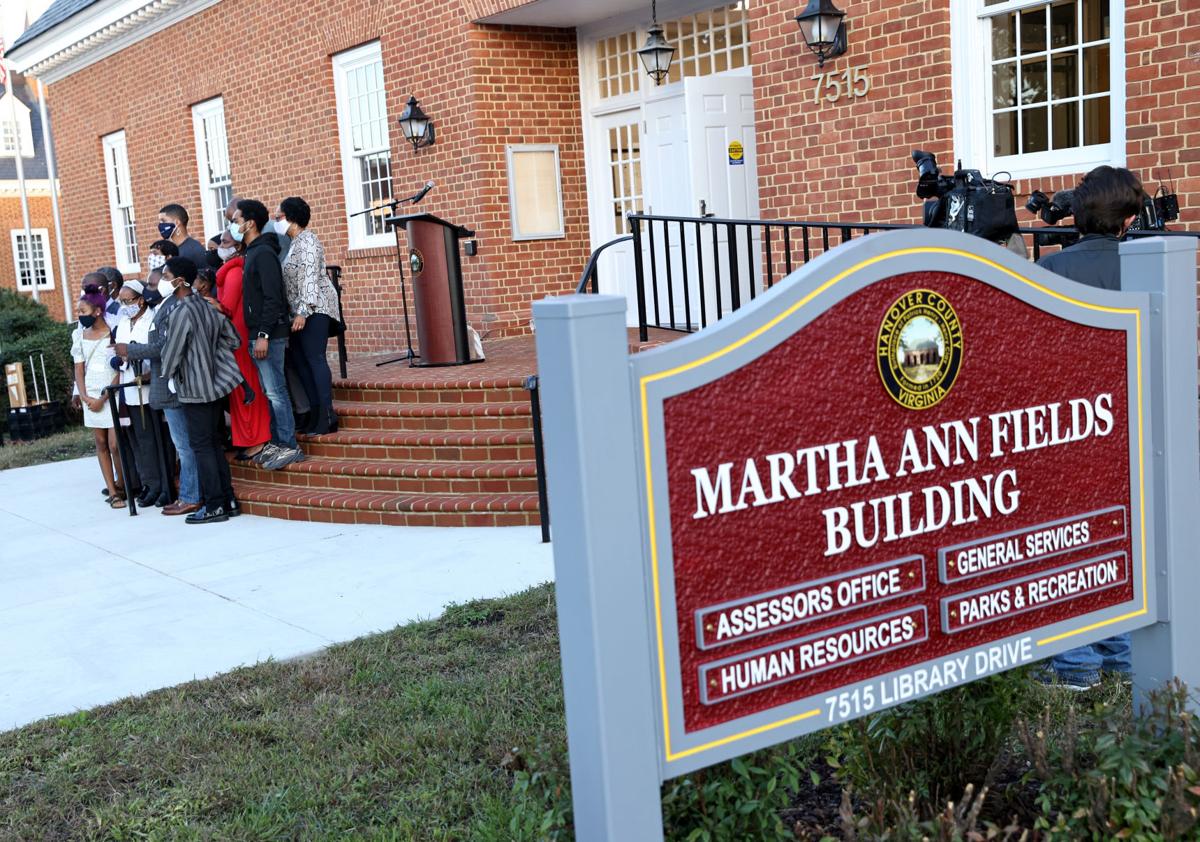 Martha Ann Fields’ descendants gathered Wednesday for a photo during the dedication of a building named for her. 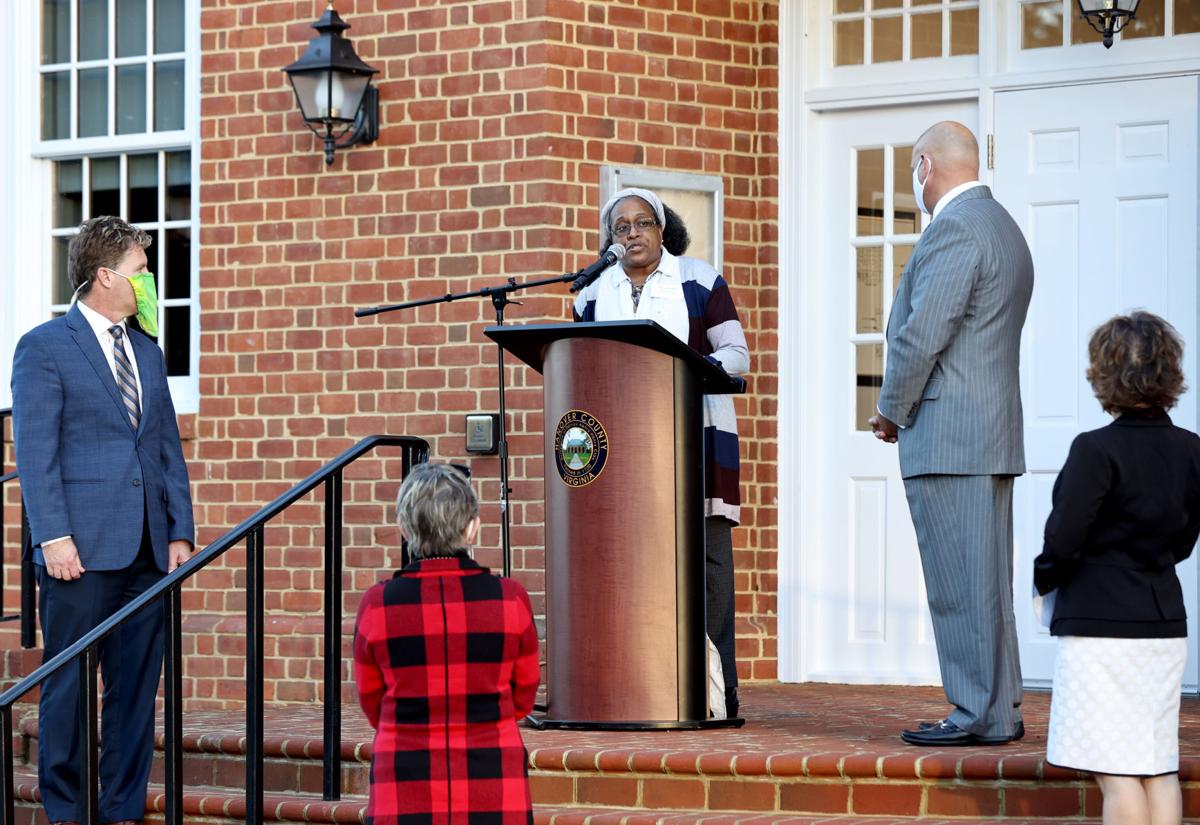 Ajena Rogers, a descendant of Martha Ann Fields, speaks as members of Hanover Board of Supervisors listen to her during the dedication of the Martha Ann Fields building in Hanover on Wednesday, Oct. 14, 2020. 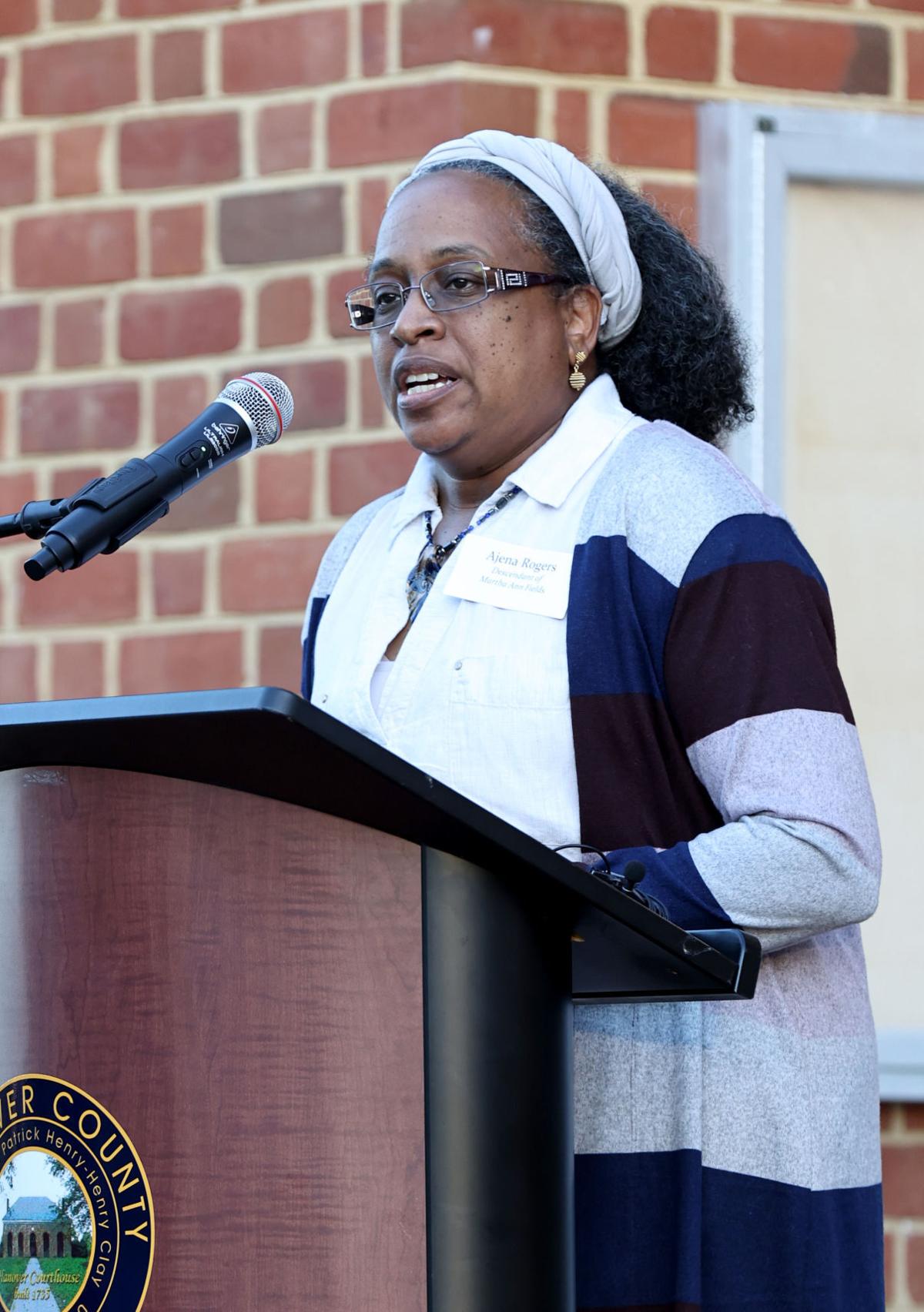 It’s hard for Ajena Rogers to find words for the moment.

She hesitates a bit as she stands outside a newly renovated brick building at Hanover County’s government complex that just received a new name — the name of one of her ancestors, Martha Ann Fields, who was enslaved at Nutshell on the same grounds.

Rogers knows that some of the plantation’s features remain, she said in a speech Wednesday at the building’s reopening — such as the pathway that led to the building where James Apostle Fields, Martha Ann’s son, took care of lawyers’ horses before deciding he would become a lawyer, too.

Martha Ann Fields’ descendants, some of whom had never met, gathered Wednesday with gold scissors behind a white ribbon to mark the moment as Hanover’s Board of Supervisors officially opened the Martha Ann Fields Building.

“She was just thought of as less than by the people around her, but she never let that spirit go, of wanting to be free, and be successful,” Rogers said. “And she did everything she could. And we’re standing here today because of that.”

The building, which previously housed the Hanover General District Court, will now be home to the county assessor’s office, as well as the departments of human resources, general services, and parks and recreation.

The new name was Supervisor Canova Peterson’s idea, county spokesman Tom Harris said. Peterson said that when it came time to pick a name, he and the rest of the Board of Supervisors knew the other buildings were named after people who had influence in Hanover. He was struck by Fields’ story.

“Her impact extended far beyond the slave labor that she did here in Hanover Courthouse and extended to the entire commonwealth,” Peterson said.

For Rogers, it was about adding more perspectives.

“What happened here is important,” she said. “We’re more than just one narrative.”

During her speech Wednesday, Rogers told her ancestor’s story with gusto. Martha Ann Fields left Hanover with most of her 11 children, ferrying them one by one across the Pamunkey River. They fled to Hampton Roads.

Fields made sure her kids had a future, she said. They became community leaders, church founders and members of the House of Delegates.

“It means a lot and it’s extremely important in the times that we’re in to be able to go back and see the impact that one person can have when she has the will and what comes from that will,” said Barry Hudson, a descendant of Fields and a cousin of Rogers.

Rogers told those gathered that Martha Ann Fields’ story isn’t fully told yet. Through examining the past, she said, we can move forward into the future.

“Soon, we’ll get through all of this with COVID and the search for racial justice [and] we will be able to come together as a community,” Rogers said. “That is what I foresee, so that six and seven generations from now, they’ll remember this day and they’ll remember us and they’ll remember how those we may have thought were the least among us embody an indomitable spirit.”

Williams: A 90-year-old Chesterfield man almost lost the right to vote this year because of a typo

Clarence Lee of Chesterfield County has been casting ballots since the end of World War II, an era of poll taxes, literacy tests and other roa…

Williams: The Lee statue property should belong to the city.

We cannot liberate Richmond from its veneration of the Lost Cause until we emancipate the ground where the Robert E. Lee statue stands.

RRHA says 15,000 signed up for chance at federal housing voucher

“The great demand comes from a situation we are all familiar with,” said Angela Fountain, an RRHA spokesperson. “Affordable housing is at a premium.”

Councilwoman Kimberly B. Gray’s campaign for mayor is built on a simple pitch: Incumbent Levar Stoney hasn’t delivered on the promises he made…

Justin Griffin was skeptical when the Navy Hill redevelopment project first emerged in 2018, so he examined the $1.5 billion project’s financi…

Martha Ann Fields’ descendants gathered Wednesday for a photo during the dedication of a building named for her.

Ajena Rogers, a descendant of Martha Ann Fields, speaks as members of Hanover Board of Supervisors listen to her during the dedication of the Martha Ann Fields building in Hanover on Wednesday, Oct. 14, 2020.