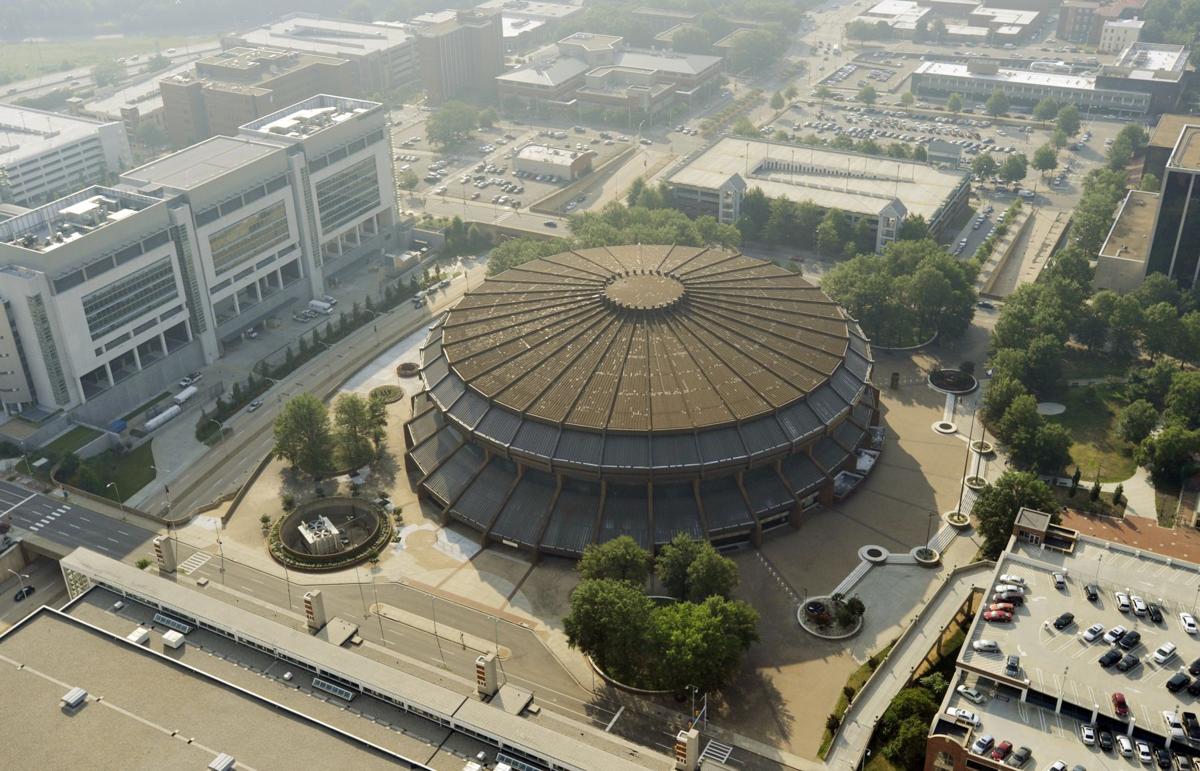 The Richmond Coliseum, which housed pro hockey, basketball, football and other teams for decades, was officially closed on Dec. 31, 2018. The potential for a replacement venue remains a hot-button issue. 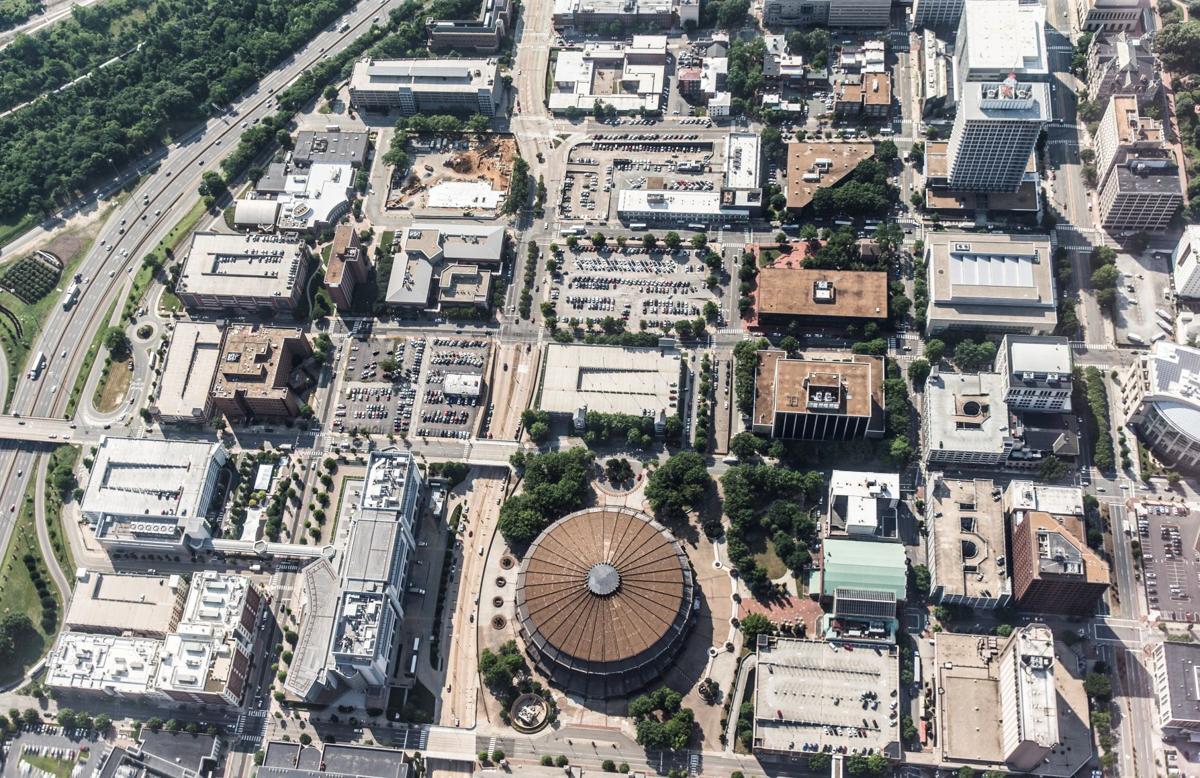 A November 2017 aerial photo of downtown Richmond included the Coliseum, the Richmond Marriott, the Greater Richmond Convention Center and more. The Navy Hill redevelopment plan is anchored by a new arena. 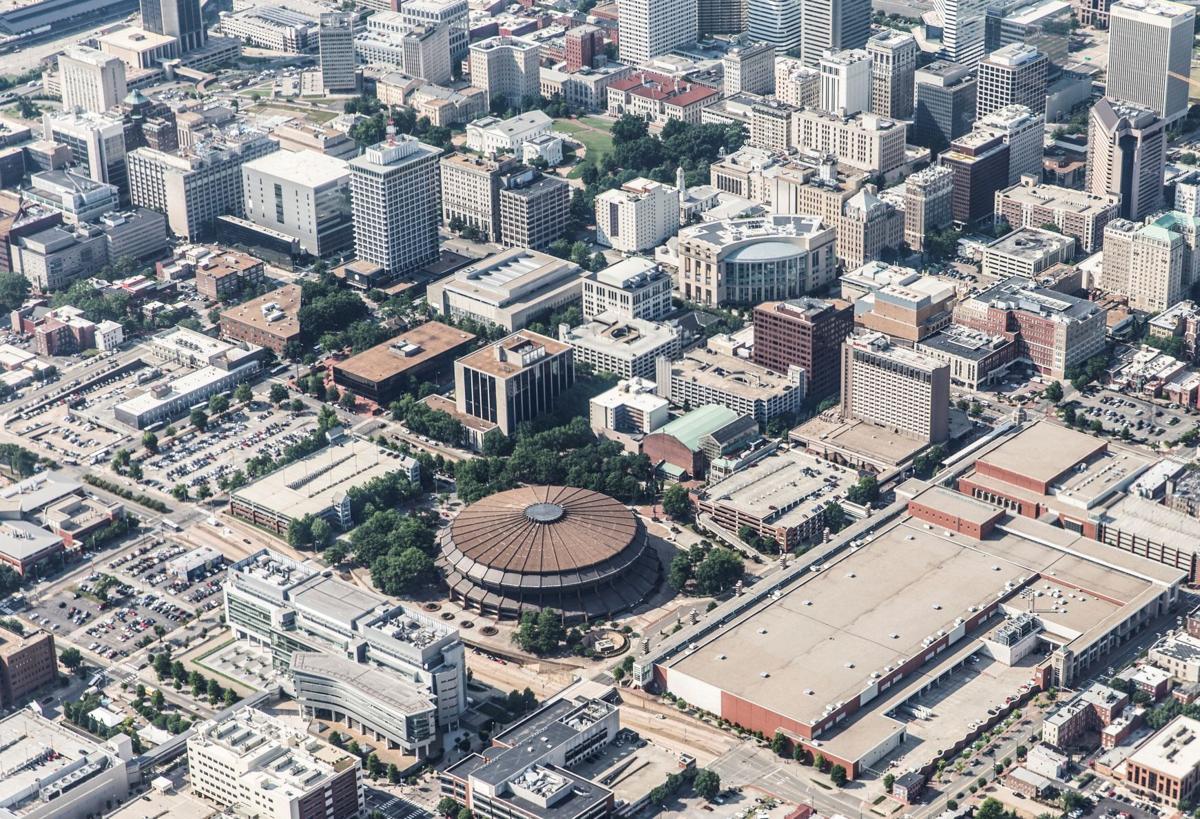 An aerial photo showed downtown Richmond, including the Coliseum and the Greater Richmond Convention Center, within the footprint where city officials are again proposing redevelopment. 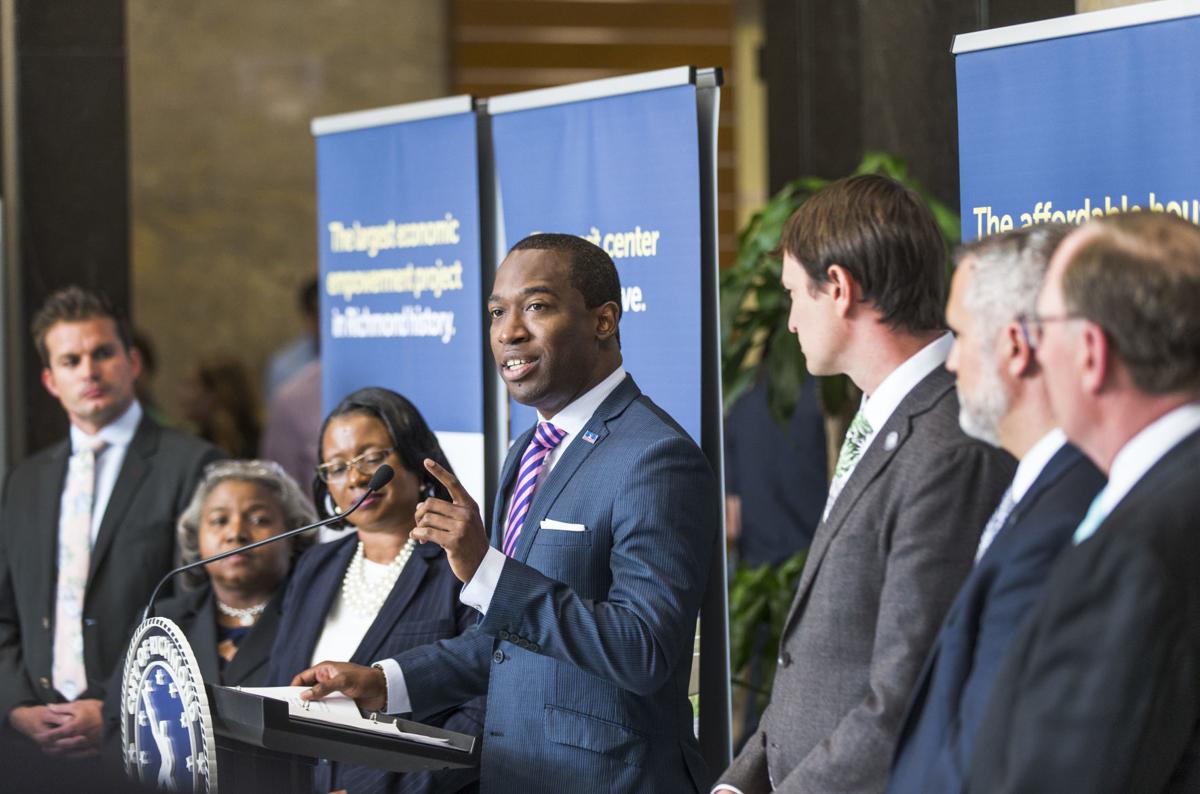 In early August, Richmond Mayor Levar Stoney (center) announced a proposal to replace the Richmond Coliseum and reshape a portion of downtown. 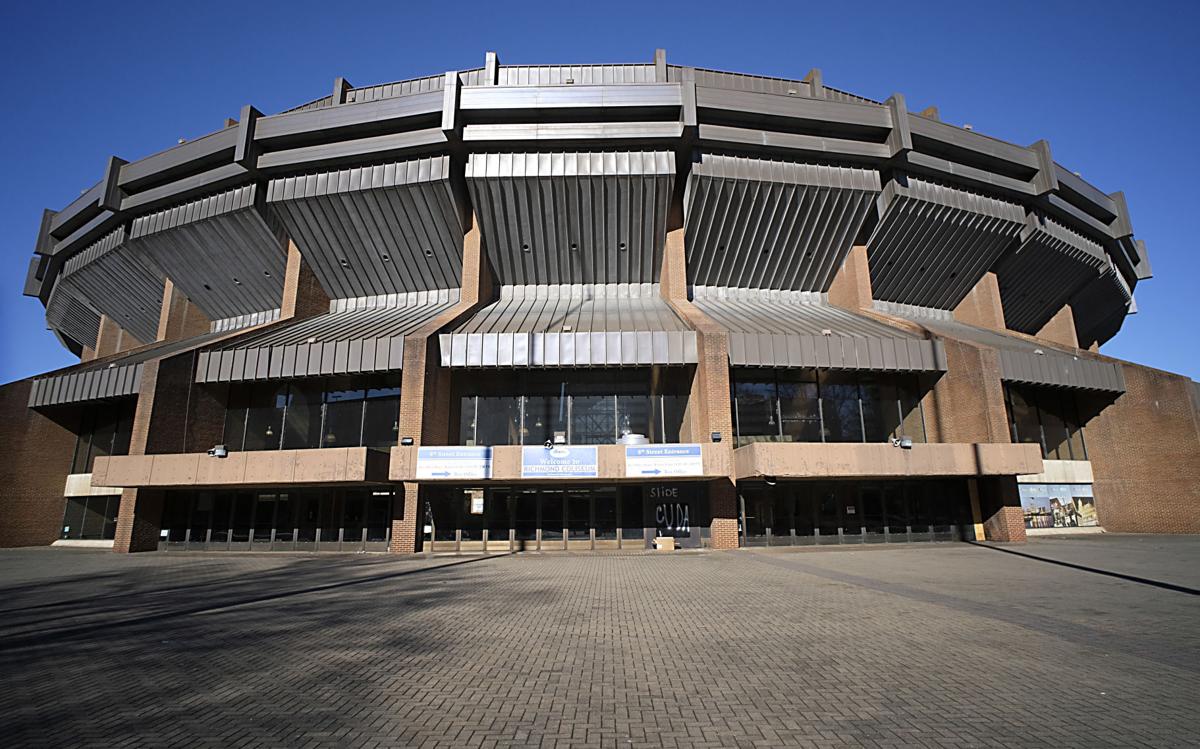 City planning officials last Monday introduced a draft plan for the downtown corridor that calls for the demolition of the shuttered Coliseum and the creation of new public gathering spaces, apartment complexes, hotels and a new City Hall tower.

Unlike the massive $1.5 billion Navy Hill project rejected by the City Council last year, the conceptual plan sets out a phased approach to redeveloping underutilized and aging city-owned properties through a mix of development proposal requests and public projects.

“It is well past time we move forward with making this development a reality,” said Councilwoman Ellen Robertson. “As the council representative for this district, it’s painful for me to continue to see the most valuable real estate in the city sit blighted.”

The study area is generally bounded by East Franklin Street to East Leigh Street and North 10th Street to North Fifth Street. The goal of the plan is to restore downtown and raise more tax revenue by increasing the number of people who live and work downtown.

Maps included in the draft plan show a linear park spanning several blocks along Clay Street from the Greater Richmond Convention Center to around Ninth Street.

In a presentation to the City Council last Monday, city planner Maritza Pechin said part of the area where the Coliseum is located could be turned into a festival square or central gathering place that would complement new hotels and the convention center and give neighborhood residents a place to gather.

Pechin said the space underneath the Coliseum also could be turned into an underground parking garage to replace the parking lots that would be redeveloped.

“Generally, we’re talking about creating a dynamic place that attracts residents, employees and students,” she said. “One of the main ways we do that is through a grand park and open spaces ... that re-establishes this as a place you want to be; a neighborhood that has mixed-income and affordable housing, more hotel rooms for the convention center and an innovation district that provides employment and education in STEM [Science, Technology, Engineering and Math] careers.”

The plan estimates the redevelopment projects could add more than 2,000 new residential units across several buildings. A goal of the proposed plan is making at least 20%, or 400, of those units affordable to families making less than 60% of the area median income.

Pechin said the plan also would incorporate the development of a new GRTC bus transfer center that would replace the temporary plaza along Ninth Street. Other elements of the plan include the creation of a new government center.

Several council members said they appreciate the focus on affordable housing, though some said they would like to see some more ambitious goals that would encourage more Black people to live downtown.

According to the plan, the population in the two census tracts in the study area has nearly doubled from 3,812 people in 2000 to 6,688 in 2019. In that same time, however, the proportion of Black residents has declined from 52% to 34% during the growth period.

“I promise I will not vote for anything until there’s a plan that includes not just Black folks renting ... but also owning homes,” said Ninth District Councilman Michael Jones.

Some of the ideas described in the plan are already in motion.

The first phase of the plan is the upcoming redevelopment of the Public Safety Building. In March, the City Council agreed to sell the property at 510 N. 10th St. for $3.5 million for a $325 million redevelopment project involving VCU Health, The Doorways, Ronald McDonald House Charities and a development team that includes associates of the Navy Hill project.

The next four phases of the proposed plan are:

The draft city center plan shares some similarities with the failed project that the City Council rejected in earlier 2020 due to public pressure.

The Navy Hill proposal called for a 17,500-seat arena that would replace the shuttered Richmond Coliseum; more than 2,000 apartments and condominiums; a high-rise hotel; 1 million square feet of commercial and office space; 260,000 square feet of retail and restaurant space; renovation of the historic Blues Armory; a new transfer plaza for GRTC Transit System bus riders; and infrastructure improvements.

The mayor promoted the project as a way to replace the aging Coliseum, which opened in 1971 and closed in 2019, and revitalize downtown Richmond — a goal that Robertson said has largely eluded nearly every city administration going back at least 30 years.

Opponents of the Navy Hill project, however, said they were skeptical of the city’s plans for the creation of a special tax zone to help pay for it.

That zone, called a tax increment financing district, would have spanned 80 downtown blocks under Mayor Levar Stoney’s initial proposal to the council. The plan would have diverted $600 million in downtown tax revenue to pay back the cost of replacing the Coliseum.

Since the failed Navy Hill project, Henrico County officials in December announced plans for a $2.3 billion development project on 200 acres off Parham Road near Interstate 95 that would be anchored by a 17,000-seat arena. The development also would include 2 million square feet of office space, 280,000 square feet of retail space, 2,400 housing units and two hotels, according to a county webpage for the project.

To help finance the $245 million arena project, the development company plans to ask the county to establish a community development authority, which would issue tax-free bonds.

Plans call for the bonds to be issued in 2023 and would be paid over 30 years by using a portion of the additional real estate, sales and personal property taxes generated from the new development.

Richmond planning staff said they surveyed community members while working on the city center plan, several council members said more public engagement is needed before they are scheduled to vote on whether to endorse it later this year.

“I just feel like this summer isn’t enough time to get enough community engagement on this plan,” said Councilwoman Ann Frances Lambert. “I don’t want us to be rushed to get something ready by September.”

The plan and information about upcoming meetings can be found online at www.rva.gov/planning-development-review/city-center.

The Richmond Coliseum, which housed pro hockey, basketball, football and other teams for decades, was officially closed on Dec. 31, 2018. The potential for a replacement venue remains a hot-button issue.

A November 2017 aerial photo of downtown Richmond included the Coliseum, the Richmond Marriott, the Greater Richmond Convention Center and more. The Navy Hill redevelopment plan is anchored by a new arena.

An aerial photo showed downtown Richmond, including the Coliseum and the Greater Richmond Convention Center, within the footprint where city officials are again proposing redevelopment.

In early August, Richmond Mayor Levar Stoney (center) announced a proposal to replace the Richmond Coliseum and reshape a portion of downtown.